It was a dark and stormy morning.

No really – it actually was.

We went down to the beach last weekend to visit the Chris’ Aunt Kitty and Uncle Leo (famous around here for many things, such as Toenail Art and Crochet Shorts.) It was actually a month after our planned trip to visit them, but it had gotten washed out – literally – by the prediction of a bad weekend storm.

So of course, it’d be raining on the rain check weekend as well.

But I had high hopes. There was just a tiny strip of rain that looked like it would be directly over their house for hours. Which meant that if we got out for adventure, we’d escape the rain!

Fort Morgan Historical Site is on our list of Alabama History field trips, but we’re not chronologically there yet. We’re still hanging out somewhere in the murky in-between of dinosaurs and Native Americans, and I really don’t want to mess up the proper order of things.

But, Fort Morgan was semi-nearby. And there was NO rain there – for sure! And I’d heard it was a fun place to photograph. So I ditched my orderly morals and packed up the children and Aunt Kitty to haul down the 25 mile tiny strip of land between gulf and bay, between us and adventure.

We arrived and I was immediately filled with excitement. I haven’t been to Fort Morgan since I was 9, and all I remember was being bored and wishing I was at the beach instead.

To get into the fort, you have to walk through a bricked tunnel in the hillside: 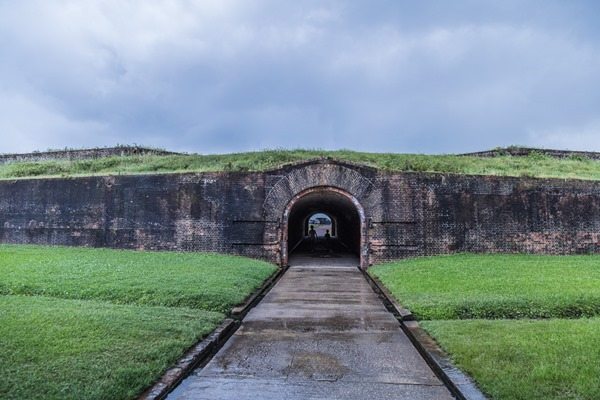 Yes, those are my children descending into the fort alone…way more excited about this adventure than their mother at their age. 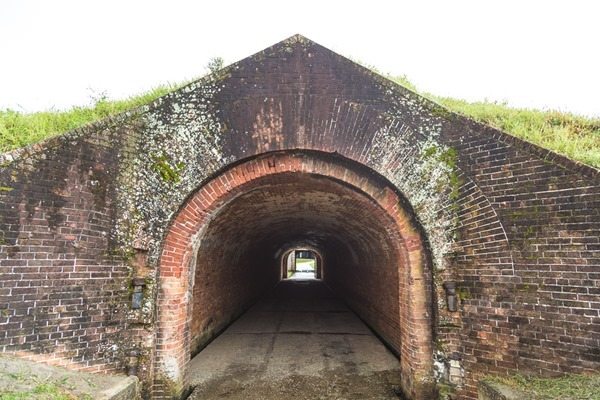 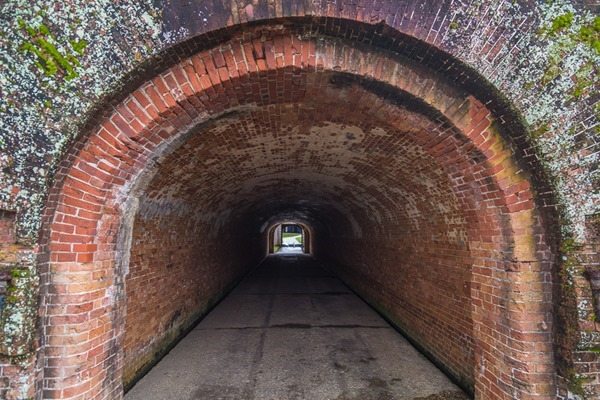 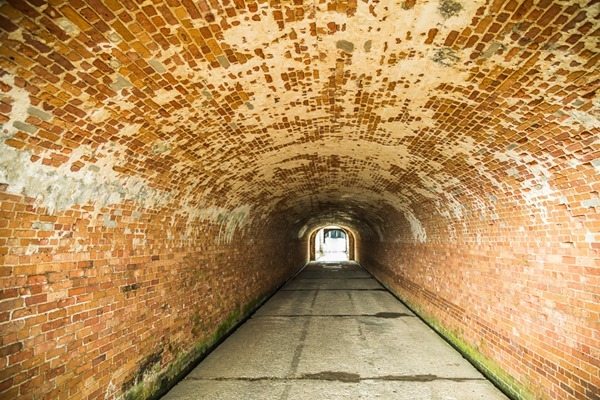 Then there’s a small courtyard with creepy windows that almost certainly had ghosts fleeting behind them, 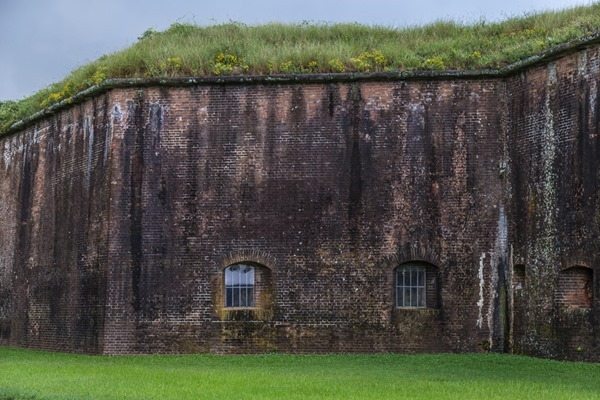 Then you walk through this entrance to the actual fort. 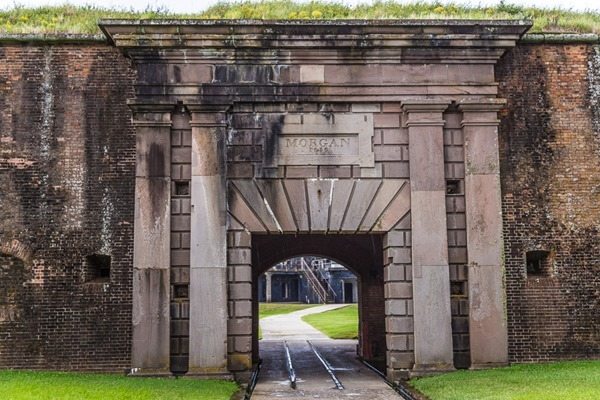 Fort Morgan was completed in 1834, after the War of 1812 revealed weaknesses of protecting our shores from naval fleets. It was later commandeered by the Confederate Army during the civil war, and was the site of the Battle of Mobile Bay. It kept being abandoned then reused all the way through World War II, when they trained there to counter the threat of German U-Boats in the Gulf of Mexico.

But you don’t get the feeling that it’s been in use anytime in the past 200 years when walking through its halls. 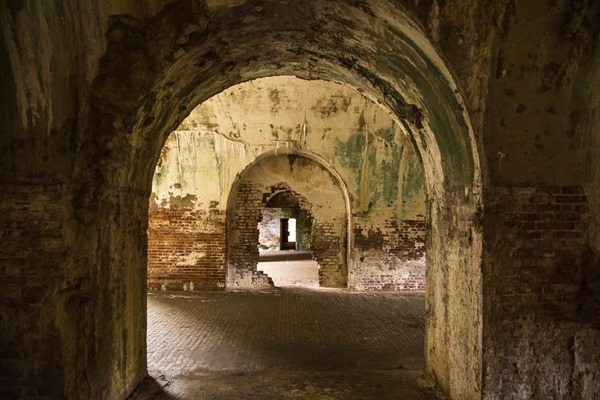 You do, however, get the feeling that there are a lot of former soldiers that still might reside here. 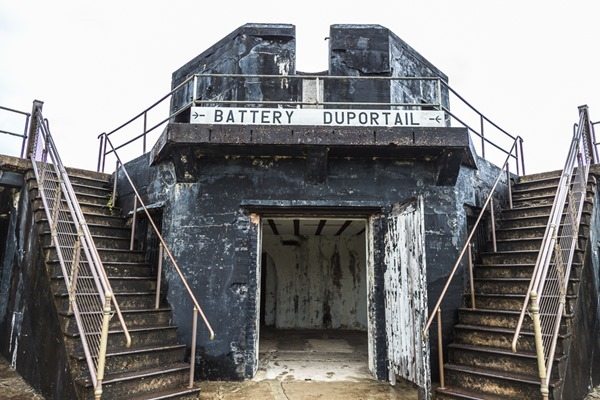 I’m not opposed to the idea of spirits and ghosts being a real phenomenon, especially since multiple members of my own family have had so many encounters with them. And this seemed like just the kind of place that one would meet a friendly ghost or two.

The fact that it was built in the shape of a Masonry Star (or Pentagram, depending on how you look at it) really adds to its creepiness. 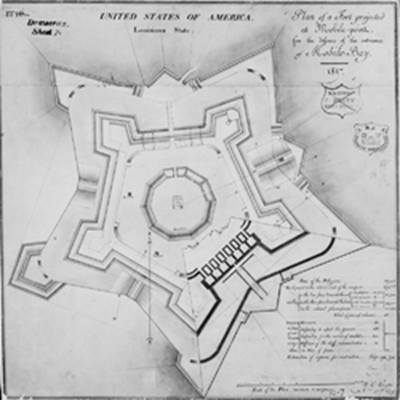 It’s ripe for making National Treasure 3: The Jewels of Alabama. Don’t you think?
Nick Cage could ROCK THIS PLACE.

Shadows and light intermixed at every turn, some rooms awash with windows, and some rooms dank and completely dark. 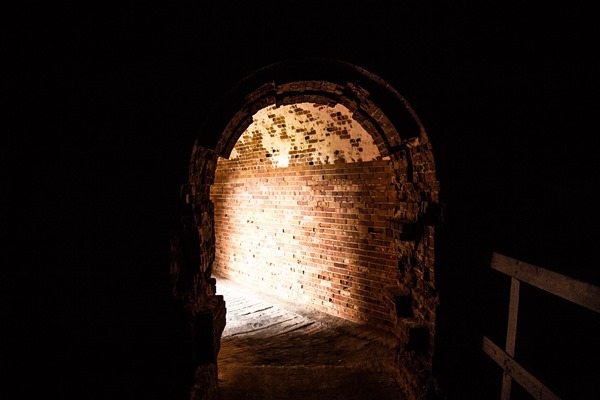 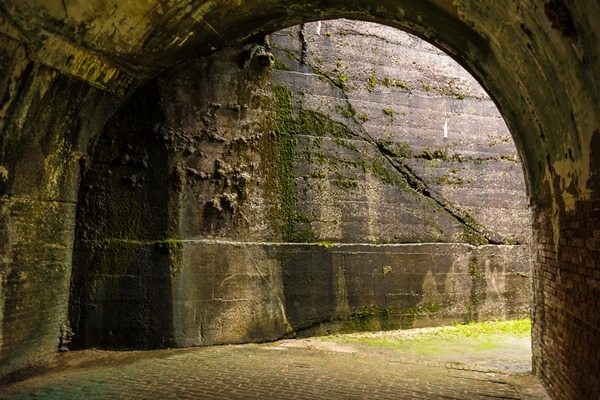 Steep stairs, dead ends, chained rooms, and giant artillery shells all give you the feeling that you’re not really supposed to be here, but yet, here you stand, exploring an entirely uncivilized relic of the past. 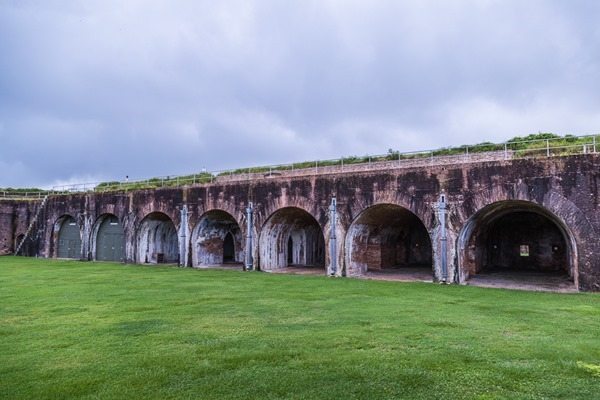 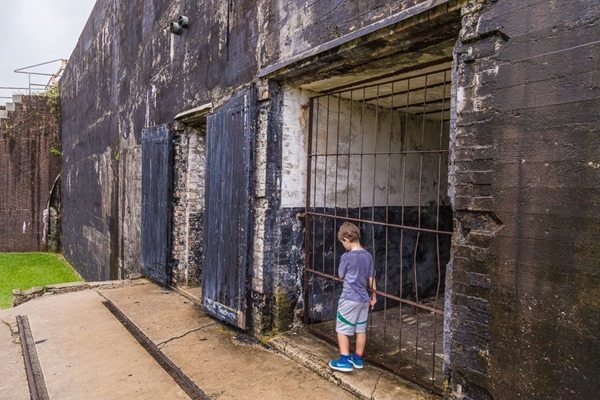 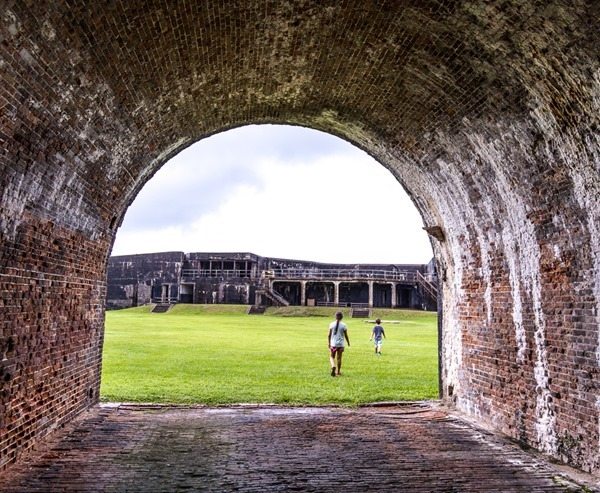 It didn’t take long for the rain to catch up with us – that tiny streak over Kitty and Leo’s house transformed into a soaking, wide rain. 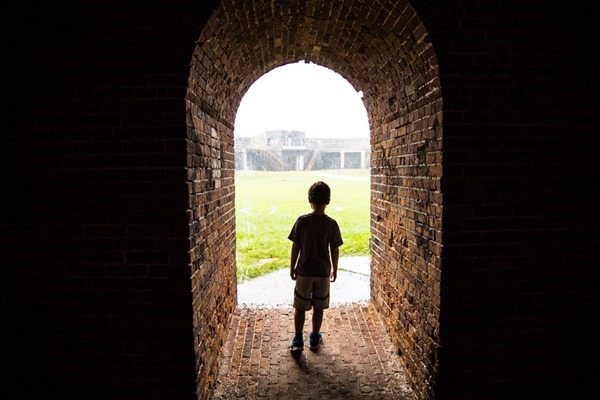 The 40 million bricks that make up Fort Morgan provided ample covering from the elements, so we explored the endless hallways. 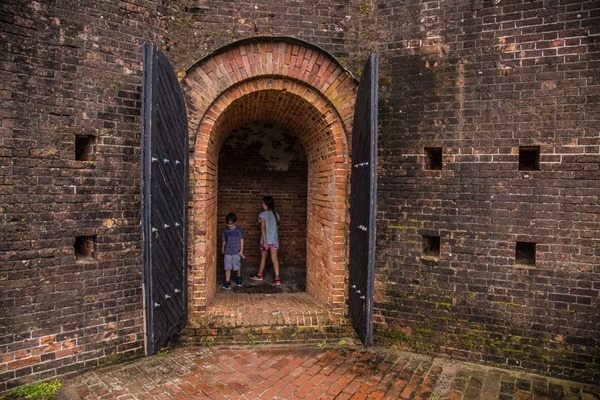 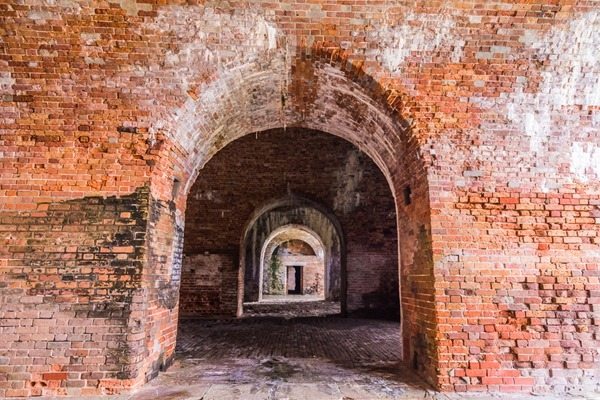 At a break in the storms, we climbed atop the fort to look around. 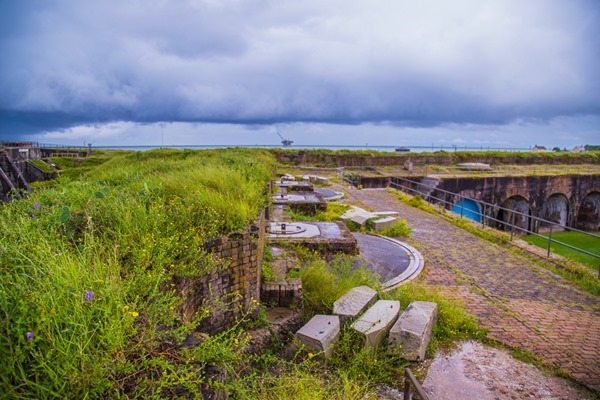 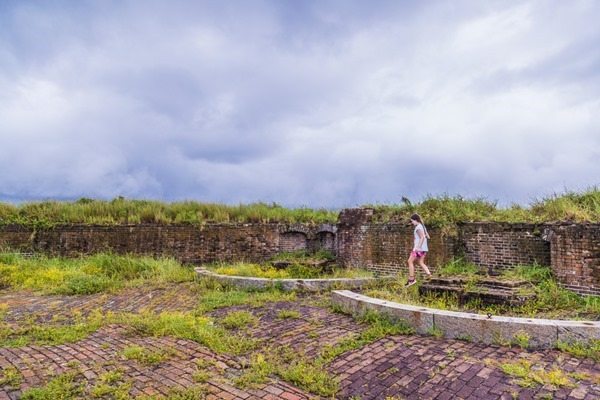 The kids loved imagining what it would have been like to be a sentry, 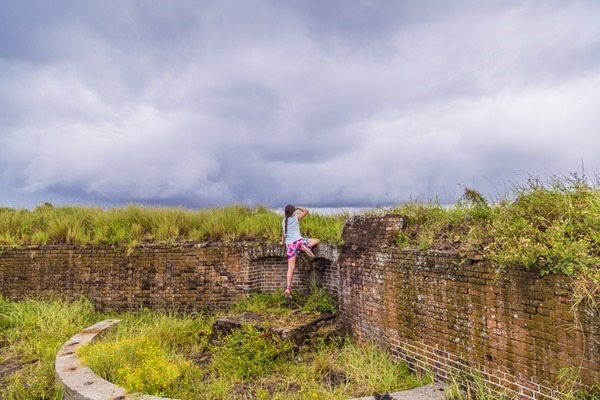 As well as artillerymen (and women.) 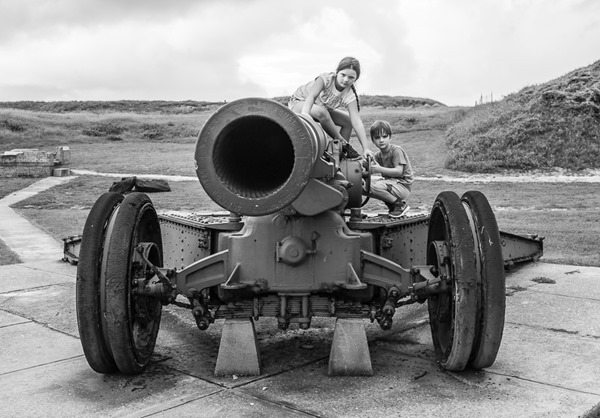 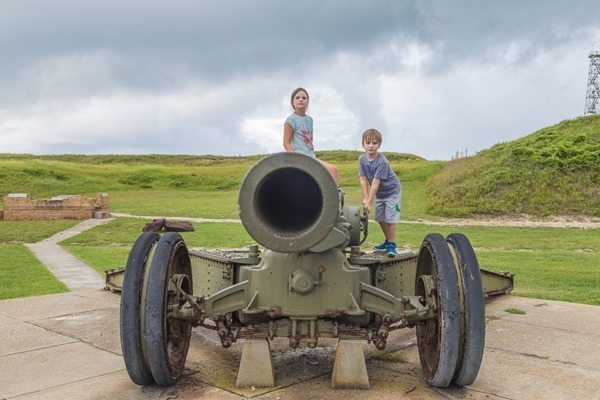 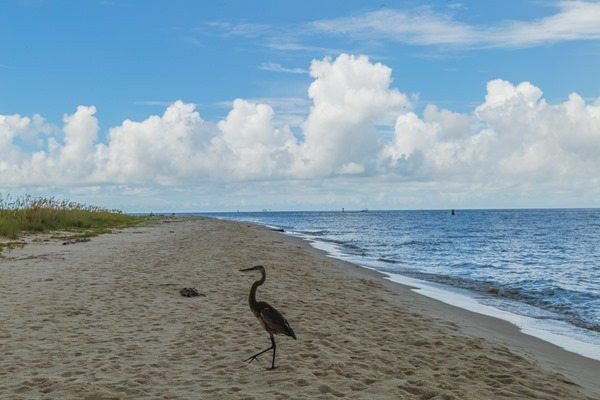 For a moment, we forgot the wars, the fighting, the deaths, and the total seriousness of where we were, and it just felt like we were at another part of our state’s beautiful beaches. 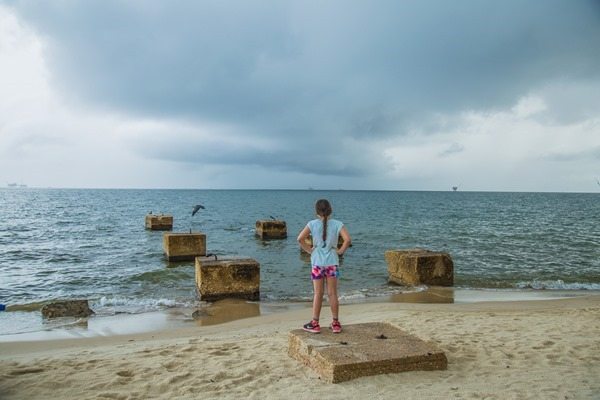 The deluge once again caught up with us, and left us completely soaked before we made it back to the car.

Later that afternoon, when we were snugly inside and I was editing my photos, I suddenly got that eerie feeling again – like there was so much history walking quietly through those hallways alongside us.

And literally, the next photo I came to was this one. 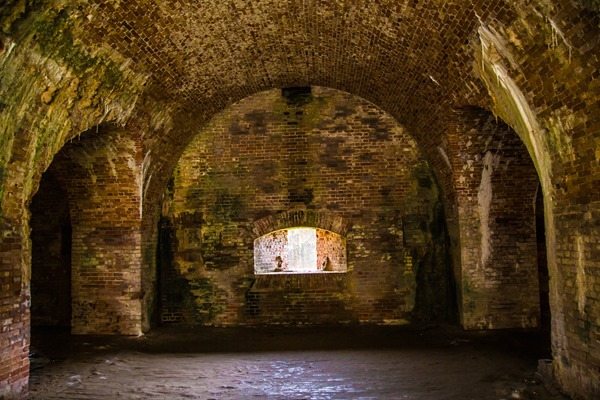 And I almost jumped out of my skin.

I recognized the profile in the window immediately – it was my son. His shoulders and head were sticking up out of that window ledge – a place he couldn’t have been – and that I knew he hadn’t been. But it looked just like him! 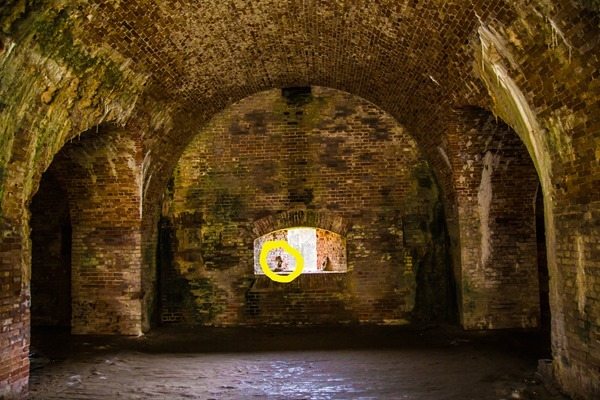 (Not to mention the creepy face on the wall next to him, but I wasn’t nearly as concerned about that.) 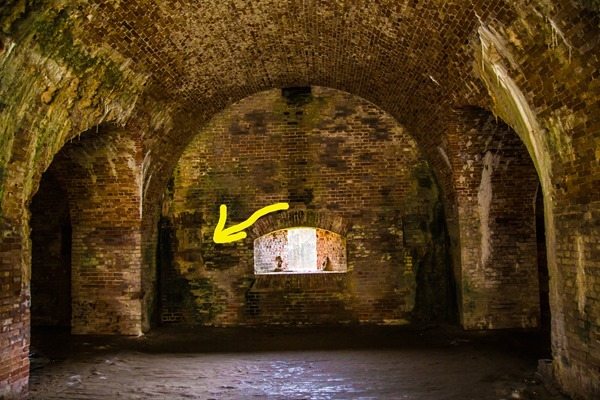 I started to slowly zoom in, trying to figure out what was going on. It was still Noah – whatever it was. 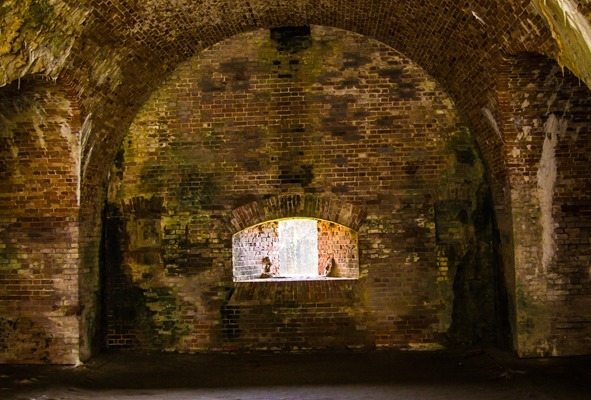 (In case only a mother can see it, here it is with an inserted photo of him that I took the same day. Can you see him now?) 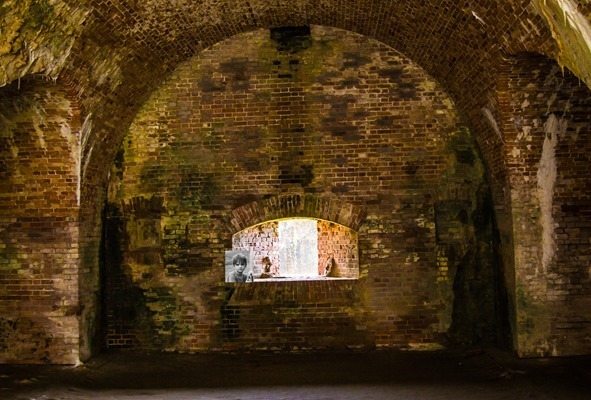 I zoomed all the way in, feeling all kinds of creepiness run through my spine…

Only to find that it was just a jut-out in the bricks. In the perfect shape to be an optical illusion of Noah, when seen far away. 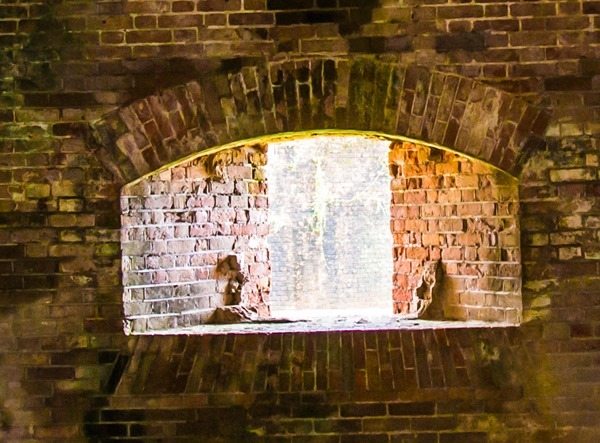 So what’s the moral of this story?

Explore. Go on adventures. Your kid’s ghost is also out there somewhere. But make sure you have a hi-res camera so that you don’t freak the freak out for the rest of your life when you see it.

5 thoughts on “The Ghost of Fort Morgan.”