“Not at all creepy.”

Our resort had a spa. The upcoming sign is not from our resort.

In fact, it was in front of a roadside tent shrouded in bedsheets. 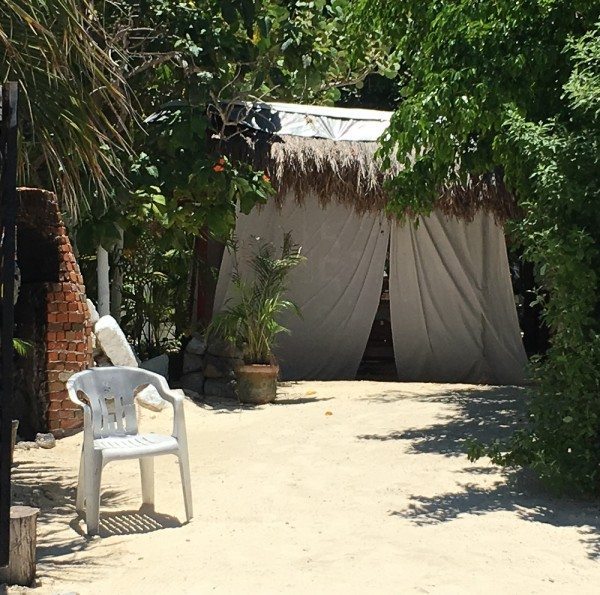 As in, park your moped here on the sidewalk for a moment and follow me into my dark hole between the sheets for a …. 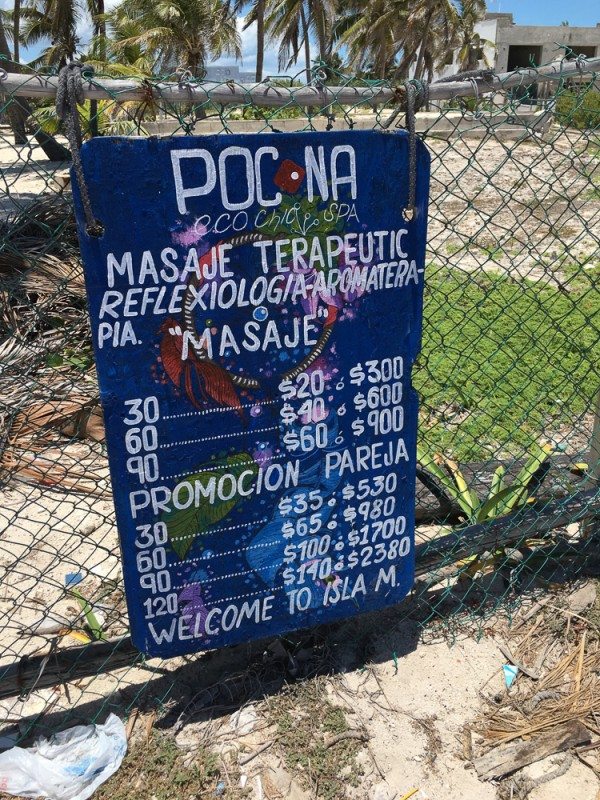 Yes, they even know how to use suspicious quotation marks in Mexico.

The Solution to Our Problems.

I found the antithesis to Birmingham’s favorite graffiti artist… 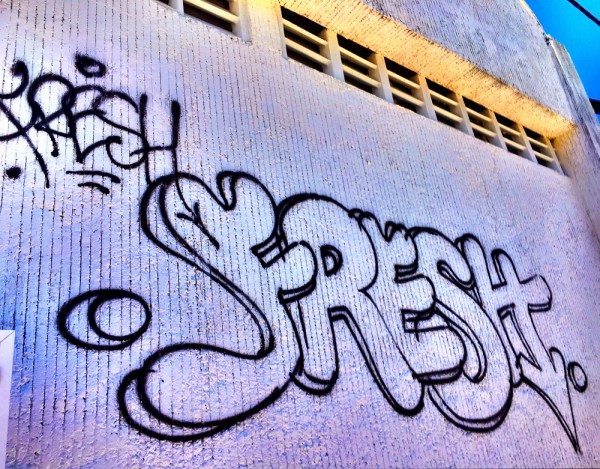 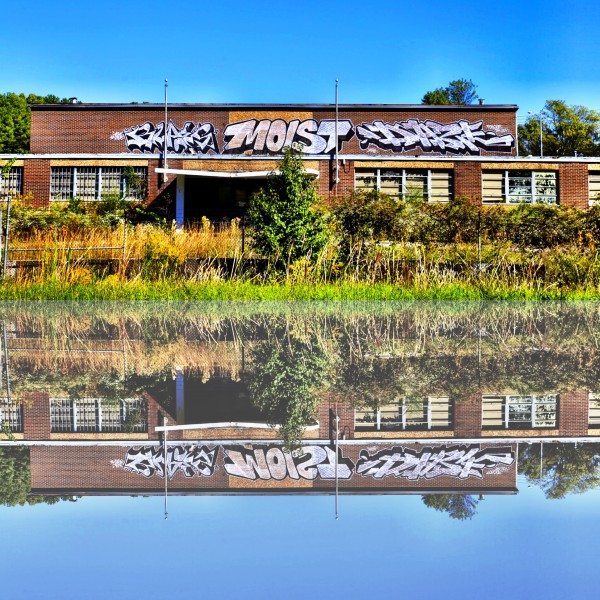 On the day that Chris and I ran towards town, it was a tricky route for me.

First of all, I’d made the mistake of trading in my capri running leggings for shorts. It was hot and humid and I was desperate enough to attempt it. But the thing is, if I run without separating them with a double layer of spandex, my two inner thighs are mortal enemies and fight like siblings that have been in the backseat together for twelve hours.

Second of all, the sidewalks were insanely noncompliant to any and all proper building codes.

So between my bickering thighs and maneuvering the sidewalks whose curbs were sometimes nearly waist-high, Chris got significantly ahead of me.

And so, I found myself running virtually alone in downtown (Island) Mexico.

And right as I was passing this gorgeous wall, 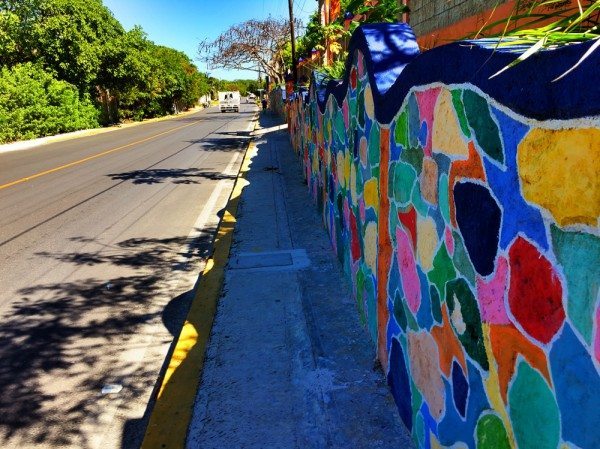 A dump truck passed me full of male construction workers.

And one of the stuck his head out the window and…

As in, he made loud, repetitive, bulldog-ish barking noises at me.

And that’s how I learned that Cat-Calling is the boring American way.

I can’t wait to go to Europe and get Gerbil-Called.

Living Without Mommy Guilt: What REALLY Made It Paradise.

There wasn’t a trace of Mommy Guilt on Isla Mujeres. There were 14,000 Mexican residents, and from what we could tell, none of them owned a car and all of them had children under the age of three.

What they did own were mopeds.

And they weren’t for solo trips. They were the family car.

It was completely normal to see…

There was no five-point LATCH system.

There were no Mommy Blogs furiously writing guilt-laden blog posts.

(“The Time I Tried to Drink my Baby Instead of my Beer While Driving 45mph on a Moped.”)

There were no Playdates where Moms compared their children’s nutrition, pooping schedule, ability to sound out letters, and general brilliance.

Children walked to and fro school with no adult to make sure they looked both ways.

Tiny schoolchildren regularly ran out into the road (dodging Mopeds and Beers and Babies) to rescue their soccer ball from their playground that had long lost its retaining wall. 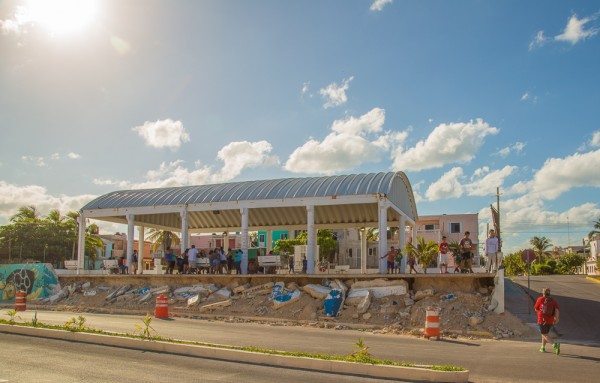 MOMMY GUILT DID NOT EXIST ON THIS ISLAND.

And, shockingly enough, every child was happy. No child cried. No wrecks were witnessed or in evidence. Police were rare and unneeded.

And EVERYONE WAS JUST FINE.

This. This is why I want to move to Mexico. I want to buy myself a moped and throw my carseats* and my Dr. Sears Parenting book into the ocean.

The Art of Sales.

We enjoy a taste of tourist-kitsch, so we visited the gift shop area a couple of times while we were there. 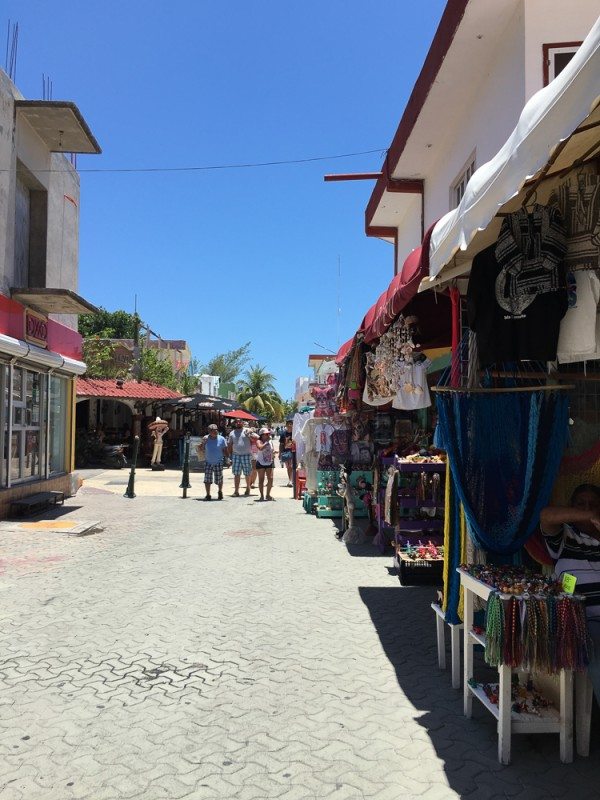 They all boasted of the identical items, including these bags that were most certainly licensed by the proper entities, 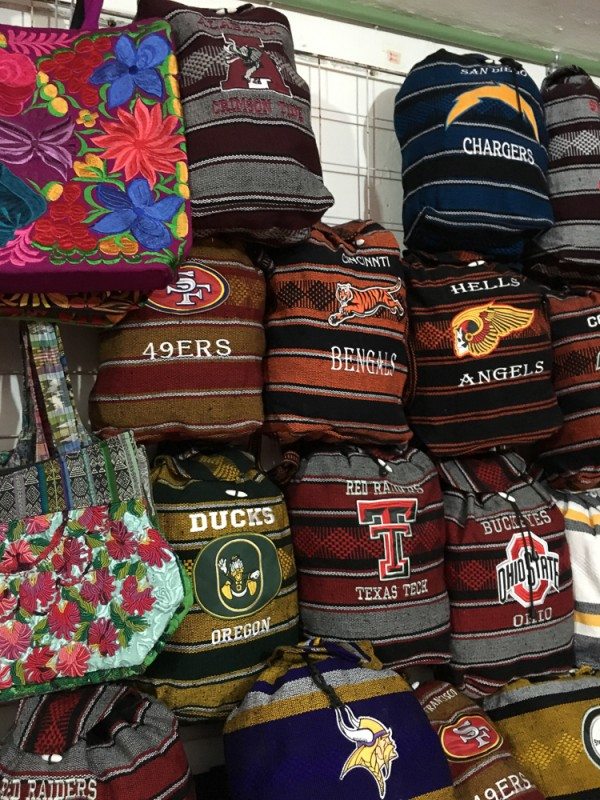 And piles of dead people. 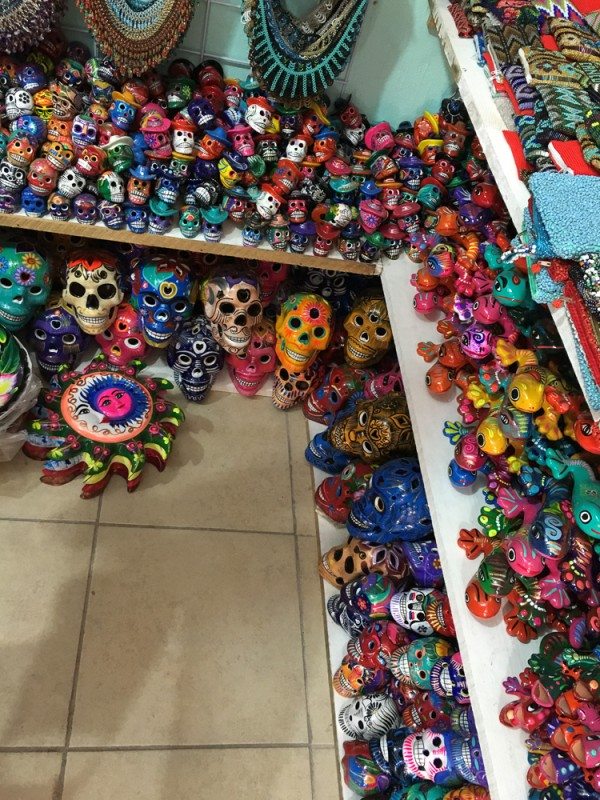 Since all of these shops were identical and there were dozens of them, the salesmen would get creative with their tactics to get us in the door.

Such as the man, in the exact tone and timber of the owner of Oaken’s Trading Post and Sauna, yelled out, “YOOO HOOO!!” We couldn’t even see him or his shop – they were down a dark alley. His Yoo Hoo was giggle-worthy, but not convincing.

And then there was the shopkeeper who preferred a direct approach. “Hello there sir! Come into my shop and let me help you spend your money!!”

Why not just say what you want. We all know it anyway.

Our resort was all-inclusive, and they definitely put out an impressive spread for breakfast and lunch, and had a nice menu for dinner. (The best part of breakfast was that they had a huge vat of homemade Nutella to PUT IN YOUR OATMEAL. Do this tomorrow, people. You will thank me.) 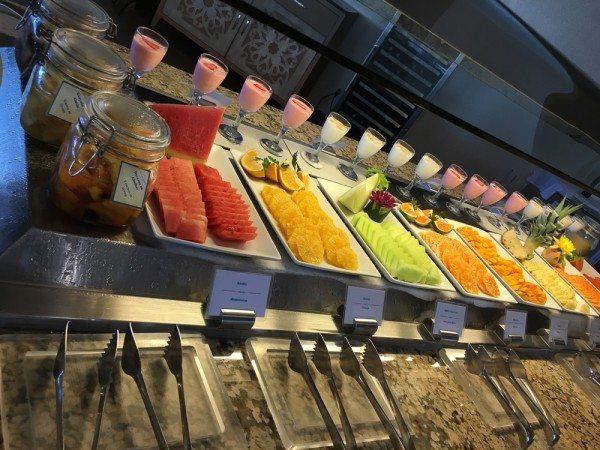 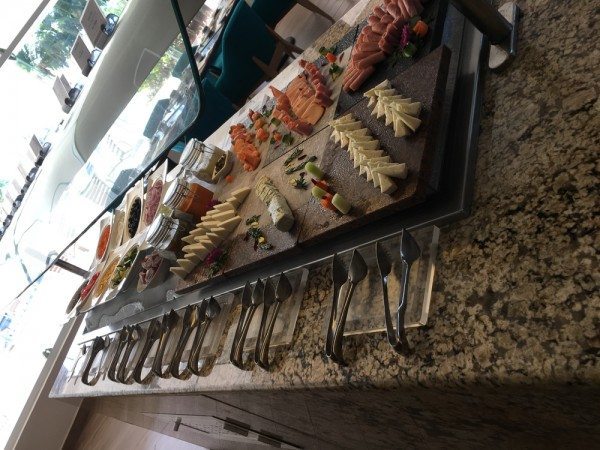 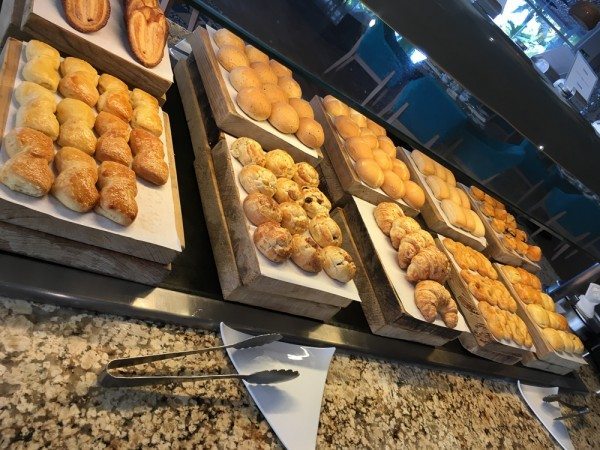 But the interpretations were sketchy and endlessly entertaining.

Such as the night that I ordered “Apple Figure” just to see what the figure was. Turns out, they meant “Apple Sculpture.” 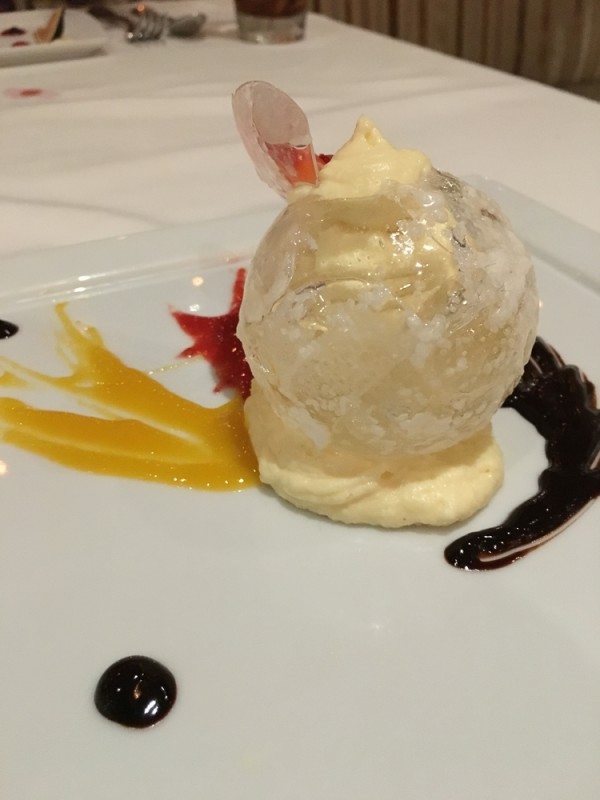 But my favorite was on the breakfast bar every morning. 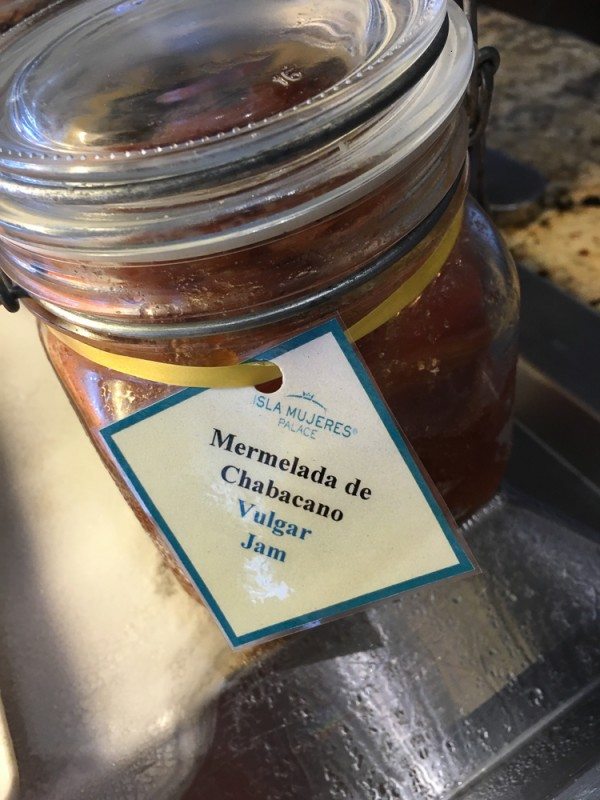 Because really, is there a better way to start a new day than to rub some vulgar jam onto your biscuit?

I tried it the very first day because our hispanic friends told us – “Try everything – ESPECIALLY the weird stuff!!”

It was quite tasty and not at all vulgar. So I sent our friends the picture for translation.

Turns out, Chabacano can be translated as vulgar…or it can mean apricot.

I think what they were going for was apricot.