As our plane was coming down in Cancun and I saw all of the scrubby, foreign trees lining the city, I immediately began dreaming of all of the exotic, wildly colorful snakes that must be in those trees.

I was so excited over the prospect of spotting one because I absolutely adore reptiles and amphibians. It’s not “I love reptiles and I want one as a pet”, but more of an “OH-MY-GOSH I AM LUCKY ENOUGH TO HAVE SPOTTED ONE IN THE WILD!!!”

My reptile/amphibian adoration has definitely ramped up in the past few years in correlation my hiking obsession. It’s like a treasure hunt thrill to spot a lizard, or even better a frog, or even better a turtle, or even better a snake. It’s as if I saw something beautiful that I wasn’t supposed to see, and it makes me supremely happy.

However, I did not spot a single snake while I was in Mexico.

I hadn’t even considered the complete covering of Iguanas there. I really had no idea.

On the morning of day two, we went on a run after breakfast. It was actually our second run of the trip, as we had gone on one soon after arriving. But that run had been right after an extremely rare island thunderstorm, so all we could see on that run was the massive amounts of humidity-induced sweat waterfalling onto our eyeballs.

Oh – and a dead fish on the sidewalk. But I don’t know if that counts as a nature spotting. 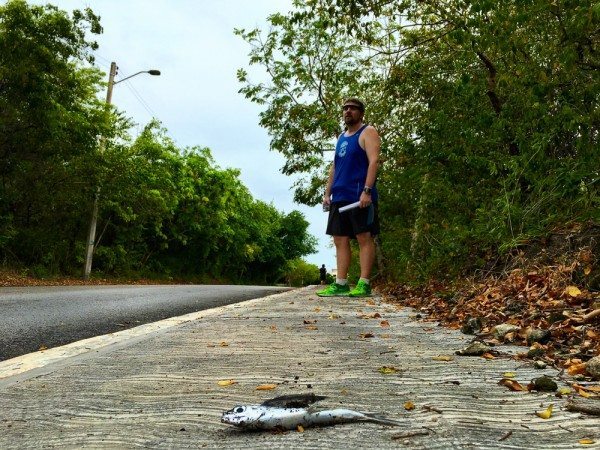 (But it did count as a Mexican Roadkill sighting for my friend Tanya.)

But that second morning, we set off down a dead end street. It was quiet and residential – perfect for experiencing the island on foot.

About halfway into our run, I spotted him.

I squealed and slid to a stop and ripped my phone out of my arm band. I couldn’t believe my luck. This felt rarer even than spotting a snake. It was absolutely chart-topping on the I-spotted-a-reptile-in-the-wild continuum of thrill. 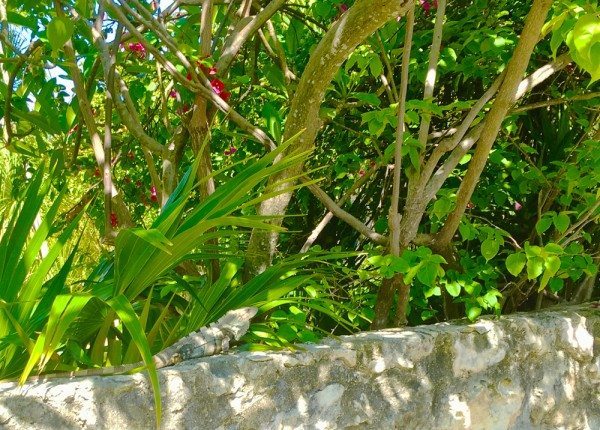 I know that he doesn’t look dinosaur-sized but photos don’t do size justice and things always look more impressive on vacation.

I hung around and tried to get close enough to pet him, but he finally crawled down the other side of the wall, disgusted at my tourism.

Later that afternoon, we set out on a photo walk. I wanted to take some pictures around the island, hence the walk – so I could tote my big camera. But before we even got out of the gate of our hotel, Chris began pointing wildly and telling me to shush.

There were TWO iguanas on the wall along the resort driveway. A MASSIVELY LIFE-CHANGINGLY AWESOMELY HUGE one, and a smaller one, obviously being pursued by the MASSIVE one. 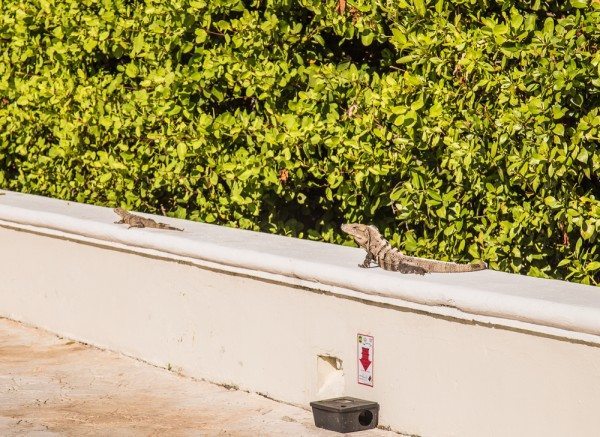 It was a romantic resort…who could blame him for trying?

But as soon as I grabbed my camera and crept closer, the pursued female took that as an excuse to scamper away.

Massive Dino Iguana was NOT amused by me ruining his game. 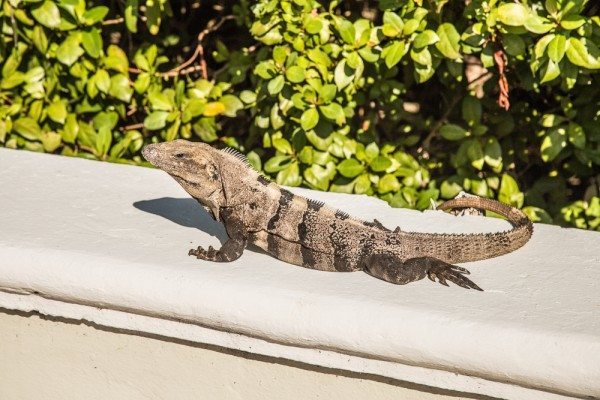 He puffed out his body and began grunting at me. 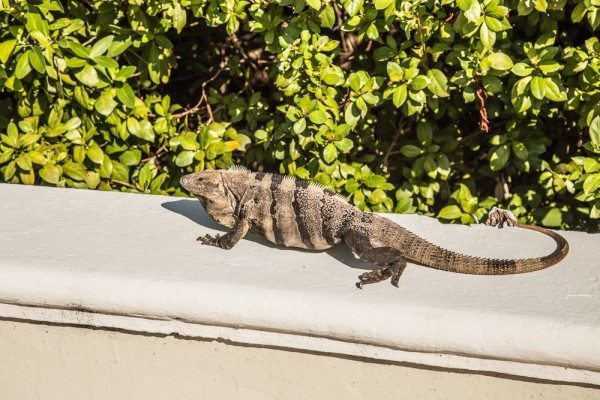 Chris was a few yards away (no interest in being eaten by a massive iguana) and asked, “Is that the Iguana grunting at you??” Yes, yes it is. 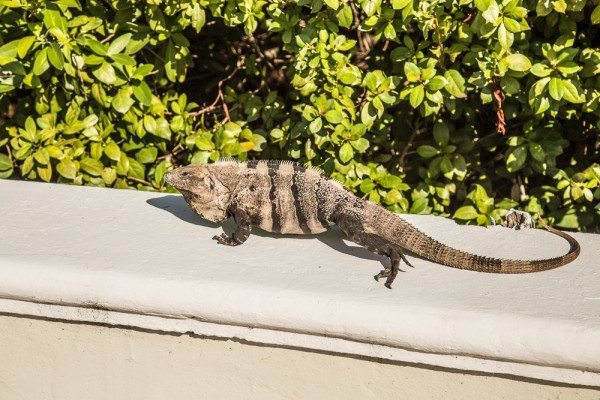 With every careful step I took toward him, he became more bowed up and in attack-form. He was NOT a fan of any human that would ruin his Lady Hunt like that. 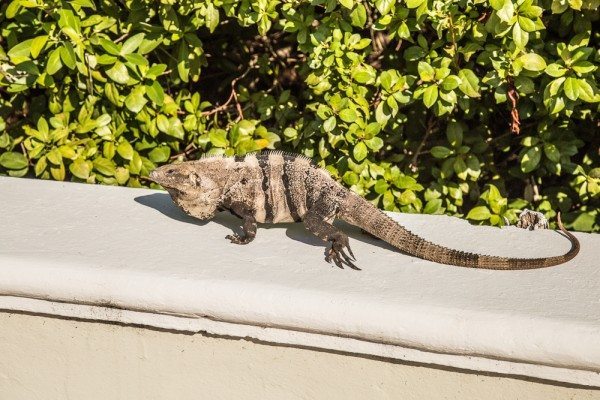 But I slowly inched my way in front of him and he relaxed his puffy muscles and just glared at me, letting me feel the full force of his ire. 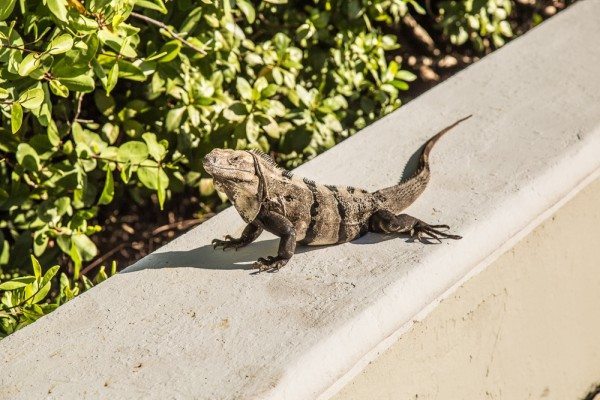 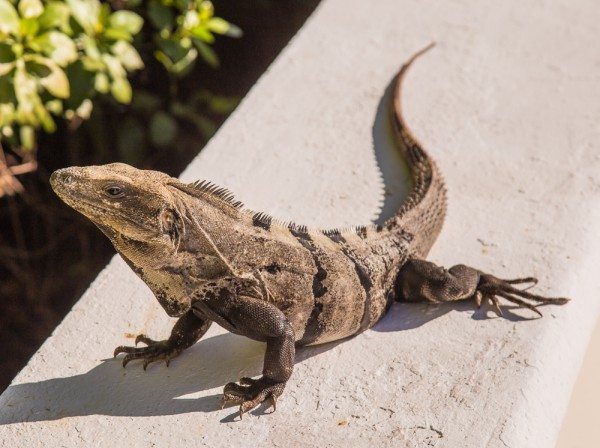 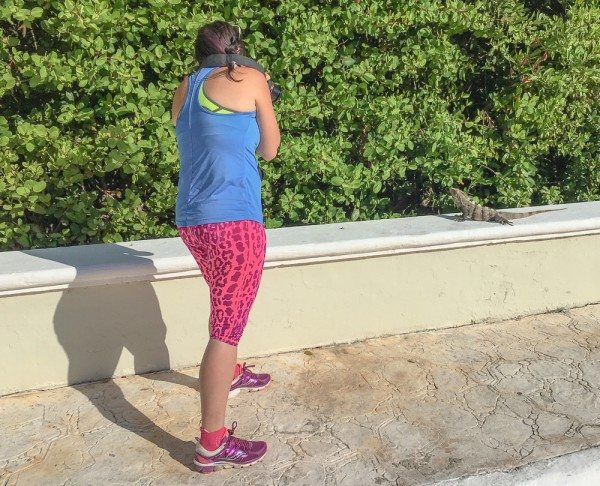 And plus, it would go well with his photography-of-my-photography collection – for him to show the children one day.

This is the time your mom stood on uneven igneous rock filled with living sea creatures to take a picture. She might have ripped her pants getting down there. 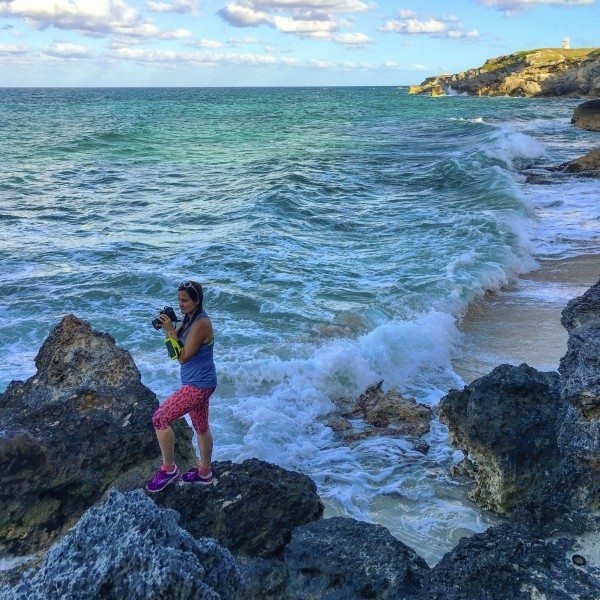 And this is your mother on the beach taking idyllic ocean pictures that would make all her Facebook friends hate her. 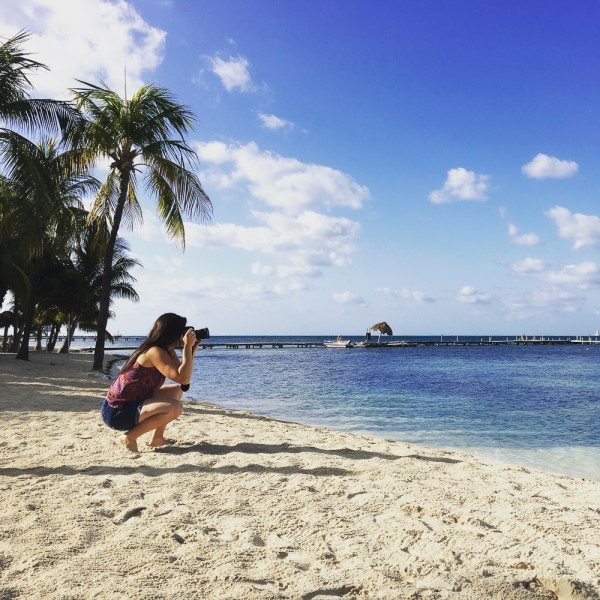 And this is your mother right before she nearly fell into the sea. 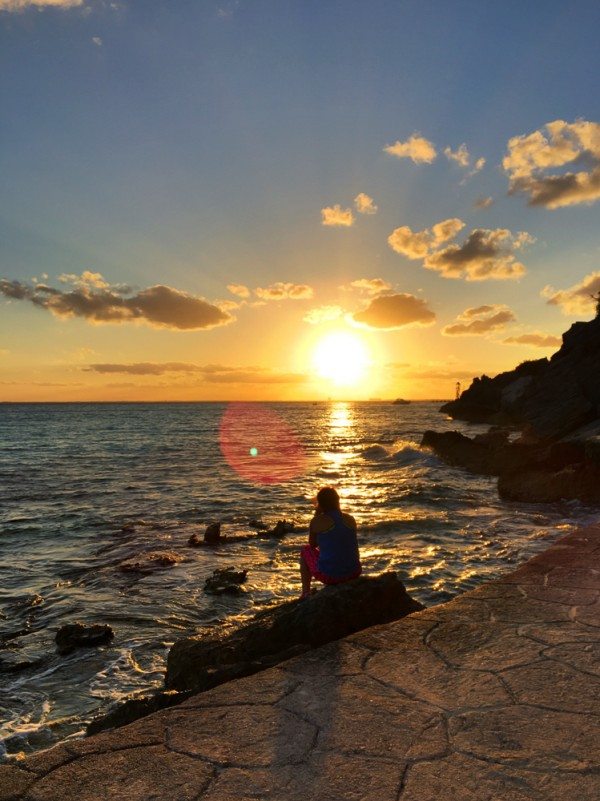 And this is your mother taking pictures of the very dinosaur that would momentarily eat her for dinner.

But he didn’t take me out.

When we got back to our hotel room and I edited my Angry Iguana Photos, I was even more taken by his charm. His fantastically creepy circle eyes…his spiny back…his bizarre ear holes. 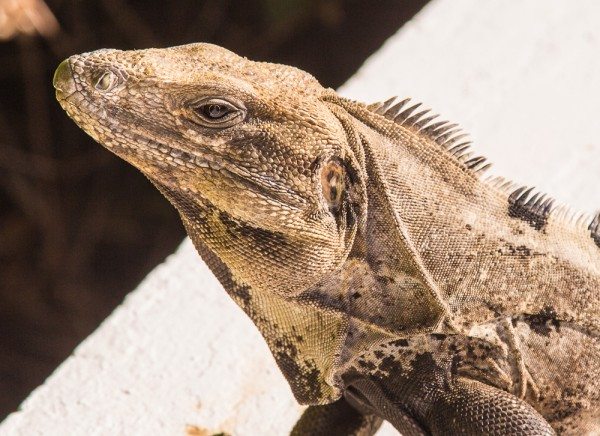 I was still under the impression that I’d been blessed to see some unusual creatures…until our run the next day. At which time I lost iguana count.

I saw this guy (the cinder blocks really puts into perspective his size, I felt,) 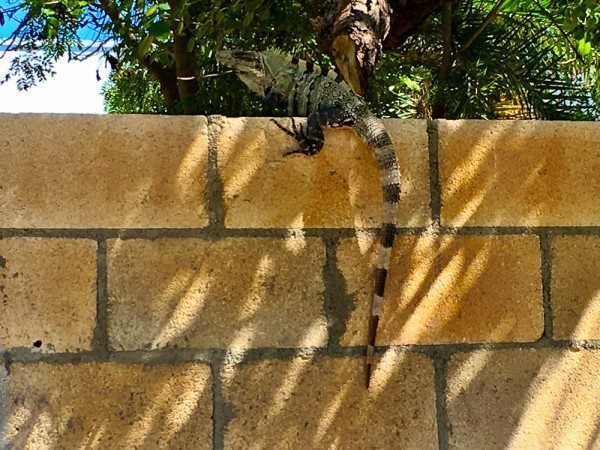 Then this massive guy, who was my favorite with his wall-coordinating green splashes, 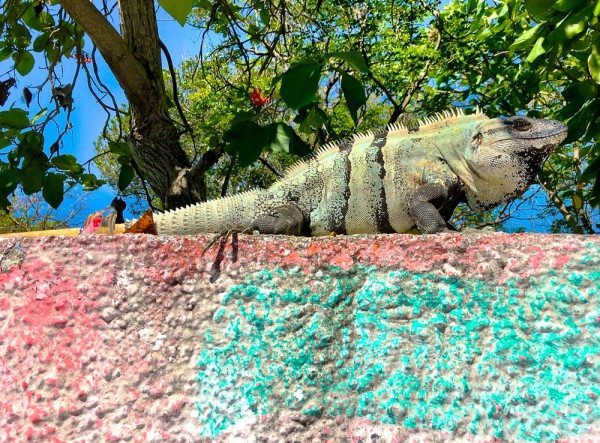 And because he puffed out, grunted, and raced me – me running alongside him on the sidewalk, him running on the wall. Until he slipped and nearly fell onto my head and I screamed. 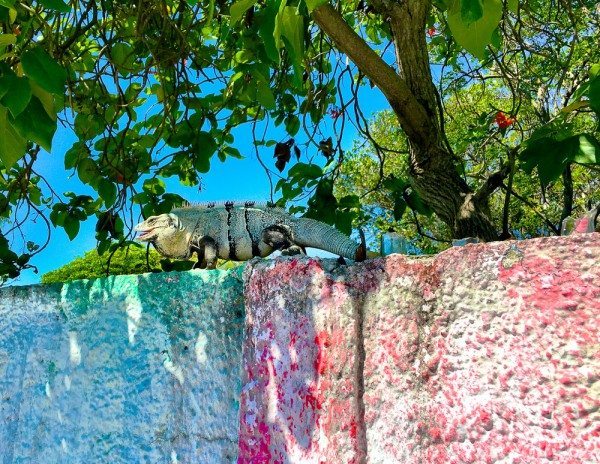 And then when we got to the other beach, this guy, proving once and for all that iguanas can enjoy a good view, too. 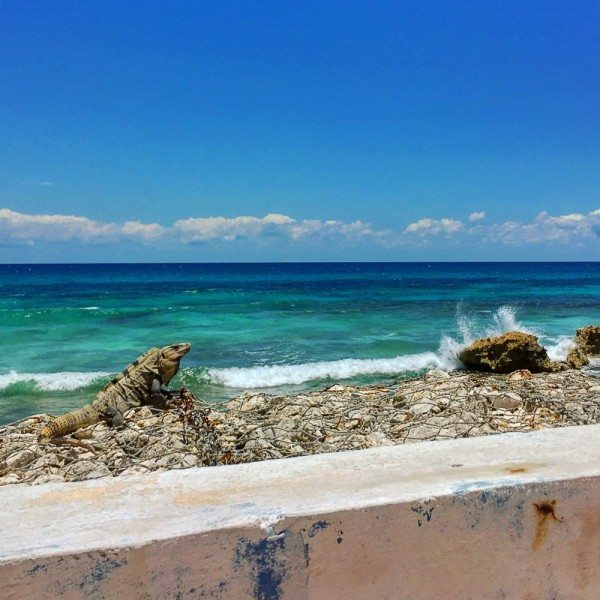 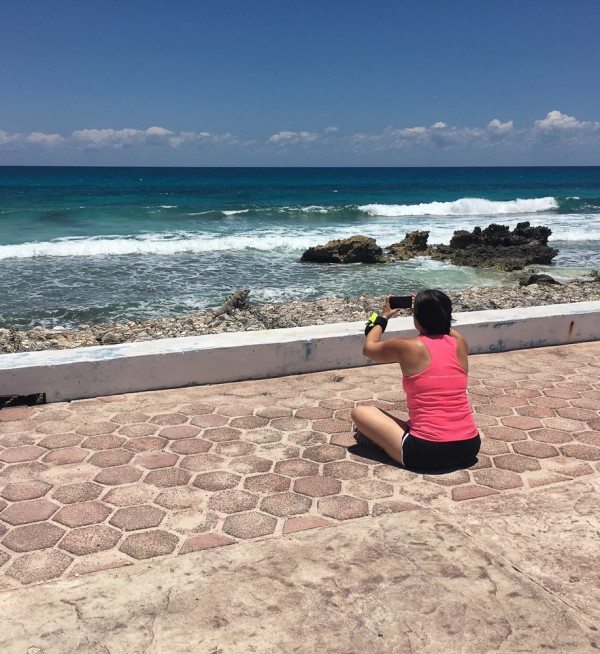 Chris noticed that there was yet another Iguana to the left, on the other side of the beach wall.

I walked over to check him out, and realized that this iguana was not, in fact, enjoying the view of the ocean. 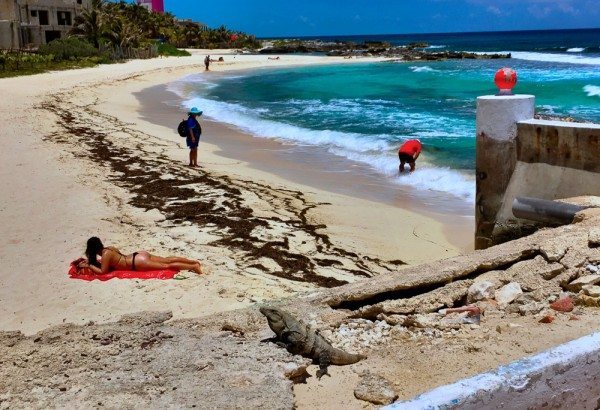 (Which if he was the same iguana for whom I ruined a date the day before, I guess he could have had some unresolved needs…)

I sent a picture of Creeper Iguana to Not-Crazy-Renee. 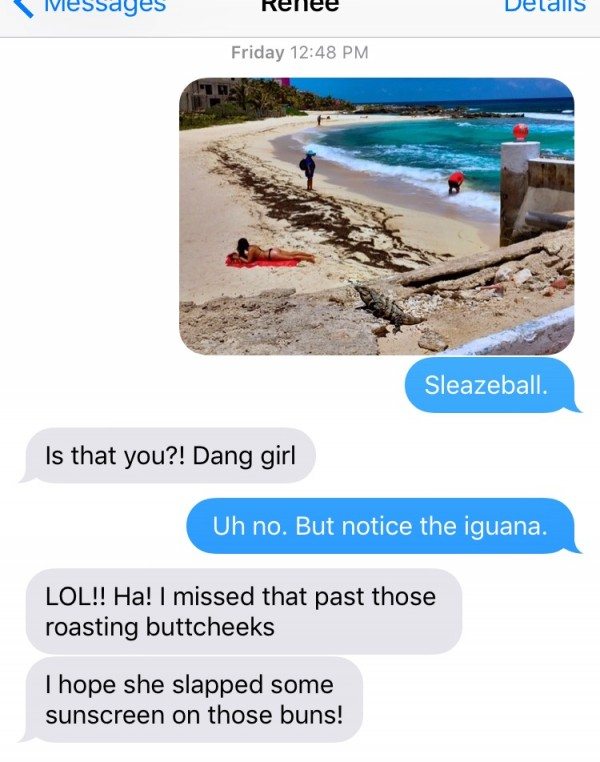 I assumed she was joking and moved on.

…Until we got back from Mexico and went to dinner with Renee and her family and the whole thong extravaganza came up and I discovered that NO – she had ACTUALLY THOUGHT that was me, and that my text was saying that Chris took a picture of me like a sleazeball. Like for reals my friend thought I went to Mexico and jumped into a string bikini thong and somehow magically acquired perfectly seared brown buttcheeks. In fact, she thought I was just reiterating how nice my angles were when someone that was not her photographed them.

It’s good to know what your friends really think of you.

But this story isn’t about Not-Crazy-Renee. It’s about Iguanas.

(Or are all stories about Not-Crazy-Renee? I’m not sure.)

We took a cab ride back from downtown that day, and I decided to count Iguanas. On the three mile ride, I saw six, just hanging out on the sidewalks and grabbing some sun like a Mexican buttcheek. 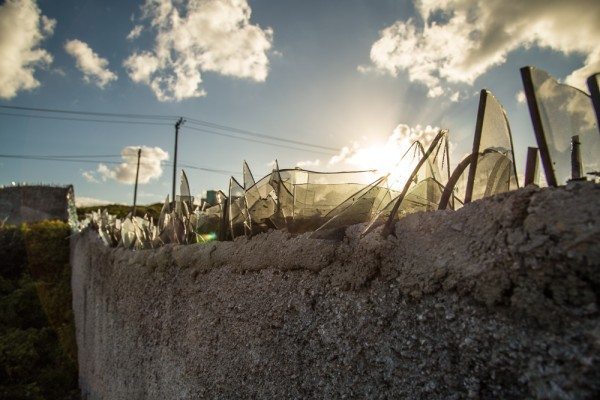 On our final night in Mexico, we took the best run of the entire trip. It was sunset, and we explored fully the meandering, and in some places crumbling, trails along the oceanfront. 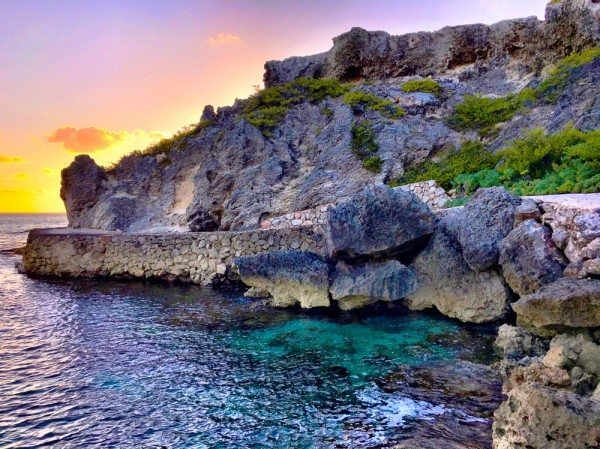 I took several kinda-official-stairways up to caves. Each cave had multiple holes in the wall where Iguanas poked in and out. I lost count of the iguana sightings early on in the epic run.

The walkway even went through a cave itself, where, on the other side, was an iguana, just watching the sunset. 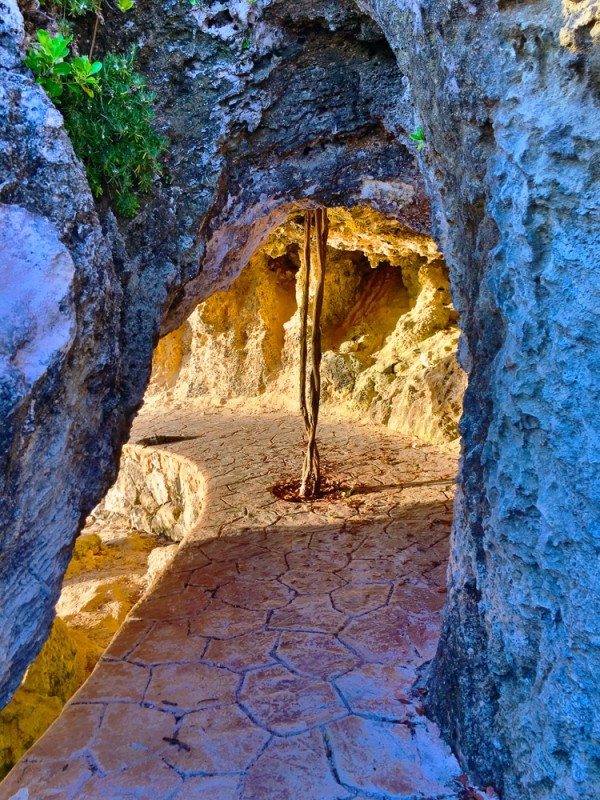 I sat down beside him and watched him watch the sunset. HE WAS MY FAVORITE IGUANA OF ALL TIME. 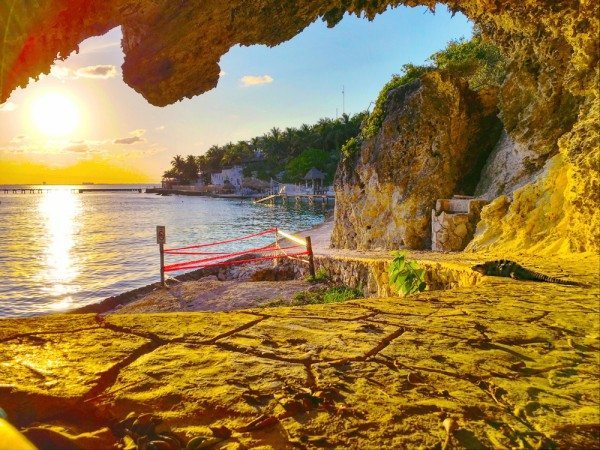 He and I became immediate soulmates. And I knew right then that I was meant to live in a place where Iguanas were as common as squirrels.

7 thoughts on “The Squirrel of the Caribbean.”