A couple of weeks ago, I shared 30 really cool places that the kids and I like to visit on hikes. But, regardless of the destination’s level of “knownness”, pretty much all of them are on the grid. They can be found on hiking maps, they’re not hidden, and they’re available for public use.

But since I published that post, various people have been whispering in my ear. “But did you know about this place? It’s kind of a secret though so you can’t publish the location online…”

And so the kids and I have been tracking down and finding some of the “secret” destinations in Alabama.

Why are they secret?

(Not you. Obviously not you. You’re not a jerk at all. But we’ve all encountered jerks. Or the evidence of jerks past.)

One thing I’ve been wanting to do with the kids for quite some time is a fossil hunt. I remember my Dad taking my siblings and I on a fossil hunt when I was a kid, and it is such a fond memory. We sifted through a giant quarry of slate, broke open rocks, and found plant and animal imprints. Alabama is one of the richest places to find fossils in the United States, but you have to know where to look – and therein lies the problem.

Fossil groups are famously secretive about their spots, and all of my internet searching proved useless when trying to find a spot to hunt. I even asked my parents where it was my Dad had taken us, but it was in a construction site that was long ago developed.

However, someone shared a spot with me recently. And ironically, it was five minutes from our house.

We went the very next day, and some of their leftovers were still there, giving us a great head start on our hunt. 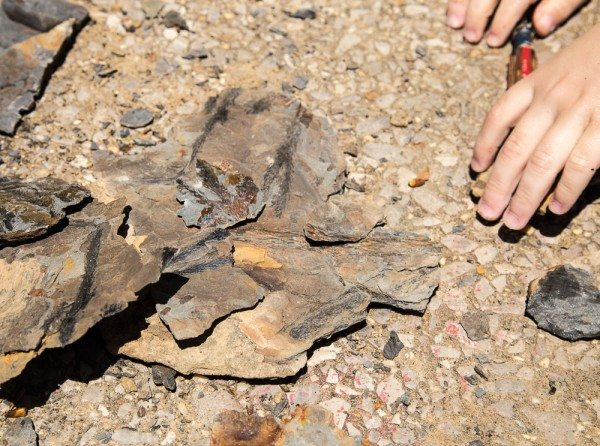 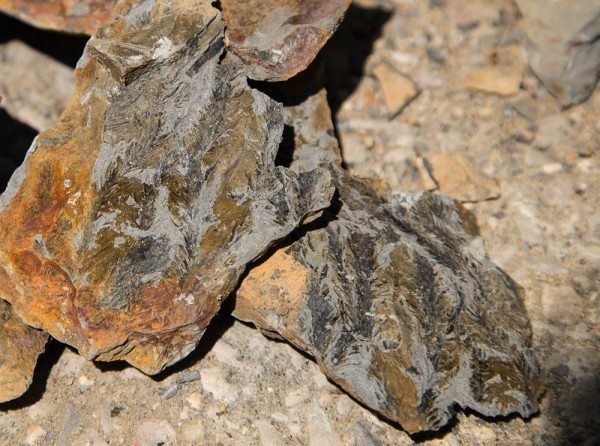 I was pretty excited. As were the kids – I mean their excitement lasted for like a whole three minutes and a half. 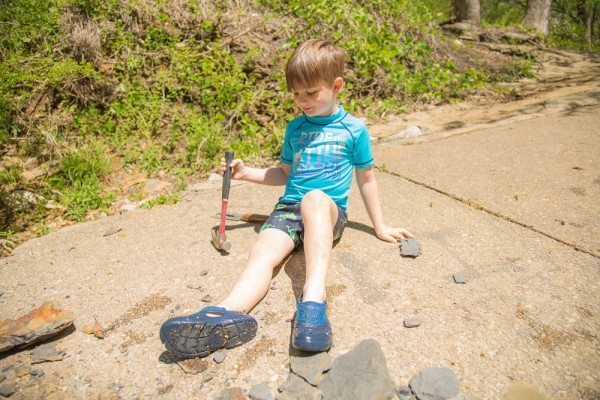 The spot was on a river, so I sent them out into the water to find more slate. 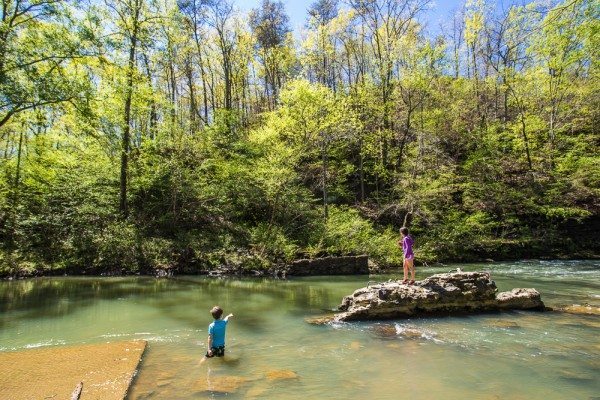 They were way more interested in bridge ruins, but did some rock-picking-up as well. 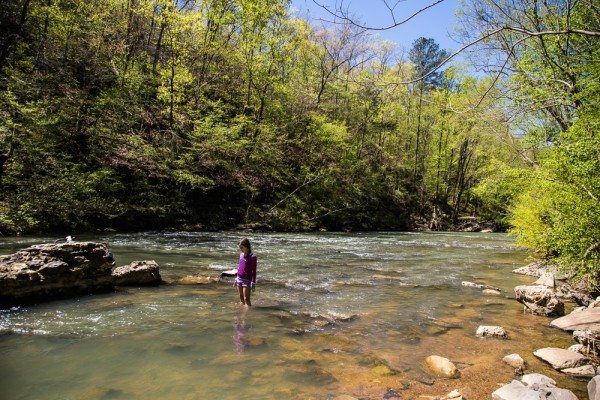 …Until Ali screamed and dropped something back in the water.

“AUGHHHH! I just picked up a giant jawbone with teeth still on it!!”

“Hold on let me get a sock to put over my hand.”

By the time she got back to searching, the jawbone could not be found. I even braved the cold water to see if I could find it, but apparently it floated down the river to greener pastures.

Every time Ali has told the story of picking up the monstrous jawbone, it’s gotten bigger. It is currently the size of a small elephant. Perhaps a Wooly Mammoth. But whatever it was, it would have been a museum piece. She’s sure of it.

We cracked a bunch of rocks and found dozens of fossils. Fossils are oddly hard to photograph, so you may just have to trust me. All were plants except for one small shell imprint – the circle on the middle rock. I swear – up close, they’re so intricate. I guess I’m just not a qualified fossil photographer. 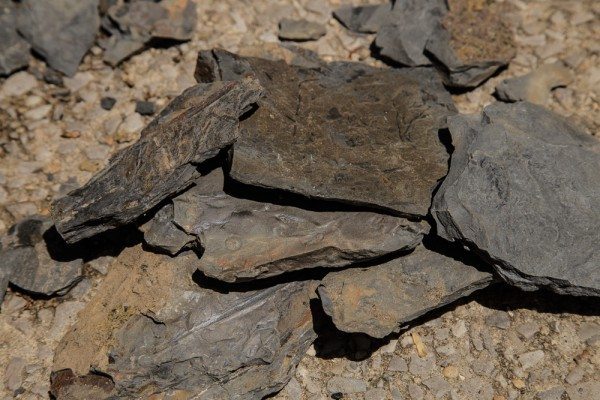 Another day, we set out to find a hidden quarry, only accessible by a cave, that a friend told me about. She gave me detailed instructions on how to get there, but since it was off the map, I was left to my own listening skills.

One particular sentence she said was important.

Because I took the second trail I found, and it was definitely the wrong one.

The trail went up a steep mountainside, as did the right one, but the wrong one was very nearly unclimbable. Especially for little legs. 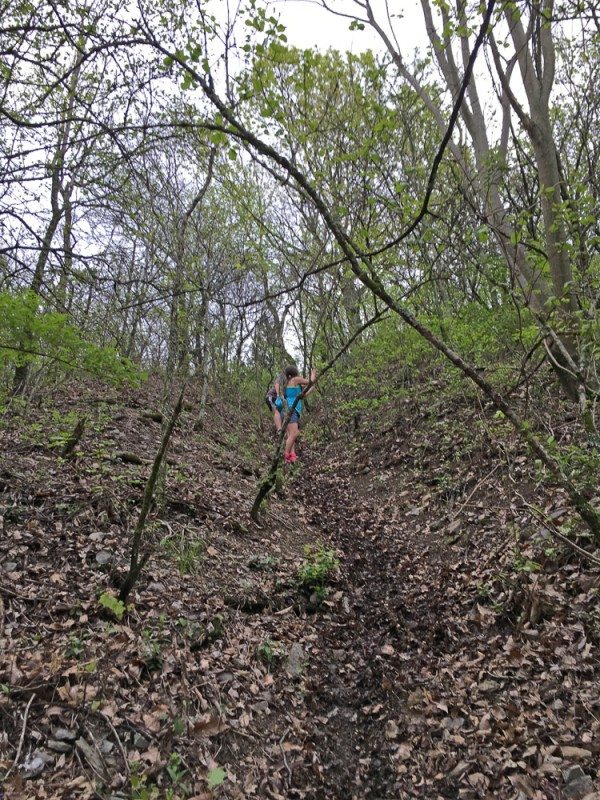 There was crying. There was slipping down the mountainside. There was a VERY muddy backside. 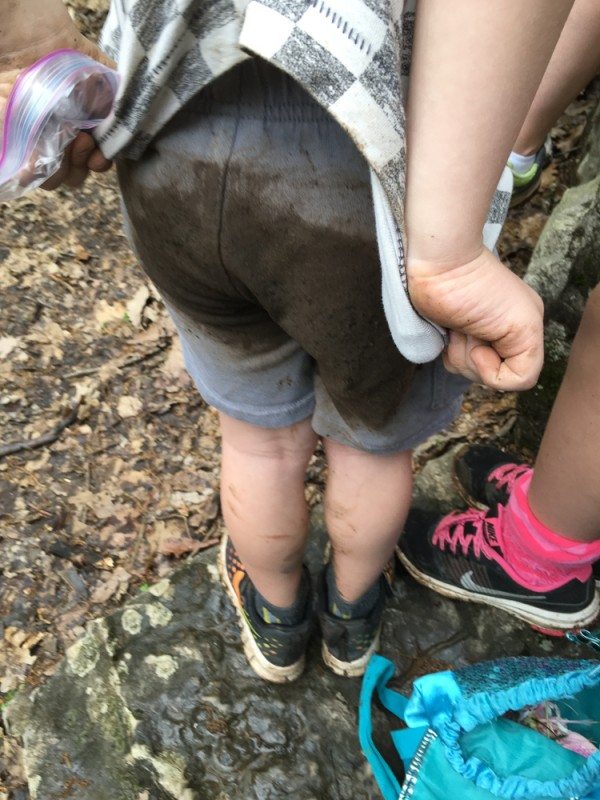 (Later, he insisted he didn’t need a bath – just a change of pants. I did not agree.) 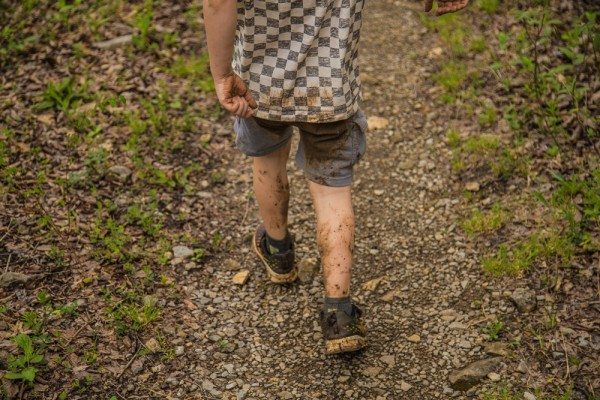 But we finally made it up the hill and discovered the wrong quarry. 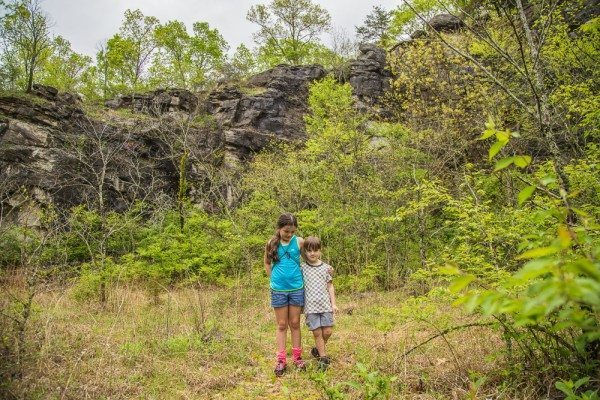 There was no promised cave, there was no 360 degree rock surround, but hey – we’d made a discovery. 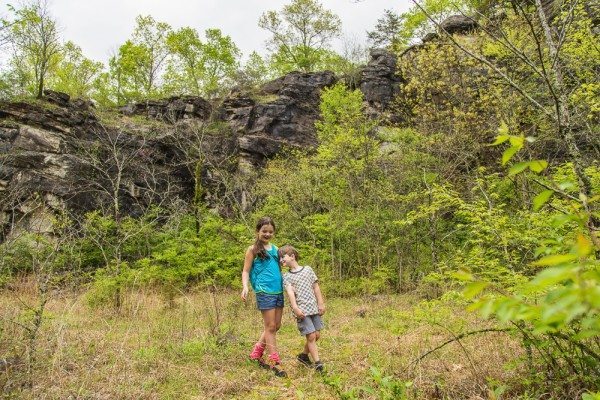 Which was cool and wonderful – until it was time to go back down The Impossible Trail. 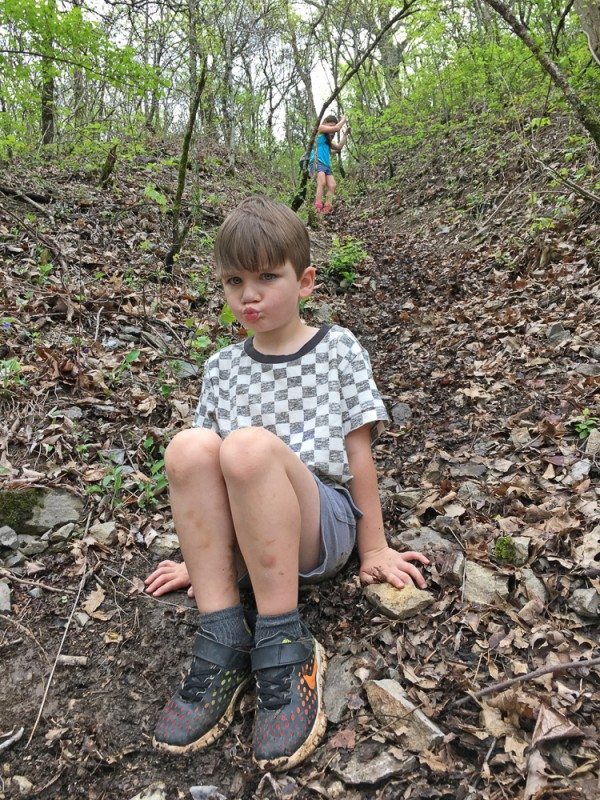 Noah decided to take the whole thing on his butt, because why not when your butt is already black with forest. 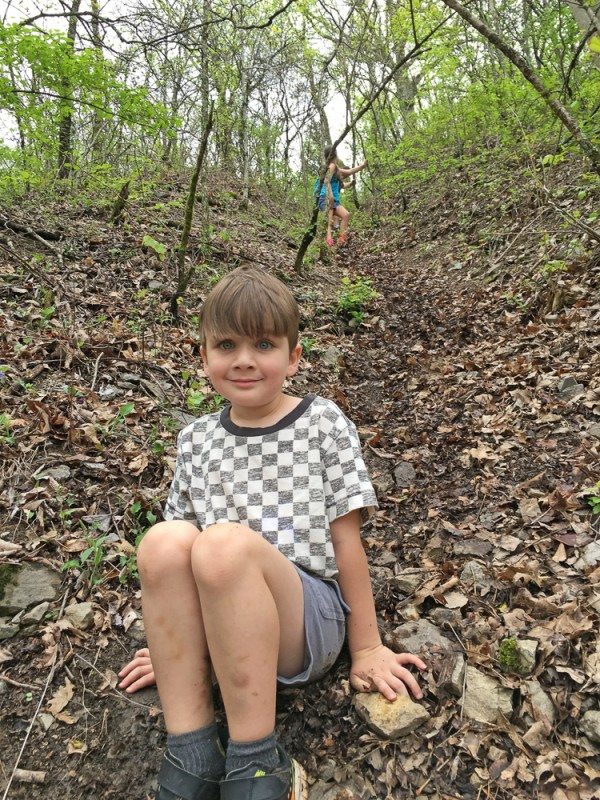 It took some convincing and begging and bribery, but I managed to somehow manipulate my darling children into taking the next unmarked straight-up-the-mountain trail, which oh-so-thankfully was the right trail and not nearly as harrowing as the wrong one had been.

At the top, there was the promised cave… 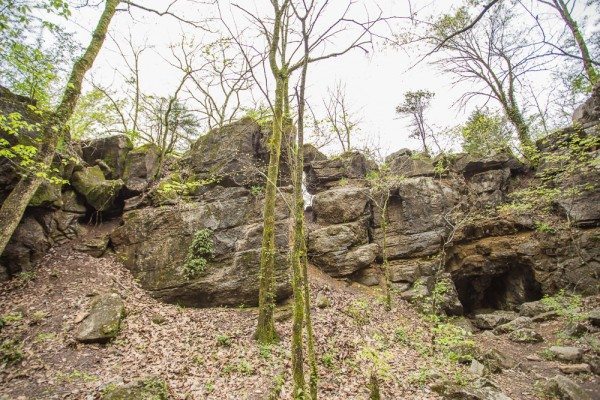 That was perfect for walking through… 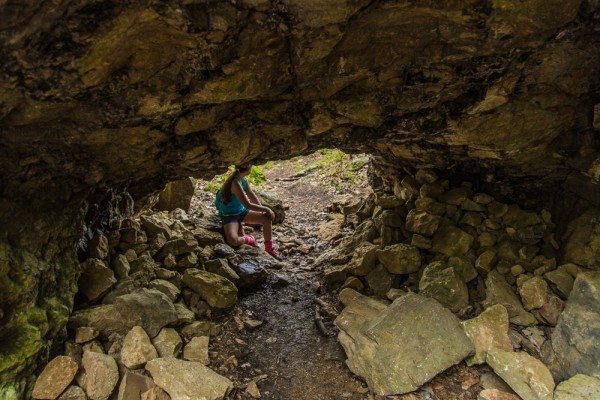 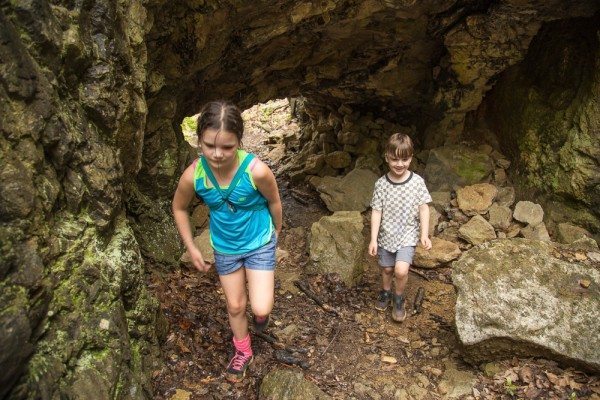 Which led to a magnificently surrounded ecosystem. 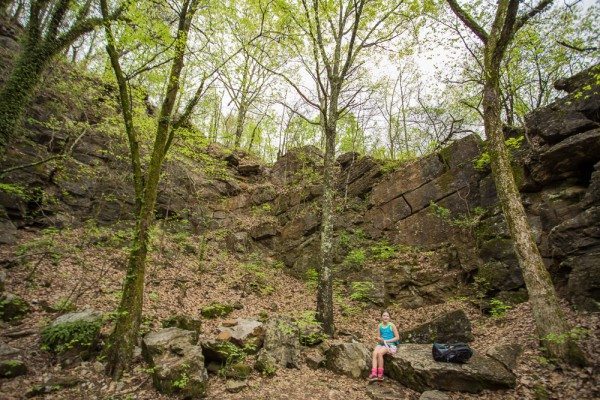 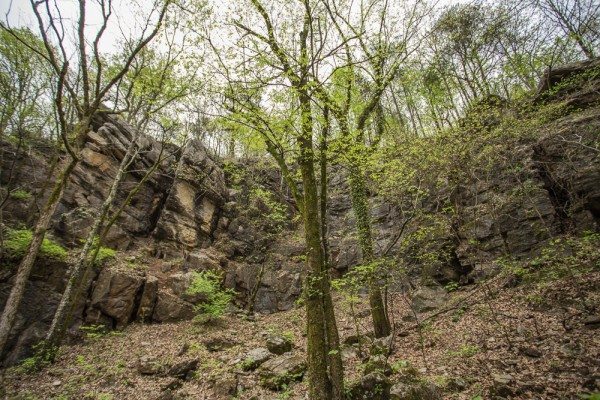 Was the pain and anguish of the wrong trail worth the end result? 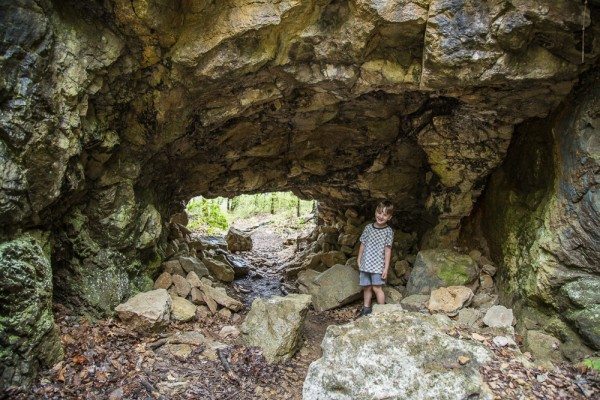 Absolutely. But I was begged, bribed, and forced to promise to never take them on the wrong trail ever again. 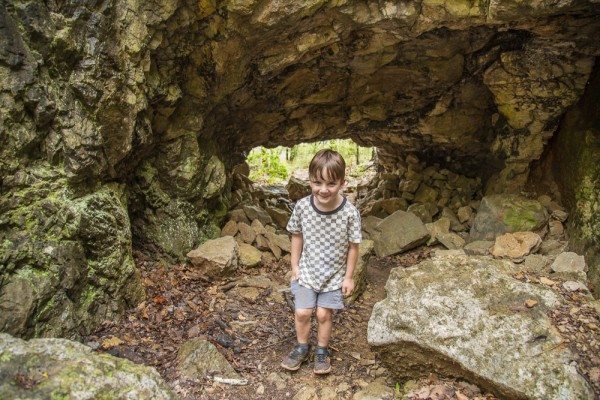 I’m not gonna lie. Pulling my five-year-old up a mountainside created some serious soreness in my body. But that soreness was overlooked when the very next morning, my Dad texted me and requested that I entertain him and the three cousins. They were staying overnight with my parents, and my Mom needed to paint the house, and Dad needed to remove the children from the area so that she could accomplish her goals.

I eagerly told Dad, “There’s a secret quarry! And a cave! Y’all will love it!”

“YOU PROMISED YOU’D NEVER TAKE US ON THAT TRAIL AGAIN!!”

“I won’t take you on the wrong trail. I promise.” 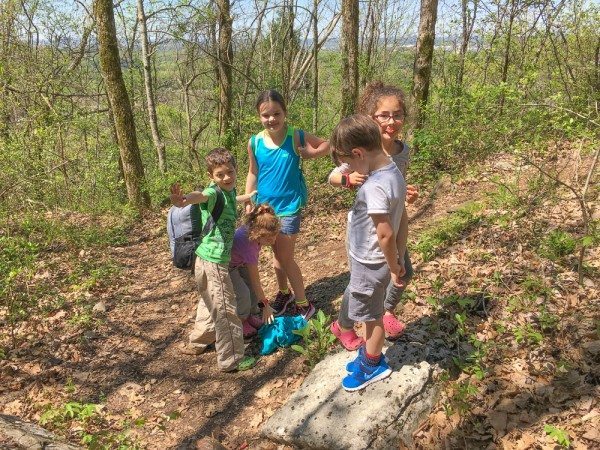 I led our little hiking troupe back to the right trail, up the mountain, and to the cave and secret quarry. 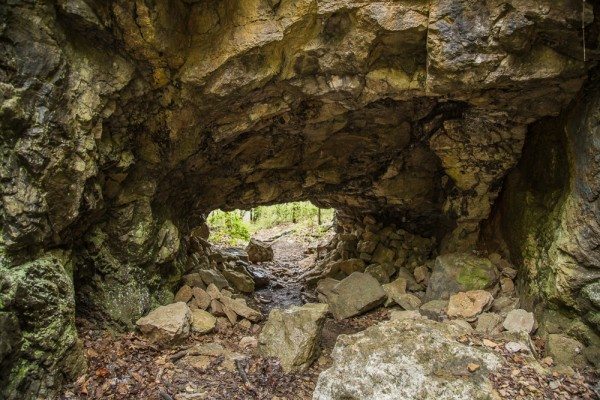 The five kids ran into the quarry and immediately began climbing the walls like cracked-out hamsters escaping an open cage. Dad and I immediately began wildly looking in every direction, counting to five over and over again.

And it wasn’t an easy count to five, either. Can you find all five? 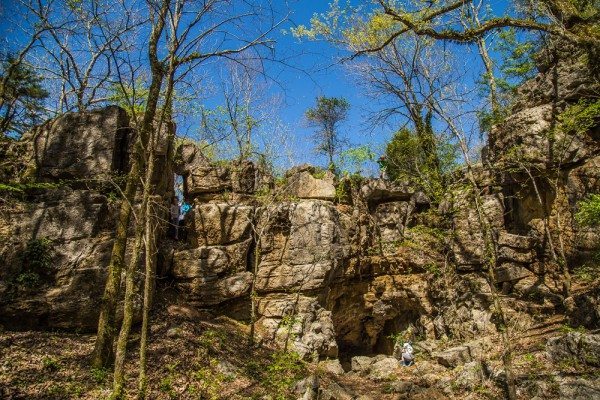 They’re there. Some higher than others.

One repeatedly got even higher (look to the left of the tree…children should never just be dots in the horizon.) 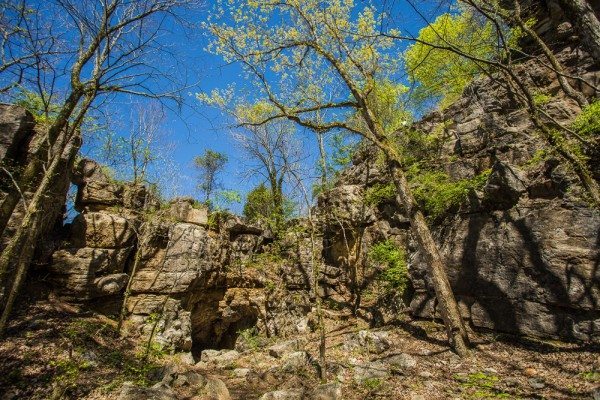 Obvs, he got put in time out. Twice. By his grandfather.

The youngest started climbing a wall, too, then looked down and panicked. 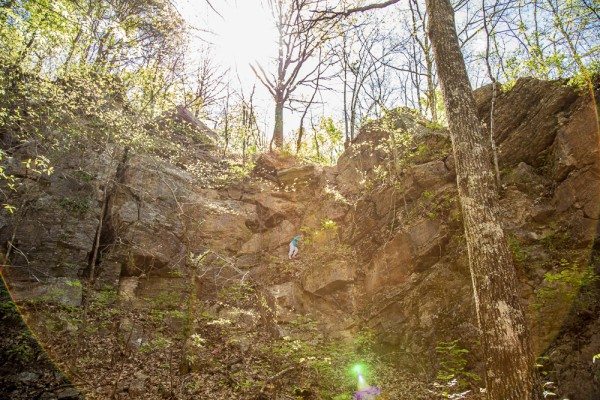 She was higher than she looks – that’s a large leafdrift below her, not the ground.

While she screamed and cried and flailed herself until she nearly slipped, thereby making her scream and cry more violently, I hurriedly climbed the wall to save her, all while nearly slipping myself.

Right as she and I returned to earth, my Dad pointed up the giant patch of poison ivy we had just traversed through.

Not surprisingly, I am still poisoned. And she is perfectly fine.

My Dad got tired of counting to five and putting one particular child in time out, so he decided to start a story circle. It was a killer Granddad move. He began a story, then each kid got a turn adding to it. 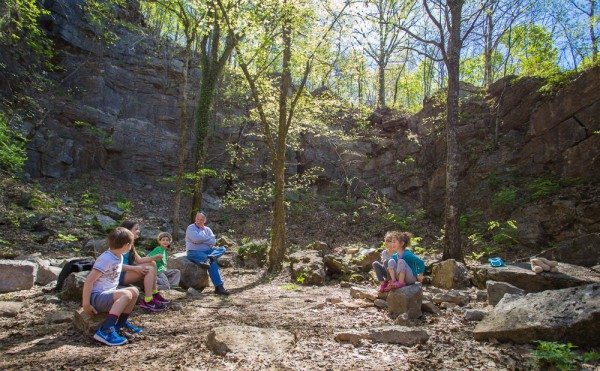 There were pirates and bears and adventure abounding. It kept the boys still for two whole minutes, and the girls entertained for at least ten. At any rate, it was long enough for me to go set my camera up and take a cave selfie using my phone to shoot through my camera like the geek that I am. 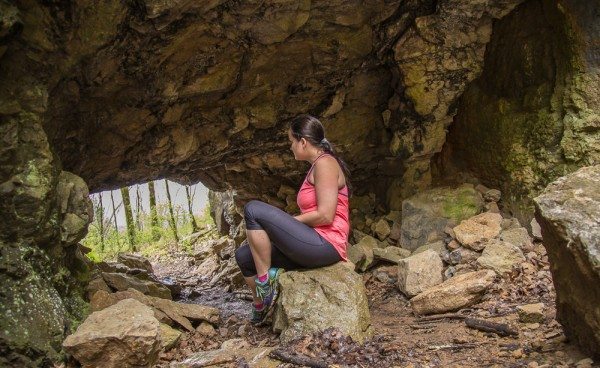 I even took an eternal photo – with glee and geekery! 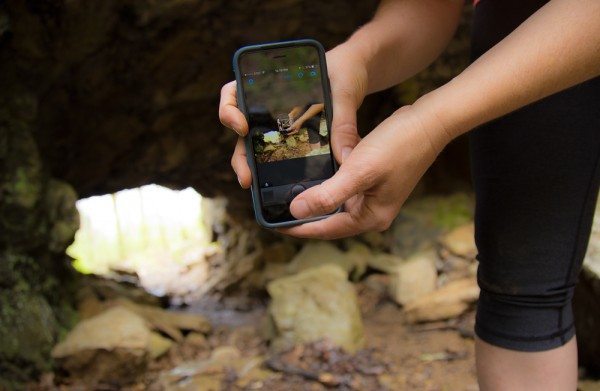 I know. I’m stupid. But Noah was impressed, anyway. 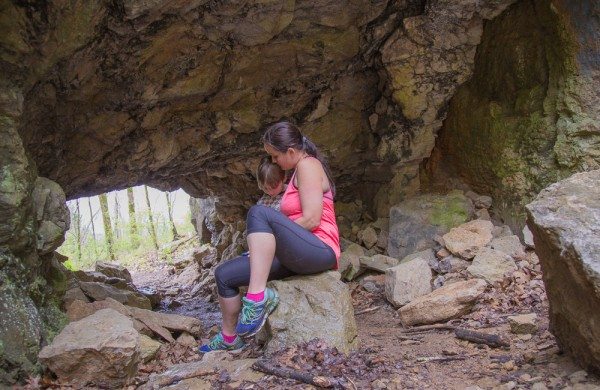 Chris met us there and we began to hike out, but not before all children but Ali cried from skinning a knee or getting stuck on a cave wall or whipping themselves in the eye with a large branch while trying to catapult their backpack from said branch.

(In true Granddad fashion, my dad mumbled under his breath, “If you’re gonna be stupid, you gotta be tough.”)

Dad grumbled several times about being too old for this, but considering that he’d made it this far, I figured he was doing pretty well for an old guy who left his blood sugar snack in the car.

…But because of that snack being left behind, when Chris asked if we wanted to hike up to the overlook before we finished our hike, I was able to say the phrase in full literalness,

“We can’t hike any further because Dad left his nuts in the car.”

And at that point, my life was complete. 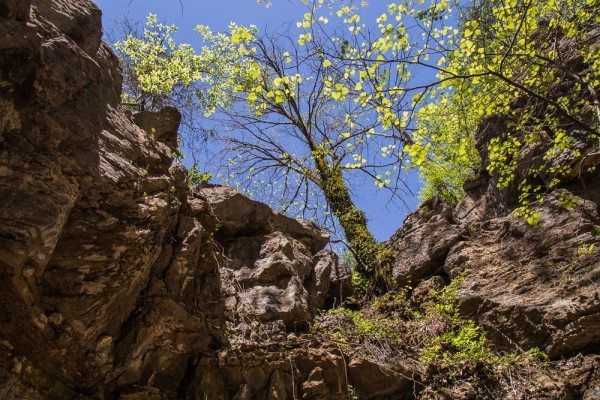 Editor’s Note: After our hike we ate lunch at Chick-Fil-A, where Ali managed to run into the playplace door and bang up her leg, causing the fifth of five cousins to shed tears. After feeding all five of them and rounding up all five of them from the playplace, I agreed with Dad – I’m too old for this stuff. And whether or not he ever asks me to entertain him again is quite questionable.

5 thoughts on “Exploring Secrets in Birmingham.”