Chris and I started dating in 1999. It was a previous century – quite literally.

I was 17 and he was 23 and neither of us had much money or culture. As such, our most elaborate dates happened at The Olive Garden. There was only one Garden Of Olives in town at the time, and everyone knew that it was the epitome of fine dining. Situated outside of our biggest mall, it was a culinary delight with their endless breadsticks that were infinitely tastier with the addition of a vat of Alfredo dipping sauce.

The first time Chris took me to The Olive Garden, I knew he was a keeper. Okay – I already knew that but to treat a lady with such delight and luxury as The Olive Garden – I mean – I felt like high society.

We’d regularly wait two hours for our Chicken Scampi and Tour of Italy, sitting out on the front porch with dozens of other anticipating diners.

As we grew up, got married, and had kids, our tastes changed. We learned the beauty of local food, unique restaurants, recipes other than typical chain food. And the fact that our former favorite vat of Alfredo sauce most likely contained at least 18,600 calories.

We rarely go to The Olive Garden anymore, and when we do, perhaps once a year, we go to a newer one nearer to our house. It’s in a quieter location and has a totally different feel to it than The Olive Garden of our youth.

But Saturday night, we had just attended a House Show. Our good friend Ashley was singing with Corey Nolen. It was a magical night – the show that forever changed the way we looked at Ashley, because now we knew that she was born to sing sad, tragic country music. (The album of this fantastic music is currently available for free on NoiseTrade, if you’d like to experience it for yourself.)

It was sentimental, emotion-delivering, and gave us all the feelings.

We had waited to eat until after the show, which ended at 9:30 half an hour past the time that most of our favorite places had closed. On a whim, because we were somewhat nearby, and we were feeling all those feelings, we decided to return to the place of our youth – The Olive Garden – the original one, the one we’d left unvisited for at least a decade.

We walked in and the place looked deserted. The waiting area was empty, the bar looked like no one had inhabited it in five years (and was that an olive tumbleweed?), and the two hosts looked bored and a little high. The highest host slunk in front of us and motioned with one shoulder to follow him. As we were passing by a section, another diner yelled for the host’s attention. He impatiently waved them off and continued to our table.

Maybe we should have taken that desperate attempt for help as a red flag that perhaps the service wasn’t on par that night. But we were in sentimental land, recalling fondly our early dating days.

We sat down in a section that was empty except for one large table – a family birthday party with three small children, one being a screaming infant.

…Seemed odd for 10pm, but whatever.

Oh – and the vacuuming man.

There was an employee forcefully running across every inch of our section with that manual crumb catching broom thingy.

As we studied our menus, I willed myself to not be the first person to mention the annoying repetition of the crumb sweeper. I’m too high maintenance. It’s 10pm at night. Ignore it, Rachel.

After no less than five minutes of the growing-in-passion vacuuming, Chris was the first to break. He put his head down and started laughing.

So I leaned over and whispered to him.

“It’s like The Olive Garden has no pride left. They’ve realized they’re no longer at the top and they’re just living it.”

But then, an exceptionally bouncy waitress pranced over to our table. With the excitement of working at the most trendy restaurant in town, she took our drink and appetizer orders.

We sighed in relief. At least someone in this place was aware of the concept of customer service.

A few minutes later, she returned with our salad and breadsticks, then skipped away.

It was at this moment we realized that our High Host had not given us any silverware. I flagged down Happy Waitress and told her the news.

She sighed loudly and headed off to get us silverware.

…Except instead, I saw her chasing High Host down the ramp to the kitchen giving him the silverware business.

We stared at our salad, which ironically we found to be devoid of olives, and waited to have our utensilless status righted.

As we divided our salad the way we always did (he gets the peppers and croutons, I get the tomatoes and olives except that the olives were invisible this time), Chris pointed out that there seemed to be a bit of uproar behind him. I looked up. Every server and manager in the store was crowded around the cash register, which apparently was not working correctly. We heard grumbles and complaints that the system was down.

As our evening wore on, we began to realize that our poor peppy waitress was just like that one person in the group project in school. She was trying so hard, and doing everyone else’s part to boot, but no one else in the restaurant seemed to be doing anything that faintly resembled a job.

…She apologized to the table next to us that she couldn’t find the bartender to make their drinks.

…She apologized to the second large table sat in our section that got sat with multiple children (who does this at 10:30pm?!?) that they also didn’t get silverware.

…Our food took approximately two eternities to be delivered, long after the breadsticks, Alfredo boat, and salad were gone.

…And when it was delivered, my Scampi had the distinct odor and taste of burnt animal. And, considering the love that I’d been witnessing from the restaurant staff, I was more than just a little afraid to eat it.

And then there was The Loud Crash.

The sound of a dozen dirty plates and glasses hitting the floor and shattering filled the restaurant.

In my line of sight but behind Chris’ head, there was a bus bucket that got dropped. Or thrown. Or shoved into the person in front of him then dropped on her toes. Or something.

And then there was The Explosion.

The waitress facing the busboy that had just dropped/thrown/shoved the bus bucket began yelling. Loudly.

Chris and I looked at each other and mouthed whoa.

The entire staff once again gathered, no one working, all recapping what had just happened.

They broke up and random staff members went to each table to fill us in on exactly what had occurred and why – because they don’t believe in leaving diners in the dark at This Olive Garden.

“You see, she’s been accusing him of stealin her tips and she finally got fed up with him.”

Our waitress reappeared, still bouncing, but immediately sensed that something had gone down.

She asked us about it.

“Okay – what did I miss? Everyone’s talking but I was in the back getting drinks and it took FOREVER. What just happened?”

After being filled in, she blamed the large table with the large drink order for making her miss all the fun.

Something between loud laughter or wailing wafted through the air. Then it started up again, only farther away. This time we were pretty sure it was wailing, and we were left to assume that the screaming waitress had just gotten fired (confirmed later by more employee/diner gossip.)

By now, we were well past ready to go. We asked Less Happy Than Earlier Waitress for boxes, and she disappeared to get them.

Apparently boxes were as hard to come by as silverware, because she didn’t seem to be returning.

After five minutes, another waitress came by. “Are you guys all right? Do you need anything?”

Actually we’d like a box and would like to leave before there’s any [more] workplace violence, thank you.

“Hmm. I’ll check on those boxes for you. By the way I’m sorry about what happened earlier. I was the girl who broke up the fight.”

Awkward silence. Should we thank her? Offer her the room temperature butt of our breadstick? Congratulate her? We didn’t know.

Frightfully Forcibly Happy Waitress finally found some boxes. “Thank you for dining with us tonight!!”

We got up to leave and she said “Oh! Wait! You don’t have a bag for your boxes.”

“HOLD ON. HERE’S YOU A BAG. LET ME PUT YOUR FOOD IN THIS HERE BAG.”

She was losing control of her restaurant. She sensed it. But she was NOT giving up on her duties in this class project.

We grabbed our newly bagged food and sprinted out of the restaurant before any disgruntled ex-employees returned.

When we were safely outside, we looked at each other in awe.

“And to think we used to wait two hours for that place.” 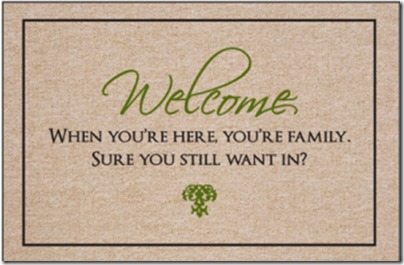