“I’m starting to feel antsy to get out of town again – I guess that’s a good sign.”

I had just told Chris that last Sunday, and it was the first time I’d even thought about leaving town since the all-too-often mentioned wreck twelve weeks ago. Sitting with my legs down for more than half an hour is impossible, so car trips seemed off the table.

But I get an itch to go, do, and be twice a year: once in the fall (this is the inescapable urge that must be satiated to save my sanity), and once in January. I presume the January one is a result of having survived Christmas and New Years sandwiched with both my kid’s birthdays, and I feel the need to stretch out and blow off the cobwebs.

Two years ago, this trip turned into the epic Snowchasers adventure – the one where we basically got snow/iced out of Birmingham. Last year, we returned to that same state park, but with no snow.

This year, I hadn’t made any plans, but then all of a sudden on Wednesday they made themselves for me. A contact at Alabama State Parks emailed and asked me if I wanted a room at Cheaha State Park to take pictures of the coming snow, Chris told me I should go and reminded me that the kids had been praying for snow, and a friend, Sarah, agreed to go with me. In the span of four hours, I went from having no plans to having a completely mapped-out trip and a LOT of packing to accomplish.

Friday morning, we packed up the car to an impressive level for what was planned to be an overnight trip (which was good since it ended up being a two-night trip), grabbed Sarah, and set off. 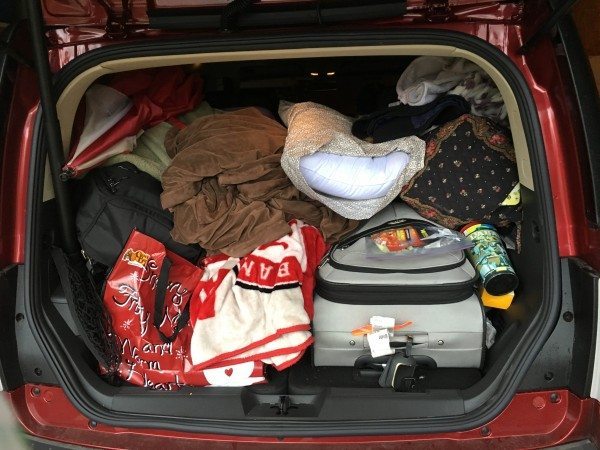 On the car ride up, the children showed off the vastness of knowledge and reasoning skills that homeschooling has afforded them.

…Such as when we passed a four story building, and Ali said, “That can’t be Rapunzel’s tower because her tower is 20 feet tall and that one is only ten feet tall.”

…And when we passed a small lake (a pond, really), and Noah informed Sarah, “That’s the Amazon River because it’s green and the Amazon is green.”

…And when Noah heard the song “I can’t help falling in love with you” and said, “I’m pretty sure that’s Mexico Music.”

…And then when Noah randomly explained theology, “There’s a big ice chunk floating around, and that’s hell. I read that in the bible. But I didn’t learn it at church.”

(We should note here that he can’t read. If that’s any excuse.)

Cheaha is the highest point in the state of Alabama, so as we drove up the mountain, we entered complete cloud cover. Ali started freaking out about being afraid of heights, and I, being the merciful Mom that I am, said, “What is wrong with you? We’ve been here before when you could actually see off the side of the mountain and you weren’t frightened at all. Now you can’t even see how far up we are!”

“Exactly! I knew we were high last time, but I had NO IDEA we were as high as the clouds!!”

…because if you fall off the side of the mountain you’re more dead if you’re high enough to be in the clouds, I guess.

We arrived, got settled in, and then set off for pre-snow adventure. Sleet was beginning to mix with the rain as we ran down the Bald Rock trail, a half-mile boardwalk trail. 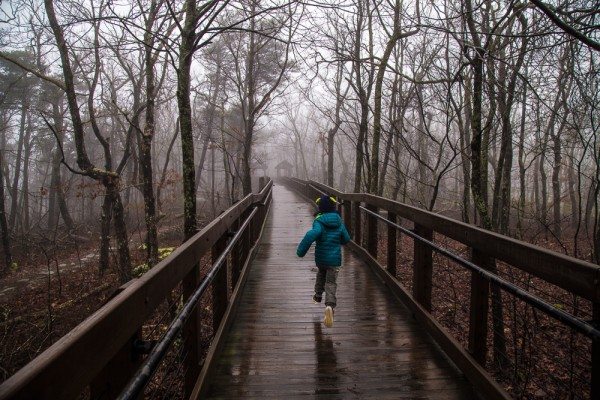 Ali’s fear of the clouds seemed to dissipate at the fun of the boardwalk, 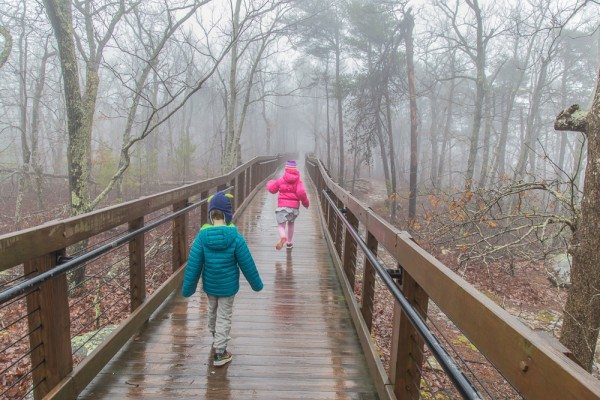 And Noah fully approved of the climbing rocks at the end. 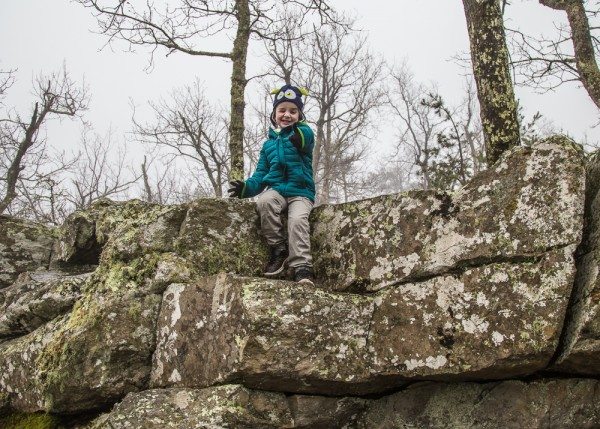 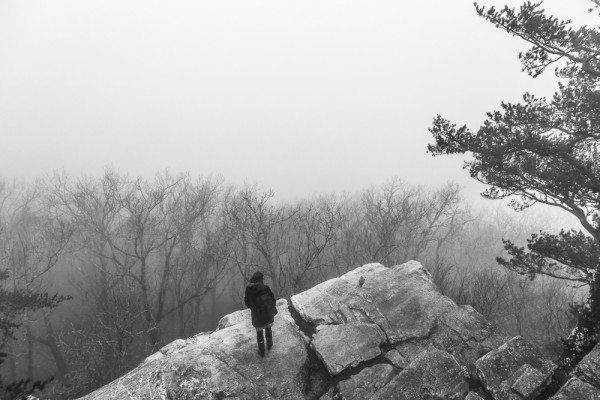 Really – it looked like this last time we were there. 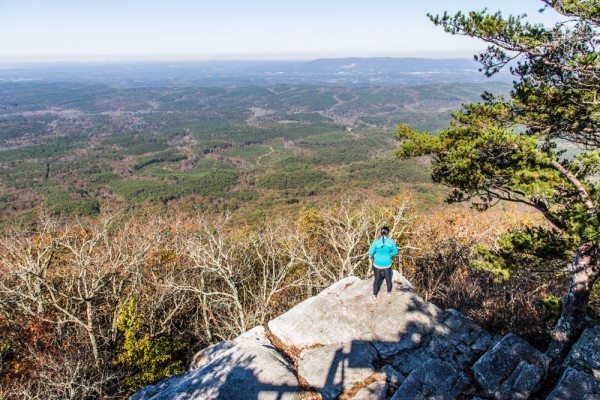 On the way back down the path, Sarah fascinated the children with her hipster Polaroid camera – it made her so beyond cooler than me. Not that she wasn’t already. 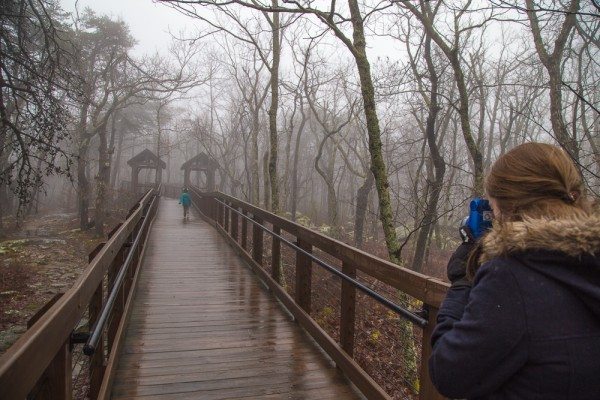 We headed back to the room for some rest time, and right around dark, the snow began. The wind coming up the mountain was absolutely indescribable, so we mostly watched it from our large hotel room windows, running out for half seconds at a time to take a picture or catch a snowflake. But the children could rest easy because their dreams were coming true and their prayers answered. 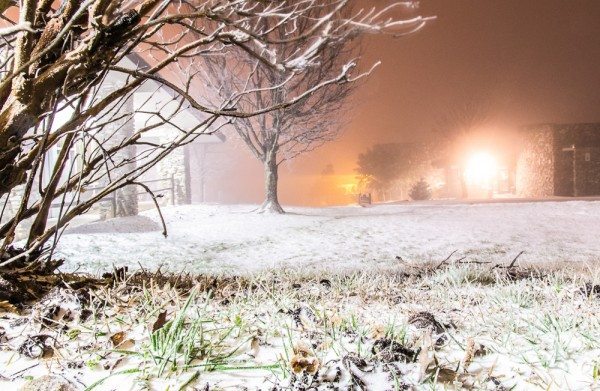 (And also because I was letting them play way too much iPad to keep them from jumping all over our hotel room. To which Noah said with a happy sigh, “I’m glad God made Minecraft. And I love you Mom.”)

To be continued as I gather myself from the weekend…

4 thoughts on “Stumbling Into Epic Adventure”