So my neighbor Renee (of “Fall Craft During Labor!” fame) and I have been hanging out a lot – she had a baby, I had a wreck, we’re equally disabled, and so we sit and talk while our children entertain each other and her new baby sleeps on me (because we’ve bonded and all.)

Something about hanging out with me, though, causes weird things to happen to people, and she’s had quite the bloggable moments in the past month or so. She told me that I was welcome to write about them, but only if she didn’t become a character on my blog that everyone thought was crazy.

So we’ll refer to Renee from here on out as Not-Crazy-Renee.

So, for Not-Crazy-Renee’s first tale, I share with you a transcription of a particularly desperate “I’m Having a Bad Day” Saturday morning text stream to me. For reference, Loulie is almost 5 (and Noah’s future wife, per Noah), and Jonas is 1.5. The day before, I had been at her house packaging a large Picture Birmingham note card order, and had left behind some trash in her trash can – trash that happened to ruin her Saturday morning…

It all started with the note card inserts that Jonas dug out of the trash last night. Loulie apparently became very attached to these cards – something I should have deduced based on the random, half-crumpled pile they were left in on my kitchen counter.

Which I of course, returned to the trash.

There was TOTAL AND UTTER DESPAIR that the cards were missing.

Okayyyyy…I didn’t know what this plan was but it’s obviously important. So I opened the trash can, and there they were right on top, still in a random, half-crumpled pile, but totally salvageable.

But seeing them (back) in the bin was totally traumatic, on par with finding the severed head of a beloved childhood pet in the trash heap.

I rationally suggested she just pull them out. But she was well beyond reason at that point, and the hysterics were spreading to my other children. So I told her to take it to her room until she was either a) no longer upset, or b) willing to do something about it. Because standing two feet from the trash can wailing was not an acceptable option.

So she went. And I guess I didn’t get enough sleep last night because…

She came back shortly after, attitude not adjusted…Started whining again…And I lost it.

Not-Crazy-Renee later described her facial expression, as she yelled for her child to run, as this: 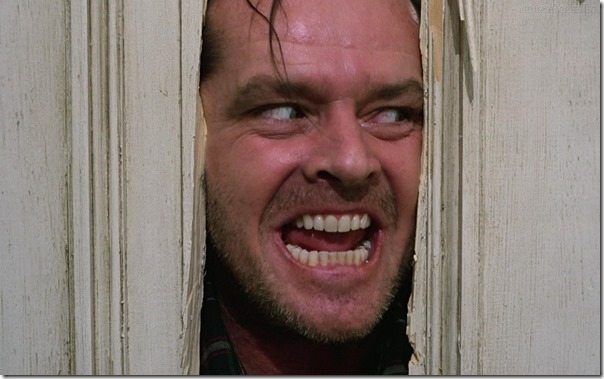 You can totally relate to Not-Crazy Renee, right? I certainly can.

So. Since the whole paper disaster was my fault, and we were having them and some other people over later that afternoon for a football party, I felt like this was my opportunity to make it up to Loulie (and more importantly to Not-Crazy-Renee.) I could give Loulie a new paper product – a NEW and IMPROVED paper product that actually had to do with her, and she could play with those.

So, I dug back into my mind from my dweeby childhood, when my favorite game to play was office and I hosted an office spend-the-night party every year for my birthday (I have no idea why I grew up to become an accountant). And I created something for the children that my Mom used to make for me and my friends: personalized checkbooks.

Then I decided to take it a step further and also make them prescription pads – to contribute to a proper game of doctor.

(But not until after I checked to make sure I couldn’t be arrested for making fake prescription pads.)

I found/made prescription and check templates and added the kid’s names and fake addresses on the template and printed them out. (I was going to use real addresses but I know kids. And I knew these pieces of paper would get scattered all over the state of Alabama. And people didn’t need to know their addresses. And also I figured if the doctor’s address was “Second Star to the North”, I was less likely to get arrested for prescription forgery.) 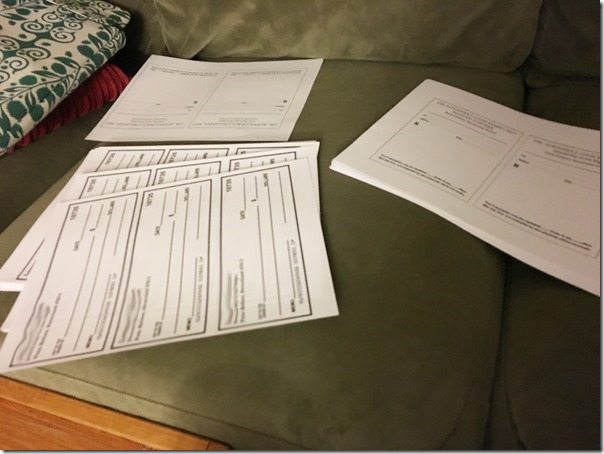 Then I had an excuse to use my paper cutter – always a good day. 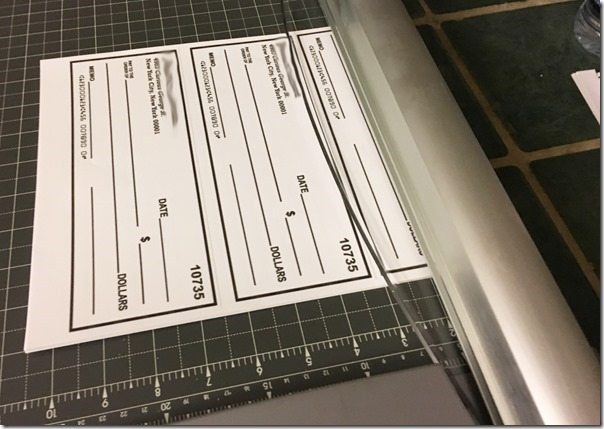 Also, the pile of mess was very satisfying. 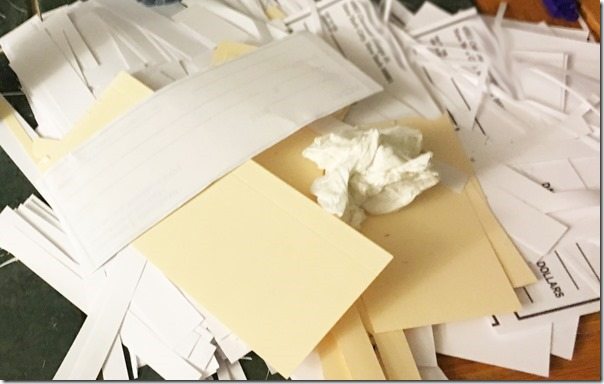 After cutting and lining up loose checks and, separately, prescriptions for each child coming over, I poured glue on a piece of paper, then dipped the top edge into the glue until it was well coated. This, friends, is how you make a notepad. 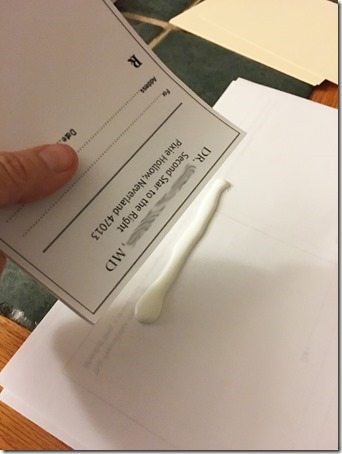 Then, to make sure that they dried in an appropriate notepad-ish fashion, I put them in a heavy book overnight (Teacher’s Edition Textbooks work perfectly.) 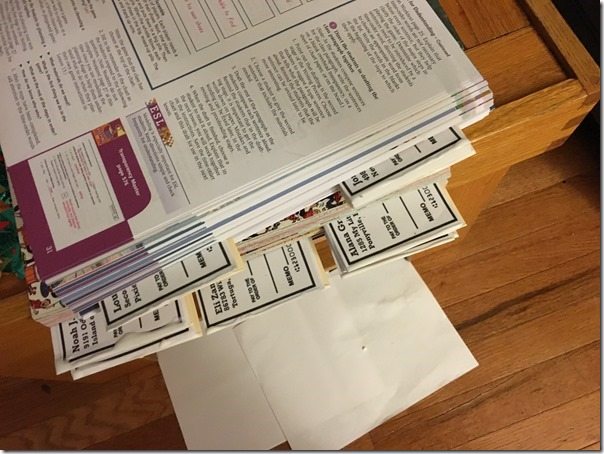 (Also note the glue-catching paper on the floor below them. An important part of the process.)

Later, Chris asked me, “Where’d you learn how to make a notepad? Pinterest?”

“FROM MY CHILDHOOD, BABY. My Mom was better than Pinterest!”

The next morning, I had a beautiful stack of prescription pads and checks. 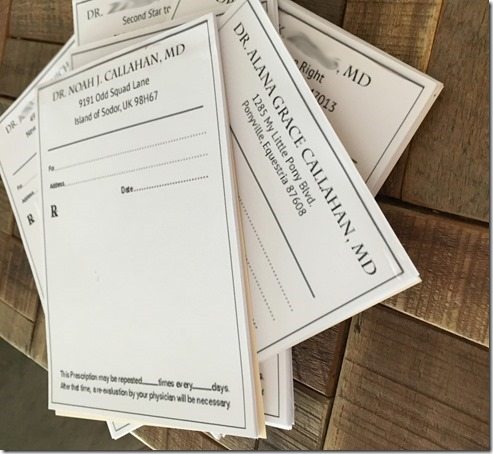 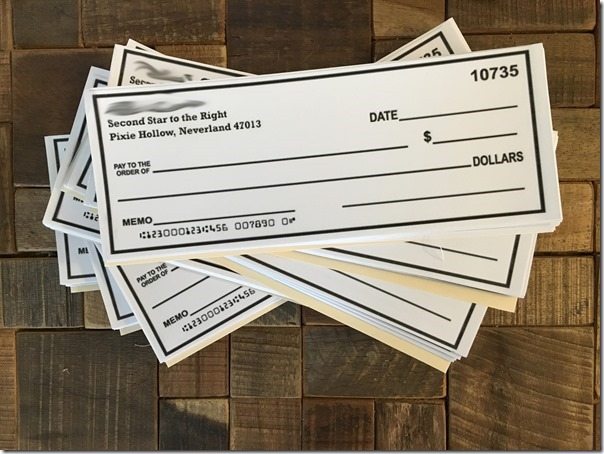 (To give the pads a little stiffness, I cut and added Manila folder to the back of each pad. A completely unnecessary step and also they didn’t line up right with the checks, so I should’ve just let the children have limp checkbooks.)

I had told Noah the night before that I was making a surprise for him and all his friends for the football party, but the next morning when I showed him the beautiful paperwork I did on his behalf, he was mad.

“That’s not fun at all! You said you were making something FUN!”

Naturally, I had a not-crazy-Renee moment on the boy and told him he WOULD have fun or he could FORGET ever having fun again.

But later that afternoon, on his own accord, he ended up being the one to enjoy the note pads the most. So Not-Crazy moments do some good, after all. 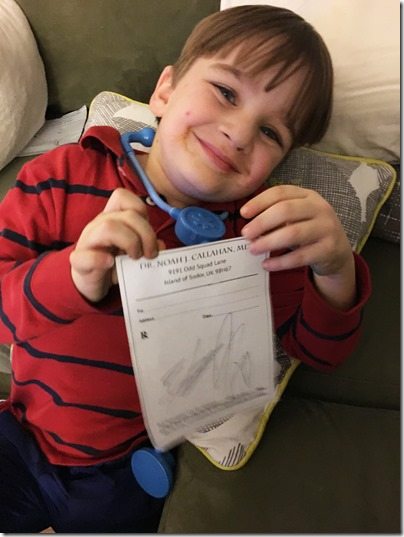 In fact, he’s still giving me prescriptions daily for all of my various ailments. This one is a prescription for…my eyes. 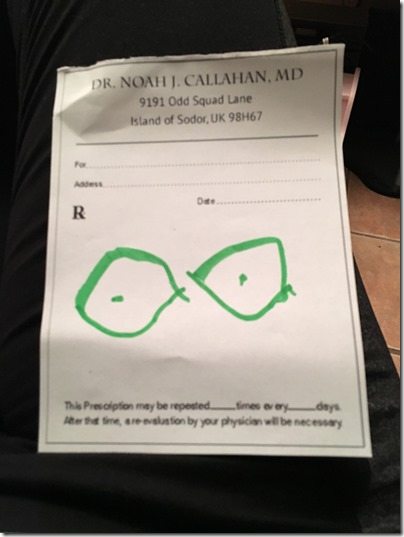 Since Noah enjoyed them so much, he asked me if I could please make him Police Officer Traffic Tickets for his Batman Birthday Party, and I was happy to oblige. I made this new template up late the night before his party, 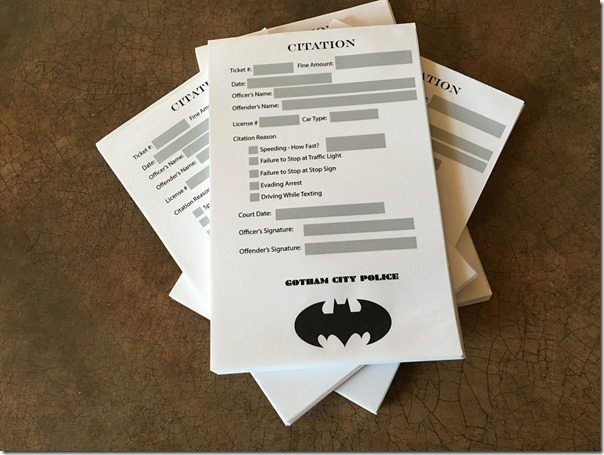 And then gave him a ticket to show him how to properly use it. 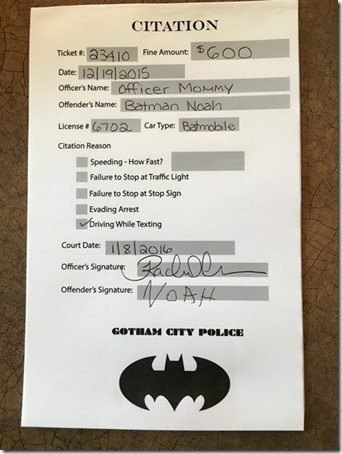 And he loved it. But not as much as I loved all of my prescriptions for my eyes. 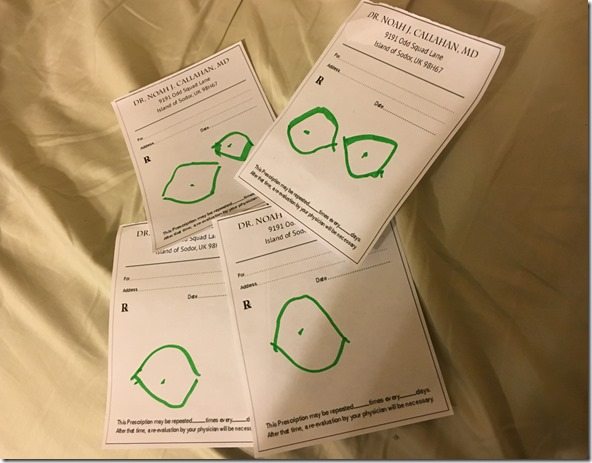 If you would like to geekify your own children, I uploaded my templates for you. They’d make free and easy last minute stocking stuffers, and you can add your own children’s names to the checks and prescriptions with any photo editing software (although I’m not promising to be available for technical support at 11:30pm on Christmas Eve.) To download them in .jpg, click here:

Just don’t throw any of the used ones away – or you, too, might have a Not-Crazy-Renee moment.

11 thoughts on “The Delight of Paper.”