Our ambulance arrived at the hospital and Chris was waiting for us. As they opened the doors, I was so relieved to hear his voice, although I couldn’t move my head to actually see him. The children arrived a moment later, Noah bubbling over with joy and reports of ambulance bliss. The policeman who rode with them came over to me and said “They never stopped talking a single second.”

I think he needed a doughnut and coffee break after that ride. And I should’ve bought the first round.

Chris took the kids to the waiting room while the paramedics wheeled me into Birmingham’s brand new hospital, Grandview Medical Center, and although I had been anxious to see it, I was quite immobilized.

The ceilings looked grand, though.

Then came the line of admitting nurses, vital checking nurses, and physician’s assistants. Each one asked me my pain level, what had happened, and if I could be pregnant.

The Physician’s Assistant dialed up the intensity by following up with, “Why? Why don’t you think you could be pregnant?”

“Because my husband has had a vasectomy.”

Her eyes narrowed, “But you still have all your parts, right?”

I guess my lack of guilt and defensive protests convinced her that I was NOT, after all, at risk of pregnancy, and she let it go.

Chris and the kids came back for a few minutes until Noah’s hugs got too violent, then he took them back to the waiting room.

I asked the nurse if I could pee. I had drank most of my iced coffee, after all, and it had been a while since I’d seen a bathroom.

No I may not. I am immobilized for a reason. When all scans are done, then I may pee.

An hour went by and I told a nurse I REALLY needed to pee. She said no, but did expedite my scans.

They took CT scans and multiple X-Rays while I was focusing on keeping my bladder from bursting inside of me. I secretly hoped its burgeoning state would mess up all their scans.

They wheeled me back to my room and again I asked to pee.

“Not until your scans are read by the doctor and we know it’s safe to let you get up.”

This. This is the pain and suffering for which I would need to be reimbursed.

My information board showed that it would be at least an hour and a half before my scans would be processed. Chris was back in my room by then (my Dad had come and picked up the kids), and I told him I was GOING to go pee. If I didn’t, the injuries I would sustain would be significantly worse.

He held up his hands and said “I will take no part in this.”

I heaved myself up in bed, with great pain, in anticipation of sneaking into the hallway to the bathroom next door.

Which is when a nurse walked by and beat me to it.

Chris laughed. “Did you just get snaked?!”

I waited, dangerously close to bladder implosion, for her to hurry up.

She left, so I leaned out of the doorway and turned my whole body left and right (immobilization makes stealthiness terribly difficult), and when I was sure the coast was clear, I tip-toed into the bathroom and let out a giant moan of relief. Then I casually walked back to my bed and waited another hour and a half, thankful that I had taken things into my own hands.

The doctor came in and said that nothing was broken, the nurse gave Chris a ream of paperwork that included a couple prescriptions and instructions for treating whiplash, and they sent us on our way.

Chris came and picked me up at the ER entrance, and as I walked out, I saw this. Ah, the view was grand, after all. I stopped to take in the moment (and a few pictures.) 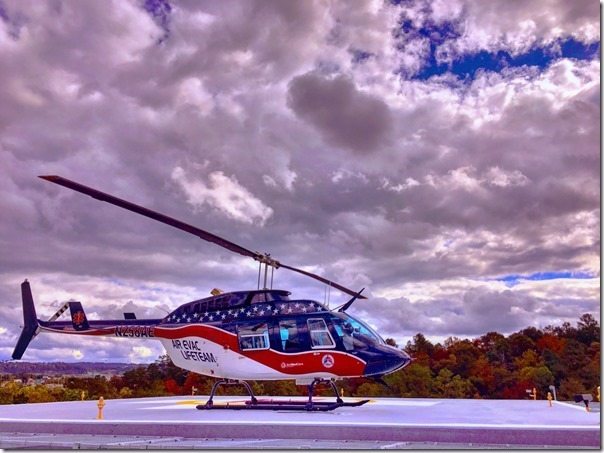 Then I got honked at by an ambulance and slithered into Chris’ car.

He took me home and put me on the sofa while he handled all the things – getting my prescriptions, going to look at the car and talk to the towing company, and later, going to pick up the kids from my parents at church, along with a collection of balloons from my Grandmother’s Birthday party – the one that I had so rudely missed. 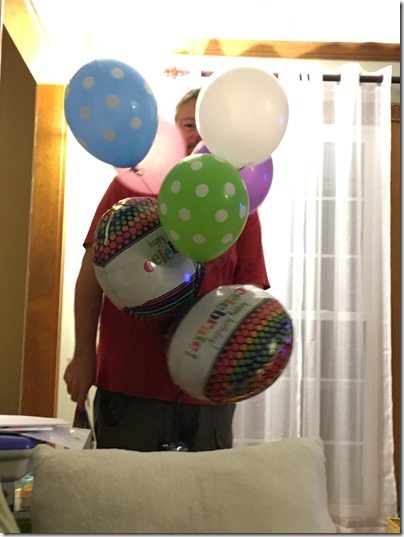 Although I could barely lift my head to see it, I did appreciate his attempts at celebration.

Meanwhile, my pain increased in both quantity of locations and intensity, and I began to realize that maybe I was hurt more than I first thought. The same happened with the kids, although their adrenaline lasted significantly longer than mine. According to my parents, Ali did nothing but run up and down the church hallways manically while yelling about how much energy she had. (Kid Adrenaline *may* be chemically identical to cocaine.) But as Chris drove them home that night, Ali cried softly in the back seat and told him that she never wanted to go down that road again.

Both kids started having head, neck, and shoulder blade pain, along with a nice lump on Ali’s forehead from presumably hitting the window, and Noah’s chest hurt where the seatbelt caught him.

On Thursday, Chris’ mom came over for the morning so that I could take pain pills, muscle relaxers, and stay in bed. This turned out to be quite a blessing, as my pain level had continued to increase. The kids, although sore and not able to turn their heads all the way, seemed in better spirits than the night before. But I was perfectly content to not leave my bed.

I asked a friend to pick up the wreck report for me so that I could start the tedious process of filing a claim on the other driver’s insurance. By the time I was able to call, though, the claims manager had gone home for the day. So I asked to speak to anyone who could help me, because I needed to get a rental car.

I got a most unhelpful representative who informed me that until the claims processor determined that the wreck was truly their client’s fault, he couldn’t help me with my rental car needs. I told him it was stated on the wreck report that both the police officer AND the driver confirmed that the collision was her fault. There was really no question about it.

“I’m sorry. But it doesn’t matter what the police or the driver say. The claims processor has to determine if she was legally at fault before we can help you with anything.”

…Because he was there at the wreck and all, officiating like a sideline ref? Or was he in the replay booth?

“Fine. I’ll get the rental car myself and y’all can reimburse me when you decide it was her fault.”

“I really wouldn’t recommend that at all, ma’am, as I cannot guarantee that we would reimburse you for any expenses.”

I let out a bit of indignation in my voice as I stated my syllables very pointedly. “I have to take my children to the DOCTOR tomorrow morning to get their injuries from the WRECK checked out. If we cannot go to the DOCTOR because you won’t let us get a rental car, then we may have further PROBLEMS.”

He changed his tone and said, “Let me see what I can do.”

He came back several minutes later. “I’m sorry. I really can’t do anything. But I see here that it looks like it will be determined to be her fault, although I certainly cannot guarantee it. You can get a rental car on your own and we should be able to reimburse you for it.”

But at least he didn’t refuse to let me pee.

More to come from our epic saga of a week…and apologies to all who prefer short and succinct stories.

8 thoughts on “What Happens After a Collision.”