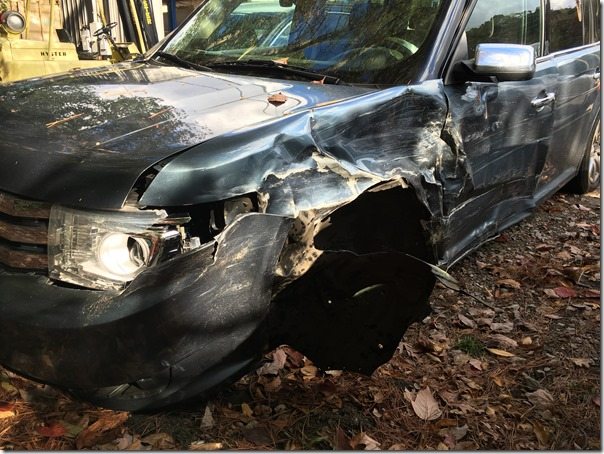 THE SPACE TOASTER, FLEXI – Age 5, of Birmingham, passed away October 28, 2015. Funeral will be at The Assembly of Towing Impound Lot at noon on Friday. Flexi will be remembered fondly by her friends and family. She had a heart for others and ultimately made the journey to the other side while sacrificing herself for the passengers inside when they had an unfortunate meeting with someone coming the other direction who decided Flexi’s lane looked more fun.

Flexi will be buried with her most prized possessions – an impressive collection of vintage Chick-Fil-A Waffle Fries, lost squinkies, sticks and rocks and leaves that little passengers thought looked “really cool”, an inexplicably misplaced shoe or two, sticky juice splatters on the rear windows, giant drifts of invisible-to-children garbage in the back seat (The kind so impossible to see that it cannot be found when children are reminded every time they return home, “Pick up all your trash as you get out of the car!”), and a brand new coating of iced coffee that gave her interior a fresh pick-me-up smell as it coated the car in caramel goodness at the point of impact.

Flexi will also be missed for her fascinating and eclectic mix of music on her hard drive, including the previous owner’s R&B and the current owner’s Alanis Morissette, Watermark, R.E.M., and Veggie Tales Singalong albums. Flexi lived a full life, seeing countless numbers of stunning sunsets, chuckling at the same conversations being held daily (“Mommy! Can you pick up my toy? I dropped it.” “No, son. I’m driving.”), and taking the owners on wild snow hunts, fall foliage hunts, and epic camping trips.

Flexi was especially talented at the technical aspects of driving, including a navigation system that could be trusted anywhere except in downtown Atlanta (“They change their roads too often – that was NOT a one-way road two years ago!”, Flexi used to defend), a voice command system that never quite got the hang of understanding her owner’s southern accent, and eternally helpful traffic reports on the go.

Flexi’s family is hoping to adopt a close relative of Flexi to pay homage to her dedication over the years.

The family would now appreciate it if you would all hum “In the Arms of an Angel” in unison as a show of mourning for the recently departed Flexi The Space Toaster.