Eli is my seven-year-old nephew.

Eli is a fantastic kid, mind-blowing in intellect and often infuriating in adventure. He is intensely curious about the world around him and has very little impulse control. As such, there is nothing I adore more than hearing my sister-in-law Lindsay’s rundowns of his daily pursuits.

Last week, those episodes included microwaving Cheetos for three minutes with the vision of creating melted Cheetos for breakfast, attempting to make “Dog Juice” for their yellow lab, Layla, by soaking dog food in water and then pouring the newly-bloated dog food down the kitchen sink, and opening his sister’s birthday presents on her behalf.

(I’ve begged Lindsay to be a recurring guest-blogger for years but I think Eli most likely poured chocolate milk on her computer as a legitimate experiment long ago.)

Eli also has a very special bond with animals and insects – if ever there were a child Doctor Dolittle, it is Eli. He remembers every fact he’s ever learned about any creature, and watches shows like Wild Kratts religiously to continually gain new knowledge.  His desire and ability to befriend all living creatures even extends to cockroaches, whom he insists make wonderful pets.

Lindsay and I took our combined brood of five kids to a playground not long ago. It was a particularly hot summer day – the kind that all of the mothers cling to the shade of the pavilion and are constantly shooing the children out of said pavilion because “We’re at a playground for goodness’ sake and we didn’t bring you here to complain about the heat and sure it’s hot but you’re supposed to be playing!”

Unlike the other kids, Eli didn’t seem to be weakened by the heat. In fact, he was quite caught up in…something. What exactly is he chasing around? What’s he staring at?

Lindsay was off to take another kid to the bathroom, so I felt mostly responsible for preserving Eli’s life and well-being until she returned – a grave responsibility indeed. I called him over and asked what he was doing.

He ran over with a sweaty, beaming face as if his life had recently been made complete and stuck his finger out at me.

“Look Aunt Rachel! He’s a Carpenter bee. His name is Busy. He lives at my mailbox at home and follows me everywhere I go. He flew behind us to the playground. Busy would never sting me – he’s a nice bee. And I’ll tell him not to sting you either. Busy, don’t sting anyone, okay? There. Now Busy won’t sting anybody.” 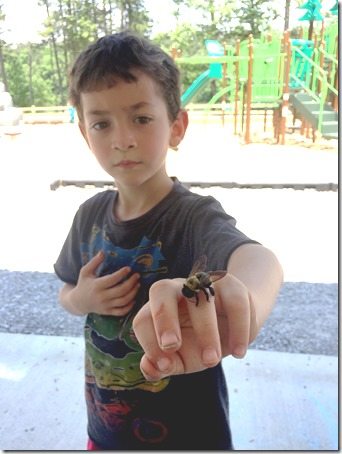 Although I was skeptical about Busy’s stated place of residence, he did look oddly happy crawling on Eli’s finger during his entire monologue. The bee seemed curious and…was that a bee-version of affection? It certainly seemed so.

There was one other Mom currently seeking shelter under the pavilion – one that I did not know. She became very nervous during Eli’s explanation of his new pet and suggested that Eli needed to be careful – he was likely to get stung. Eli turned to her and insisted that Busy would never sting anybody, and besides he was a Carpenter bee and Carpenter bees do not sting.

She picked up her phone and Googled Carpenter bees. She reported back decisively that Busy was indeed a Carpenter bee, but she was definitely a “she” (because she was missing the male’s yellow head spot) and girl Carpenter bees do sting (but she left off the rest of the sentence usually found when Googling female Carpenter bees, which is “…but they very rarely do so.”)

The whiny pavilion-dwelling kids who heard this news nervously slinked off to the playground while Eli continued insisting to this bubble-bursting stranger that Busy was NOT that kind of girl and she would NEVER sting.

Meanwhile, Busy lazily went back and forth between flying in circles around Eli and landing on his finger in a familiar manner.

When Lindsay returned from her quest and got up to date on Busy and Google and the clear friendship that had blossomed in her absence, she instructed Eli that he must take Busy to the top of the hill and allow her to fly away before someone got stung.

Eli sadly stomped up the hill and squatted down at the top, having a long conversation with Busy, ending in an impassioned “Go, Busy! Just Go!!”

I watched as Busy would fly away for about five seconds, then come right back to Eli.

After a few attempts, Eli quietly left the hillside and went back onto the playground, Busy still following him. He played, with Busy alongside him, for at least twenty minutes. It was clear that Busy was just as attached to Eli as Eli was to Busy, and us Moms mused aloud that maybe Busy did love Eli.

And Eli ran screaming and crying to Lindsay, holding out his rapidly swelling finger.

Eli cried, partially because his finger was swelling and turning white, partially because he was heartbroken over the great betrayal of Busy the Bee, and partially because he knows all the facts about all the animals – and he assumed that the sting meant that Busy now had to die. Lindsay comforted Eli and I Googled to confirm that, as opposed to honey bees, Carpenter Bees actually do not die upon stinging.

But for once, all of the animal facts in the world could not mend Eli’s broken heart that had been stung by the bitterness of betrayal.

He crawled out of Lindsay’s lap and spent the rest of our visit to the playground squatting sadly under the slide, head and shoulders drooping, mourning the loss of a best friend.

But there are many more bees in the world.

And Eli will not be deterred in his future attempts at friendship.

15 thoughts on “The Life and Times of Busy the Bee.”