Sunsetting is an introvert’s sport.

Only they can truly appreciate the long spans of time spent watching the skies…the fiddling with camera settings…the locating of the perfect angles…and the quiet admiration of the cloud iterations.

It’s like fishing – but minus the fish and plus a camera. And minus the water and plus the sky.

Sometimes, though, you run into other people partaking in this same introvert’s sport. And sometimes, those people are not introverted enough. And since it’s not exactly like fishing, you can’t motor your boat away from them.

I don’t mind talking to people – I really don’t. I even like people most of the time. (Okay some of the time.) I’ve met some wonderful people sunsetting. But I’ve also met some people that can befoul a sunset rather magnificently.

For instance, the lady that I’ve run into on more than one occasion who has informed me during each visit the details from her last surgery, her current medical condition, and the ailing state of her family unit. As sunsetting is typically pursued for its calming qualities, hearing about giant cysts and toe fungus does not, exactly, aid in the enjoyment of the sport.

(Then again I blog about similar atrocities and you willingly read about them so are either of us allowed to complain? No.)

However, running into her is now as thrilling and catching the Queen of England taking a few sunset shots compared to the new acquaintances I met last Friday night.

I was on a long stretch of sidewalk overlooking the city. It’s a fantastic view – a nice foreground of kudzu and framing of trees. I don’t go here as often as some of my other spots, but I should – it’s just lovely. 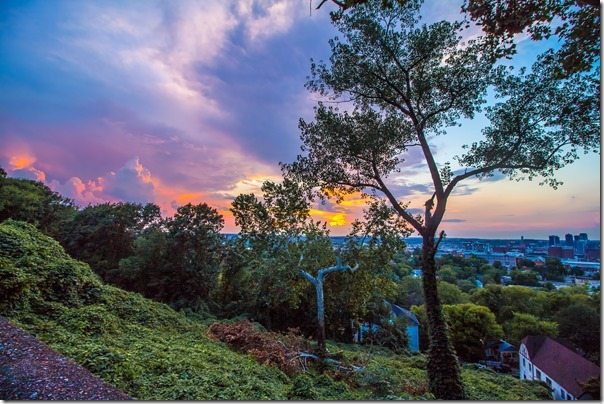 I was all alone in my sunset adventures  – no one else was anywhere along the extended stretch of sidewalk-with-a-view, and Chris was waiting in the car with the kids, thoughtfully giving me a quiet moment to recover from motherhood reflect as I enjoyed my favorite time of day.

The sunset was changing colors and different clouds were turning on and off in brightness, keeping the night interesting and a fun guessing game – what would happen next?

I had just texted Chris to check on the kids and make sure it was okay if I stayed a few minutes more – it was getting to a good part.

Chris assured me they were fine. So I studied the skies, staked out the spot I wanted, and began shooting. 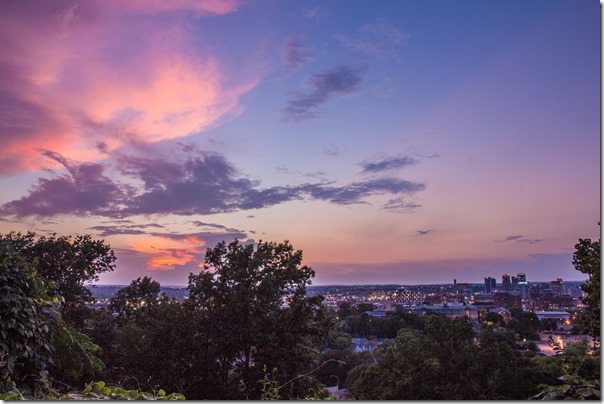 …Which is when a very loud bunch of giggly girls and one guy came bouncing down the sidewalk, all asqueal about selfies, with their phones out and ready.

And then, of that whole long expanse of sidewalk, they stopped. DIRECTLY in front of me.

To the point that one literally jumped into my photo. 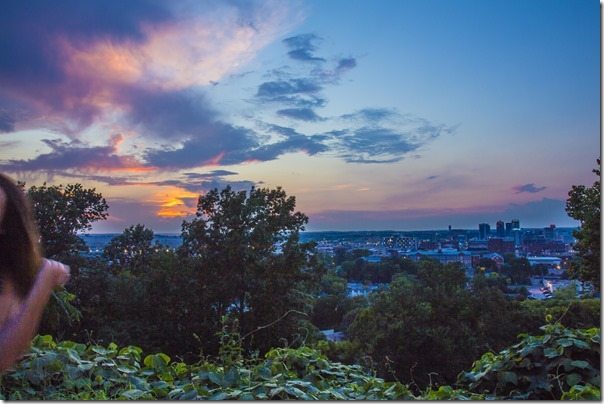 I stopped shooting for a second and pulled my camera down, staring at them rather like they were aliens from the planet Narcissicia. I looked to my left, then to my right. 100 feet of sidewalk, all with a view, and I was still the only person there, except for these girls who were – are they lifting each other up on their shoulders for pictures?

Why yes. Yes they are.

But the sunset was at such a nice spot. And I didn’t want to miss it. So I took two steps to the right. At which point one of the girls noticed my presence [six inches from her face] for the first time.

“Oh I’m sorry! You’re trying to do the same thing we are!”

“Uhhhh….NO.”, I muttered under my breath, and then waited for her to follow up her apology with a gesture of moving out of the spot I had clearly just been occupying.

“Hey Mom! Take one of us doing gang signs – for Snapchat!!”

I turned my head further left to realize the female that I thought was the fourth teenage girl was actually one of their moms – I’d been previously mistaken as her shorts were as short and tight as the other girl’s – she blended in quite impressively. And she seemed to be as pleased as a Mom watching her daughter give a Valedictorian Speech to be taking repeated photos of her daughter and friends as they flashed various gang signs and toothy smiles.

I let my camera hang again and began taking iPhone pictures of these girls to text to Chris. Not that they noticed – they never noticed me again after the empty apology. If it hadn’t been for that, I would have started to wonder if my introversion had somehow morphed me into an invisible ghost.

I looked over at the Dad, mentally imploring him to be the thoughtful one. But he was bored and detached, bobbing his head to the tinny sounds of rap flowing out of his iPhone.

The mom yelling at the girls jolted me out of my mental meanderings. “You’re blocking the sunset! Move over a bit so I can get you and the sunset in the picture!”

“I don’t CARE about the sunset! Just take the picture, Mom!! Geez!”

You. Don’t. CARE. About the sunset.

You say you DON’T CARE about the sunset.

THEN WHY ARE YOU IN MY PERFECTLY CHOSEN SPOT.

It’s not that there weren’t other fantastic spots on that sidewalk. That THEY could have chosen to see the sunset they didn’t care about. But I surely wasn’t moving to those other spots and allowing them that great of a victory. I was going to stand there, as close to my original spot that I could be without getting kicked when it was time for the “Let’s do Herkies and Duck Lips!!!” photo. Because I wanted to make them feel like I was standing over them like Sheldon would, saying repeatedly in a monotone, “That’s my spot. You’re in my spot. That’s my spot. You’re in my spot. Um, by the way – you’re in my spot.”

Except that I was invisible to them. So my strategy was flawed. But I still wasn’t going to budge.

I looked over and the Mom was taking her own selfie while the girls discussed their next pose. I took more pictures as I live-blogged the whole thing to Chris.

While they waited for their Momtographer to finish up her head shots, one of the girls climbed onto the other girl’s backs for the obligatory piggy-back ride pose. Because piggy-back is what I always try to capture when I’m at the sunset.

At that, I finally walked back to the car, laughing at the ludicrousness of what had just occurred, and even considering thanking them – because although they sure know how to ruin a sunset, they’re experts at creating fantastic story content.

3 thoughts on “How To Be a Terrible Sunsetter.”