For the past two years, my husband has been the chairman of the building committee at our Church. We’ve been building onto our current buildings to connect them all and put in an elevator – because our property is on a slope, has been built onto several times, and it was all…well, wonky. It needed to be connected and accessible and stuff.

His chairmanship has consisted mainly of late-night emails and after-work meetings and such, and simply being able to understand all this stuff that I don’t grasp at all, since his day job is in commercial construction (the computer parts of it – not the actual building of it.)

Sunday was the grand opening of this new connecting unit. 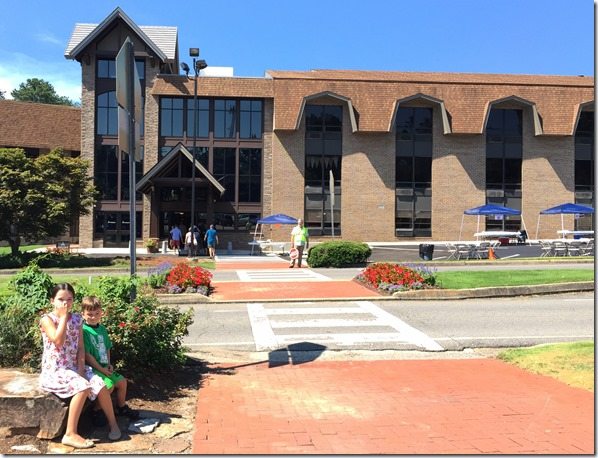 The children, clearly, were thrilled. 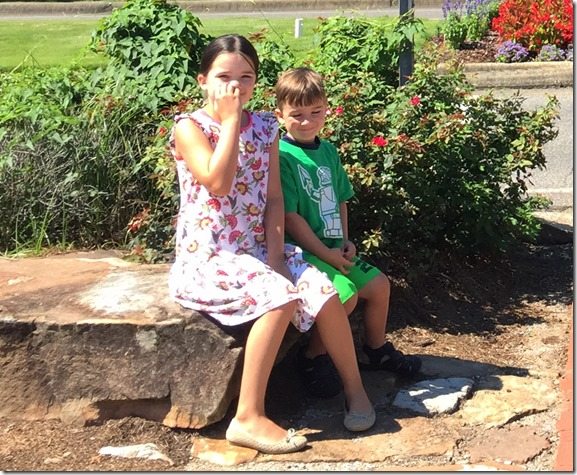 The church had planned a community celebration, inviting the whole neighborhood to church and a party – to eat food from all of the area restaurants, to see the new building, to play on the water slides, to get their faces painted, and all the things such as this.

The church service was a “family service”, which translates into no Kid’s Church – 1st grade and above go to big church. Ali and I planned on attending together, knowing that Chris would be quite tied up with last minute building things and helping set up the post-church celebration.

So when Noah decided that he really wasn’t feeling like attending his nursery class, it seemed somewhat logical to let him come with Ali and I. After all, I already had one child in the service – why not add another?

Regardless, I’m positive that the pastor appreciated the dramatically loud and bored yawns from the third row. And the even louder fake snores.

When the service ended, I felt approximately as physically exerted as one would feel after wrestling a medium-sized chimpanzee for an hour. I limped out of the service and onto the ribbon cutting, then to get the children food, force their father to sit with them for a few minutes to retrace my steps and find my sanity, and then I took them out to the waterslides.

Alone, of course, as was expected, Chris had many tasks.

I could do it. I’m a Mom. I handle my own mischief (or two mischiefs) all the time.

No surprise, the kids didn’t want to do the waterslides – after all, “Risk Averse” is written in bold, gothic letters at the top of our Family Crest. But then Ali decided she wanted to, and a few minutes later, Noah did too.

I took Noah to Ali’s spot in line and asked the two girls behind her if they minded if Noah broke in line so he could go up with his sister.

Their turn arrived and they started up the steep climb – Noah in front and Ali helping him up. At the halfway mark, he managed to slip and fall all the way down the ladder – between her legs or off to the side or something. So he started back up the ladder behind her – now with no help.

The thing was Mount Everest to a four-year-old. 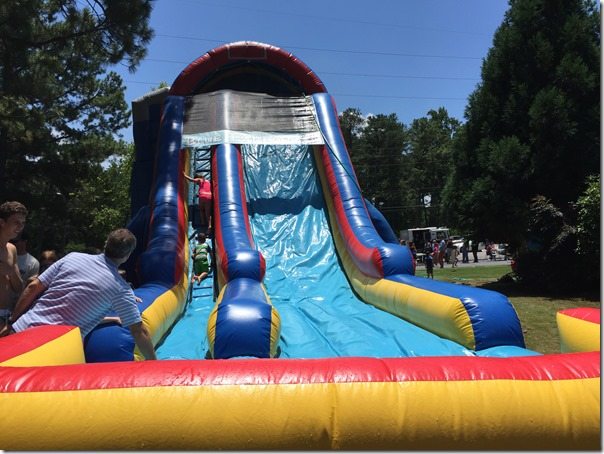 It didn’t take him long to panic.

He looked down and tried to climb down, but the steep climb up and down both freaked him out, and he froze. As one does on a waterslide with thirty kids waiting for their turn.

My friend Lydia said “I’ll go get him!”, and of course that would never do. I handle my own mischief, thankyouverymuch, and plus – she was wearing extremely light-colored pants for a waterslide.

The other kids shuffled around to let me in front of them. Poor children, looking at the hopelessness of their line-waiting situation.

I kicked my shoes off, handed my phone to Lydia, and started the steep climb up while what felt like the entire church – nay the entire community – stared at my awkward grappling. 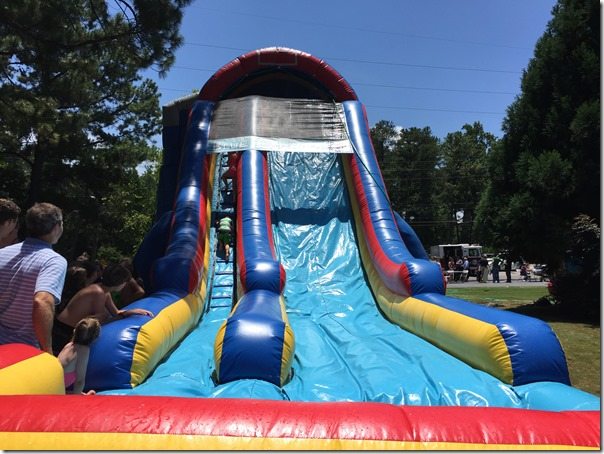 I now know: there is actually something worse than A PlayPlace Rescue.

First of all, those ladder rungs were not made to hold adult feet.

Also, they were at health hazard levels of slippery.

My only comfort were the sturdy handles next to each step. I felt as if I were mountain climbing with no proper footholds – hefting myself up by my arms. When I reached Noah, I then began having to support him with one arm while supporting myself with the other. Motherhood should totally be an Olympic Sport.

However, my presence did not diminish Noah’s panic at all. In fact, when he realized I was there to help him up and not down, the wailing really commenced.

This was a crossroads of parenting where every parent must decide: Do you let your kid wuss out and turn around when the whole church is already staring at your butt, or do you heft him up the slide and MAKE the dang kid have fun to prove to him that he can do it?

I decided on the latter. To continue my poor-decision-making trend for the day.

We made it up to about four rungs from the top, him still screaming, me still shoving him up the stairs while he begged for mercy. We were so close. 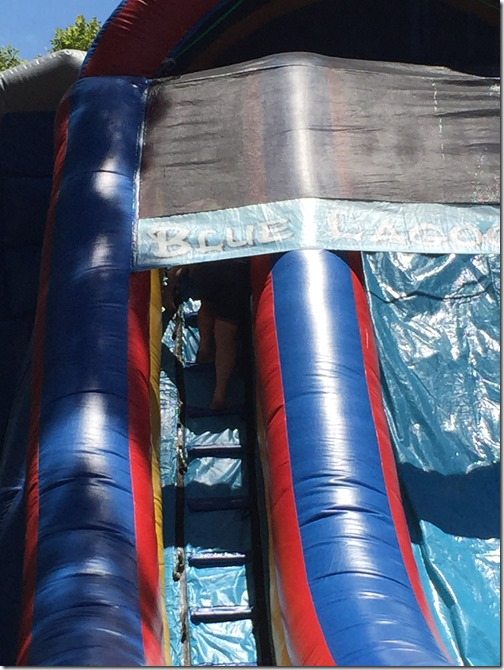 When my feet slipped and my one-armed grip on the rope did not suffice. And I fell, belly-flopping over each rung of the ladder, all the way down to the bottom.

So thankful that I handed my phone to a friend who didn’t mind using it. Or not. 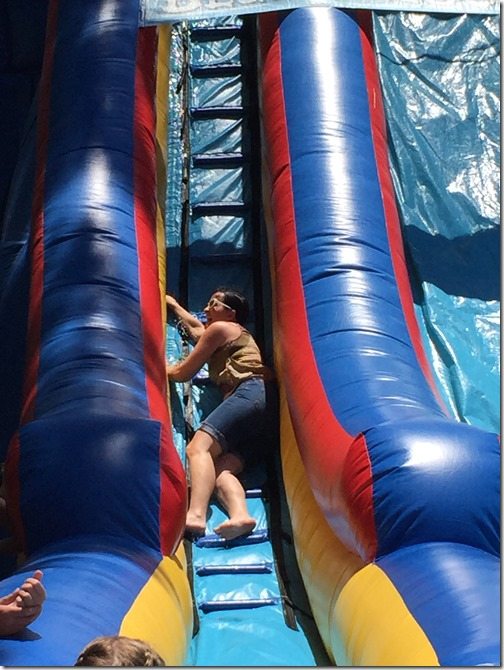 It was super graceful, y’all.

This did not help my child’s panic, now all alone at nearly the top of the ladder, having lost his mother to a nasty fall down a mountainside.

But what could I do but start all over? I pulled myself up the Cliffs of Insanity yet again.

(This is a good time to note that my arms and shoulders are still sore from that journey. I’m just glad I didn’t have to swordfight a fellow left-hander when I reached the top.)

I made it back to where Noah was and kept shoving him up the ladder and over the edge. Then I went to lift myself up to the top – which is when I realized that those oh-so-handy hand ropes ran out. Right before the top.

I frantically swiped at all slippery rubber surfaces, trying to find something to hold onto, but to no avail. Then I reached a hand up to Noah and said “You’re going to have to help me up.”

It was at the moment that the child actually offered me a hand when I realized that physics were not on this plan’s side and my decision-making for the day was unbelievably impaired. I found the strength within myself and somehow miraculously threw my weight over the edge with nothing to hold onto, grabbed my son, put him in my lap, and went down that blasted slide.

Which of course, my persistent friend Lydia didn’t mind at all recording.

18 thoughts on “Slip Sliding Away.”