It was day nine of my tonsillectomy recovery, two days away from being released back into normal life by my doctor. It was the day that I finally started feeling better. It’s a strange thing, anesthesia. You don’t realize how much it subtracts from your living until all of a sudden you wake up from its aftereffects, and then you’re shocked at how much of a zombie that you’ve been for the past week and a half.

So day nine, Friday. The pain was still present, but it was better – I even got out my old lady pill slicer so that I could take a quarter of a pain pill – I just needed enough to keep the referred pain in my ears and teeth away – I could handle my throat.

(Except when I yawned, sneezed or burped – don’t ever do those things after a tonsillectomy.)

I even went on a walk – a long walk – by myself. It was glorious. I might’ve even tried to run – for less than half a mile, of course, being that I was afraid my throat would begin spurting blood as my doctor warned me – but I just needed to make sure that the eight pounds I’d lost so far had not been all of my running muscles.

When Chris got home that evening, we left the house – left the house! It was only my third time in nine days to take part in such luxury. We went to go pick up the children from the last of their string of all-day playdates, each day with a different family. (We have the best of friends and family.) Then, we went out to eat, where I carefully ordered soup and nearly-liquid dip.

The soup was too lemony and stung my still-white-with-scabs throat, but the dip was good. And Chris followed it up by buying me a chocolate and a peach milkshake from Chick-Fil-A – so I felt fairly well-nourished, at least compared to the previous week.

Then we went to “The Sunset Playground”, where I sat in a chair and watched my first sunset in a week and a half while Chris and the children happily playgrounded. 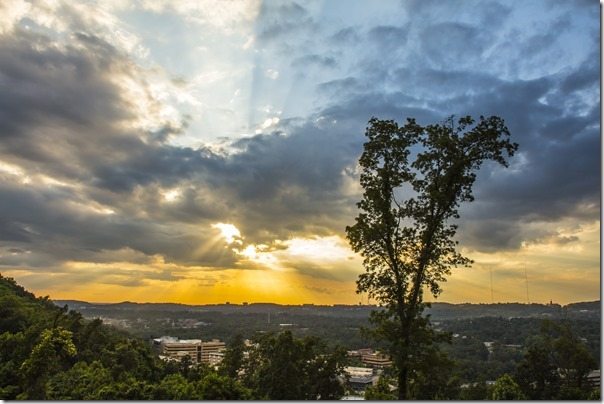 It felt normal, real, and for a moment, I even forgot that I’d had a brutal surgery performed on my throat. It was the first time I’d forgotten – waking or sleeping. 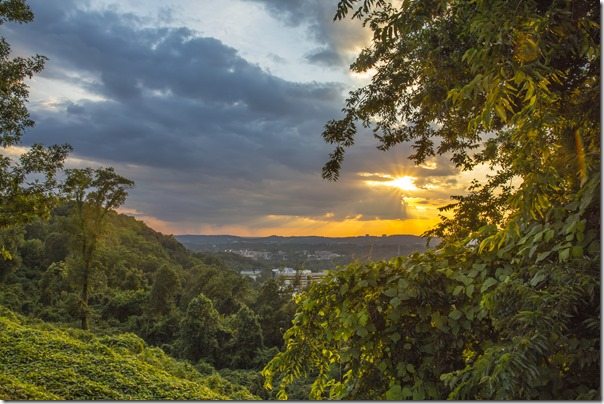 It was blissful, really – to experience life after having been sidelined for so long. Life after no life is better than life before experiencing no life. And plus, I don’t do well sidelined – I feel crushing guilt for all the everything I’m not accomplishing, so I don’t even enjoy lying limp on the couch, even though it was all I could do.

(Although I did enjoy binge watching 30 Rock.)

After sunset, we came home and I began putting the kids to bed while Chris attended to a slow drain in our master bathroom. He followed the instructions on the Liquid Plumber bottle, filling the tub up with water and then pouring half the bottle down the drain.

He went downstairs to get something, then came back up and said THOSE words to me.

I jumped up and said, “It’s leaking through the ceiling. Isn’t it?”

Having had flood trauma that resulted in nine months of repairs in my past, it was hard to quench my emotions in that moment. But I worked diligently to convince myself that this was nothing like that – this was just a tiny thing – an itty bitty spot that could be fixed with a dab of paint – surely.

Then I went downstairs. 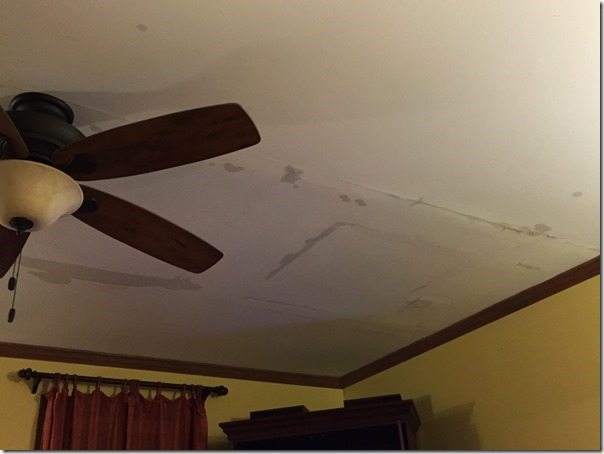 And I called the plumber.

10pm: The after-hours plumber came. He said he needed the water damage mitigation people to come out and remove the ceiling before he fixed the problem – he was way too afraid the ceiling would cave in the minute he started sawing.

11pm: The after-hours water mitigation guy came to get our paperwork signed so they could begin work the next day. He went through the process, which would include eight giant and endlessly loud dehumidifiers for at least four days straight, a ceiling removal, and possibly a bathroom floor removal, depending on how the dehumidifiers went.

I started to explain that I’d just had surgery…

“It wasn’t any sort of respiratory surgery, was it?”

“Oh. Well then we’ll need to bring more machines to scrub the air. And you might want to see if your insurance company will put you up in a hotel. You don’t need to be breathing this air – especially once the dehumidifiers start.”

I began to admit to myself that this was no tiny issue.

All of our guests left and Chris and I went to bed after midnight, patting each other reassuringly and promising that we would live through this, too. At least we still had each other.

The next day, we split duties according to our strengths: Chris wasn’t on Vicodin and therefore could drive, so he took the children to a birthday party. I am (sadly) an expert at all the details and conversations that have to happen with insurance companies, so I stayed home to babysit the demolition crew, start our claim, and arrange our housing issues.

While I made endless phone calls, they did this to my living room: 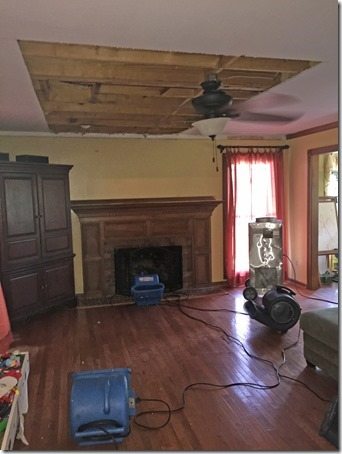 In the process, they discovered that we’d had some sort of leak for a while, as our subfloor was rotted through at the bathtub – you could even see daylight when you looked up. So the current immediate crisis alerted us to a growing crisis that could have really ended poorly if the bathtub had ended up on top of our television armoire. 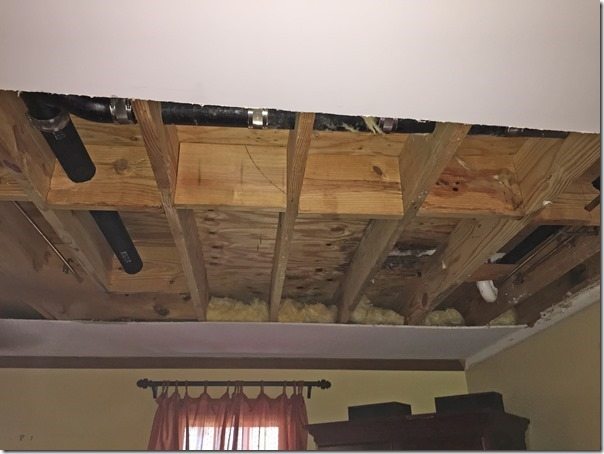 I won’t bore you with the extreme number of phone calls that had to happen to achieve solid plans, but I assure you it was significant, involving a relocation subcontractor and many people at State Farm, and the fact that nearly every hotel in Birmingham was curiously sold out. But just as Chris and the children were pulling back in from birthday fun, I had secured us a two bedroom, full kitchen suite at an extended-stay hotel.

We quickly packed and arrived at the hotel around 6pm, ready to quickly get some dinner and put the kids to bed after their busy day.

The children were elated – they’d just had ten days of playdates while I recovered from surgery, and now had four days in a hotel to look forward to!

Their lives were definitely going their way. 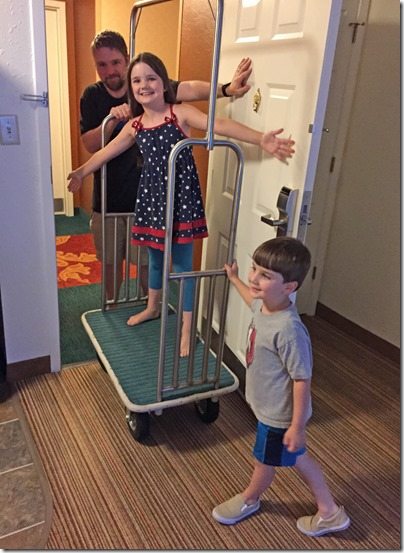 I walked into the hotel room and choked.

The place was full of cigarette smoke, which immediately enflamed my throat, the whole reason we were leaving our house to begin with – to protect my still-raw tonsil-holes.

And I certainly didn’t need to be sneezing.

I called the front desk and asked if they had any other rooms available. She told us she’d check and call us back. We attempted to keep the children contained and from unpacking their voluminous bags. And we waited.

For half an hour.

As the tiny bit of patience I had remaining waned.

Finally, I walked to the front desk, where the one and only employee didn’t seem to have any recollection of our phone call.

And no, they had zero rooms available – in fact, they were overbooked. But if it makes me feel better, the last guy that stayed in our room got fined $250 for smoking in there.

Chris took the kids to dinner while I painfully coughed, had a minor breakdown and attempted to figure out where my life was headed and also where exactly we could sleep that night.

After a few dozen more phone calls, State Farm booked us at the one other hotel in town with a suite available – The Embassy Suites.

I frantically repacked what had gotten unpacked (including Ali putting a dozen hairbands in a drawer), Chris arrived, and we all left for Hotel #2, my mental state more than a little fragile.

We checked in, unpacked, discussed the details of our reservation with the front desk, watched two girls get arrested for having a 19-person party and then vehemently cussing out the hotel staff when asked to lower the number of their room, got the kids to bed, and finally,

I sat in our fluffy bed,

And realized that I, too, with a little work, could join in the children’s exuberance for our staycation.

The next morning I woke up fresh, enjoyed my free breakfast, appreciated the fact that my children got along so well that they were exciting each other even more about our adventures, relaxed in what appeared to be our very own private indoor pool and hot tub, took a walk with the kids to get popsicles and visit the park (which, okay, was less than ideal when Noah got so hot that he started crying and saying he needed medicine and I ended up carrying him, but it was the attempt that counts), and appreciating the fact that I’d have a daily maid to help keep my mind off the deteriorating state of my own home.

Also, I took a moment to be thankful for the fact that we were getting a long-term problem fixed that we didn’t even know about, and hey – it would probably force our hand to give our bathroom a much-needed renovation in the process. At least it wasn’t the bathroom that had just been renovated due to the last flood.

Perspective. It makes all the difference.

(Remind me of that in six months when I’m still living in a construction zone. Okay?)

9 thoughts on “When Adventures Overlap.”