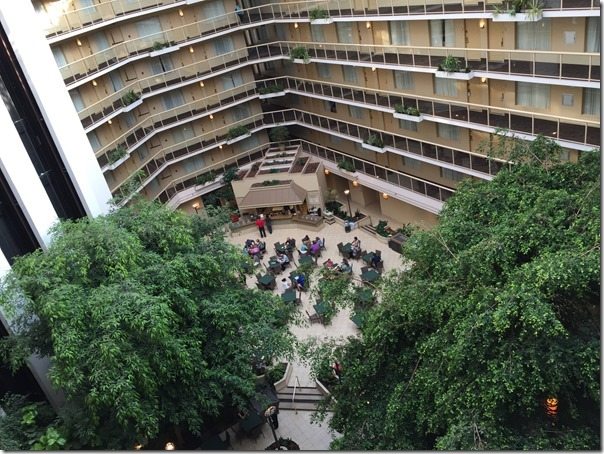 We lived in the hotel from Saturday night until Wednesday night of last week. Although I was quite reticent at the idea of packing up and moving to a hotel room with my children on a minute’s notice during The Crisis, I must say that I got exceptionally accustomed to hotel living. In fact, on the last night we were there, I was kind of sad – I had really gotten attached to our little suite.

Then on Wednesday morning, I woke up to the kids arguing, and realized that they had enjoyed enough togetherness – the timing was right for everyone to have their own space again.

But the fantastic living there part. It was both minimalistic and maximalistic. (Why isn’t maximalistic a word? That should totally be a word.)

– It was minimalistic in that we had no DVR, so we relearned how to watch commercials, but maximalistic because those commercials fanned the flames of my daughter’s raging commercialism, and she created a constantly-growing list of As Seen on TV products that she wanted me to buy her. 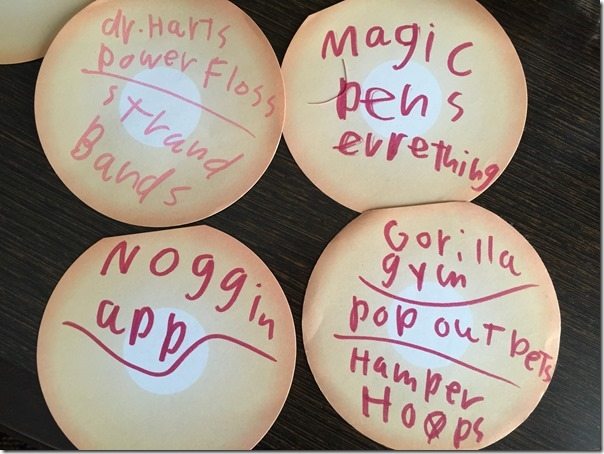 (Who is Dr. Hart and why is he trying to sell Power Flossers to children? This seems wrought with disaster.)

– It was minimalistic to have a tiny refrigerator and no freezer, but maximalistic because there was a “free snack” machine on our floor, for which we had five credits each day. I ate a lot of Reese’s Cups during those glorious days.

We learned a few things about hotels, too. Like the fact that no one hangs around a hotel in the middle of the day, so it’s really fun to sit in the atrium and feel like the place is your own giant mansion, with dozens of Downton-like staff scurrying this way and that. Atrium hotels are the best anyway – they feel so giant, yet so communal. From the breakfast area, you can see every single person going in or coming out of all 280 rooms. (Yes I counted.) A lack of creepy meandering claustrophobic hallways is a huge plus.

Speaking of claustrophobia, it helped that for some reason, George from State Farm (from here out known as “The Sugar Daddy”) put us in a premium suite. It was absolutely giant, so the boxed-in feeling that a four-year-old boy can add to a hotel room was really downplayed. But on the flip side, there was no seating available after the sleeper sofa was pulled out for the children, so I had to make myself a settee out of the discarded sofa cushions and extra pillows.

(Chris accused me of making a blanket fort, and I didn’t deny it.)

We also learned that Noah is THAT kid – the one that talks incessantly to strangers, to the point where they start to get annoyed and try to politely escape his never-ending conversation. Although the accessories he chose to wear during our stay did make him a bit more endearing. 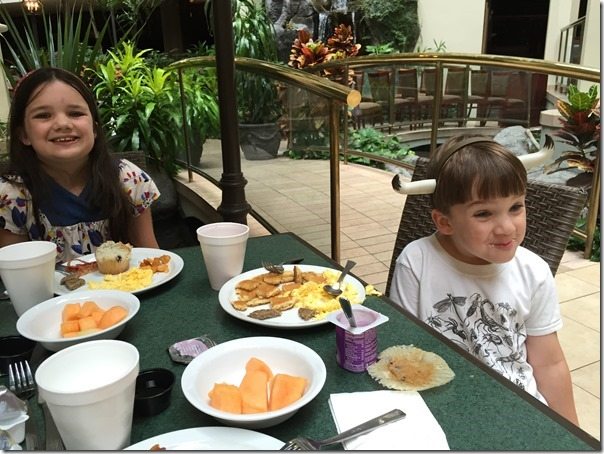 There was the man on the elevator that Noah befriended, telling him all about our leak and living in the hotel. Then, as we all got off on the same floor, Noah added, “We have GOT to show you our hotel room! It is SO. AWESOME!!”

Nothing awkward about that. Or the Stranger Danger lecture the man gave him as we all walked down the same hallway.

Then there was the poor teenager at the pool, Byron. Noah spent the better part of two hours begging Byron to play with him, watch him jump, and watch his cool trick. No matter how many times I told Noah to leave Byron alone, he always went back to bothering Byron.

Every person Noah encountered got the full scope of the damage done to our house, and learned all about our hotel residency. We found out interesting facts because of this, like the fact that the hotel had a recent flood, too, and had many dehumidifiers in rooms, working to mitigate the damage done by a guest who, upon checking out, decided to leave their water running. 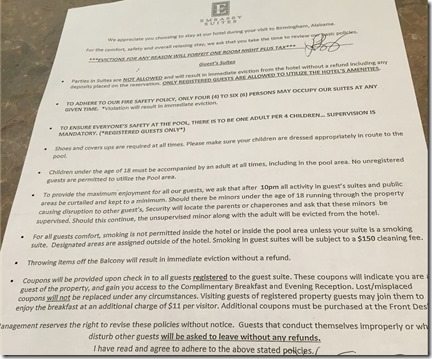 The downside of our hotel was that, as it was an Embassy Suites, its on-site restaurant was Ruths Chris. Not…exactly where you eat as a family just because it’s convenient. That coupled with the fact that I was still on a soft foods diet left the kids puzzled as to why we never entered the restaurant on site.

When we finally arrived home on Wednesday evening, we discovered what true silence is – it is what occurs when four introverts have been living in a hotel room together for five days, and all of a sudden are set free in their home environment.

We each immediately scattered to opposite corners of the house and read, played, and unpacked without breathing a word.

And it was a beautiful thing.

7 thoughts on “On Being a Hotel Resident.”