I’m running out of optional body parts. I’ve had a foot bone removed, my gall bladder removed, and now my tonsils are on the docket.

I mean, what’s left? My appendix, my uterus, and my teeth?

(I always did think that dentures would be easier.)

It all started out like any other sickness – except that it was late. Noah had gotten a “bacterial tonsillar infection” two weeks earlier, so my fate was sealed and I’d been waiting for those mucous guys from the Mucinex commercial to tackle me from behind and beat my throat in.

Because Noah and I have a special relationship – we toss disease back and forth like a phlegm-covered game of catch football.

(Turns out that he has the same immunodeficiency issues that I do, except thankfully way milder.)

(Genetics are such a lovely thing. Except when they’re not.)

Sunday night, I started feeling a sore throat. It was coming. Noah’s had been pretty rough (He didn’t eat for four days), but I irrationally hoped that I would get the lighter version.

I never get the lighter version.

I woke up on Monday morning with a burning throat and a rapidly swelling tonsil. Mine and Chris’ anniversary was the next day and I had planned an Easter party for Ali on Wednesday, so I knew I needed to get on antibiotics as soon as possible. This was not a “Wait and See” kind of week. Plus, it was Spring Break! The children needed an energetic and healthy mother!

At the doctor, I started feeling worse. Chills, aches, lymph node pain. The Mucous Guys were not playing around. He took one look in my throat and gave me heavy-duty antibiotics.

On Tuesday, my fever intensified, and my tonsil began turning an ulcerish shade of white. I hardly sat up all day, repeatedly thanking my children for feeling especially kind and self-entertained.

On Wednesday morning, I knew I was dying. Chris took the kids to work with him, and I showed up at the doctor’s office, no appointment, before they opened. My tonsil was now a gaping white wound, and my aches, pains, fever, and misery had intensified to Level Unimaginable. His best guesses were that I either had Mono (“So you’ll feel like this for a few weeks!”) or an abscessed tonsil (“They’ll need to drain it with a needle and possibly do surgery!”), then took bloodwork to see which it was, gave me a steroid shot and a prescription for pain pills, and promised to call me that afternoon with the results.

I went home to die for a few hours. He called back and said that the bloodwork had disproved both his theories, and that I needed to go see an ENT to find out what he thought the magnificently disgusting camp inside my throat could be.

I peeled myself off the couch and drove to another doctor, sweating through my clothes with fever and praying that I wouldn’t see anyone I knew – I could not have possibly looked any worse than that moment.

I arrived at the ENT’s office, and the receptionist pulled my file and said, “Oh my! It’s been a while since you’ve been here. We’re going to need to update your patient photo.”

Which is why I will forever be known as “That Crazy Disheveled Lady Who Looks Like She’s Been Crying All Day” at my ENT’s office.

I got back to a room, which is where I remembered that an ENT’s office is the most medieval, frightening, Frankenstein-esque doctor’s office in all of modern times. 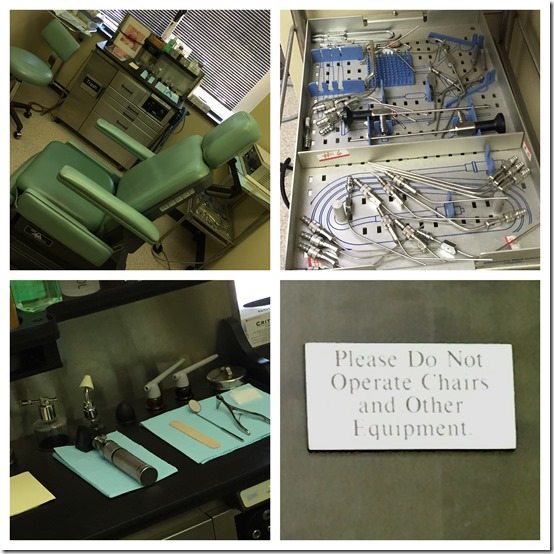 He diagnosed my Throat of Doom as very acute tonsillitis, changed my antibiotic (since my tonsils had been laughing at my other one), insisted that I take the pain pills that my other doctor had prescribed earlier in the day, and told me to let him know if I got worse, at which point I’d probably need to be admitted to the hospital for IV antibiotics.

I drove straight to the pharmacy where from my day’s adventures I had four prescriptions from three doctors waiting on me. The perfectly coifed pharmacy tech with her perfectly applied makeup did not try to hide the fact that she was judging my rather meth-like appearance as she handed me my pain pills and other prescriptions. I wanted to unhinge my jaw and show her my infection-infested tonsils. Maybe let a little drip on her. Just for fun.

But I felt much better after I took one of those hard-earned pills. My aches, fever, and intense throat pain started to fade a bit.

Until the next morning. When I couldn’t talk, the white portions of my tonsils were now larger than the tonsils themselves, and the pain was uncontrollable.

I ended up back in Frankenstein’s Lab Thursday afternoon, where we agreed that I needed to be admitted to the hospital to get my tonsils disinfected and get rehydrated, and then they would need to be removed a few weeks later.

(A very thoughtful med tech explained that removing infected tonsils is like “grabbing at raw hamburger meat on the grill with tongs – bits and pieces stay on the grill and you have to really scrape to get them off”, but removing healthy ones is like “picking up a well-done steak with tongs – it just pops right off!”)

They wheeled me down to admissions, where the lady at the front desk rather boredly looked at my handwritten paperwork. She made a phone call and said, “I need a room available for Rachel…ahem…excuse me – is it Rachel Colon?”

“I need a room available for Rachel Colonham.”

She hung up and began asking me questions.

“Have you been out of the country in the past two weeks?”

“Are you experiencing any of the following symptoms: [insert list of every mild to severe symptom any human has ever experienced]”

“Is it because Ebola?”

“DO YOU HAVE EBOLA.”

I looked down as she signed off on my “Ebola Screening Exam.”

At this point, I would tell you about my hospital stay, but I slept most of it and wasn’t exactly lucid the rest of it. Those are 24 hours of my life I’ll have to piece together with my hospital-drunken photography.

There were some delightfully prepared liquid meals, 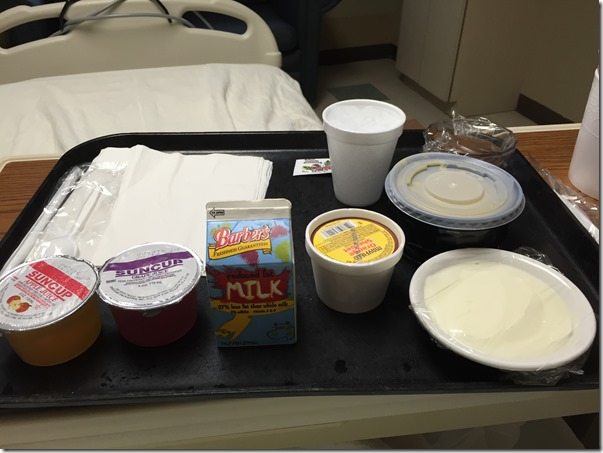 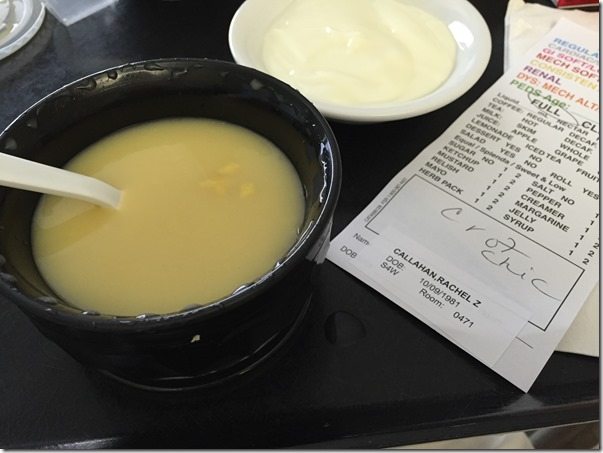 A dirty-windowed view of Quinlan Castle, 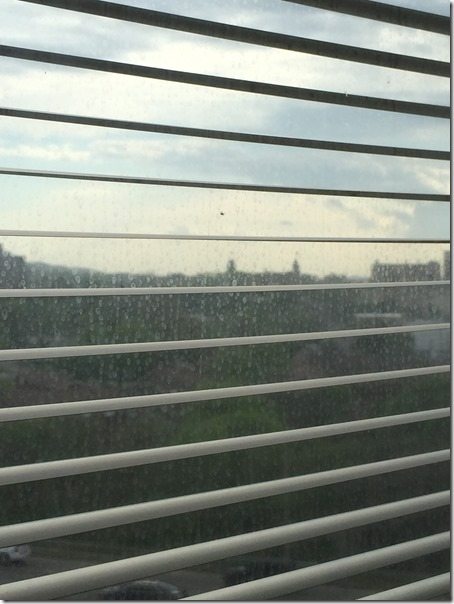 A cryptic sign that, during my drug-induced state of paranoia, I wildly hypothesized about its meaning. I was fairly positive that the letter represented the amount of suspicion they had that I was just there for the drugs (that mean little Pharmacy Tech had made me paranoid, after all.) 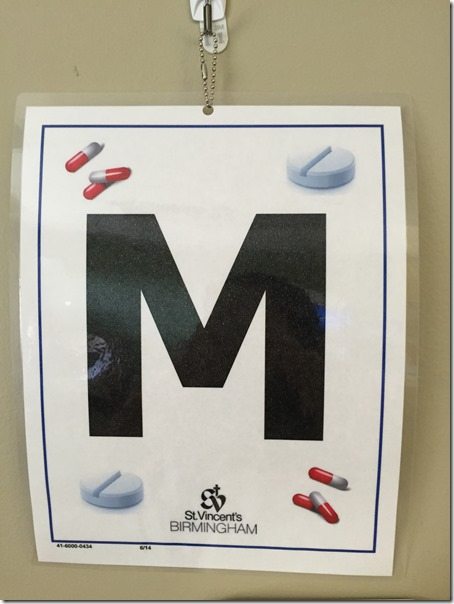 I heavily interrogated one of my nurses as to its meaning, and he said “I dunno – it’s just something dumb.”

AND I WAS MORE CONVINCED THAN EVER.

And finally, an information board that was lovingly decorated by my husband (with his own dry erase markers that he brought from home. Because he’s nothing if not prepared.) 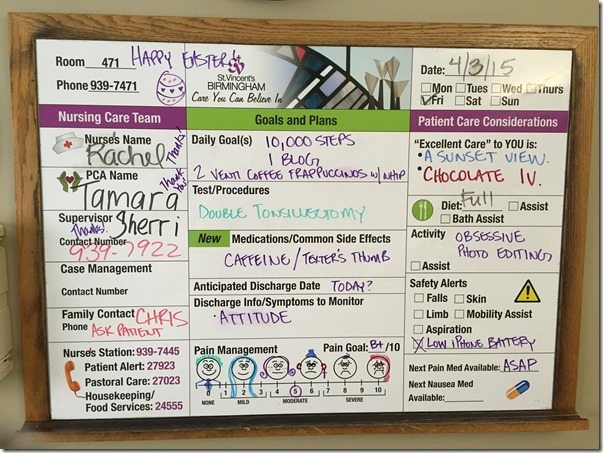 They released me Friday afternoon, at which point I continued my habit of heavy napping at home.

On Saturday, I finally awoke from my near-coma and was shocked that Spring had come while I had been dead. Every tree was green, the birds were everywhere, and my porch had approximately one inch of pollen on it.

I started the day by looking down my throat, like one does, and saw that part of the thick white coating on my right tonsil was sticking straight up.

I went to the kitchen and fixed myself a cup of water and drank. And I felt something large slide down my throat.

I looked in the mirror again. It was gone.

After a moment of gagging and freaking out over my act of masocannibalism, I began to breathe normally and casually texted Chris, who was at an Easter party with the children. 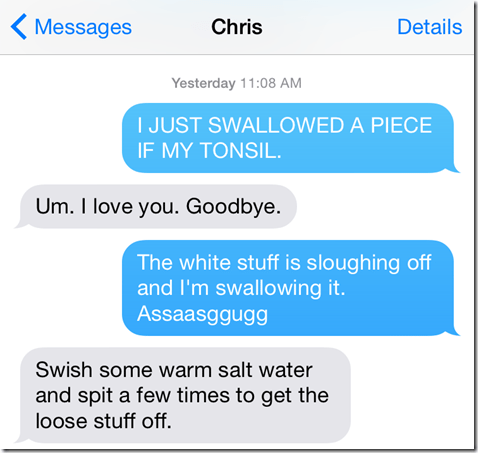 I took his advice and was simultaneously relieved and disgusted by the results.

But the birds were still singing, the sun was shining, and I hadn’t been outside in literally a week. So I set off on a walk.

Then, when I decided I wasn’t going to black out right away, I started running.

I was running from my week, from my pain, from my tonsils, and I felt invincible.

Then the breathing and the jostling began the real process of peeling back the layers of my tonsil.

Let me say that I’m not a running spitter.

But when you have gigantic pieces of infected tissue continually coming loose in your mouth, you become a running spitter.

And it felt fantastic.

I was running, head up, arms out, relishing the moment of freedom from Tonsilitis, proud of myself for running 18 hours after getting out of the hospital, basking in the glory of a normal spring day.

I am literally and metaphorically hacking out infected tonsils! And it feels amaaaaaaaazzzzOOOOMPH.

Which is when I tripped and fell.

So the moral of this story is: Acute Tonsilitis can lead to scabby knees on Easter Sunday.

18 thoughts on “The Epic Battle Of Tonsil Hill.”