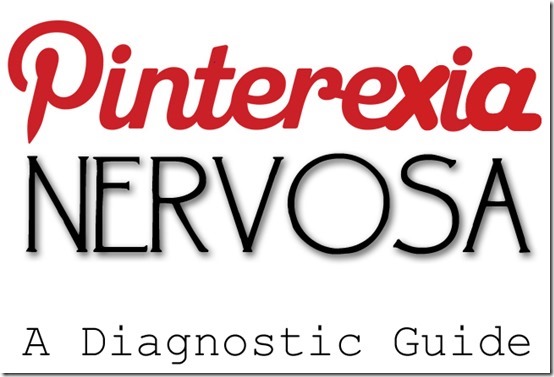 Pinterexia Nervosa is a body/home image disorder in which people have an intense anxiety over ensuring that their life is completely pinnable at any moment. This disease is most often diagnosed in women and most prevalent post-childbirth, as the quantity of contractible symptoms grow when children are involved.

What are the Symptoms of Pinterexia Nervosa?

How is Pinterexia Nervosa Diagnosed?

If your doctor thinks that you may have a Pinterest Disorder, he or she may compare your outfit, hairstyle, house décor, and closet organization to that of a normal person of your age and Natural DIY Tendency. Your doctor may also investigate your children to ensure that no more than 30% of their wardrobe is upcycled from your old clothing and no less than 60% of the items in their bedroom are actually toys and not untouchable art pieces. They may also quiz them to make sure they are aware that fruit does not have to be eaten only in rainbow-order kabob form, that clothing doesn’t grow on trees already monogrammed and smocked, and that crayons are for coloring, not melting.

How is Pinterexia Nervosa Treated?

All people suffering from Pinterexia need treatment. Even if you, your friend, or (heaven forbid) your husband have only a couple of the signs of a Pinterest Disorder, seek professional help immdiately. Early treatment offers the best chance of overcoming Pinterexia.

Treatment will most likely include a deleting of the Pinterest app on all of your devices and contacting your ISP provider to block any attempts at visiting Pinterest’s website. For advanced stages of the disease, blocking of Facebook and Twitter may also be necessary, as certain enabling people tend to double-post their pins to these social networks. In extreme cases, your house may also have to be treated, de-organized, and sanitized from all Pinnable Projects.

One experimental therapy (only available in Mexico) is Normal Life Reentry Therapy (NLRT), where you are forced to wear only solid beiges, blacks and whites, only served ugly foods (goulash and curry are generally recommended with Monkey Bread for dessert), are required to have your kid’s birthday parties at Chuck E. Cheese, and are not allowed to be anywhere near mod podge, stencils, balloons, edible paints, scrapbook paper, or the letters D, I, and Y.

What is the prognosis for Pinterexia?

Long-Term recovery from the disease is rare, and when achieved, is typically promptly followed by a relapse when the patient feels the need to pin an infographic on the steps they took to overcome their Pinterexia.

Remember: early detection is crucial. Know the signs. Perform self-checks regularly. And talk to your doctor about any symptoms or concerns.