It’s been fourteen years, celebrated by a trip to Savannah last weekend. Fourteen years happened to mark the time period where our perceived age and length of marriage crossed over a precipice together: after asking how long we’d been married, everyone looked at us like we were lying and/or possibly the victims of an arranged marriage at the age of twelve.

Which can only be good for my personal perception of my aged appearance, I suppose.

But it brought back lovely memories of our honeymoon, where everyone asked us how old I was and we said 19 and they recoiled and then looked very much like they wanted to ask if my parents had approved of this ludicrous union.

It’s been a good fourteen years. We don’t permanently disagree about much – only room lighting, Doctor Who, convertibles and the resulting hair carnage, iced coffee, Siri, arriving at 7pm football games before dawn, real or fake Christmas trees, whether or not one should be allowed to burp audible words – but the rest of the things we used to disagree about typically end up in an agreement after enough years.

For instance, when we married, Chris only had vague reference points as to what a vegetable was. On this trip, of his own accord, he ordered an egg white omelet filled with fresh tomatoes, spinach, and goat cheese. And – that’s right – no meat.

(Not to say he didn’t have plenty of meat on the side. Obviously.)

And I – I had zero interest in running with Chris five years ago, and regularly shouted such strong opinion here and to him. Yet on this trip, I ran 18.5 miles with him. And walked another 10. And loved almost every minute of it.

The almost is so very important here. Because our trip was filled with all sorts of delightful agreement – except for that almost.

We ran in Macon, Georgia on Wednesday, and Chris said “Don’t run too hard – I don’t want to wear you out before you can experience the beauty that is running on the Atlantic beach.”

We ran in Historic Savannah on Thursday, and Chris said, “Don’t push yourself! Tomorrow is our beach run day. It’s going to be FANTASTIC. You will be amazed at how wonderful it feels!”

On Friday morning, I awoke to him throwing open the hotel room curtains with gusto and excitement for the blissful day to come.

(Aside: according to Chris, I was already rousing and he was just “moving things along.”)

Needless to say, I woke up all wrong. My Dysautonomia medicine also wasn’t doing its job, and my head was all swimmy.

And I was EXHAUSTED. And sore.

And I had no coffee. Or breakfast.

I groggily attempted to pull on my running clothes, but running was the last thing I desired.

But, running helps my Dysautonomia and that’s the reason I do it, so I trudged on.

I whimpered as I wriggled into my shoes. No, no. This was the sort of morning that one stayed curled in the hotel bed and reveled at the silence that is The-Children-at-the-Grandparent’s.

But I finally managed to rouse myself enough to slump to the elevator. Rather sullenly.

Chris was hopping like an excited puppy, giddy to introduce me to his Beloved.

But, noting my state of mind, offered to get me coffee and breakfast on the way.

We arrived at Tybee Island, and I felt slightly better. His giddy was not rubbing off on me, but I was trying to mentally join him. Really, I was.

We walked out on the beach, and he said, “Oh! Let’s go sit on that bench in the shade for a minute and get a selfie. We must have a selfie to remember our first beach run together!

It was an old wooden swing, attached to a pitched roof and lodged into the sand many years prior – perhaps when the sand was at a much lower altitude. It would have been nice if I’d noticed this. I headed toward it, trying not to allow the softer sand to seep into my running shoes and surely ravage my feet. I was alternately staring at the ocean and my feet as I approached the bench.

Which is when the side of my forehead met the corner of that wooden pitched roof. It was not a near miss. It was a direct hit. They became intimate.

I screeched and fell into the sand, my world starry and spinning.

“What? What happened?? Did you just…run into the roof??”

The pain was intense. I laid in the sand crying.

After a minute of sand-writhing, I stumbled over to the bench, dramatically ducking to get to the swing with much whimpering and sniffling. I sat and attempted to compose myself as Chris had a silent Griswold moment of despairingly reflecting on his perfect plans gone to crap.

“We don’t have to do this. I didn’t mean to make you come out here. I know you don’t feel good.”

Because this is what happily married people do: they repeatedly lie about their true feelings in order to make the other person happy, and then it all falls apart and no one is happy.

I felt the angry goose egg rising on my forehead, glared at that swing and its ridiculously low roof and tromped to the shore where we began to run, me still sniveling and Chris wisely silent.

I ran hard, hoping to run away from my emotions and my morning. But running hard on sand is like running through peanut butter. Its grasp of gravity is at least four times what it is on the rest of the earth.

Then the shore started sloping drastically downward, and running at an angle is my least favorite.

Which was the exact moment Chris tried to cheerfully say, “Your Physical Therapist would so approve of this running surface. Isn’t it wonderful? So flat and giving!”

I took a turn at silence while wondering from whence planet my husband was created, as I fought with the sand to let go of my every step while not tipping over from running like a Mountain Goat.

I avoided jellyfish, jumped over flying nasty ocean foam, crunched across sharp shells, ran out of my way to angrily kick a small red ball (I just thought it was a random ball until I saw the two indignant guys whose Bocce game I’d just ruined) (and also Bocce balls are heavy and so then my toe was also mad), and made it exactly 1.85 miles before my possibly-concussed state overcame my Angry Running.

And I sat down on the beach, leaned my head into my knees, and, as my husband described later, “Roly-Polyed onto the beach to cry.”

I managed to get myself together and tell him, “Let’s go to the 2 mile point and turn around. Then I want to go to the hotel and lay down.”

“Are you sure you don’t want to stay here while I run back to the car and come get you?”

“Okay”, he said quietly – which were the last words he spoke to me on that run. Wise – so wise.

The third mile was the worst, because I was on the slanted portion of the beach going the opposite direction, except now it was my twice-surgeried foot taking the brunt – and it simultaneously became completely numb and throbbed with pain.

But I made it back to that blasted bench with its stupid-low roof and sat, while Chris stretched on the lifeguard chair nearby. 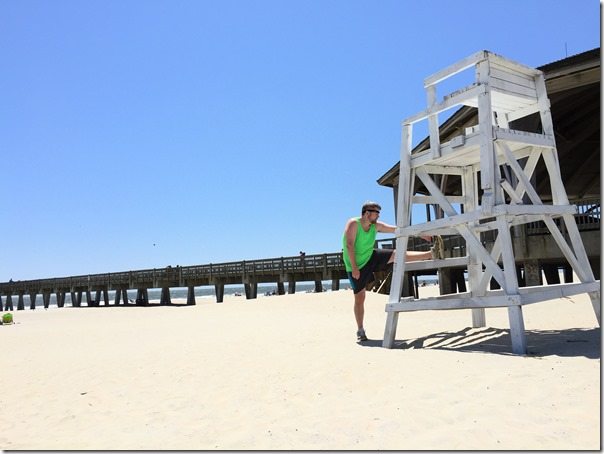 Then I told him the truth about life.

“Beaches are for laying out on and playing in the water. They are NOT for running.”

“I mean seriously. Even if I wasn’t injured and sick. That was the most awful run ever.”

“Got it. I can do beach running by myself.”

“Do your feet not sink painfully into the sand with every step?”

“I promise never to ask you to do it again. But let’s get that selfie. To commemorate the one and only time you ever ran on the beach with me.” 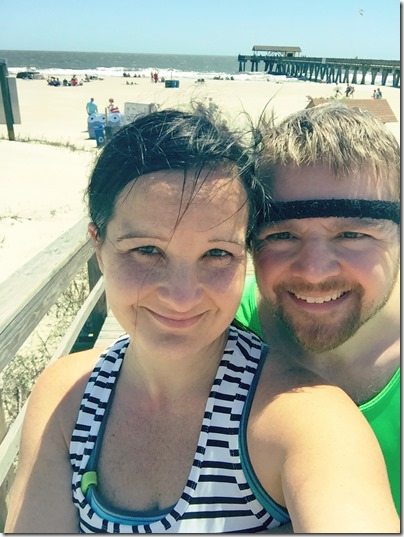 If you look closely you can see my extremely lumpy forehead. And the despair in my eyes.

And that’s how our list of disagreements became one item longer.

12 thoughts on “On Disagreements and Marriage.”