We’ve been watching VeggieTales’ newest movie, Noah’s Ark, on repeat at our house for the past couple of weeks, and they sent us a couple of DVDs and Bobs to share with you guys! 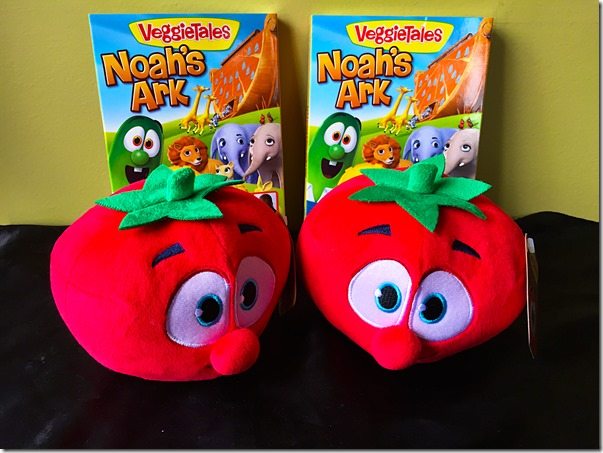 Ali loves this movie because she gets all the humor (or most of it – but they always put those nuggets in there for us parents.)

Noah loves this movie because he can read the title, since it’s the one word in the universe that he can read.

And I love the movie because the main character (Shem) is voiced by Wayne Brady, and it brings back fond memories of our pre-kid days when we used to watch hours of “Whose Line is it Anyway?”. Every time the movie starts, I have a strong urge to find Whose Line on Netflix and binge watch it all night long.

(Except that I don’t do anything all night long. But we’ve already discussed that.)

Obviously, the movie has been a huge hit in our house, and has even inspired some rather artistic diary entries by Ali. 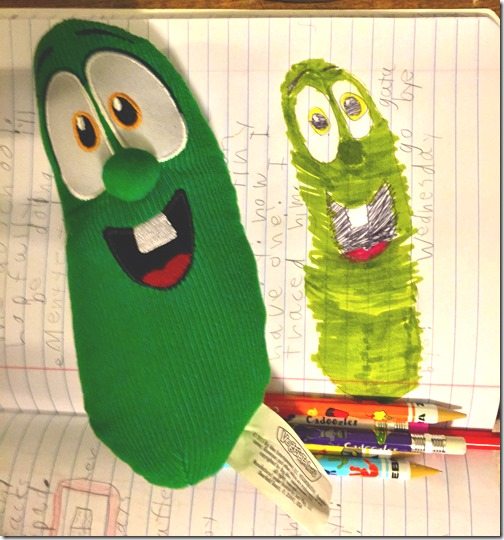 Which, in turn, inspired me to use this as an opportunity to let her have a fun day of school centered around the movie – and slip in a writing project at the end.

Because that’s what us homeschool Moms do. We exploit fun and turn it into school.

Ali and I just studied about how to write a book report in her English curriculum, so I explained to her that she could, in the same way, write a movie report. I sat her down in front of the movie, gave her some paper and a pen to take notes on the things that she wanted to write about, and then after the movie, we discussed her findings and constructed a movie report together. She then wrote it out for you guys.

So, I give you, Ali’s very first Movie Review. 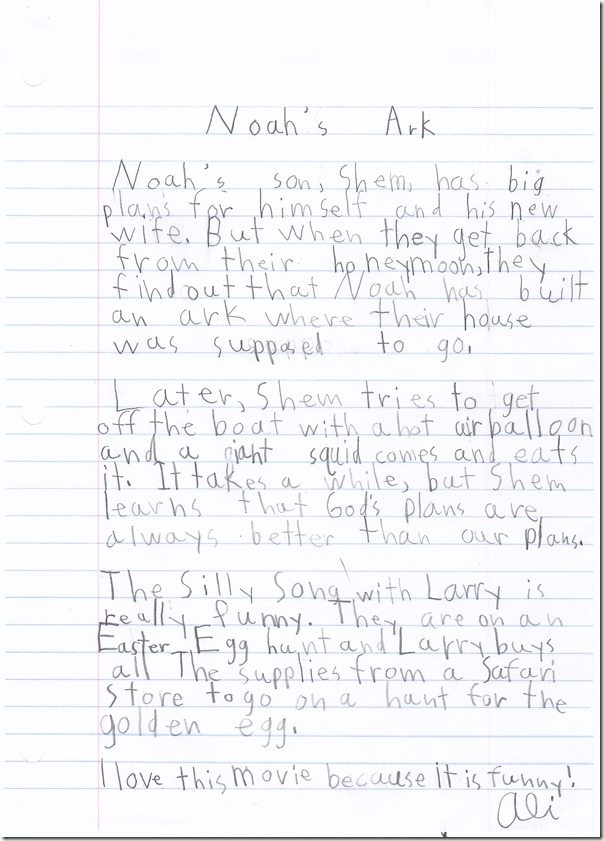 Giant squids and honeymoons and Easter Egg Hunts. If uppity movie reviewers would just finish their reviews with “I like this movie because it is funny!”, the world would be a better place.

If you’d like to win one of the two DVDs and Bobs that I have to give away, simply comment on this post! You have until March 18 to enter, and the two winners will be emailed and announced on my Giveaway Winners Page on March 19.

Disclosure: We were sent a copy of Noah’s Ark to review and enjoy, but Ali’s opinions are her own – as are mine.