My life has been the definition of “train wreck” lately.

Nothing devastating or life-changing – no worries. Just a constant onslaught of sicknesses and injuries and roadblocks and traumatic doctor visits.

The upside is, they often make good blog posts.

Y’all have read about some of them, but I haven’t written about a lot of things because I have a rule for myself – never write about something until you’re on the other side of it – otherwise, it comes out whiny.

And nobody likes to read whiny.

(A rule I clearly broke with my Printing Woes. But hopefully Sukhad added the humor back in for me.)

Anyway. One very special blog reader, Melissa, from Prosser Washington, picked up on the undertones of my rather unpleasant start to 2015. And she commented after this post that she was going to send me some chocolates, thereby solidifying her spot as my Best Friend Forever [That I Probably Won’t Ever Get to Meet].

Because by chocolates, I knew she meant Chukar Cherries.

I knew this because she had sent them to me once before. AND THEY CHANGED MY LIFE.

They’re made in her hometown, and they’re basically the most luxurious chocolate-covered dried fruits and nuts ever concocted. All the combinations are divine, and the flavors they put together are the essence of chocolate fantasies. The last box she sent me contained eighteen different varieties of heaven dipped in chocolate.

After receiving them last time, I also started getting the catalogs. And with each one, I nearly ordered myself another box (to hide from the children and eat embarrassingly fast), but always somehow intervened before I delved into what was sure to become a serious addiction problem.

So when the Melissa mentioned a box of chocolates, I was pretty intensely elated.

The hope of those chocolates carried me through finishing my Kid’s Market preparation.

They carried me through recovering from a sinus infection.

They carried me through the mothering of sick children, blowing their noses on my pants, wiping their boogers down into my shirt, and hacking all night long.

They carried me through falling while running and injuring, bruising, or scraping every joint on my body, and the resulting physical therapy.

I knew that Washington is a long way away and it would probably take a good bit for them to arrive, but the hope of chocolate covered cherries and berries and pecans and hazelnuts in eighteen different varieties carried me through.

Until I got an email from UPS, telling me that they needed to let me know that a package headed to me from Chukar Cherries had a slight problem.

MY CHOCOLATE WAS IN A TRAIN WRECK.

I read that email three times, and then contracted an unstoppable case of the giggles. If there was anything more fitting for my life at that juncture, I could not possibly imagine it. The chocolate I was receiving because my life was a train wreck got caught up in an actual train wreck and I’m pretty sure the space-time continuum folded in on itself.

I started checking the UPS status of my cherries, waiting to see when they would resurface, imagining a UPS worker walking along the side of a train track, plucking chocolate covered cherries out of the grass and placing them, carefully sorted, back in my trays.

(Because there are totally roadside chickens and cows next to all train tracks, just waiting for derailments and the resulting chocolate spillage. Right?)

The above email came on March 3. The shipping status of my package did not update again until I received this email on March 9.

My poor cherries, after having been spilled onto a rickety train trestle spanning a crocodile-filled ravine, were now encapsulated by a snowstorm, shivering their fragile chocolate coating off.

Or perhaps, they were stuck in a Sharknado – after all, it didn’t specify the weather type.

Until somehow, they weren’t. UPS fought train and snow and sharks flying through the air and my chocolate dropping off the grid for over five days, and still managed to deliver those precious, life-giving chocolates – just one day after they were originally due. 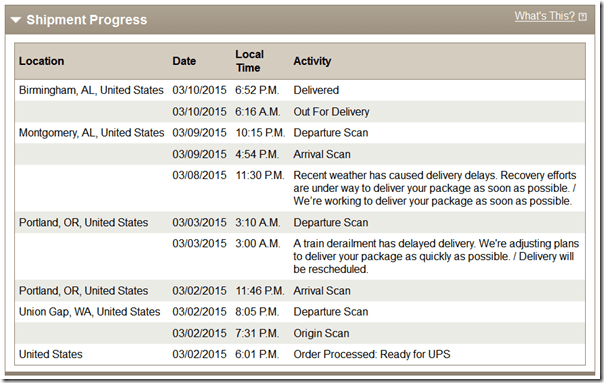 When the box arrived, my warm tingly heart burst within me. 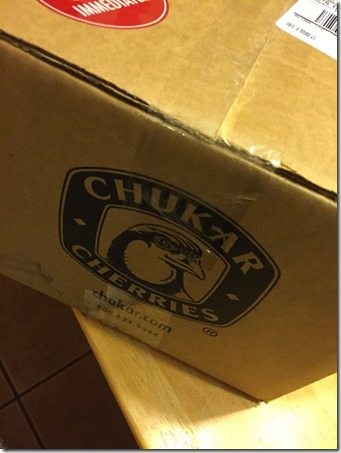 I wish I’d gotten a better picture of that big red sticker – it said “Perishable Goods – Open Immediately.” But I didn’t have time for good photography – I had a package to open. I had chocolate-covered cherries to rescue.

They had been through a lot, after all.

Oh, the bliss of discovering that Melissa, Fairy Godmother of the Blog Realm, had indeed sent me that giant box of utopia again – along with a couple of other precious, blissful, renewing treats. 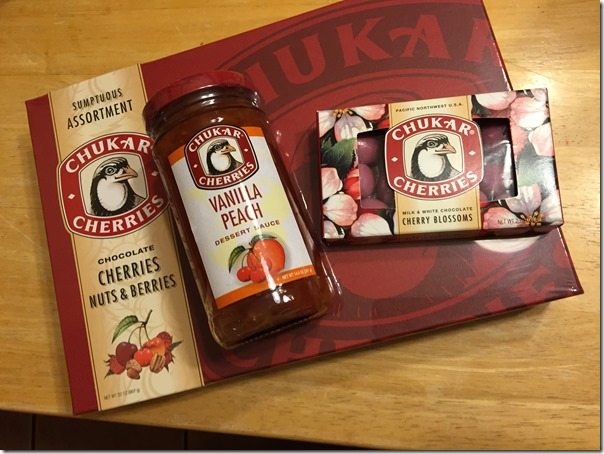 The endless array of beautifully coated goodness made up for all of the train wrecks – both figurative and literal. 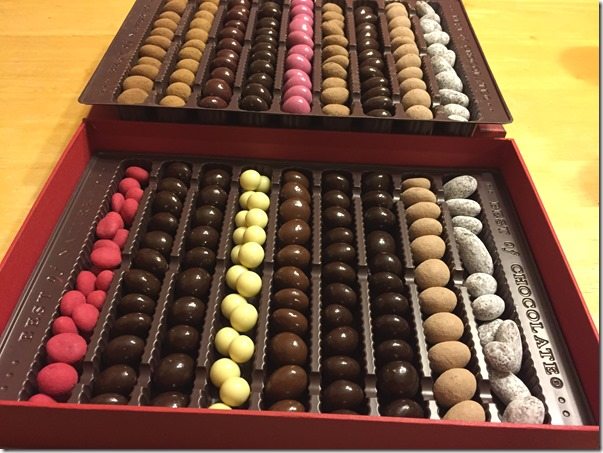 They carried me through running a half marathon perfectly fine, and then reinjuring myself the next day during my “recovery run”.

They carried me through not being able to walk for two days, then finding out that I would have to go to Physical Therapy 2-3 times a week for 6 weeks.

They carried me through multiple technological breakdowns – including those blogged and those only shared in Facebook comments.

And they’re still carrying me through. And doing a darn good job of it.

So from now on, when my life starts spinning off-balance like a washing machine whose drum came loose and is shaking the house down with its ear-shattering rhythm, I shall not waver at the thought of ordering myself some chocolate covered cherries – because mothers are best fueled by good chocolate. And Chukar Cherries most definitely balance everything out.

(Even if they have to survive their own train wreck to do so.)

17 thoughts on “Cherries, Take Me Away.”