Preschool has been a treasure trove of puzzling stories and observations from Noah. Since his godmother is his teacher, it’s been an unspoken agreement that I will text her Noah’s version of the events of the day, and then she texts me back with what actually happened.

Disclaimer: Names have been changed to protect the innocent. Or not so innocent.

As Noah is an introvert, he is usually silent when I pick him up, and the stories start trickling out as the day goes on. But one day he was bursting to tell me this story, and started it before I even had him buckled in.

I really appreciated his storytelling cadence. He controlled the narrative to allow me to feel the moment alongside him – to experience the emotions of what he and his classmates must have felt while observing what they were sure was poop in their classroom.

Upon relaying this story to Miss Janey and asking how “Joe” managed to get blamed for it, she said that it was indeed mud, but that Joe had just come out of the classroom bathroom and announced that he had pooped.

I’m sure the smell wafting through really helped the storyline along.

This same “Joe” also seems to be good at telling fantastic stories. Last week, this was the report:

“I played with my favorite friend today, Joe.”
“Yeah? What did y’all talk about?”
“About the time he got run over by a train.”
“How exactly did he manage to do that?”
“He was standing on a train track.”
“I think he would be dead if that happened…”
“Nope. He didn’t get deaded and he didn’t even cry! He’s so brave.”

They have many classroom sayings that they repeat back and forth. I’ve learned a lot from these.

We got home late for nap one day, and Noah said,

“I’m too tired to walk. I need you to carry me!”
”My hands are completely full. I can’t!”
”I guess I’ll have to lay down on my own shoulder, then.” 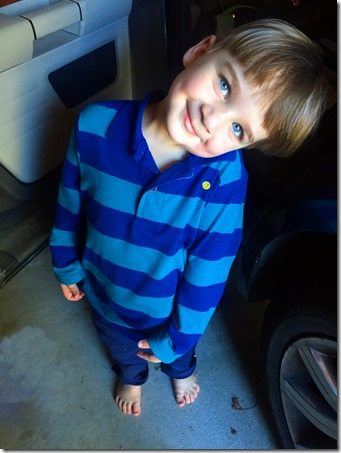 “I put it somewhere you will NEVER find it!!! In my room. Underneaf my bed.”

“If I burp, that doesn’t mean I’m sick. That just means I’m excused.”

One day, I was trying to convey great truths to Noah.
”God made you special. Did you know that?”
”I don’t want to be special – I want to be cool. God made me just…cool. Race cars are cool.”

A neighbor we’d never met was walking by our house one day. He stopped to talk, and after a few minutes, he turned to Noah and said, “How old are you?”

Cynical and cryptic. It runs in the family.

For the record, I’d allowed him to try bubblegum a few days before. It went like this.

After about four rounds of this, I told him “I don’t think you’re old enough for bubblegum yet.”

And ever since, that statement has defined his existence.

From the backseat, Noah had a brilliant idea.

“If you died when it was dark then Daddy wouldn’t have to go to work the next day! That’s a good plan.”

Finally, a couple of deep thoughts from Ali…

“Noah’s more of a silly than a jokester because most of his jokes are just yelling ‘poopy’.”

“I really love the new superpower I’ve discovered that I possess. I can see through the windows of cars and look at the people inside!”

“Do you think that reading the words on grave stones would give me ideas for my Christmas List?”