I have been up front and honest with you many times about all of the things I forget to do, put off doing, or downright neglect when it comes to my role as a mother.

I’m not the most thorough, organized, on-top-of-it person out there, and my parenting is no exception. It often looks as messy as my office closet, and I hope that one day my children can forgive me for my grievous sins against them. By my practice of exposing of my shortcomings here, I also hope that perhaps I can help one of you remember something you might need to take care of.

Which is what brings us to today’s PSA. Quite accidentally, I discovered a giant, moon-sized hole in my parenting.

One of my children – I won’t say which to protect their identity (let’s pretend I have twelve children for the day) – has had a problem for quite some time. A rather embarrassing problem – one that Chris and I couldn’t seem to get this child to stop doing.

There was an issue of constant fidgeting and picking at a certain item of underclothing.

After weeks of reminding – nay even nagging this child to please refrain from this activity, said child looked me in the eye with a kernel of wisdom beyond their years and said, “I think it’s because they feel so tight all the time. Could they all be too small for me?”

My eyes widened, stunned by the logic and insight pouring from such a tiny mouth.

I had never bought this child any new underwear. Since this child was potty-trained many years ago, they had been slowly growing out of their provided underclothes, just as a tree root slowly grows through a sidewalk.

This. THIS is the kind of sub-par crappy parenting that I bring to the table.

Guilt agitated my soul like a washing machine set on stain-removal. And I immediately set out to Target to correct my grievous sins.

But which underwear should I buy? I hadn’t bought any children’s underwear in this particular gender in many years. Which were most comfortable? Which would provide greatest ease in wear? Which would abolish wedgies?

So I bought them all.

Because a guilty conscience carries a big checkbook.

A guilty conscience also needs a safe place to seek reassurance, so I texted my friend Katherine and confessed my Sins of Motherhood. Her response was triple antibiotic on my wounded soul.

Oh that? Yes. It only cost us four separate co-pays and a visit to Children’s Hospital South for a GI scan to rule out colon cancer. Sorry – I thought ALL families did that before they bought their children new underwear.

I pursued her on this issue of negligence. Upon which of your four children did you commit this omission?

[Kid X] got the four visits and GI scan, but we also made a doctor’s visit for [Kid Y] as well.

If Katherine can make this mistake twice, then I can make it once. Right?

I came home from Target with a fresh spring in my step and presented my wise, neglected child with an armload of underthings and explained that if said child would track the efficacy of the different types, I would make sure to buy more in the best variation of underthings to properly ensure that comfort could finally be had – something denied to that child for far too long.

I then explained the meaning and importance of the concept of Unbiased Scientific Analysis. Because the thing was, some of the items of clothing in question had favorite cartoon characters on them – but this fact should not afford them a greater review than a pair that was, say, a solid color. Scientists must not be driven by the wind. Or by Elsa, Queen of the Wind.

The child looked at me with those same serious, wide eyes, agreeing to the importance of the task at hand.

“But how will I remember which were best? How will I keep up with such important information?”

“Don’t worry, dear child. I will make you a chart.”

Again showing my egregious negligence, I did not take time to find a ruler for a straightline, nor even did I simply draw slowly enough to have consistent lines. But I am what I am. And thankfully, the child was pleased with the chart and excited to get to work on the research project.

(Although the child was a bit critical of the fact that some of my questions were rather redundant.)

The child filled out the chart with the care of a Ph.D. candidate, even caring enough to count the number of wedgies created by each variety in a 24 hour time period. 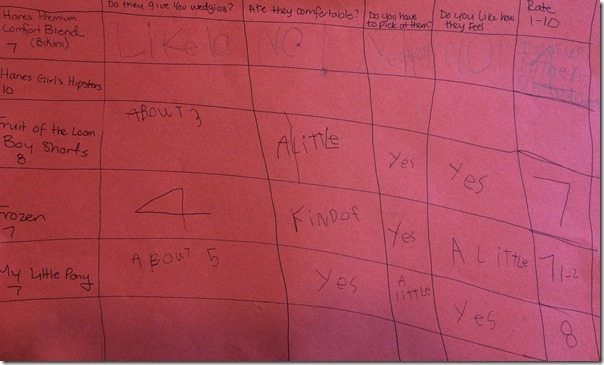 I wish the first line wasn’t filled out in pencil so that you could see the reasoning behind the sad rating of 1 – “I got up in the middle of the night to change” – yes, they were that bad. But this vital piece of data is why it was worthy of its own chart.

But most importantly, all embarrassing habits ceased immediately upon the reception of these gifts.

Dearest friends, this is your wake-up call. Buy your children new underwear once in a while.

42 thoughts on “A Public Service Announcement, for Parents.”