I woke up yesterday morning holding a handful of vomit.

I quickly took in my surroundings, trying to orient myself as to how I had come into possession of someone else’s stomach contents. There was a screaming toddler sitting on his bed in front of me, his carpeted floor was dotted with stepping stones of puke, mysteriously going to the door and back, leaving one to wonder where his journey of bile might have taken him. And myself – I was in the center. Holding puke, puke on the bottom of my foot, sitting in puke.

This was not what I had in mind for an alarm clock. In fact, I had asked Chris the night before to move my phone to my bedside table when he woke up so that I didn’t have to jump up and run in the bathroom when my rare alarm clock did go off at 7:30.

[I can’t sleep with my phone in the same room. We need space for our co-dependent relationship to function.]

Jumping up to turn off my alarm clock now sounded delightful compared to my current frozen position. Because what exactly does one do when they awaken to realize they are coated in a potentially pandemic contagion? One does not move.

“Maybe this is to save Noah from becoming the next Brad Pitt,” I reasoned to myself in my sleepy subconscious.

Earlier in the week I had rather inexplicably volunteered my son to be in a local commercial. I had been confused by my turn of events – it wasn’t really my thing to attempt to go out of my way to make my life difficult, as I certainly had done to my Father when my own childhood movie debut consisted of me riding on the same Merry-Go-Round for four hours straight with a doll that I despised.

The thirty minute screen test for this potential four-hour commercial shoot of Noah’s was scheduled for The Morning of Puke, hence my alarm clock in the first place. And clearly this commercial would have skyrocketed Noah’s career instantaneously, propelling him to become The Male Shirley Temple of the twenty-teens, and would’ve led to a life of screaming tween girls, Disney Channel sitcoms, addiction, ten million SnapChat followers, stringy hair, and being not-married to a scary woman with giant lips that could certainly beat him up if she pulled out her Lara Croft outfit.

(I know Mr. Pitt wasn’t a child-star but this is Noah’s story, not Brad’s. Keep up.)

So it was best that I was holding a handful of vomit. Because nobody wants Angelina as a daughter-in-law – I can’t compete with that. Even if I was the one who had held his vomit.

Chris had been downstairs about to exercise then leave for work, and he’d heard the guttural screams (whether coming from myself or Noah, no one will ever know), and thankfully trailed my sleepwalking puke-catching self and had the presence of mind to bring a trash can. I shook the contents of my hands into the receptacle and muttered something about Knox being a gelatin and Zahara being a desert and neither being a proper name for a grandchild anyway.

My second thought was my weekend. My enablingly-doting husband had arranged to take me away for a day and night, as I had been feeling suffocated by my children and hiding from them on a more regular basis than typically necessary. This hiding had been sponsored by a six-day nap-strike on the part of Noah, who would follow his non-naps with extreme sleep-deprived grumpiness and then fall asleep immediately upon entrance to an automobile.

And now he was potentially contagious. Ready to spread his lovingkindness to every family member and stretch this particular breed of hell out until we were no longer able to escape his toddler grips this weekend.

Was it a stomach virus or food poisoning? I secretly hoped for a mild case of food poisoning – food that he had picked up off the sidewalk and eaten alone.

1. Chick-Fil-A PlayPlace (In which he blessedly didn’t require a rescue – but was that because he was too busy licking every surface?)
2. The Neighborhood Playground
3. Playing with Bird Placentas (That’s on everyone’s list of why-is-my-child-sick, right?)
4. Sunday School
5. Drinking out of a sippy cup he found under the car seat or under a park bench or in the trash can

I spent the rest of the day attempting to catch the remains of Chicken Nuggets as well as I had whilst sleepwalking. And with any energy left over, I obsessively crafted slipcovers for my valuables to protect them from my Valuable’s bodily fluids. 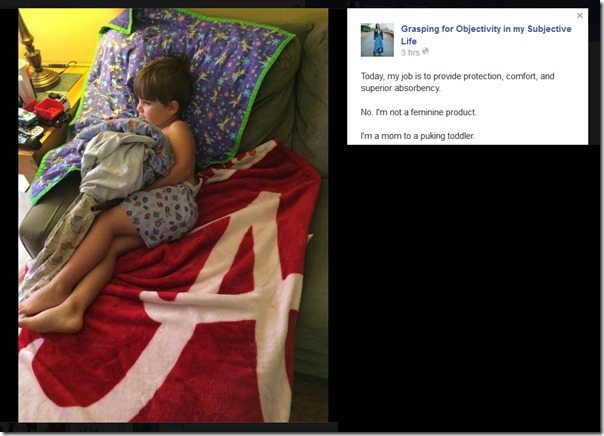 And then naptime came. I curled up next to him in his bed to get him settled in, and he immediately started snoring.

Nap. The sweet sweet aroma of nap. It took an upside-down stomach to bring it back, but…you get what you pray for.