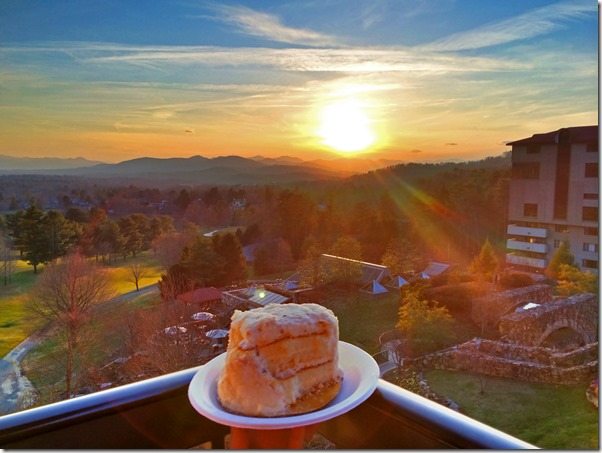 Topper got to enjoy every aspect of Asheville, The Grove Park Inn, Sunset Chasing, Chocolate Shop Visiting, and we even took him to The Biltmore Estate. 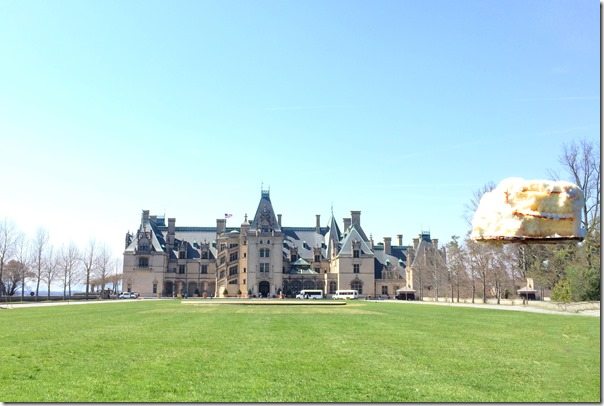 I’m waiting for them to contact me to tell me that he was the first wedding cake topper to visit their fine estate, but in the meantime, let’s assume as much.

(For the record, this isn’t the most ridiculous thing Chris and I have ever done together. It was probably making this meat bouquet. Or lying our way to the top of a skyscraper still under construction.)

(The key to a happy marriage is being absolutely ridiculous together as often as possible.)

The unsheathing of Topper made me think back. More than thirteen years…to when I planned my wedding.

First of all it must be said that getting married at nineteen years old certainly cut down on a lot of the perfectionism that I would have now. Which is totally a reason to get married young.

Also, I thank God daily that I got married in a pre-Pinterest world.

Okay maybe not daily. But I totally should.

Because back then? All we had were wedding magazines – and at most, three different publications. These are the very books from which all of my wedding ideas emerged. 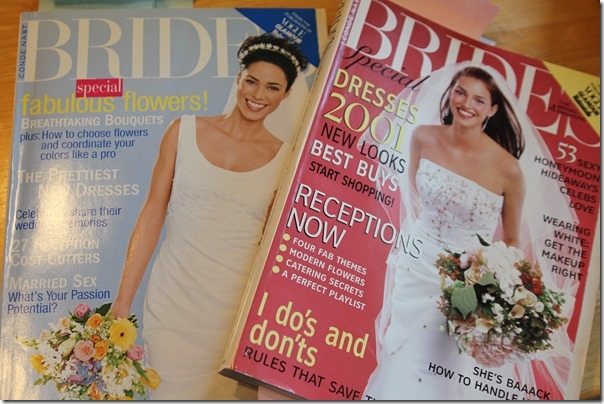 They were monstrous at the time, but my head would have exploded if someone had tried to explain what brides would have to sift through in the future.

One of these books contains my wedding dress, carefully tabbed with a 90’s pastel blue post-it note. 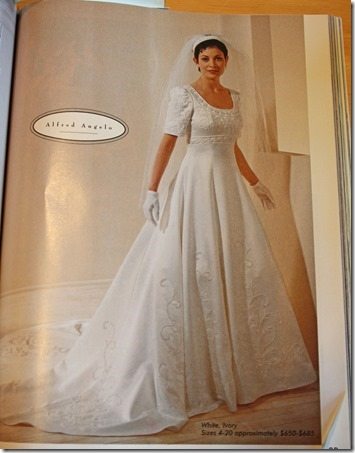 (I did not, however, wear those Mickey Mouse gloves with my dress.)

I literally picked my dress from that picture in that magazine – and then had to drive two hours to actually see it in person. I picked my cake design from a picture in another magazine, one that I unfortunately couldn’t locate in yesterday’s basement excavation.

Let’s talk about that cake.

My budget was tight, as was my timeline, so my choices were quite limited. Also, I wanted a cutting-edge cake design that had to be decorated in fondant, which was totally a fresh invention back then, thereby limiting my choices even more. I interviewed a couple of the more affordable cake bakers in town, and had settled on one fairly well-known baker.

We’d gone to her shop, tasted her cake, she assured me that she could make the modern, geometric, whimsical cake from my magazine clipping, and she gave me until Friday to let her know my answer.

I was pretty sure when we left the store that she was our cake baker, but I had one more tasting. I called back the next day from my Power-tel Flip Phone (it even had a screen to show the numbers you were dialing) to tell the Cake Mistress that yes indeed I would like to procure her services.

“I can’t do it. I gave your spot to someone else.”

“Wait. What? You said I had until Friday to let you know. It’s…Wednesday!”

“Someone else wanted it. I gave it to them. Good luck getting your cake.”

She was rude, did not apologize for her clear lack of integrity, and hung up on me.

I was at work when the tragic call happened. I hunted down my boss, burst into tears, and told her I needed to take the rest of the day off to handle wedding crises.

(Because that’s what engagement is, people. Endless Wedding Crises.)

I ran to my car, pulled out my travel Yellow Pages and began calling every other bakery in town. 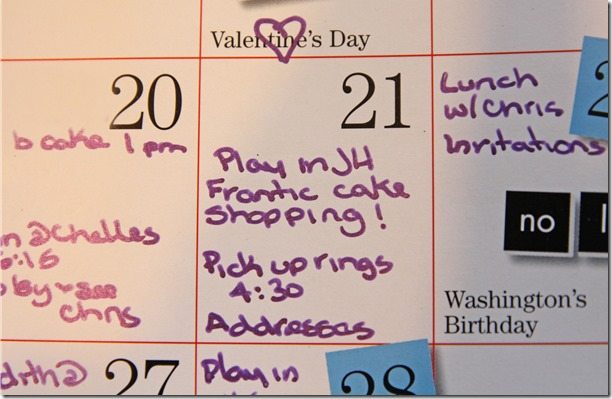 (In my basement digging, I also found the above 2001 calendar. I can’t believe I put off deciding on my cake until only 40 days before my wedding. Clearly I’m to blame for this catastrophic cake hunt.)

I found a baker that would take me, then drove over to discuss the details. They refused to use fondant, but assured me they could make my cake just as well with regular icing.

That evening, one of the original horrible baker’s employees called me after he left her shop.

In a furtive whisper, as if she had bugged his phone, he offered to make my cake for me on the sly.

“I heard what she did to you. I’m so sorry. She’s awful. It’ll take some maneuvering on my part to make sure she doesn’t find out what I’m doing, but I don’t want you to be without a cake.”

I told him that I appreciated him putting his life at risk for me, but had already made other cake arrangements, and they had assured me they could make the cake I wanted.

But they were wrong.

I hated both my wedding cakes – they were so sweet that the first bite gave me a headache (hence why Topper survived), and they looked nothing like my cherished magazine picture. The color was beyond muted – just last month as we were discussing Topper, Chris said, “Wait. Our wedding cake was green and white?? There’s no way there was any green. It was white!!” 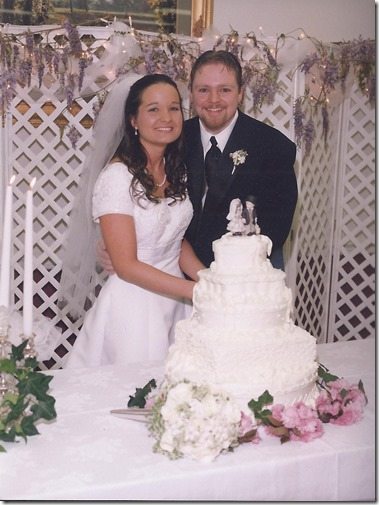 (And he was nearly right. But believe it or not, that cake is supposedly two-tone.)

The Groom’s Cake, although you could at least see the detailing and appreciate the off-center layer placement, skated the line dangerously between two shades of turd brown. 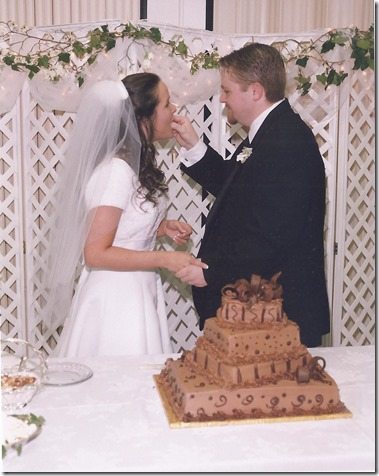 And I know that poo and chocolate both have claims on the color brown, but some shades are closer to one than the other.

But at least I had cakes.

Many years later, I was searching the internet for something on my iPhone as Chris drove down the road.

(SO much easier than that travel Yellow Pages.)

And I began that convulsive laughing that makes you choke on hiccups.

Because I ran across current-day internet reviews of the original baker – the one that did me wrong.

After I regained my composure, I shared over a dozen of them with Chris, in the form of a dramatic reading.

I used to love this bakery, but the last two cakes I bought from them were very dry. When I complained, you would have thought I committed a crime.

When the cakes were delivered it was terrible, the wedding cake had part of the icing separating and the grooms cake was not at all what I ordered, so I called X immediately because the delivery driver said you will have to call X. It took me over three weeks of going by the store calling and emailing before she finally responded and her response was as follows, and I hope you are sitting down. We can’t guarantee the delivery of our cakes as if it is too hot the cakes may melt and if it is too cold they may have problems. When I told her what all was wrong with the cakes she said well you ate it didn’t you. What was I supposed to do keep the cakes for 3 weeks before she finally called back.

X has hands-down got to be one of the worst businesses in the area. X herself is mean and ornery, and her staff is just as bad. They shout at each other across the store, things like “I have to go teetee!” Right in front of customers! If your order is wrong, and it often is, then they do not take responsibility for it. All of their cakes look like they were made in 1993. Unless you want a wedding cake that is distinctly redneck, stay away from this place and go to real bakery that is staffed with professionals!

If only I’d had full access to the internet’s glory back then.

22 thoughts on “The Origins of Topper.”