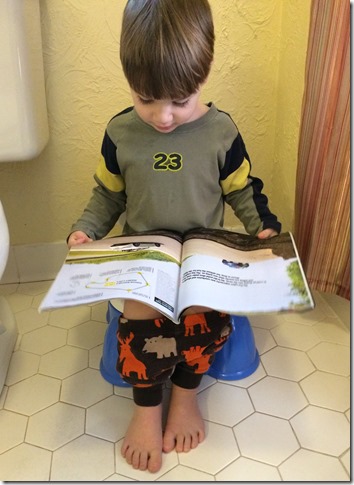 I have two problems with potty-training Noah.

Two. Last time we tried (in August,) Noah had a crippling fear of letting any output from his body fall into the toilet. Remember this picture? I know all his grandparents do. And they haven’t forgiven me yet. 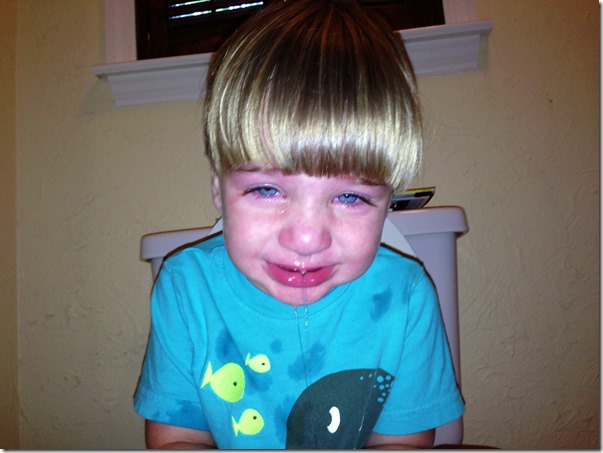 (He didn’t poop anywhere for 21 days after that photo. Trauma coupled with determination is a heinous tragedy.)

Three. Noah doesn’t understand when he pees. He has no concept of the fact that liquid is seeping out of his body and even better, that he can control it.

Four. Diapers are so much easier than living through potty-training.

But, the kid is three-and-two-months now. He must learn to crap like a normal human being or I will begin to look like a crappy mom.

So on Tuesday, I decided it was time to try again.

I was hesitant, so I tip-toed into the subject with Noah.

But I had him at Lightning Underwear.

Thank God Pampers doesn’t have a Cars line, because I’m pretty sure that having a McQueened-out butt is the only perk Noah would consider as valid for inserting his urine into a toilet.

We put the underwear on, talked about sitting on the potty, he reminded me that he didn’t know how to tee-tee, and we set off into our day, armed with Road & Track Magazines provided by my Dad, a Bumbo potty-training seat and stepstool, and a singing commode. 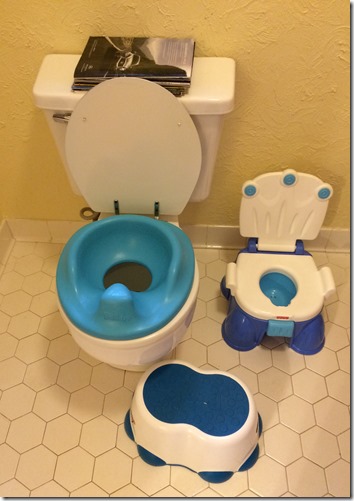 And, for the entire morning, he and I tromped off to the bathroom every fifteen minutes to try and conjure up some liquid gold.

The first time he peed on Lightning, I admit that I was excited for him – at least now he knows what it feels like to pee, right?

He didn’t like the feeling of having peed, but still showed no signs of knowing how to conjure the stuff.

And the novelty of trying didn’t take too long to wear off. Three pairs of underwear later, I could hear his eyes screaming at me, ”Gretchen, stop trying to make pee happen. It’s never going to happen!” 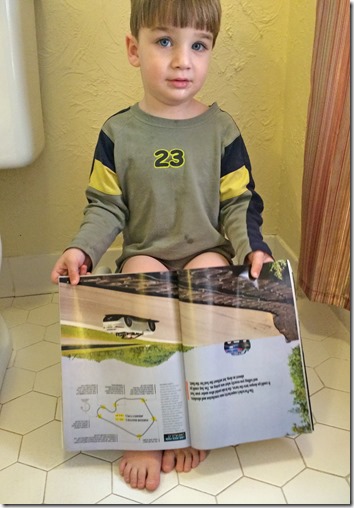 It was at that point that I requested of Twitter and Facebook to wear light yellow ribbons in solidarity with us for Noah’s Pee Awareness Week.

And Karen won reader of the year by actually doing it (and getting a picture before her toddler ripped it off, who presumably stands with Noah.)

If only Karen’s awareness of our plight had helped.

A few minutes later while Ali and I were doing school, Noah ran in and announced cheerily,

Finally, shortly before naptime which would bring a blessed reprieve back to lined underthings, Noah managed to squeeze out a couple of drops – enough to make his potty sing.

I mean seriously I’ve never seen a john so relieved to receive a deposit. The stupid thing wouldn’t quit singing. I actually suspected that the commode was so desperate for him to get up that it squeezed its own molecules tightly enough to rouse the minimum liquid required to create a musical reaction.

Despite the clearly accidental amount of whatever-it-was, we still celebrated heartily, Noah received the promised Dusty Crophopper that had been sitting in my closet for six months, and we moved on, hoping for a more notable output next time.

He happily welcomed his diaper back for naptime and the following cross-town trip to take Ali to art class.

While we were out, he looked up at me and said, “You put me in a diaper, right?”

He sighed and loudly passed gas. Because one can never be too careful with these things.

But alas. His excitement had departed when he had been happily enswathed in waterproof fibers. 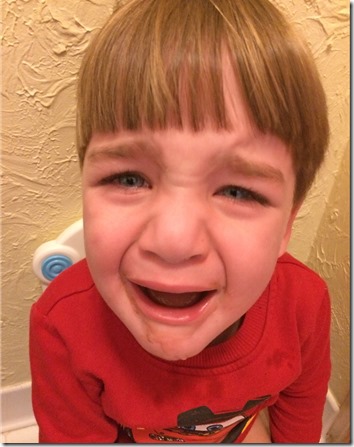 He had caught on to the concept of holding his pee – for a solid three hours, he clenched himself with all his sphincter’s might, whether on or off the toilet, desperately refusing to either soil his underwear or Let it Go where he should, no matter how many times I serenaded him with the Frozen hit. 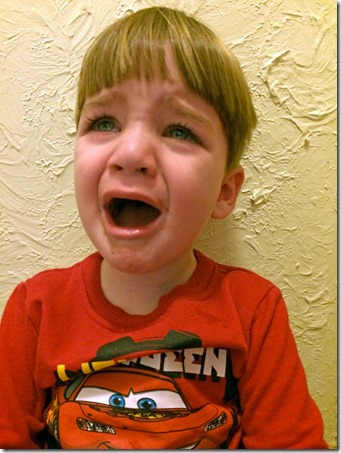 I realized a couple of hours into the day that he had a bright red circle on his butt compliments of the singing toilet, so we transferred our efforts to the luxurious Bumbo to rest his weary chaps.

It helped on the comfort front, but he continued his clinching.

We talked it through.

We prayed. But I’m pretty sure God responded with “I don’t do potty-training.”

I told Noah how much better he’d feel if he’d let go.

He told me his tee-tee was hurting.

I told him to just GO, for frick’s sake.

He said he was scared.

He violently shook his head and pushed me away.

We watched YouTube videos of other kids singing about the toilet.

We even watched YouTube videos of other moms reading potty books to other kids, because that’s the kind of meta life we live.

But we had no measurable or immeasurable results.

We spent at least an hour and a half between those two toilets without a drop to assign as victory.

And then, at 11:30 am, he left the bathroom and immediately filled his pants-leg with urine.

But then, at 11:59 am, I caught him admiring his underweared rear view in the mirror, which renewed my hope to live another day. 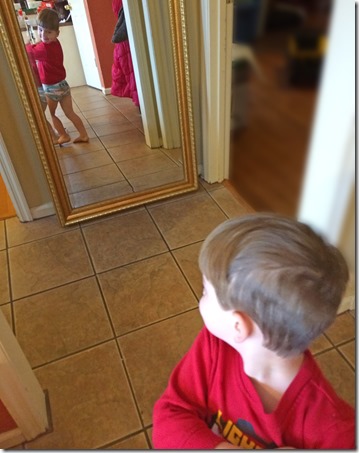 Because if anyone’s going to get us through this, it’s Lightning McQueen.

47 thoughts on “McQueen Will Get Us Through It.”