I get it. We’re not the only ones who have been cold this week.

(Minnesota readers? Are you still alive? How about Michigan? Canada? Illinois? Report in, everyone!)

But it’s been cold here. Cold enough to set records and let us experience single digit temperatures below zero windchills and other such absurdities that we’re not built to withstand.

Which turned The Deep South into a post-apocalyptic society of madness.

In the days of my youth, The South only went Y2K when we might have than a centimeter of snow or, horrors, enough ice to see under a microscope.

In Southern Freak-Out World Shutdowns, cold is the new snow.

We basically need to enact Martial Law to keep people from bankrupting themselves on Milk and Bread. It’s a tired joke and ridiculously used up cliché, yet people continue to buy it en masse. I’m pretty sure I saw every bread shelf in the state tweeted Sunday night, and they were all empty.

I won’t pretend to understand and I purposefully didn’t buy milk this week (even though my half gallon was two days away from expiration) for fear of being counted among the Sheeple. And also because I’m assuming they put tracking devices on bread and milk during weeks like these and then publish the names and addresses of stupid buyers so that the world may scoff.

So instead, I’ll have my cereal with questionable milk and eat my sandwiches without bread.

And anyway. If I WERE going to stock up for an actual snowstorm, milk and bread wouldn’t even be on the first page of my list. Because there are many items out there that are more vital to my ongoing survival.

I attempted to get the children out of the house on Monday to do errands. The beautiful part of motherhood is that you’re always learning something new about your precious little ones, and my lesson that day was that Noah’s legs do not function in below-freezing weather.

As in, he just stands there in shock until he begins to grow snotcicles rather than just walking FROM THE PARKING LOT TO THE STORE.

After experiencing this particularly frosty character trait for the first time, I attempted to pick him up and carry him into the grocery store – with very little luck. I had the kid padded like Ralphie, and he was so thick and slippery that it was like carrying a 40 pound satin pillow at the most cumbersome of angles.

So if that’s the kind of hardship that people were stocking up on milk and bread to avoid, then I get it, people. I get it.

But the most unfair part of our week was that despite the fact that we had below freezing temperatures for 60 hours straight, we had zero precipitation.

Okay not zero. We had a tease of a “Wintry Mix” Sunday night to jerk up our hopes and then dash them onto the hard, unfrosted ground.

So we had to find other ways to amuse ourselves.

Luckily for the children, I had seen some photos of frozen bubbles, and fully planned on using our ridiculous temperatures to try it out for ourselves.

I spend my entire year trying and failing rid our house of leaky, slimy bubble bottles, but of course I couldn’t find a single bottle when I actually wanted the stuff.

So I made my own out of dishwashing soap, and we set off (or rather sat in the front doorway shivering and wrapped in blankets) for adventure.

The bubbles didn’t work until we left our bubble solution outside for a while and gave our porch a couple cups of water to “pre-treat” it for catching bubbles.

But our victory was sweet. 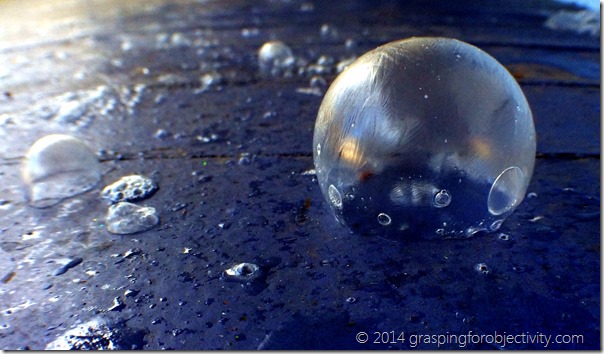 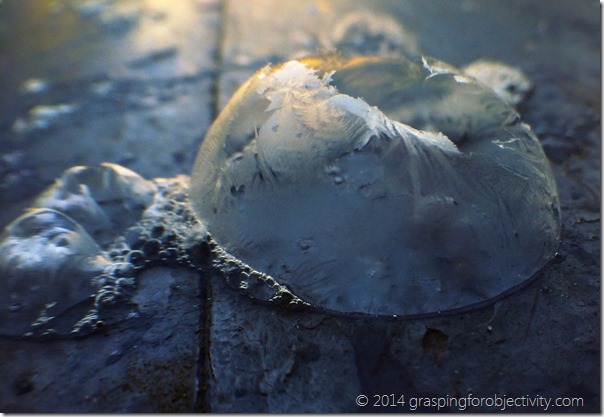 Some of our bubbles looked like abandoned igloos in a frozen tundra, 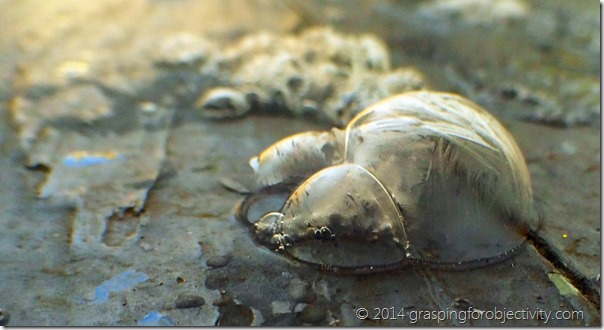 While others looked more like the Epcot center swallowed by a snow globe. 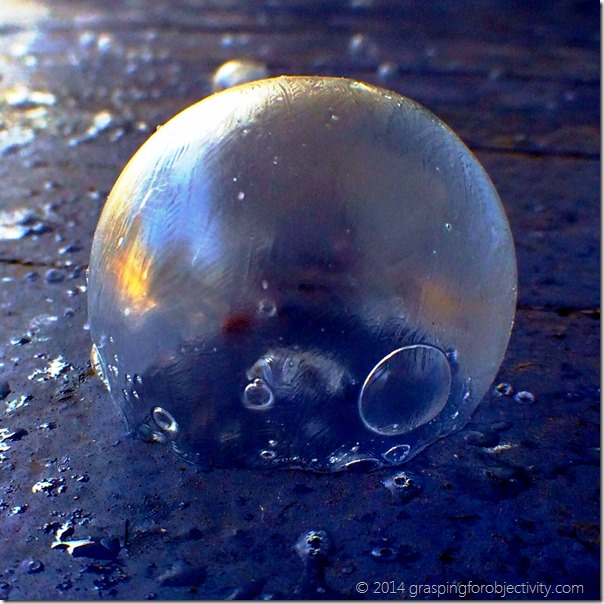 Ali enjoyed crunching them, fascinated with how unbelievably thin they actually were despite their bulky appearance. 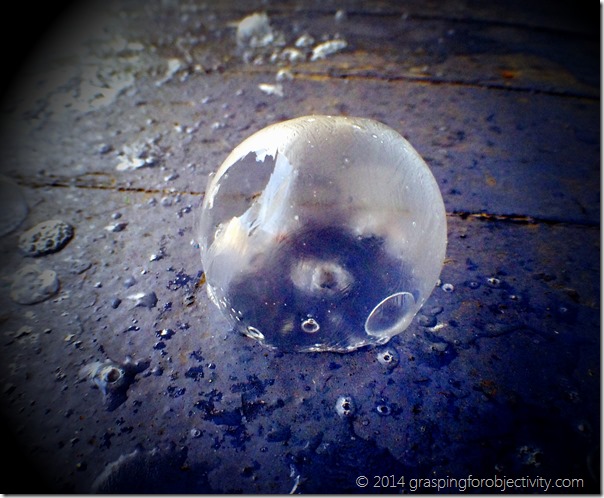 I’m not going to go as far as to say that our bubbles made up for the sad fact that we received no snow, but I will admit that they’re making me look forward to the next cold snap. 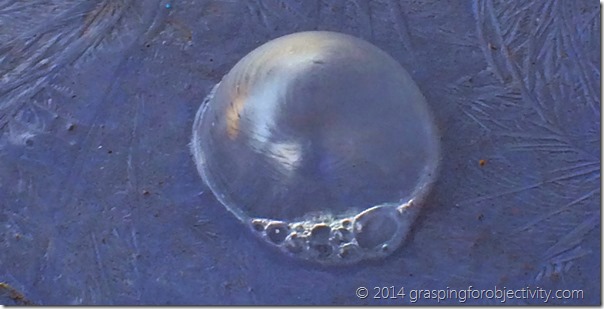 So. What did your family do to stay sane this week? And how cold did it get?

34 thoughts on “The Frozen South.”