So yesterday, we began. 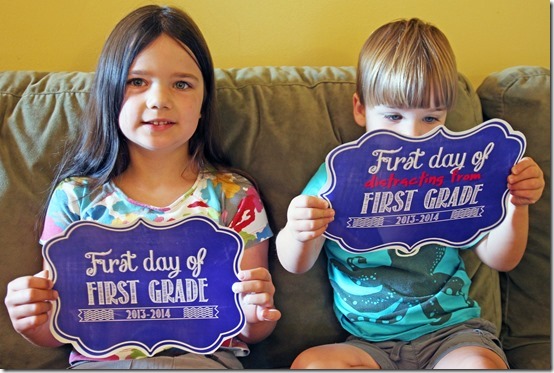 Noah was slightly perturbed about being labeled as a troublemaker on the first day, 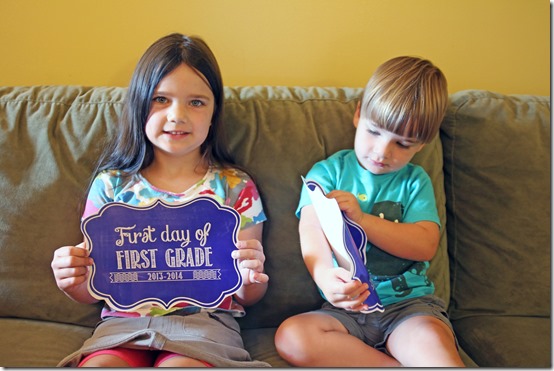 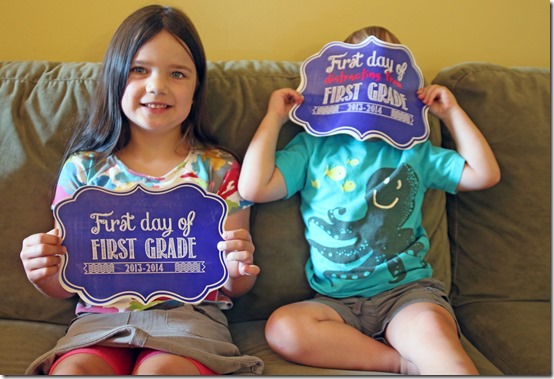 But he couldn’t deny that there was just cause for that assumption. 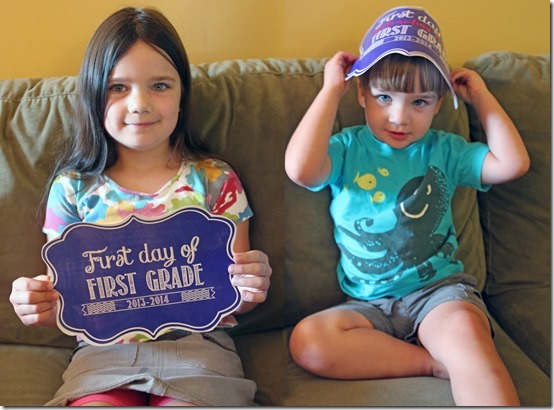 And no, I didn’t take a “first day of school” picture last year with which to compare these.

And yes, that fact does indeed eat away at my OCD brain like a hawk eating a rotting armadillo.

And yes, of course I have seen a hawk eating a rotting armadillo. Haven’t you?

But in order get this year’s pictures, I knew I would need some loot.

(Also, I wanted to try and make the day as fun as possible. But it was mainly a bribe.) 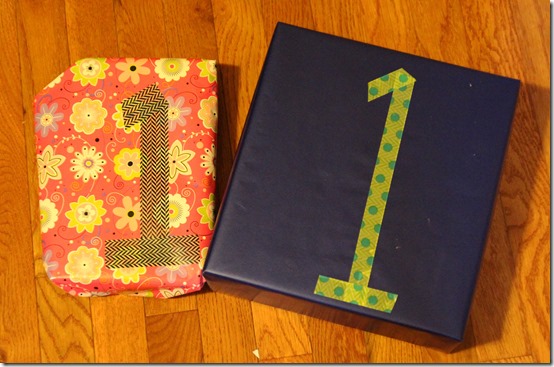 They tore into their presents, and Noah discovered that his bribe was a meta bribe – Legos to play with only during school hours. 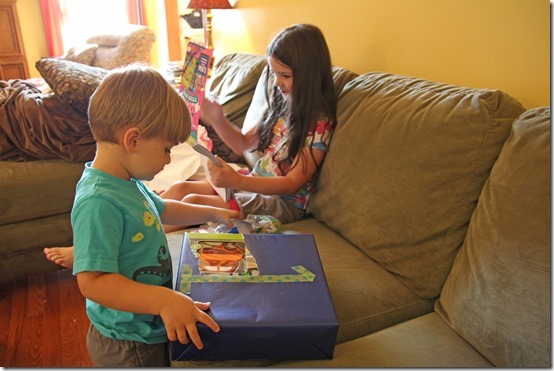 It was the best set of Lego Duplos I’ve ever come across – over forty pieces of car creation fun. It even had a poster inside that showed many variations, and Noah was intent on building each one of them. 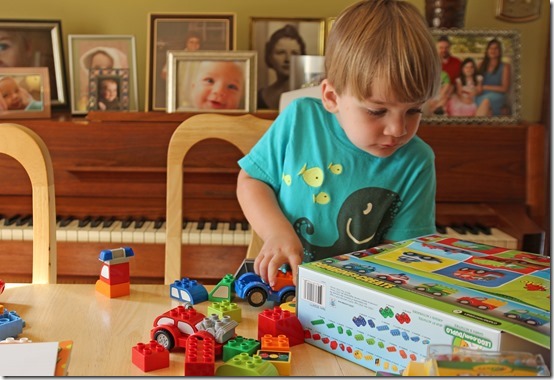 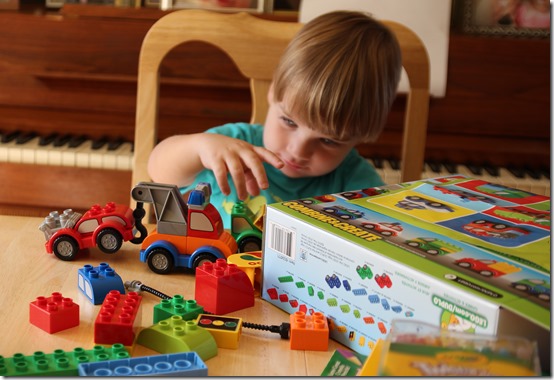 It might have been the most brilliant school purchase I will make this year.

In who-will-have-the-hardest-time-with-education terms, I had been most worried about Noah (he was quite angry by the halfway point of last school year), and secondarily worried about me (I hoped I had the energy I needed), and least worried about Ali. After all, she’s been begging me to start back all summer. The kid is an unabridged geek.

But in true Isn’t-It-Ironic form, I felt great, Noah was entertained and thrilled with his gift, and Ali was a complete crab.

DESPITE the fact that part of her school gift was a set of Tinkerbell Squinkies to help her with her work. 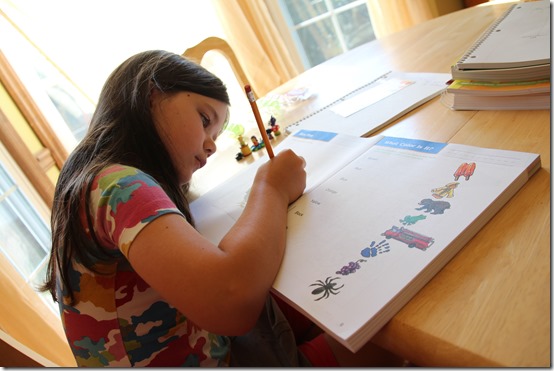 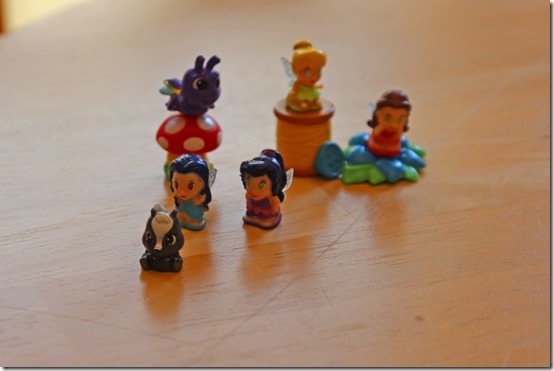 A few minutes into the morning, I realized that I had not set up this year’s rewards system, so I quickly grabbed a blank notebook and made the most non-Pinterestable school graphic ever. 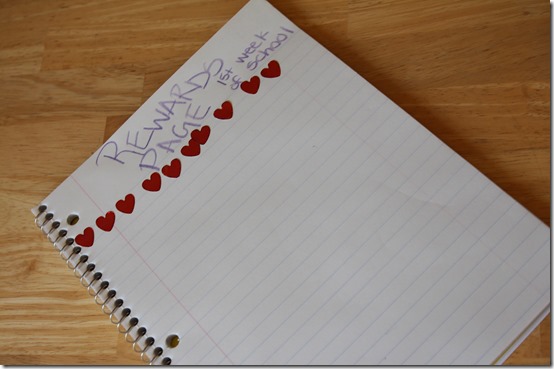 This helped cheer Ali’s mood a little, but Noah decided that she needed more positive reinforcement, so he waited until we left the room and showered her work with approval. 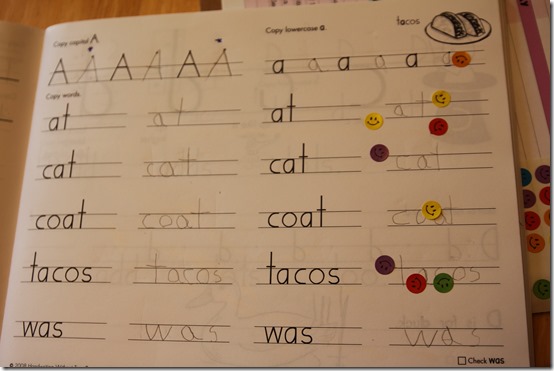 Who knew that he’d be my cheery student this year.

For those of you interested in the minutia of my plan, I proved myself to be totally hipster (in a homeschool-mom sort of way) and we’re doing the most vintage, out of vogue, used-to-be-mainstream-but-it’s-so-not-anymore choice:

Not Classical Education, not Literature-Based, not Montessori. I decided that Ali and I were both more suited to the traditional methods of learning – at least for now.

We’re using A Beka (I told you I went old school) for History, Science and Health, 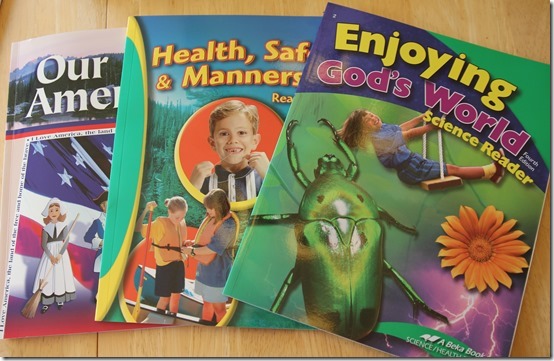 As well as Math. 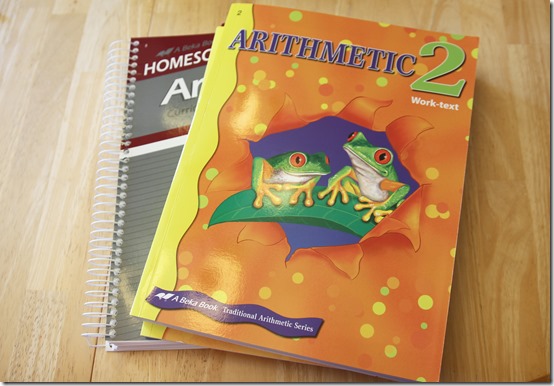 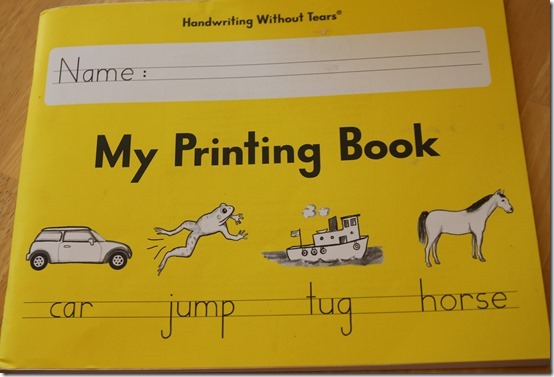 Bob Jones for Reading and Comprehension (with a lot of supplemental reading thrown in), 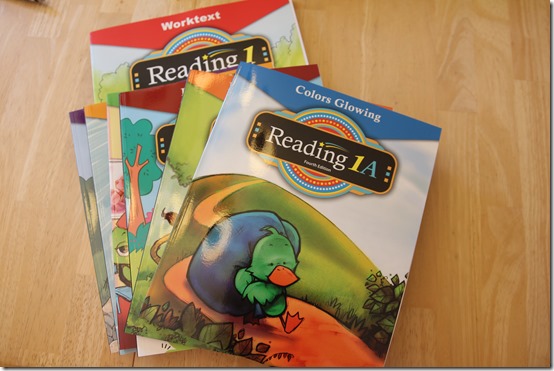 as well as for Bible, 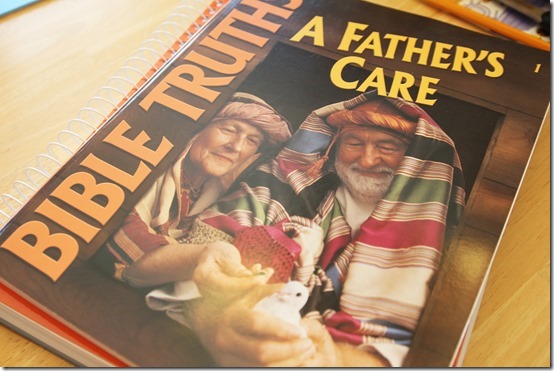 (Along with reviewing last year’s ABC Bible Verse Book that we loved,) 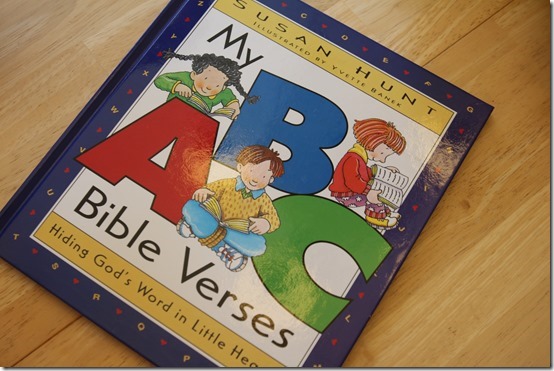 And Explode the Code for Phonics. 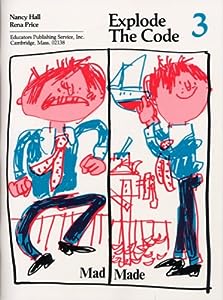 We’re still working our way through The Chronicles of Narnia for read-alouds, and will be doing various other books and activities for Spelling, Art, Geography, and such.

I’ll let you know how the hipster thing works out for us later in the year.

As we were finishing up school for the day, this happened. 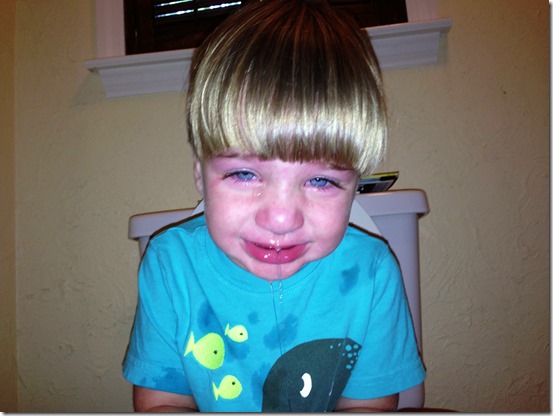 But first, the backstory:

Saturday: we’d made the mistake of offering Noah a prize for pooping in the potty, because he’d actually showed interest in sitting on the toilet (without screaming in fear) for the first time.

“If you poop in the potty, you can have Dusty Crophopper!!”

Noah’s obsessed with Disney Planes, so we pretty much figured this was like offering him a Palace on the Mediterranean.

(And with a name like Dusty Crophopper, he was destined to become a poop prize.)

Noah was thrilled with the offer. He had pushed with all his might and sincerely tried to deposit fecal matter into the proper place.

But nothing came out.

Then we made a GIGANTIC parental miscalculation of buying Dusty in advance – and then a COLOSSAL mistake by accidentally allowing Noah to see us buy it.

Which led to even more desperate tries, fifteen minutes of whimpering, and the saddest soliloquy of all time,

I couldn’t get…
the poop out of my bum…
so I could have…
Dusty.

This Saturday Distress led to a ruined naptime and did not lead to depositing any poop properly.

So, two days later when I heard grunts, I was thrilled for my son and rushed him to the toilet so that he could win his friend Dusty.

But something about the actual possibility of performing this action completely freaked him out, leading to much wailing and clinching of sphincters. 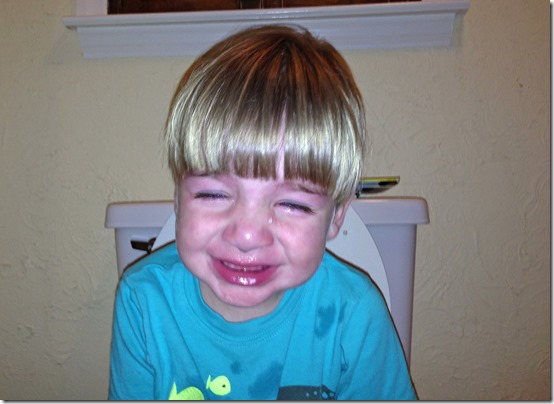 He didn’t even want Dusty.

It wasn’t worth it.

So I used FaceTime for what I am sure Steve Jobs had in mind and called Chris at work to help distract Noah long enough to let off on his chokehold. 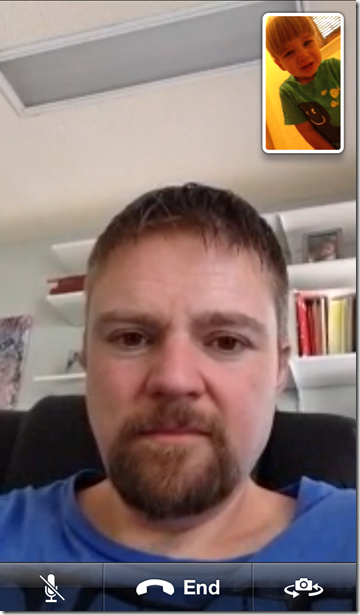 Chris used all of his Powers of Daddy Distraction to try and help. 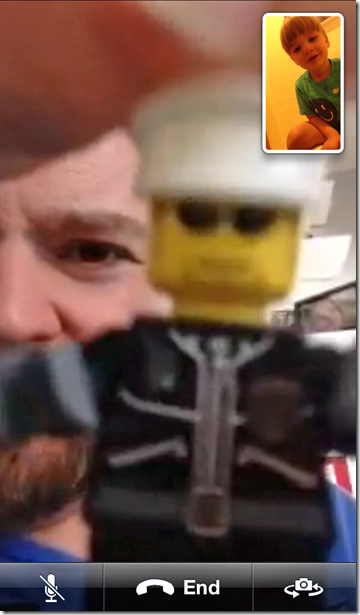 (Yes my husband has Legos at work. Doesn’t yours?)

But his efforts were futile.

And Noah proved himself to be a World-Class Clincher. 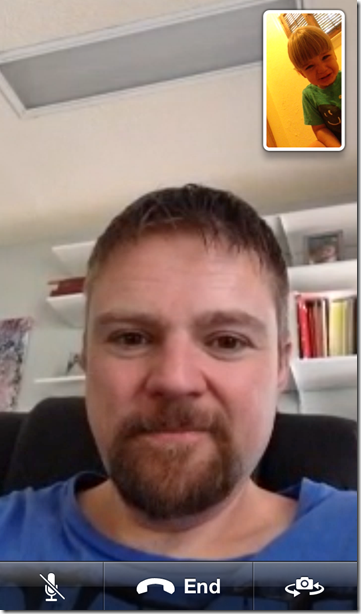 So I shelved the accidental potty-training foray quicker than the woman who says “I might have a natural birth – we’ll just see how it goes” asks for an epidural.

Because diapers are awesome, y’all.

And that was our first day of school. 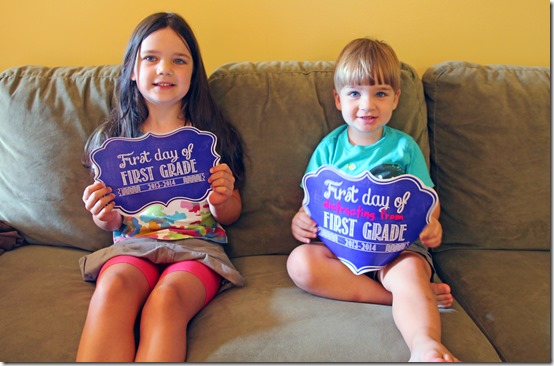 Editor’s Note: It turns out that Ali’s crabbiness was due to exhaustion after being awake in the middle of the night for an undisclosed period of time with achy knees. We’ve scheduled a knee removal for later this week.