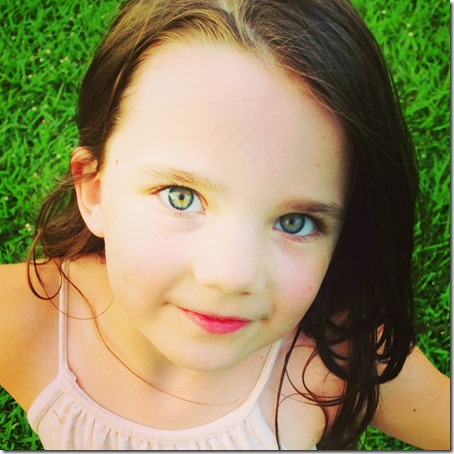 (Keeping up with six-year-old girlversation is hard, y’all.)

And, even though I said that it was time to retire her quote-keeping, there have been a couple of exchanges recently that have stuck around in the turnpikes of my brain.

Somewhere in the middle of a how-to manual on acclimating oneself to a hot tub, she stopped, stared at the dude across from us, and said,

“He has blue writing on his arm. Like the bad guys in Tangled.”

“I like it when guys have blue writing on their arms. It makes them look more like men.”

I peeked over at the arms of the girl snuggled up to that blue writing…  “You know, sometimes women have blue writing on their arms, too.”

Her curiosity of what happens after bedtime is, at times, a bit unnerving. Such as when she told Chris accusatorily,

“Sometimes I hear you and Mommy working after I go to bed.”

“Yes. Turn my noisemaker down tonight – I want to hear what you and Mommy DO after I go to bed.”

“Well then tell me why you stay up so late! What do you DO so late at night?”

I was on my knees picking up the giant masses of food that her brother had deposited under the table. Ali looked at me and asked,

“Why are you wiping those crumbs off the floor? There are ALWAYS crumbs there!”

“I think I want Daddy to baptize me. But not until I finish swimming lessons.”

(She’s nothing if not a contingency planner.)

On Wednesday, I dropped the kids off at my parents so that I could get caught up on things (like writing this post.) As I was leaving, Ali said,

“I love you so much that you’re my FOURTH FAVORITE PERSON!”

“Who are your third, second, and first favorite people?”

She looked at me like I was an idiot and said, “At work!”

Ali has rekindled her aspirations of becoming a Princess, once again striking her long time male interest Ethan off the list of marriage potential since he doesn’t have the pedigree to help her achieve her goals. But she’s starting to get impatient, not sure that she wants to wait for marriage to reach her dreams. Disney’s new girl-princess show, Sofia the First

, (starring Tim Gunn, might I add,) is not helping her level of patience.

“Hey Mom, I want to become a princess as a kid like Sofia became a Princess. So…I need you to make that happen.”

She got quiet and resumed eating her cereal.

“Okay. I think I’ll just stick to marrying a Prince so nobody has to die.”

So. What crazy stuff have your kids said lately?