We started using a babysitter in December 2011. Previously, we had just utilized the Grandparents, but Chris had been prodding me to find a babysitter I liked and get used to it so we could have more date nights and so that I would have options for the daytime.

So, with much trepidation, I agreed. My first pick was a blog reader, Giann. We had other family connections also, but my main connection with her was via this blog.

When Giann first started babysitting, I had a serious paranoia about how old she perceived me to be. I had just turned 30, so I had a bit of an Age Complex already.

I vividly remembered my teenage self, and also how old I perceived the Moms that I babysat for to be.

Which was pretty synonymous with ancient.

(Sorry, Moms-I-Babysat-For. I hate to say this in such a public setting. I’m positive that it wasn’t you, it was me.)

I asked her often.

Being the new babysitter, she was always quick to politely tell me that she thought I was very young and hip.

(Although she probably didn’t use the word hip because it’s most likely an ancient word that I’m only using because I’m Paleolithic myself.)

A year and a half went by and I got over it, reconciling to myself that I indeed am aging and there’s nothing I can do about it, but perhaps all is not lost quite yet.

Until last week, when we had a brand new babysitter fill in for Giann.

I knew her, but Chris had never met her. While we were out, he mentioned, “Can you imagine how old we must seem to her?”

My spiral of age-loathing reared it’s hideous head all over again.

Except for the fact that at that same moment, I was adjusting my Pandora station on my phone, which was playing music through the car via bluetooth.

“Do you KNOW how cool my seventeen-year-old self would think I am right now? In 1998, I thought that people who had those dinky credit-card-sized remote controls for their car stereos were cool. And here I just adjusted my radio, WITH. MY. PHONE.”

“Also? I asked our new babysitter if she wanted our Wi-Fi password before we left the house. The most technologically advanced information I ever got as a babysitter was how to work the microwave. Or maybe the cassette player.”

So I began to ponder. If we were to run into each other, what would my seventeen-year-old self think of me? 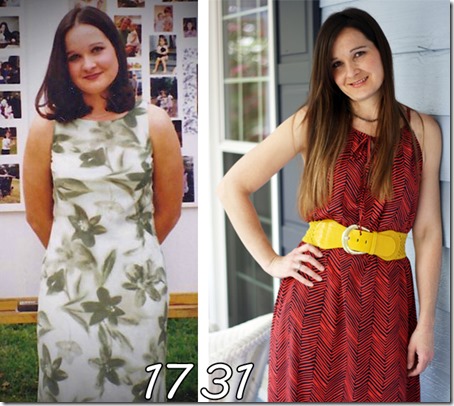 Seeing as how I feel that I am somewhat acquainted with her, here’s what I think:

1. She would be quite proud of herself for her precocious knowledge of the fact that she was going to marry that guy that played in the band with her. Because she did.

2. She would be slightly disappointed that I don’t still drive a stick shift. But then again, she’d never tried to cut up Chicken Nuggets while driving and feed them to a hungry toddler in the back seat, either.

4. She might be a bit peeved that I didn’t use a single name off of her “future children’s names” list. But Alexandria Victoria would be a stinkin’ long name for a girl to learn to spell. And she had no way of knowing that Alexia would sound like one of a million prescription drugs – after all, all we needed back then was Tylenol and Vicks Vaporub.

(But Alana is pretty close, so maybe a few cool points could be gained back.)

5. She might be a tinge disappointed in me for chickening out of going to college in Pennsylvania. But she’s to blame – after all, she knew I’d marry that guy back in point number one. And if that was going to happen, I needed to keep my college career close to home.

6. She would be shocked that I enjoy writing and actually do it every day without Mom holding The Proverbial Homeschool Gun to my head.

7. She would totally adore my kids. Because I do, and we’re like nearly the same person.

8. She would definitely be a bit ticked that all of her CDs are lost somewhere in the basement. Until I told her that they were all digitally stored on my car’s radio. She always did like fancy technology.

9. She might be a bit shocked that I threw away her pager (or “beeper”) sometime in the early 2000’s. And that I quit sending people message-by-numbers for them to decode. But once she saw what an iPhone can do…she’d get over it.

10. Ultimately, she probably would indeed think that I was a fossil. But a fossil with REALLY cool technology. And cute kids.

So. If you dare to consider…what would your seventeen-year-old self think of you?

31 thoughts on “On Impressing My Seventeen-Year-Old Self.”