I go back and read this post regularly just to remind myself – Never falter. Never fail. Never step foot into Chuck E. Cheese.

Chris and I made it four years, ten months, and three days into our parenting career without crossing his threshold. And we were well pleased with ourselves.

Then we received an invitation to a good friend’s son’s birthday party. A friend that Ali would be disappointed to miss his celebration.

We set out as a family to The Chuck. Our first clue of what was to come should have been the fact that there was nary a parking spot available.

I only managed to get one picture of the madness, and it doesn’t do it justice at all. But to give you a small taste of the ocean of people… 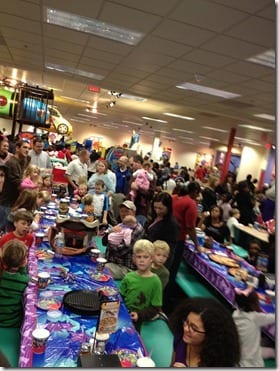 After several minutes of trying to schematically figure out how it was possible, Ali and I squeezed and pushed our way through the multitudes to find our party. We got some tokens and headed into the Corral of Crazy.

I am no germophobe, but the inch-thick layer of grease (that I’m sure could be grown out in a lab to reveal several new mutations of filth) on each and every arcade game about did me in. However, I held in there, began to get amused by the situation in which I found myself, and dove into the deep end of the germ pool.

A few days later after finally finding a parking spot and fighting his way through the front door, Chris and Noah found us. I barked out stringent orders to not let Noah come within eighteen inches any surface anywhere, and Ali and I went back to playing.

A few minutes in, I could see that the other guests were beginning to congregate in the birthday party area. I watched for Ali to pop up in a window, and when she did, I waved for her to come on down.

But Ali also has a severe issue with her personal space being invaded by strangers. So the crying turned to weeping, and the weeping turned to screaming.

All silent, of course – at least from my spot on the ground. I’m pretty sure it was reverberating nicely in the tunnels, though.

One of the other Mommies sent up her daughter, a year older than Ali, to retrieve her. Ali loves Abby – surely this would work.

More kids were crowding around, except this time they looked angry with the panicking, tunnel-barricading child. Ali reached for me, crying pitifully.

The way up to the tunnel were those half triangles that are purposely impossible for adults to snake through – I am pretty sure I had to bend my backbone in four different directions to weave up eight levels of germy plastic to make it to the tunnels above. I finally made it up, and was gaggingly horrified at the thick layer of dirt, mud, probably a little poop, and botulism that coated the floor of the tunnel.

As I was turning the corner, I heard a kid screaming obscenities. He was coming around the corner towards me, still screaming with his head looking back over his shoulder. AT MY DAUGHTER.

That kid was so lucky that there was a slide at his feet. He popped through it and disappeared, as I began to shake with lividity.

I reached my hand out to Ali and led her back around the corner to the stairs made for invertebrates. We made our way down together, her crying, me boiling with horror and anger.

Fortunately, children are infinitely more resilient than there parents. Because I can guarantee you that I was the one that left the most traumatized that night. 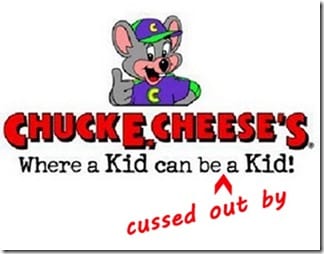 That trip did not only leave us emotionally traumatized. The health results were quite horrific as well, and can be found here.