Until we tear our house down to the slab and rebuild the whole thing.

It all began on November 5, 2012.  A fateful day when my ultra-responsible firstborn child flooded her upstairs bathroom (and spent the next week explaining how she followed all the rules and did nothing wrong.)

That happened ninety-one days ago.

In the past ninety-one days, we have:

1. Spent nine days under the watchful care and deafening sounds of multiple ServPro Blowers and Dehumidifiers. 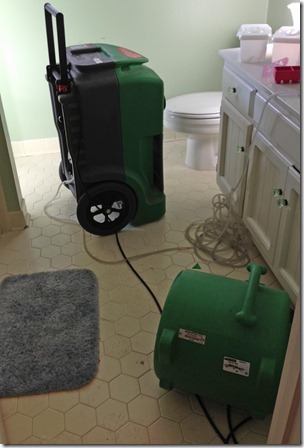 2. Had her bathroom completely ripped out. 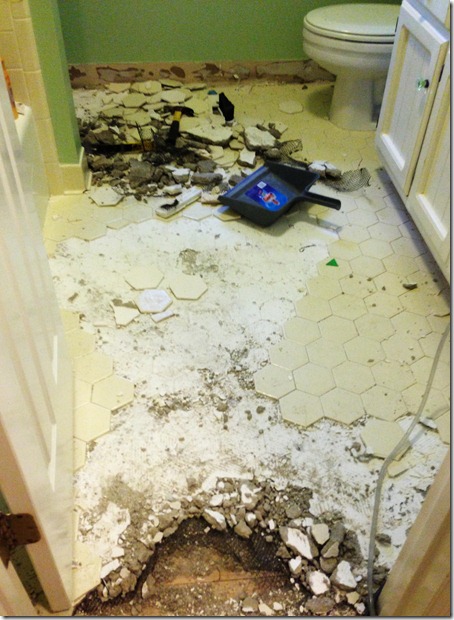 3. Had our carpet padding ripped right out from under the carpet in adjoining rooms.

4. Had a Decapitated Duck on our kitchen ceiling for ninety-one days and counting, making appearances at a dozen holiday get-togethers, two kid’s birthdays, and many other events. 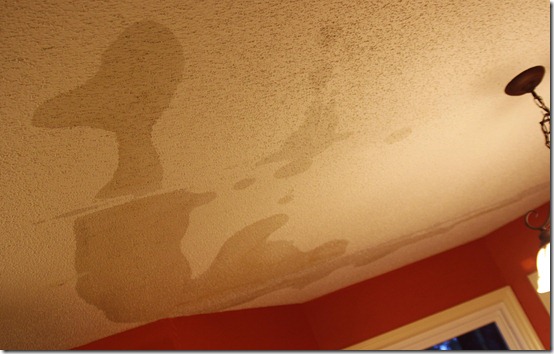 5.  Waited three weeks for the insurance adjuster to find time in his busy schedule to file his stinkin’ report.

6. Had more tile pulled out of our bathroom. 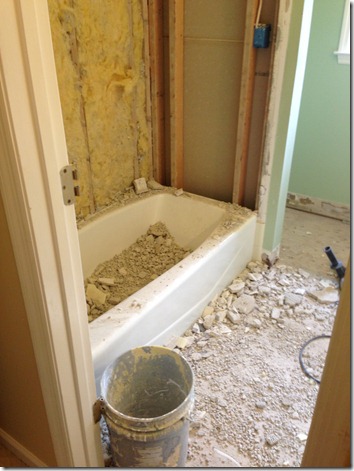 7. Quotes, quotes, and more quotes from contractors and tilers and such.

8. Had a bathtub hammered into oblivion (you haven’t heard cacophony until you’ve heard a cast-iron tub being demolished – Ali hid in my office closet that entire day.) 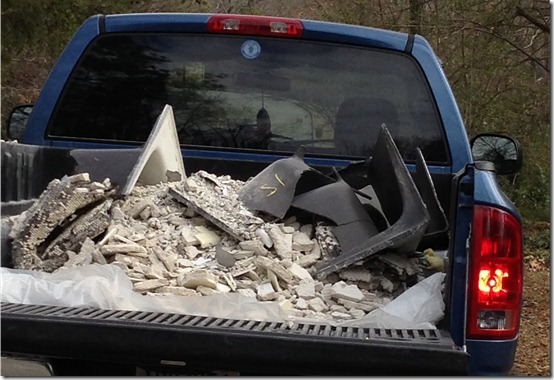 9. Had a new bathtub installed.

10. Had new tile installed, taking three entire days of trying to still do school and other life around workmen obliterating our house with tile installation and an impressive layer of dust. 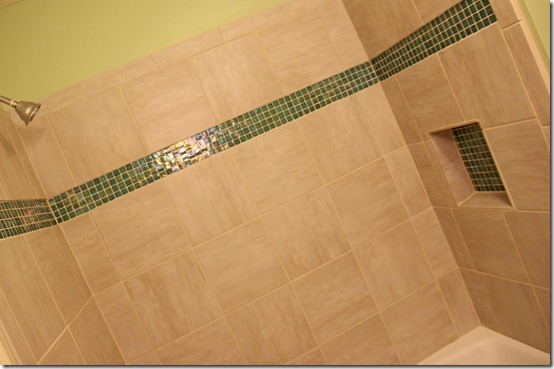 11.  During those three days, we were blessed to have a toilet sitting in our bedroom floor. 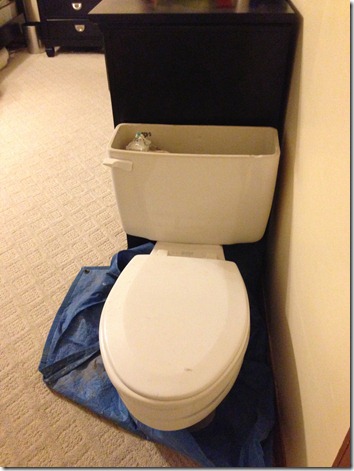 13. Had ServPro come back out to finally reinstall carpet padding, clean the eighty-six-day-old-dirty-carpet, and tack the carpet back down.

And it was there that it all went, once again, south.

Because the carpet was deemed completely unsalvageable.

At the very moment that we thought we were almost done (“only to paint over the decapitated duck left, dear!”), they broke our hearts and broke our spirits.

“The backing has come loose from the carpet.  There’s nothing we can do – it will just unravel.  You’re gonna need all new carpet!!!”

He told me that last sentence with glee in his voice, expecting me to kiss him on the cheek with gratitude, since my insurance company would be paying for new floor coverings.

Because all I want more than anything in the whole world is to end my career as a Demolition Project Manager.

I came back downstairs with a downcast look of consummate despair on my face.  Ali was drawing masks at the kitchen table, and looked up with alarm at my demeanor.

“What happened to it?”

“You flooded the house.  Remember?” 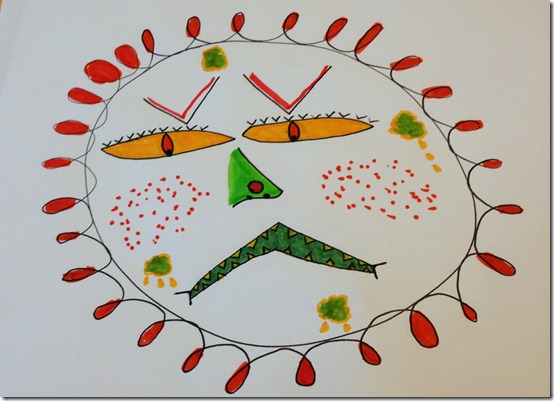 A few minutes later, I called Chris with the news.

He didn’t take it as well as I had.

“What??  One little bit of carpet is separated and they have to replace the whole thing?  Surely not!!”

“The guy said he’s been installing carpet his whole life and there’s no way to fix it.”

“Ali already had that idea.  And no.”

And then I found out exactly how desperate my husband was to be out from under the painful thumb of home repairs.

“I am NOT getting new carpet.  I can not live another month of the house being taken apart and destroyed!  They can put a foot of carpet in her room of a totally different color – purple – I don’t care.  We’ll call it an accent piece.”

“I don’t want new carpet either, but I don’t exactly want to destroy our home value just because we’re so over all of this.  We might as well do it right while State Farm is willing to pay for it.”

He insisted that I call our trusted friend George, the one who had helped us get such lovely replacement tile in the bathroom, to see how much trouble new carpet would be, to make sure that our insurance company wasn’t going to dump us, and in general to get reassured that all of his paralyzing fears weren’t going to come to fruition.

I did, and then I texted Chris many soothing bullet points, and he responded: 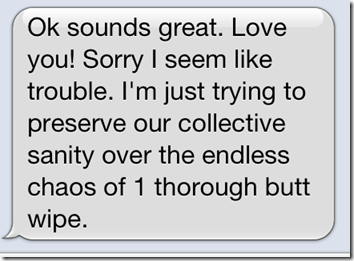 And I laughed.  Heartily.

I know I’ve said it before, but I’ll say it again.

Do NOT potty-train your kids.

35 thoughts on “One Thorough Butt Wipe.”