I like cooking, but I am also lazy. Consequently, we eat out far too often.

And, due to their overexposure to this practice, my kids are fairly well-behaved in restaurants.

Chris and I, being the overly sensitive people-pleasing type that we are, still have a long list of rigidly adhered-to rules about when and where we won’t dine with our children.

For instance, Friday and Saturday nights. We respect that these are date nights for many couples, so we either go early, or go somewhere that is clearly not a date destination.

Because we remember what it was like to be childless and romantic. And we remember how it feels to have our love-filled gaze broken by the inner-ear-vibrating shriek of a spaghetti-covered child in the booth next to ours.

(Or by the gag-choke-puke of the toddler at the next table over.)

Typically, I don’t have to worry about Our List when going to lunch with my friends, because we don’t usually dine in places where children would not be welcomed with open arms and sticky high chairs.

I was supposed to lunch with two of my friends, Jamie and Katherine. Katherine had a gift she wanted to give Ali (spoiler: it was a fabulous wooden cupcake set), so bringing the children was essential.

We discussed our options for dining via text. Katherine wanted a place with fantastic desserts. I threw a few recommendations out. She didn’t bite. Instead, she replied back, “What about [insert ridiculously posh restaurant here]? They have great desserts, don’t they?”

I froze, petrified and hopeful that Jamie would reply with “No, no. Their desserts are cardboard frozen over. And besides, I don’t have a Prada handbag.”

She texted something along the lines of how perfect and delightful that would be. 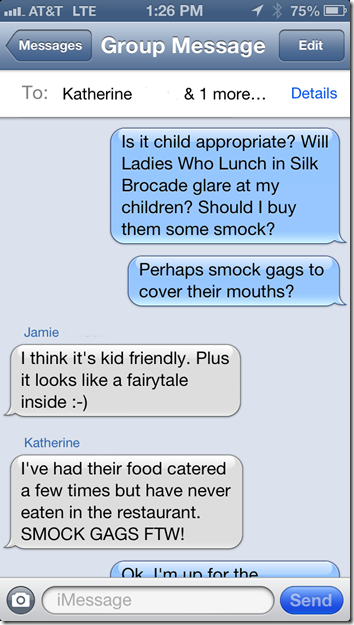 Despite my previous disgraces in the presence of Ladies Who Lunch, I trusted Jamie’s opinion, and took extra care to dress Ali and Noah in stain-free clothes. And even brush their hair.

I left the house, forgetting to first check and see where I was going. I looked up the address on my phone.

It was on the very same prestigious street that contained the illustrious salon at which I crushed my hand in an altogether humiliating fashion.

Petticoat Lane and I are not meant to be together.

I arrived a few minutes early, and knowing that I didn’t want to use up any Agreeable Child Credit while waiting on my friends, I sat in the car and observed.

I watched as a brand new Porsche drove up and took the front parking spot.

I watched as Ladies Who Lunch sauntered into the restaurant with their Cashmere Sweaters, Scarves knit from Yak Fur by Tibetan Princesses, and As Seen On Angelina Jolie Sunglasses.

And there were no children in any entourage.

I told Ali we were going to a Palace, so she would need to act like a Princess.

I picked all of the visible boogers out of Noah’s nose. And off of his sleeve. And out of his eyebrows.

I saw Jamie drive up, so I began unloading my children.

But by the time we journeyed to the door, she was nowhere in sight.

I took a deep breath and walked into the restaurant.

And everyone else in the restaurant also took a deep breath.

No, really. Every single person in the restaurant gasped and looked at me, The One who would dare walk into their Holy of Holies with one Undesirable standing by her side and one Undesirable in her arms.

My hope that other patrons would assume that my children were actually just tiny adults was clearly in vain.

The restaurant itself was just as beautiful as Jamie had described. It was as if we had been transported to a village in the French countryside. 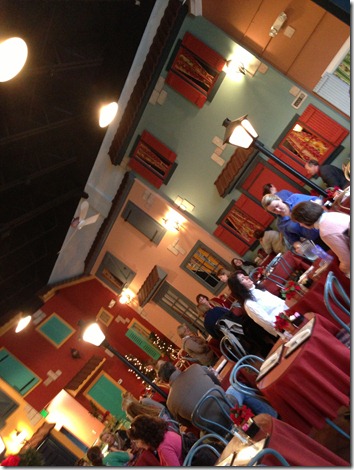 A village where all of the children had been sent away to boarding school. 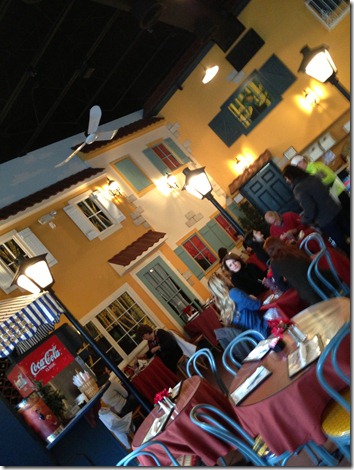 I sat down, and my friends shortly arrived. I attempted to read through the flowery descriptions of the dozens of salad options, but I was far too on edge for reading.

And Noah could smell my fear.

Five minutes in and he was already in grouch-mode.

I handed him Hot Wheels out of my purse.

He took note of the glass-top table and began banging them with an attentive amount of ferocity.

I took them away.

I gave him lemonade. He sipped some, then whipped the straw out of his cup, spraying Katherine with a zesty citrus shower.

She shrieked a tiny shriek.

He asked for a fork, loudly.

(With his precisely profane enunciation of the word “fork” in all it’s glory.)

I unrolled a set of silverware and gave it to him, just to get him to quit saying that word over and over, louder and louder.

He began banging it on the glass.

I took away his fork. He retorted.

I gave him my phone, with his favorite app pulled up – it always works.

Unless the aroma of fear is present, apparently.

For the first time ever, he flung my phone onto the floor, where it crashed and slid to the next table.

I retrieved my phone from beneath The Princess of Monaco’s feet.

Another kid came into the restaurant. I sighed with relief and desperately hoped that Other Kid would pitch an unholy fit, drowning out any and all of my own son’s utterances. But it was clear that the other kid had been properly drugged and gagged.

I tried to look at the menu for a moment and desperately searched for the kid’s menu to find what I could order to shut him up.

And he hates both.

He had eaten a gigantic breakfast, so I ordered him a schmancy Cranberry muffin, and gave him Ali’s sandwich’s fruit and chips accompaniment.

My two-year-old was served his muffin on a scalloped glass plate. 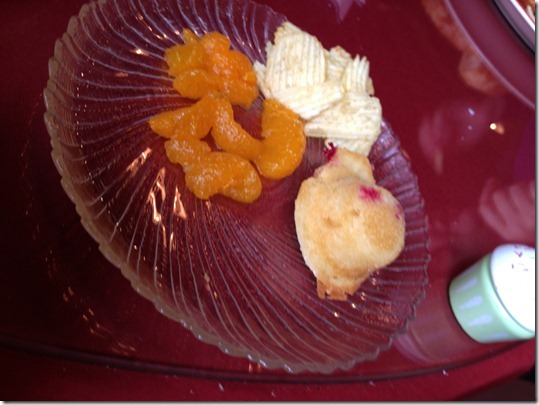 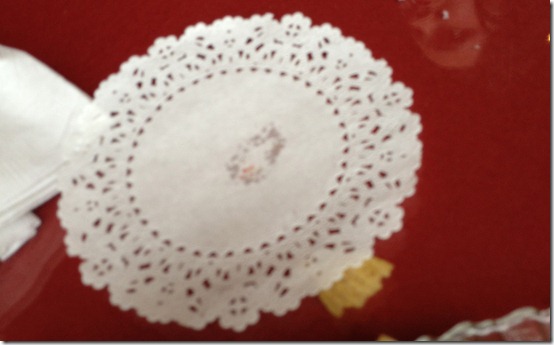 (Which I quickly removed before he used it to sling his food onto the lapel of a visiting dignitary.)

But the food worked. He shoved his face in a most impolite fashion for at least ninety seconds. Even the one other toddler in the restaurant turned around in his seat to gawk at Noah’s unpretentious eating style. 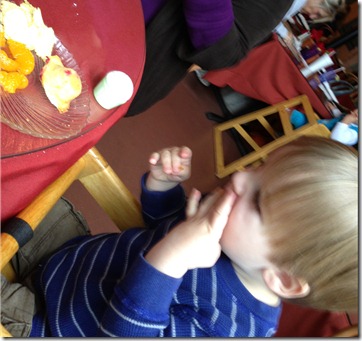 After his food was gone way too quickly, I ordered one of those fanciful desserts, thinking for sure that it would buy me a few more minutes.

But he refused it angrily.

And that was the last day of my sanity.

41 thoughts on “Toddlers Who Lunch.”