The last time we went to the Circus, Ali had just turned four, and Noah was a very impressive five weeks old.

For the last two years, Noah has been bitter about the fact that the only time we ever allowed him to experience such, his eyesight wasn’t developed enough to see the row in front of us, let alone the elephant’s tramp stamp(s). 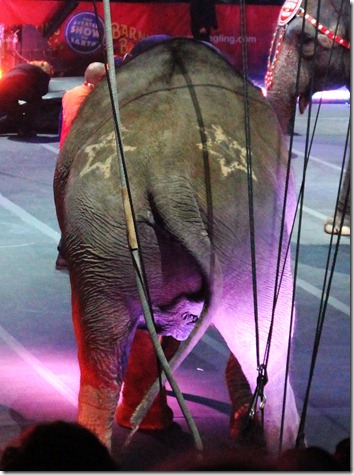 So we felt that it was time to go back.

This year, we were able to go in early, seeing the arena in an eerie, quiet, calm-before-the-story kind of way. 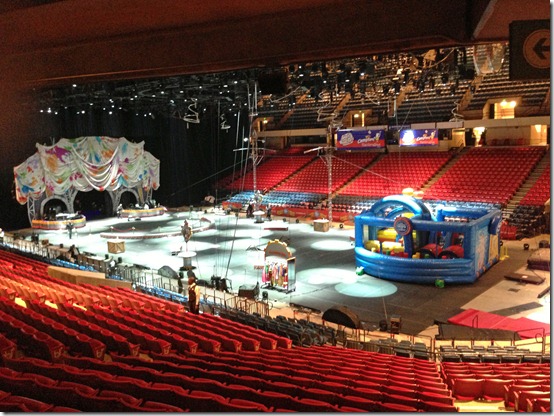 It was pretty thrilling.

They also had a Ringmaster wardrobe available.  Ali had not had her customary thirty minutes of warm-up time to de-shy herself, so she wouldn’t try any on, despite the fact that they were colors that had previously only existed in her dreams.

Her Father, however, was not so shy.  He enjoyed playing the part of Evil Emperor. 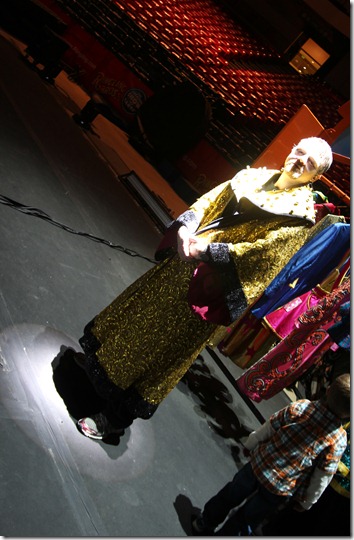 I decided to join in the fun, hoping that possibly it would tempt Ali to get over herself.  I begged.  I pleaded.  I bribed. 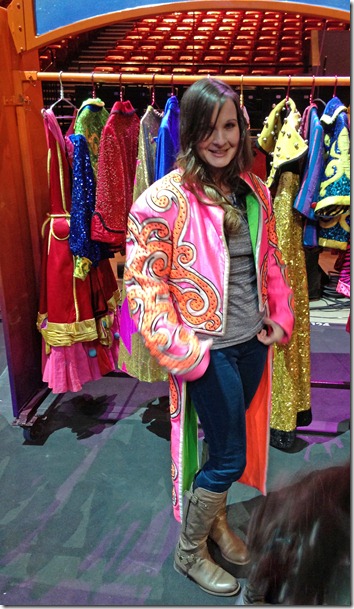 But she’s a hard sell.  This was as close as she’d get to the beautiful furry fabulousness that she could have experienced. 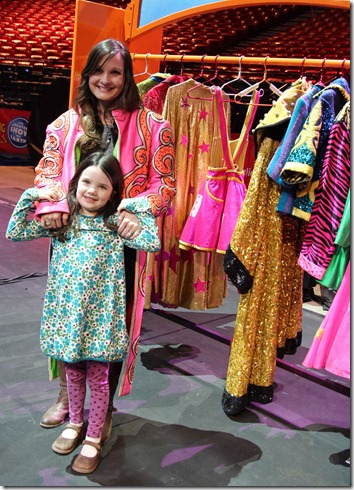 (For the record, I distinctly remember being just like her as a kid.  So chances are, one day she will find that the safest way express herself will be at the safety of  the keyboard.)

Chris and I got to meet our favorite hometown celebrity, The Best Meteorologist in The World, James Spann. 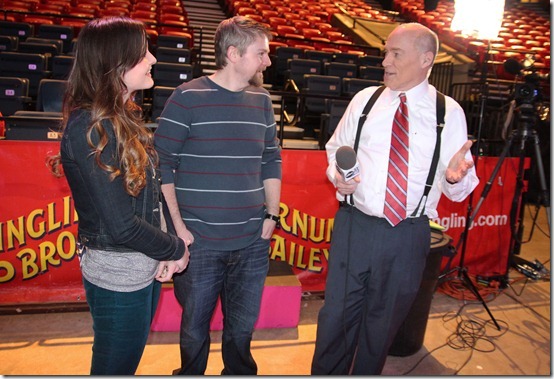 After that, nothing else could be as exciting for Chris.

…except for maybe walking on the tightrope.  With help. 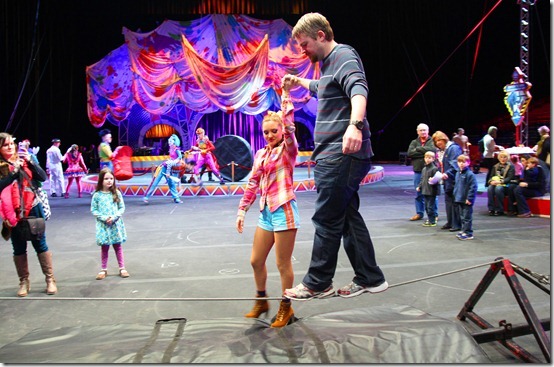 Ali relaxed quite a bit when we found our seats, where we could watch the clowns from afar and buy Cotton Candy that came with it’s own hat.

Noah, however, had issues with both the hat, 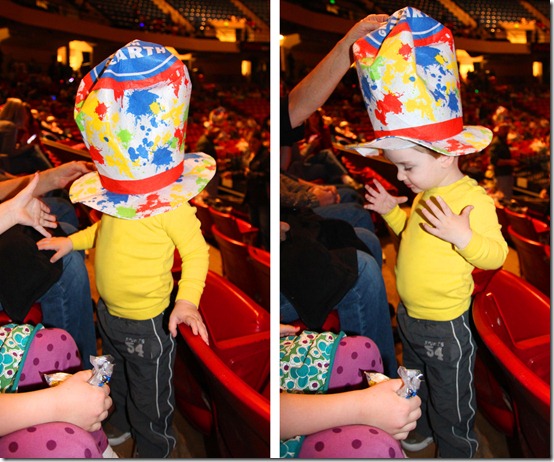 and the cotton candy. 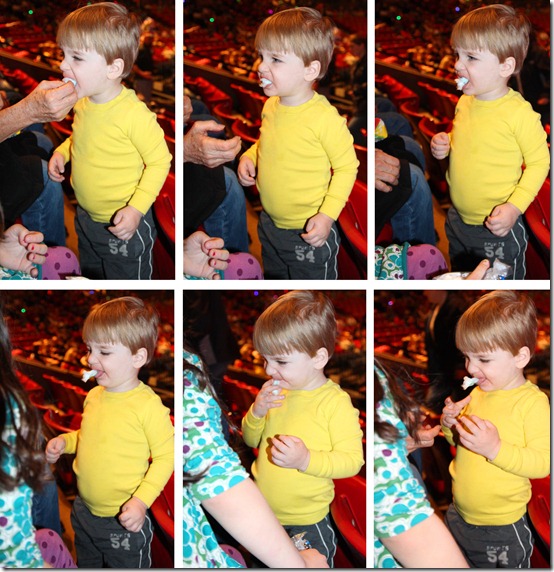 But once the show started, he was hypnotized, 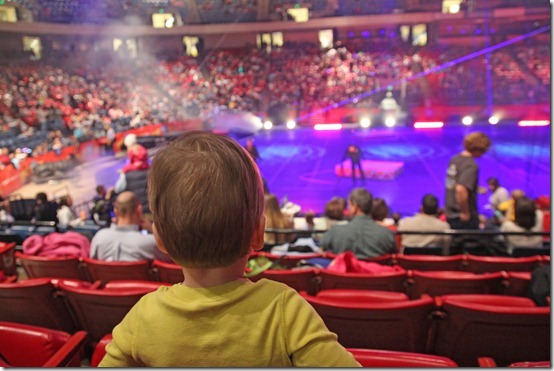 (After all, Traffic Cone Stilt-Walkers look a lot like they belong in the Cozy Cone Motels from his favorite movie,) 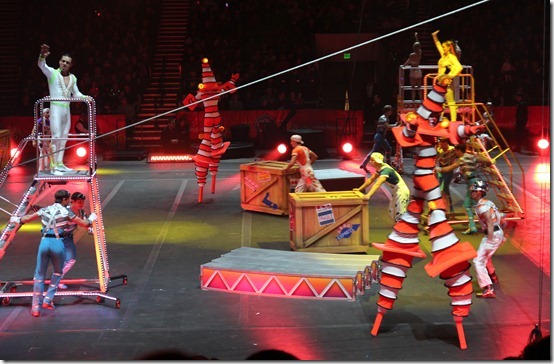 And Ali had her last moment of silence for the entire show. 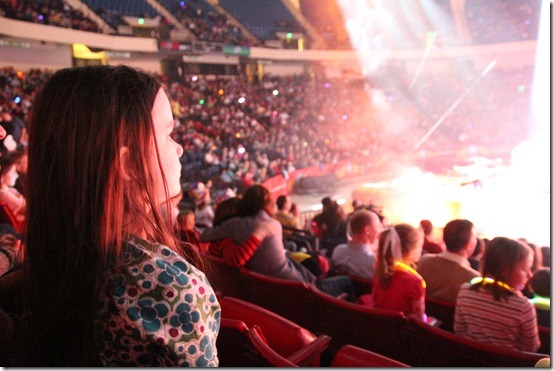 After that, she made herself hoarse pointing and screaming “LOOOOOOK!” in my Mom’s ear at least once every other second. 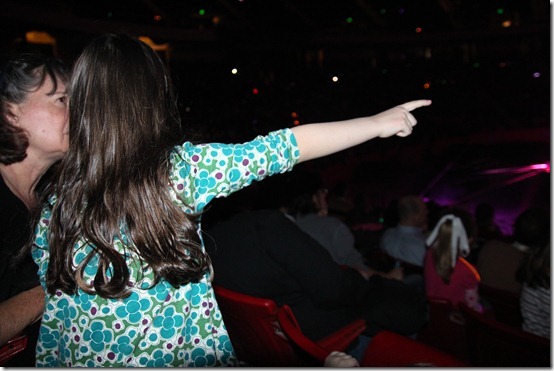 She was especially amazed at the guy and girl walking upside down. 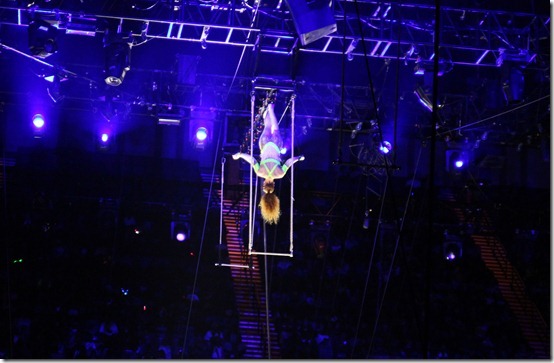 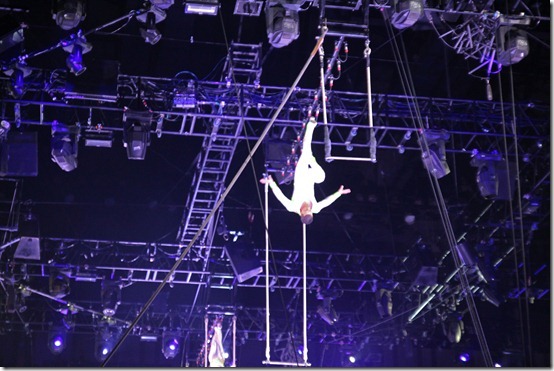 But she had her first ever Circus-Anxiety-Attack on behalf of the girl on the chair on the pole between two bicyclers on the tightrope. 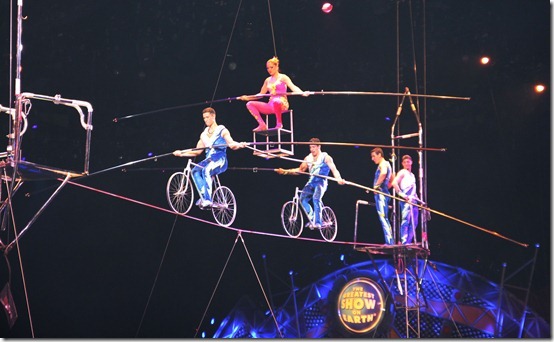 The whole arena was silent out of respect for her concentration.

Except for Ali.  Who involuntarily screamed in terror.  Quite loudly.

I’m pretty sure one of the bicyclists jerked just a bit before I clamped down on her mouth.

Noah did well for the first half, but due to a short and early nap, he was exhausted, and kept trying to lay down across all of us.  Luckily for him, we had come in two vehicles, prepared for that contingency.

Ali, however, was at the perfect age to stay up late, stay focused, and love every moment of screaming “LOOOOOK!” at every. single. act. 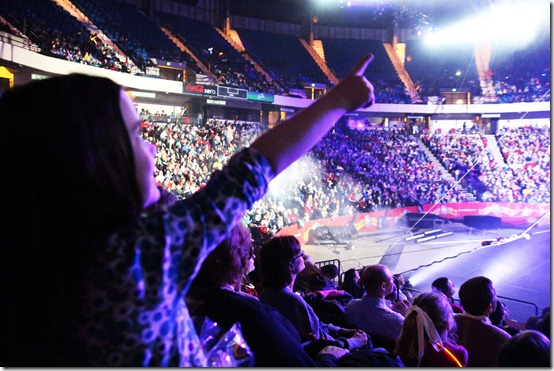 The trampolinists convinced her that she wanted to take up Gymnastics again, 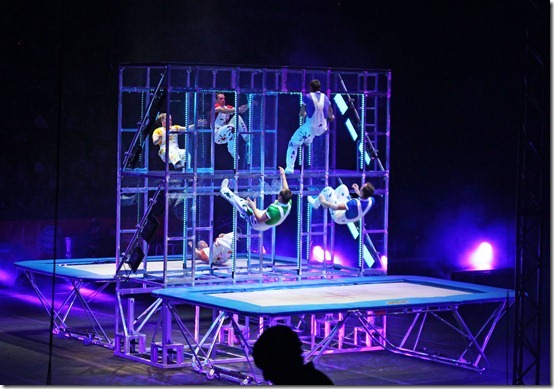 And the dog act made her desire a dozen alternately-colored canines. 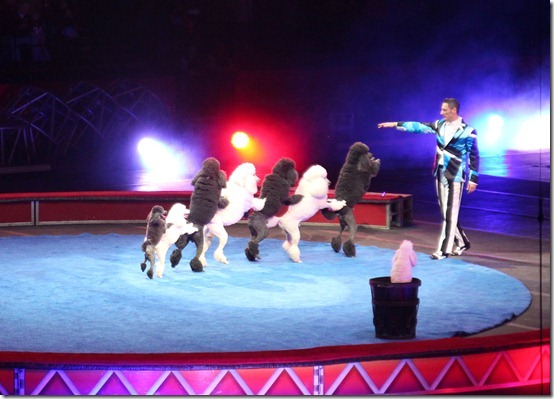 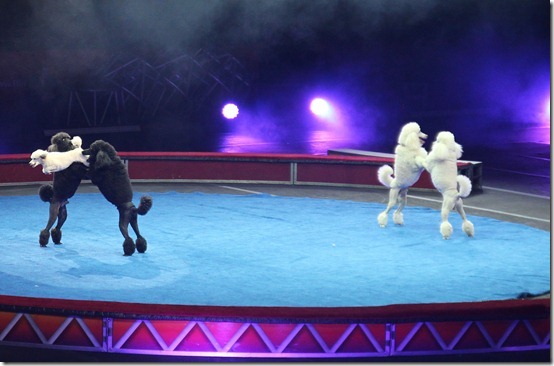 I, too, was taken in by the dreams of the Circus.

The elephants dancing to Gangnam Style made me once again wish that we had a real football mascot for Alabama halftime shows, 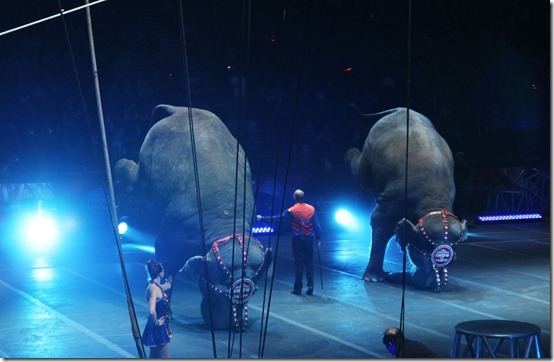 And my favorite act totally reminded me of my intense need build a giant duel hamster ring in my backyard. 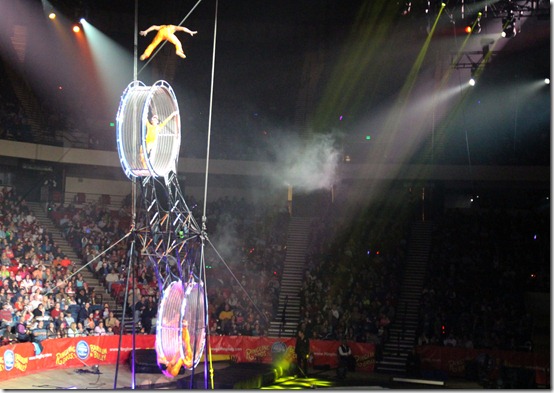 In summary, Noah’s Circus Bitterness no longer has justifiable cause, Ali’s career goals are now more focused, I will become a lobbyist for a University of Alabama Elephant, and Chris got to meet James Spann.

What more could you want?

Disclosure: We were given Circus Tickets, but were planning on attending anyway.  I was not asked to blog about it – we just enjoyed ourselves.  Also, I gave away two four-packs of tickets for others on my Facebook Page – follow me there for completely random thoughts and so that you don’t miss out on future opportunities for fun free stuff.

20 thoughts on “Circus Dreams and Ambitions.”