With the onslaught of illnesses in our home over the past month, I have found myself reminiscing of the Golden Days of Malady.

As a child, I highly enjoyed the benefits of being sick or injured.

As such, the crowning achievement of my childhood was breaking my arm in the seventh grade.

Ailments are fun when you’re a kid.  You get attention…you get to go to the doctor (yes I loved it, but no I wouldn’t admit it)…you get Sprite to ail a sore throat…you get to skip doing schoolwork and chores.

But I never wanted to let on to my appreciation of this facet of life – after all, I had a hunch that my special treatment would vanish completely if my Mom knew how much I loved it – right?

So I would start out by exaggerating my illness.  Then upon my Mother’s announcement that she supposed we should go to the doctor, I would cover my tracks by panicking and begging her not to take me, when in fact I was pleased as punch.

(Dear Mom: I’m so sorry if this is the first time you’re hearing about my double life.  But you’re a smart lady.  I have a feeling you were very much aware of my attempts at defrauding the system.)

With the advent of my own role of motherhood, the pleasures of undergoing illness became slightly…well, let’s just say it: they vanished quicker than a bottle of snowcone syrup in an Eskimo village.

Because toddlers don’t quit rooting simultaneously through the garbage and fridge just because you’re too sick to get off the couch and stop them.

And young children don’t ask less than their quota of 437 questions a day just because you have no voice with which to answer – they just put each question on repeat until you choke out a response.

But yet, the old subconscious feelings of anticipation over prospective illness still remain, which is, I suspect, why I hold the World Record in the category of “Talking Oneself Into a Fever.”

But I just drank something cold.

And my baseline temperature is always low.

And this thermometer always shows a full degree lower than the other one.  Where is that other one?? Oh yeah it’s lost.

And I might not have squeezed it tight enough under my tongue.

I’m going to have brain damage if I don’t do something quick to get this raging fever down!!!

So it should come as no surprise that my daughter also has a great desire for illness.

A desire which is only intensified when her mother and brother are sick, but she’s been passed over by the Ailment Fairy.

(Because it looks like we’re having so much fun and all.)

Noah stayed home from Church with a cough the Sunday before last.  Being the doting caretaking mother that I am, I inherited his cough the next day.  Which also happened to be the day that Ali began hurting all over (right after having jumped hysterically on my bed…suspicious.)

So I suggested she take a nap instead of quiet time – after all, it’s the only thing that helps one feel better – more sleep.

At first she balked, but due to the fear of losing her credibility, she agreed.

(This must have been a crucial fake illness.)

On Tuesday, she just didn’t think she could do ANY more school because her tummy hurt so much and she just knew she had a fever even though I couldn’t feel it.

And this time, she went ahead and preempted.

“I think I need to nap today.  Because I just feel THAT BAD.”

(Despite the overwhelming evidence to the contrary.)

But she could tell that I was on to her, so she had to up her game.

On Wednesday during quiet time, she managed to dye her hands with some unknown red substance, and then in a frenzy, called down on her monitor,

“Mommy!! I felt so hot that I put my hands on my forehead to see if I had a fever, and it was so so so hot that it turned my hands bright red!!”

Those hands maintained their glowing shade of red for at least 12 hours, despite many washing attempts.

(And I have yet to discover her stash of red #5)

Thursday.  Cabin Fever from the sick family members set in, so she spent the entire morning repeatedly asking, “Are we going to go anywhere fun today??”

“But you asked me all morning if we could go somewhere fun!”

After days of straining and hoping, God finally shone down on her and rewarded her with a cough on Friday morning.

And never a happier child you did see…coughing up her lungs. 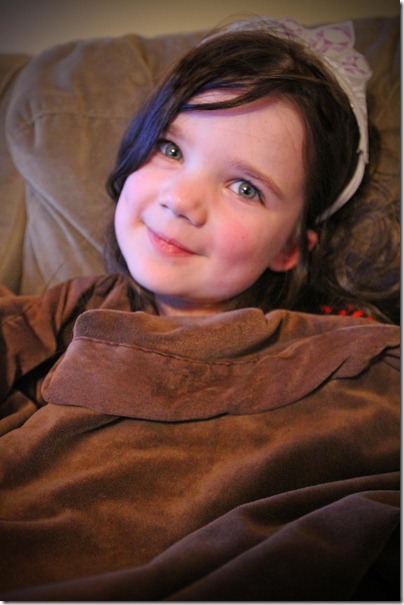 …Too bad for her it only lasted twelve hours.

…And that her mother was so much sicker that she couldn’t give her the attention her poor cough deserved.

But I wouldn’t be surprised if her next effort will involve a thermometer and a microwave.

9 thoughts on “On The Pursuit of Illness.”