You might have noticed that my husband has a bit of obsession with Christmas.

…Which would explain why he was willing to dress as a donkey to get me in a Pregnant Mary outfit two years ago.

So as my husband encourages me ever quickly down the slippery slope of becoming a Holiday Liberalist, we found ourselves, yet again, in a Christmas scene for Halloween. 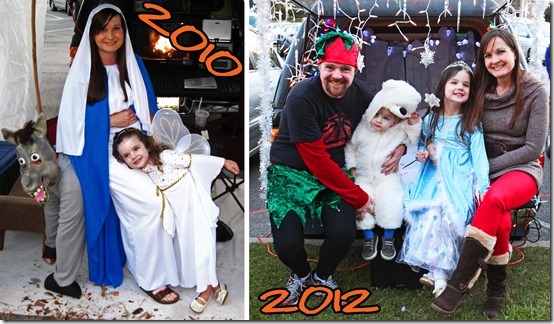 …except that Chris got a promotion – from sweaty donkey to ridiculous elf (in a pair of boxers that he so fortunately won four years ago.)

…and Noah got a demotion – from the unborn Son of God to Token Polar Bear in Random North Pole Scene (RNPS).

…but he did add a bit of interest to his costume, as he preferred the Abby and Brittany look. 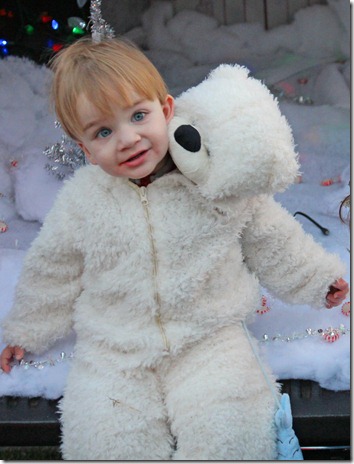 Although Noah ran from every photo opportunity, 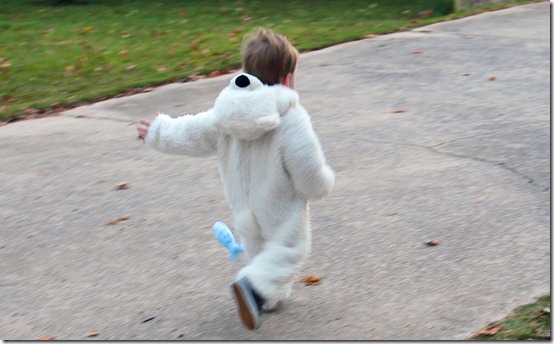 and only allowed me side shots of him in full costume as he desperately declothed his head, 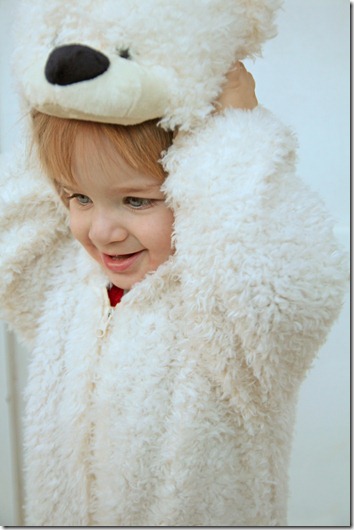 Ali stayed true to her Princess ways and allowed a full photoshoot, requesting that I be sure and place them on my blog, not Facebook and Twitter, so that more people would be able to see them. 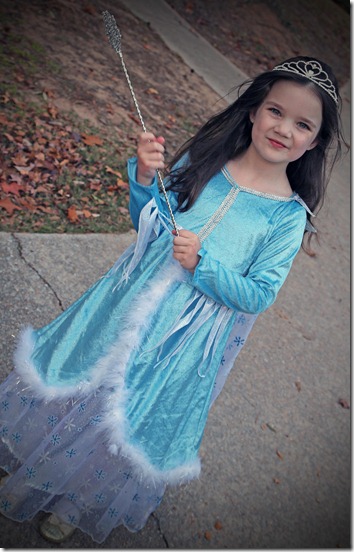 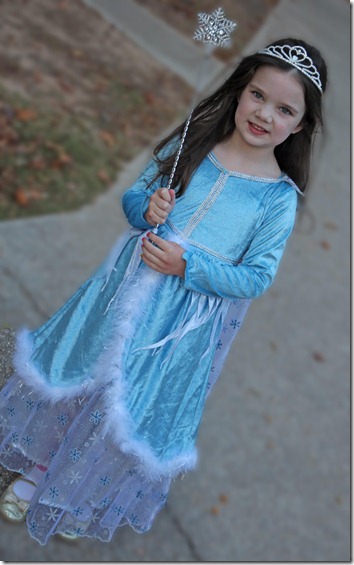 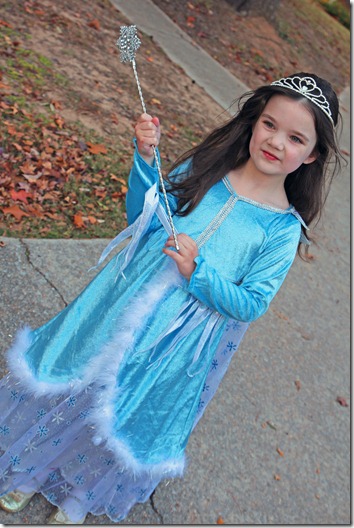 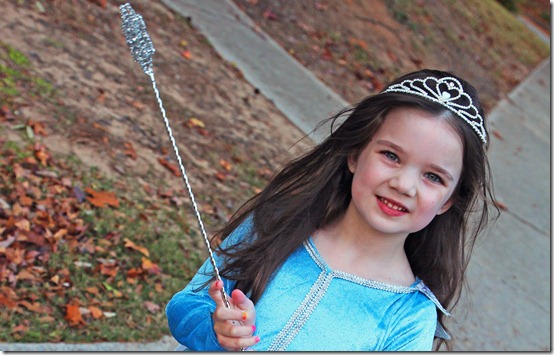 But while I was busy photographing the children, Chris was already at Church constructing his beloved RNPS.

Upon arrival, the kids were…well, they were more impressed than they looked. 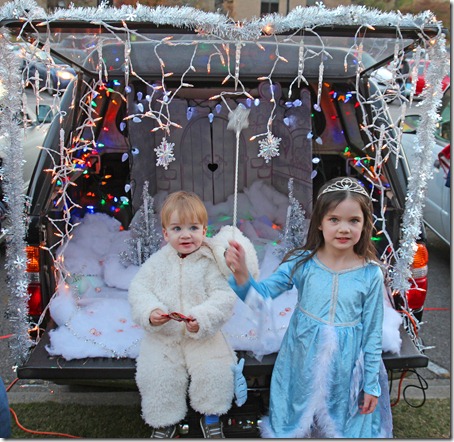 Ali remembered the extreme businesslike attitude that it takes to hand out candy to 3,000+ kids, so she did a few stretches, planned her candy sorting strategy, and watched as the crowds drew nigh. 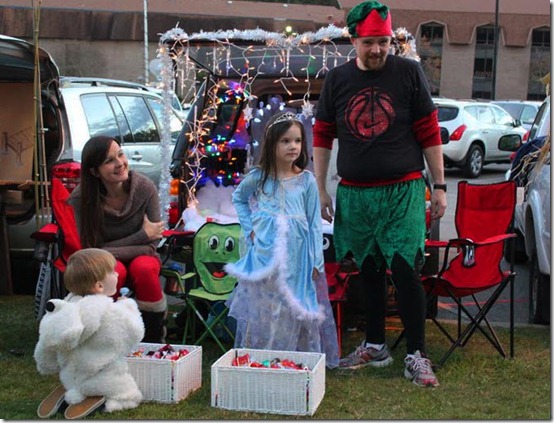 (While Noah tried to stash as many suckers as possible in his Polar Belly.)

The superheroes landed, and Ali set to work. 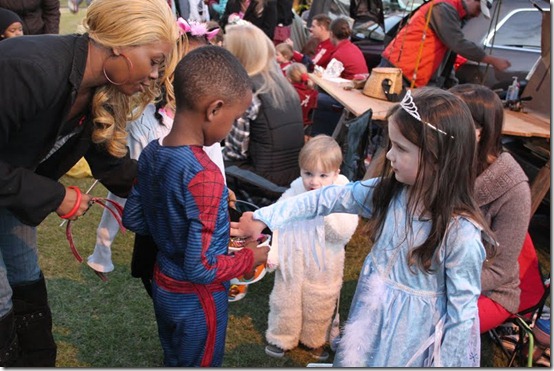 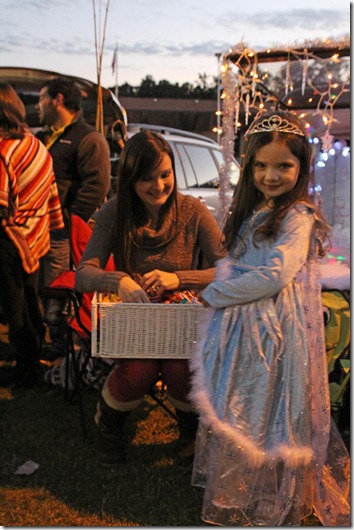 Noah watched, slurping down candy, confused as to why his sister would give it all away. 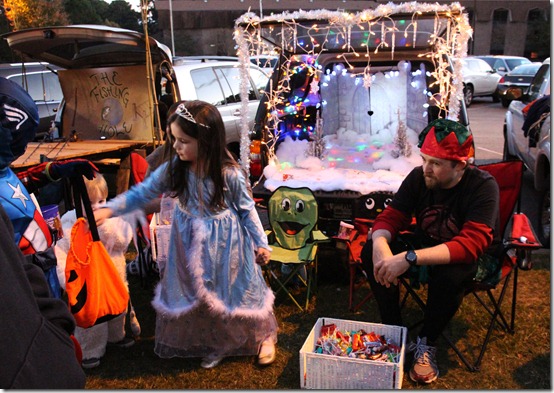 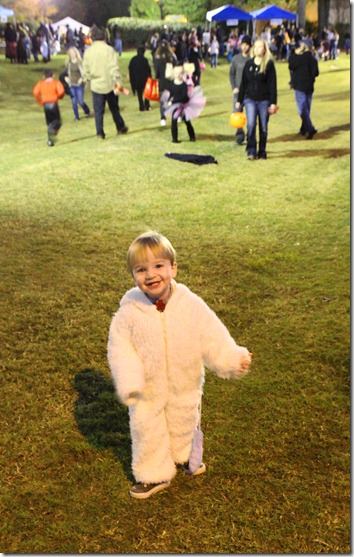 Pop, back from Memphis, with his own “custom” Halloween costume, or eye at least. 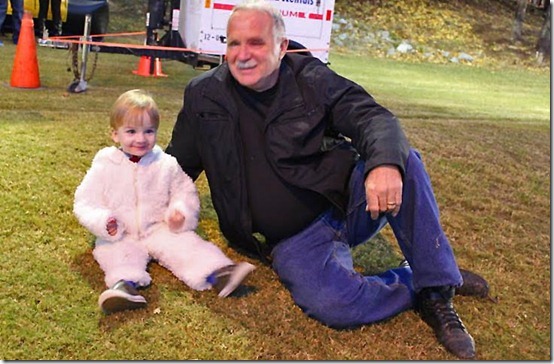 Ali exhausted early and was swept away by her Fairy Godmother to go candy-collecting, 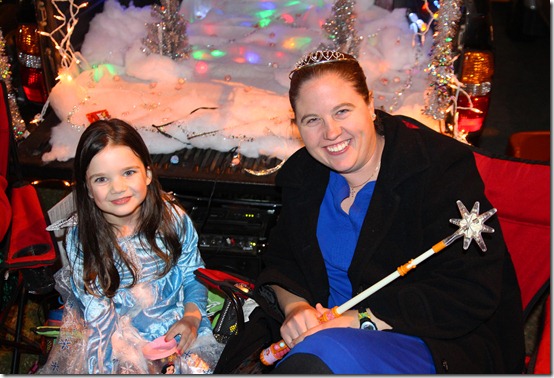 And so I re-recruited Noah – just to see if he would actually give the candy away.

Surprisingly enough, he did.  But he painstakingly made every kid wait a good fifteen seconds as he contemplated letting go of the goodness, 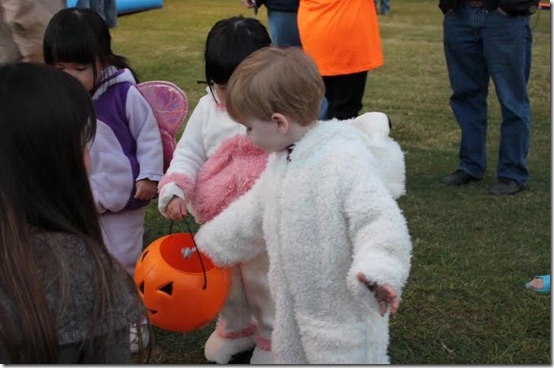 and then was the King of Awkwardly Long Eye Contact, just daring them to not appreciate the gift of which he bestowed. 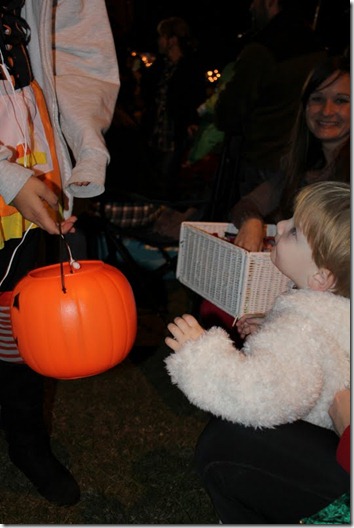 Noah and I broke away to check out the other trunks as he sucked the life off of yet another sucker stick. 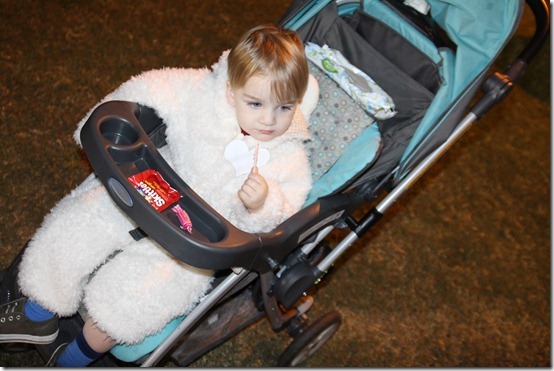 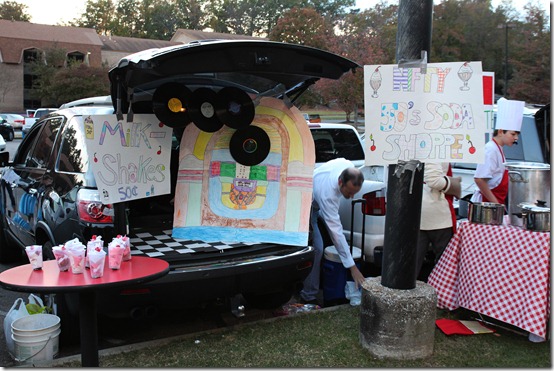 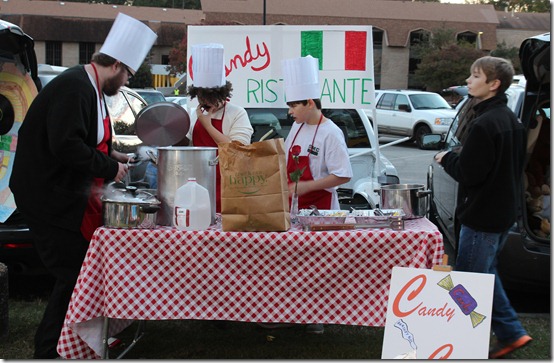 The iPhone that dropped candy out of the bottom upon choosing an app, 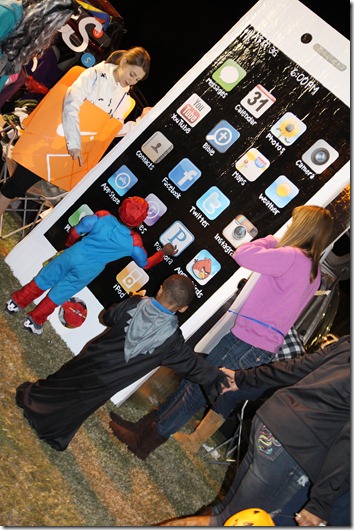 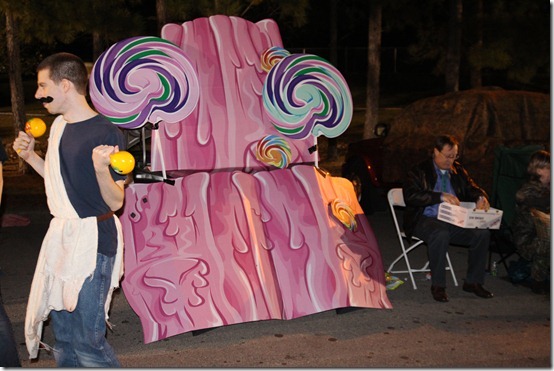 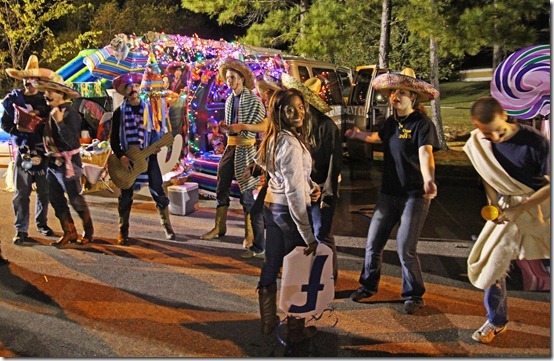 And, strategically choosing the last stop of the trunks, Heaven. 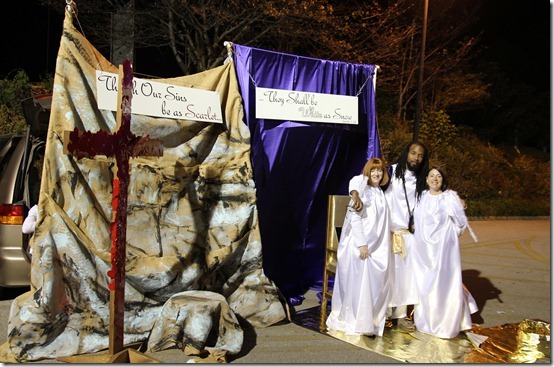 It was a long night for Polar Bears everywhere. 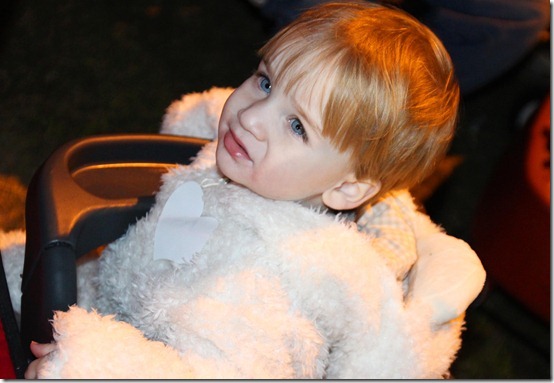 But fortunately, there were substances available in a high enough volume to drown any amount of sorrows. 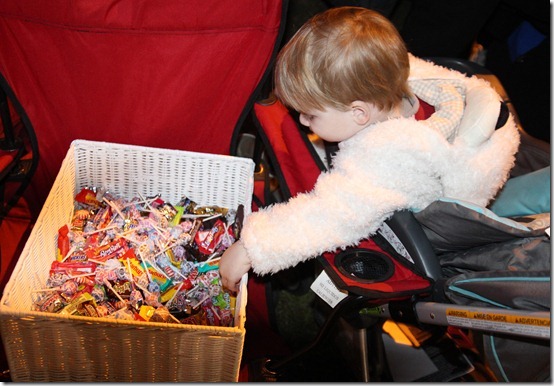 And because there just haven’t been enough already, here’s a gratuitous cute photo of my kids. 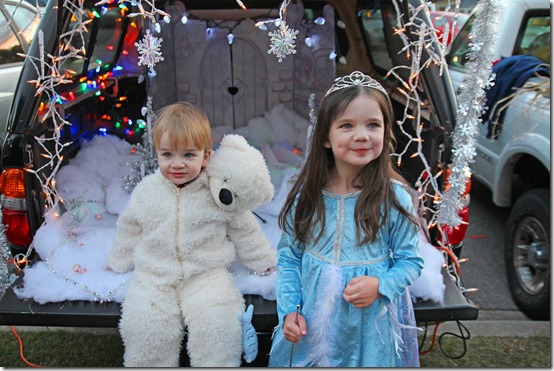 Because that’s the real meaning of Halloween.

(That, and stealing all of the good candy after they go to bed.)

24 thoughts on “The North Pole of Halloween.”