For the weekend before my birthday, Chris took me to one of my favorite places on earth: The General Woods Inn. 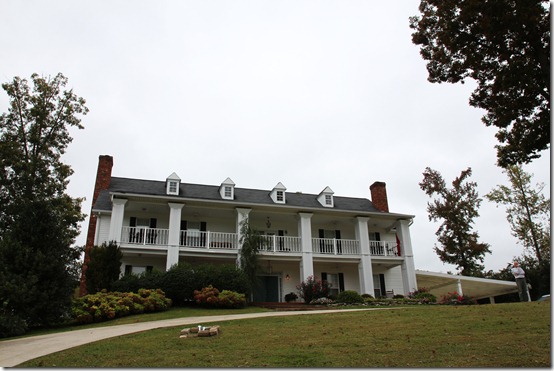 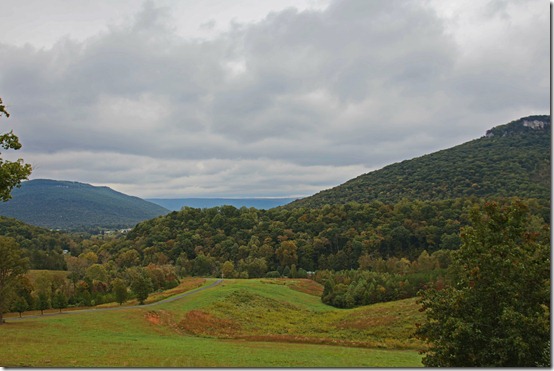 3.  It’s only two hours from my front porch.

A quick geography lesson: my city, Birmingham, is at the very tippy-bottom of the foothills of the Appalachian Mountains.  Which means that we could by no means be considered a “Mountain City,” but we have hills (that we refer to as mountains) that we’re very fond of – hills that give us views like this: 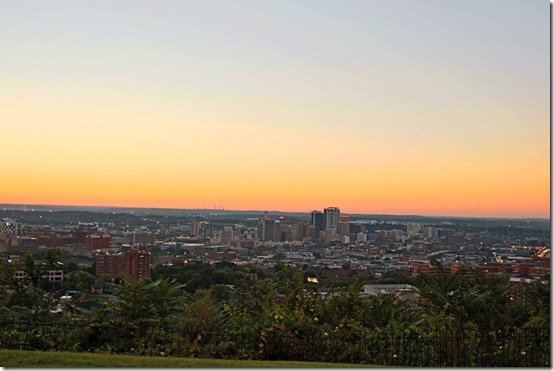 Thanks to our foothill status, it only makes sense that if you start driving north out of Birmingham, you’re bound to run into some fabulous vistas very quickly.

My favorite of these vistas happens to be located in the part of Georgia that is pinched so hard between Tennessee, Alabama, and I-59 that it probably has a water blister. 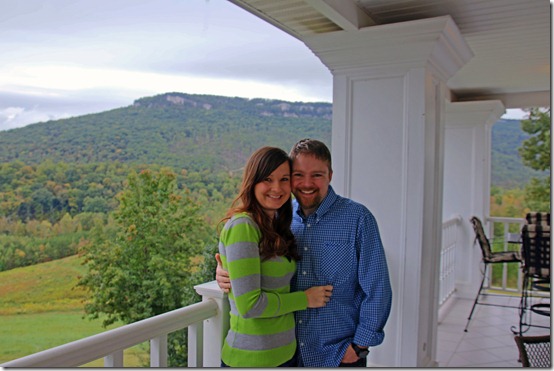 We discovered it by accident three years ago when I needed a quiet place to retreat for my Birthday, and since what trip, returning there has been my recurring daydream during every moment of stress.  We’ve been back a couple of times, and we love it so much that we even forced my parents to relax there.

(As an aside, they spent their visit touring one of Nadine’s other business interests: chicken farms.  By request.  My parents are so weird.)

(As another aside, Nadine is also working on renovating and opening another Inn in Michigan for all you northerners.  You’re welcome.)

When I called to reserve a room for my birthday this year, Nadine, apologized because there would be a wedding going on while we were there, and so she gave me a lower rate.

(Chris and I both felt guilty taking the lower rate, because we were unduly excited about the wedding lurkage that was to come.  But we took it anyway.)

We arrived a few hours before the wedding, and the dreaminess of the inn was only enhanced by the nuptial preparations. 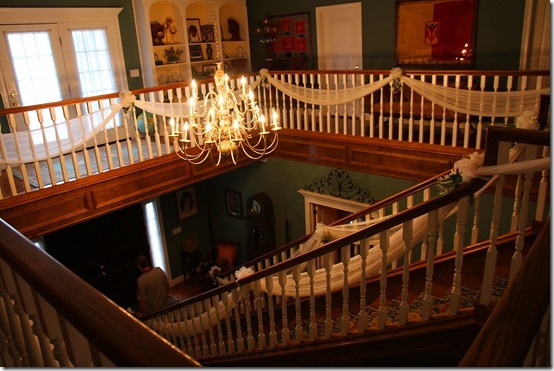 [As an aside, doesn’t that hallway look like an ideal location to angrily kick tuxedo hangers about in the late evening? That’s what one of the groomsmen thought.]

The romance floating in the air made me begin wondering how I could talk Chris into marrying me again.  In Downton Abbey attire. 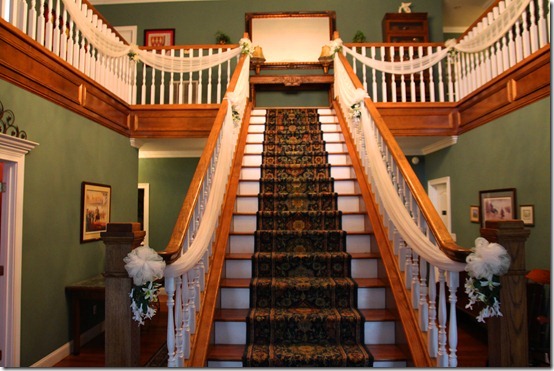 Even without a wedding going on, the inn is magically decorated with both an antique flair and a General’s memorabilia, 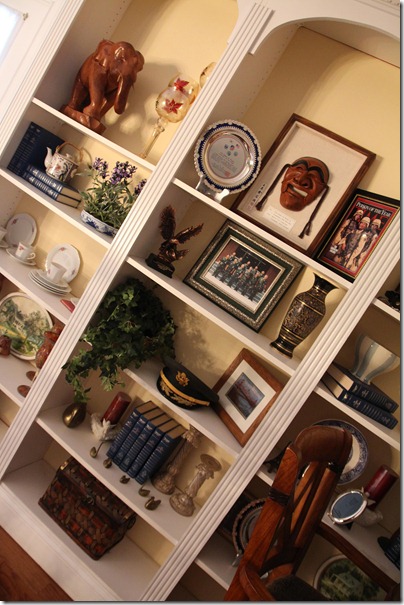 And I really felt as if I needed one of Mary or Sybil’s fabulous dresses to dine there.  Or at least a dress belonging to one of their Wild American Cousins. 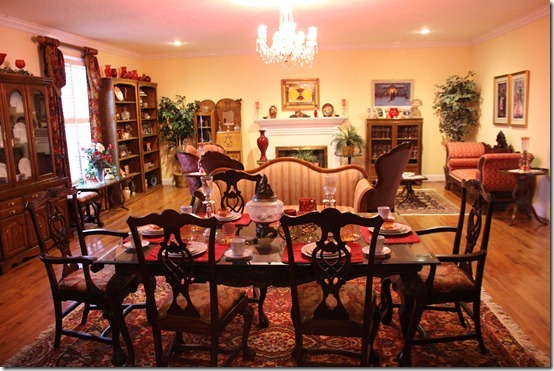 I could very nearly picture the Dowager Countess sitting upright and unduly bothered in one of the highback chairs as I conveyed the matters of America to her from the couch. 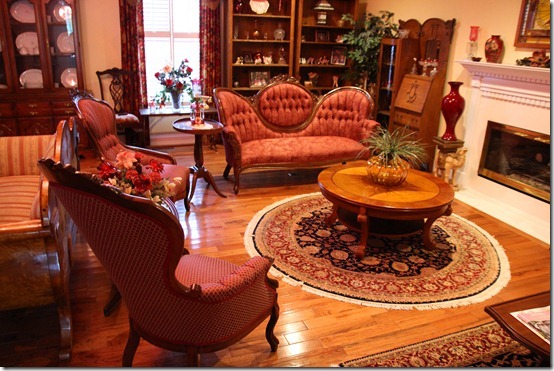 And – where was Carson??  It’s time for the bullion course!! 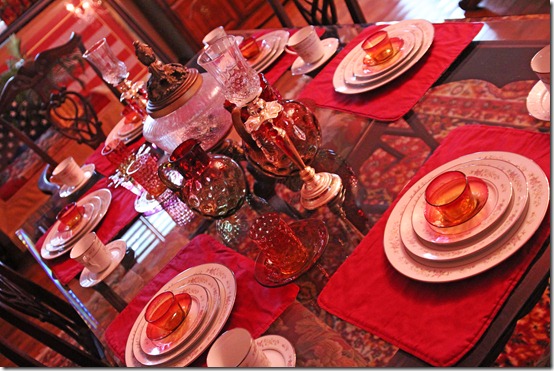 Outside, wedding preparations could make even the most unromantic O’Brien swoon.

Old Church pews, shaded by a white drapery tent, enveloped by stunning vistas on every side, 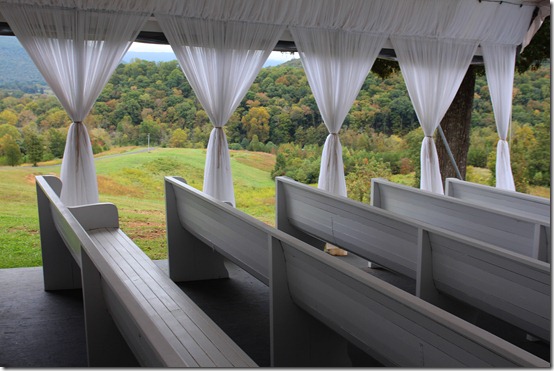 all facing the most amazing backdrop that any wedding has ever known. 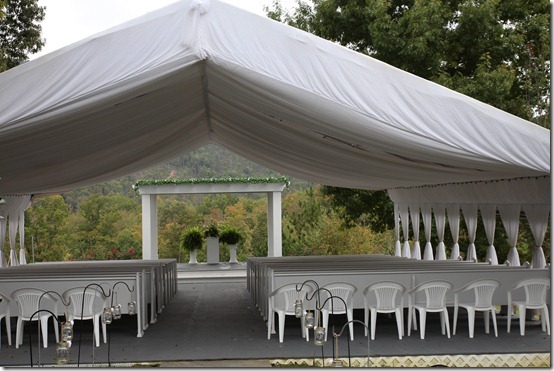 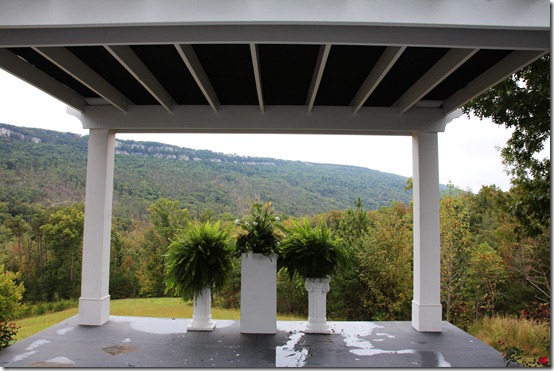 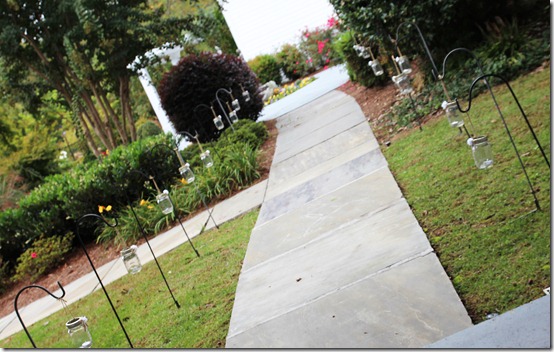 Under the reception awning, beautifully draped tables and chairs were prepared for guests, highlighted with burlap, gold, and flowers. 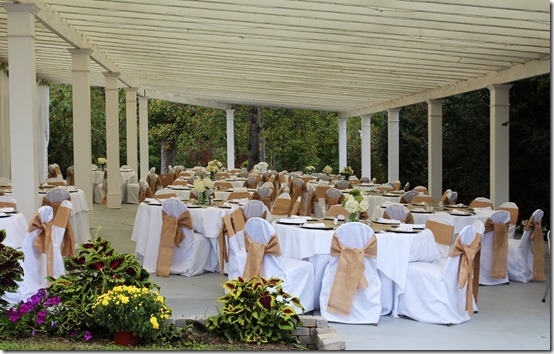 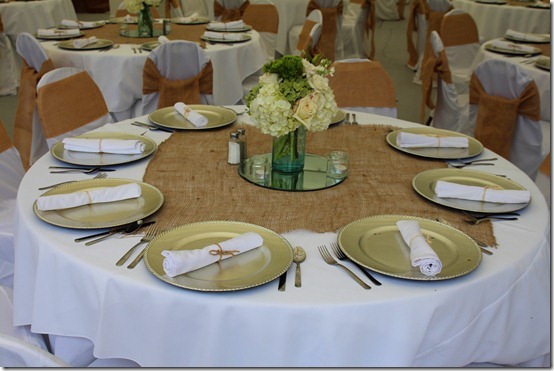 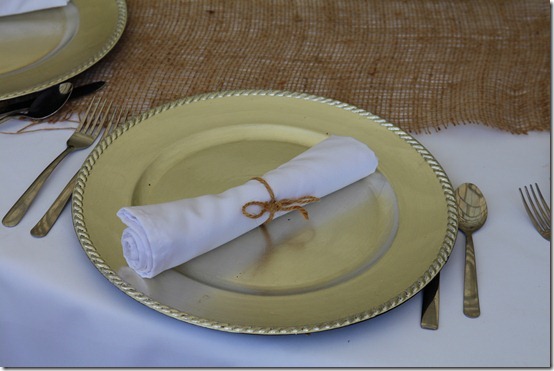 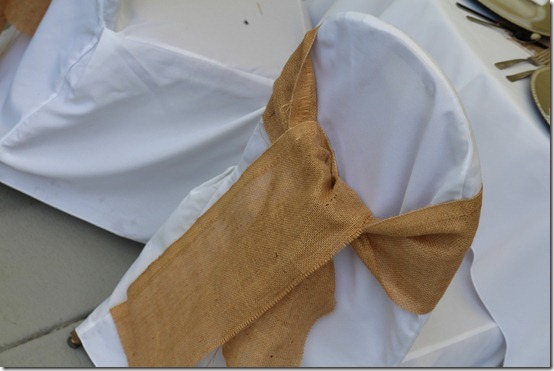 A garden of rose bushes surrounded the reception awning.  [Which is apparently quite dangerous to get in a fight with.  Or at least so claimed a bridesmaid much later that night.] 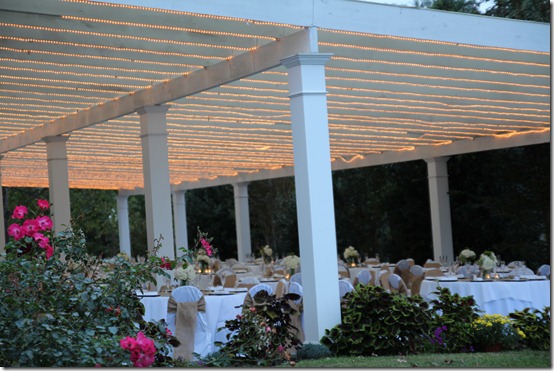 The courtyard and pool area was prepared for a live band and cocktail hour. [And a thorough post-dinner party that ended with a tux in the very frigid pool.] 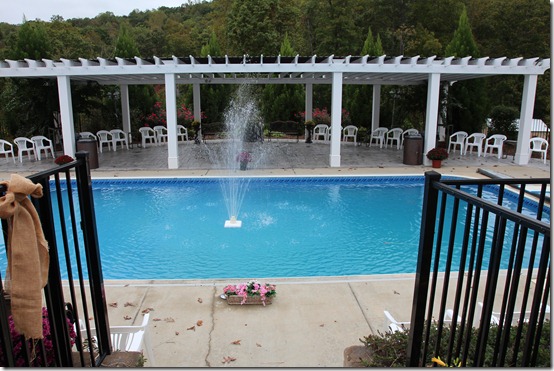 A couple of hours before the wedding, we assumed our highly anticipated position on the front porch, where we usually do nothing but stare at the mountains, and excitedly waited for our added benefit of getting to be those nosy inn-dwellers who watch other people’s weddings, analyze the interactions between the parents of the bride and groom, and make assumptions about the familial relationships of the future. 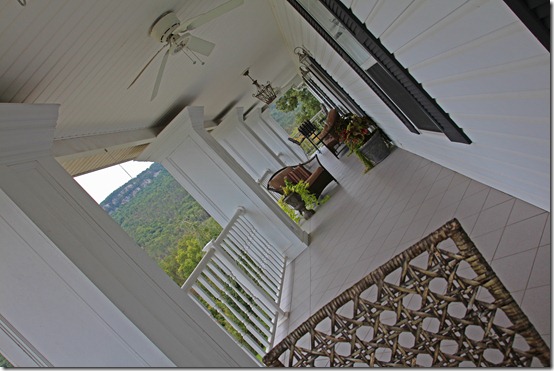 By the end of the pre-wedding photography, we had their Future Grandparent Styles pegged.

We lurked around until after the ceremony, then headed out to dinner during their Cocktail Hour.  The reception awning was beautifully lit and ready to be enjoyed. [And the tablecloths sat elegantly and innocently, not realizing that two of them would later be stolen and tied to the getaway car.] 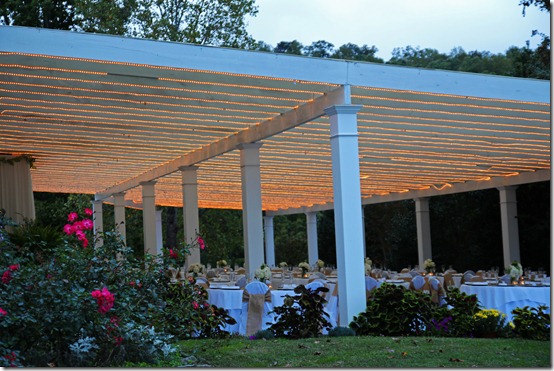 When we got back from my lingering birthday dinner, their dinner was also long over, but the lights were still blazing. 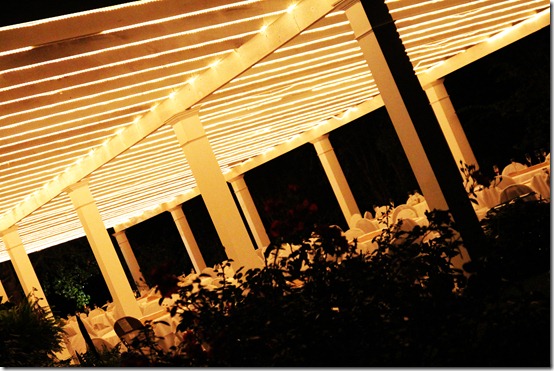 We assumed our nosy position on the back porch, overlooking the growing-in-frenzy party that had moved back to the pool area. 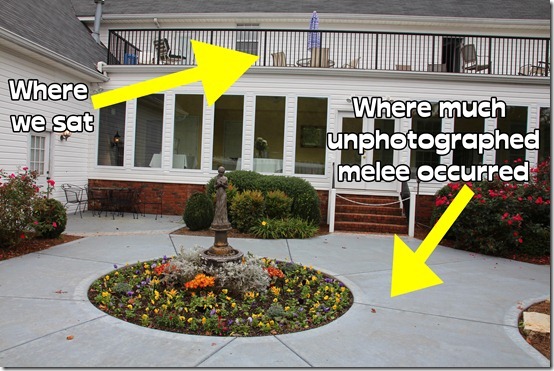 It was fabulous.  Never have I been so entertained at a Bed and Breakfast.

When we had finally gotten enough post-wedding amusement [and had watched the Bride and Groom escape right before the ‘friends’ of the groom were able to successfully tip his brand new Jeep over and down the long hill], we retired to our room.   Although I preferred the romantic décor of our usual place of rest, The Patterson Room,  by the next morning, I had decided that from now on, we would be staying in the O’Connor Room.

The bed was MAGICAL. 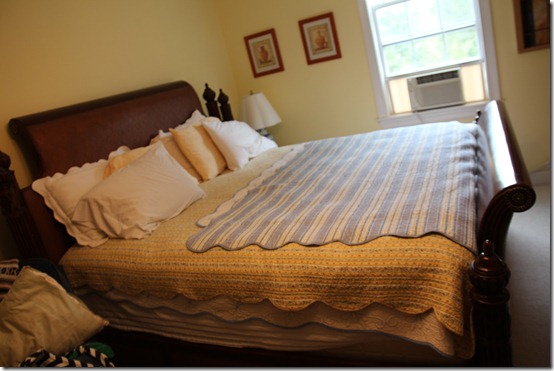 I woke up the next morning, perfectly sunken (sunk? sanked?) into the mattress, knowing that it was made for my body.

Since she’d already nearly lost a couple of tablecloths [they were rescued just in time], I decided a more honest approach would be in order, and asked her about the mattress at breakfast instead.  I discovered that it was locally made by Murmaid Mattress.

I spent the rest of the day trying to talk Chris into the fact that we need a new mattress.  Aren’t they only supposed to last for 10 years?  And we’ve been married 11 1/2 years.  Clearly our mattress is totally shot and we will find ourselves at a place of imminent death and/or injury unless we replace it.

After breakfast, we headed back out on the porch, doing nothing but watching the sky play silently with the multi-colored, panoramic mountains. 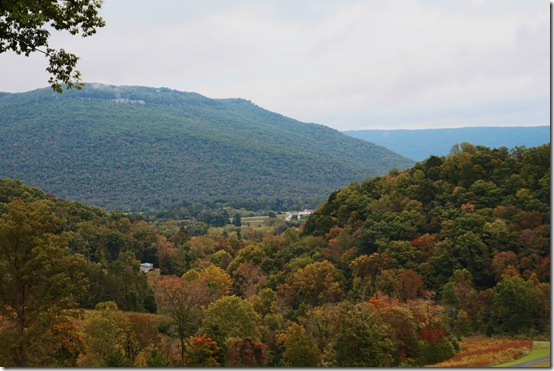 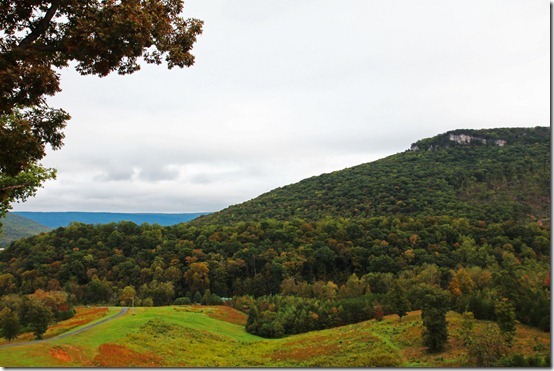 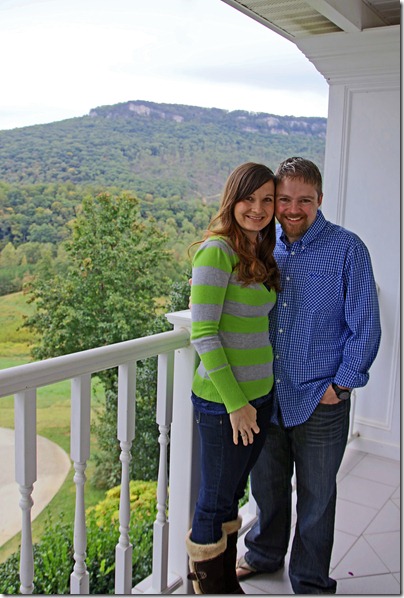 Sadly, the time came to go home.  After all, we had kids, and jobs, and blogs, and other such intrusive responsibilities. 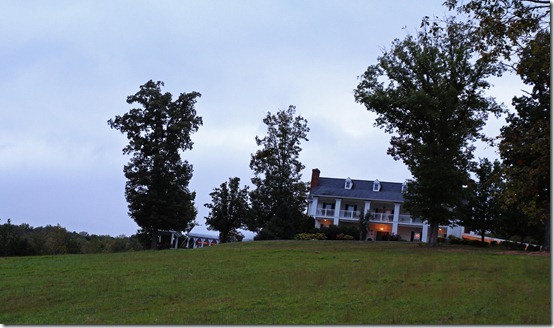 But if we could move them all to The Inn, we totally would.