Last week, I experienced a new echelon of sick.

The sickest sick I’ve experienced in many moons.  And suns.  And stars.

Three days of raging illness with every symptom in WebMD’s rather extensive checklist.

(Except for “craving to eat ice, dirt or paper” but definitely including “poor personal hygiene.”)

The kind of sick that even though I’m a stay-at-home Mom and completely responsible for two little lives, I at times could not, no matter what I tried, hold onto consciousness.

Then I’d wake up to discover that my youngest had blanketed the entire room (including all furniture) with meticulously crushed cracker crumbs, and that my eldest had scattered notes all around my resting place as if she was leaving them on my grave. 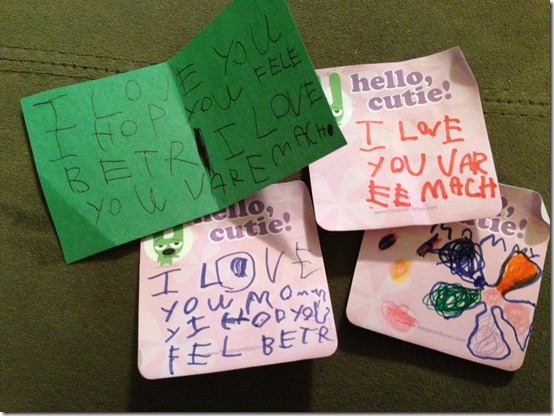 It’s actually disturbing how minimally concerned they were by the fact that they seemed to have assumed I had died.  They played and chased and entertained themselves, and on the occasion that I would open my eyes, Noah would look over, smile, and say, “Hello, Mommy!!”, with mildly happy surprise over the fact that I’d figured out how to rise from the dead.

But we survived.  And most thankfully, no one caught it but me, despite their attempts at convincing me otherwise. 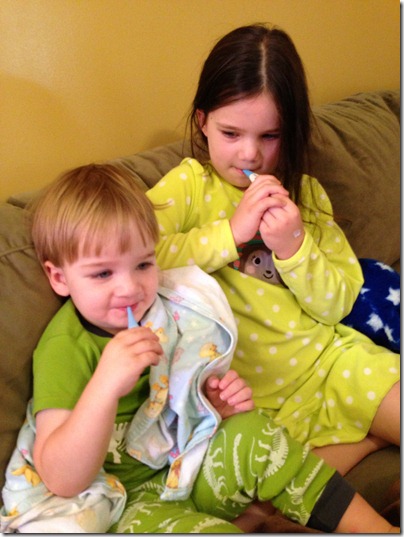 But the fact that no one else ultimately did concede to the illnesses’ control made me suspect a possible chance of food poisoning.

(I did eat leftover shrimp the night before contracting my illness.  And shrimp do seem to carry an air of suspicion that other foods do not possess.)

(Except for oysters.  I would indict them of any crime over shrimp.  But then again I do NOT eat oysters.)

The night after my recovery, I had a very realistic dream of it being the middle of the night (as it was), and me running into Ali’s room just in time to see her voluminously puking off the side of her bed.

…Which was followed up by me screaming at God, with much weeping and gnashing of teeth and caustic questioning of his motives in torturing me so.

(Do you think that God would get upset over someone severely questioning his judgment while dreaming?  I do hope not.)

But the worst part of the entire illness was clear: My Illness Weight Loss Amounts fell significantly short of projections.  And IWLA is the one silver lining that I suspect everyone, whether they admit it or not, looks forward to at the end of such a virus.

I was cheated.  Totally cheated.

But at least I’m not craving dirt.

15 thoughts on “On Being Gravely Ill.”