There are certain things that your parents drill into you enough that you grow up completely believing.

For instance, saying “Yes Ma’am” and “Yes Sir.”  This was a known requirement of righteousness in my family – it wasn’t an option.  Even if we WERE on the other side of the country where people thought we were oddly quaint at best or sarcastically rude at worst.

Also – Star Trek: The Next Generation.  If you grew up watching it together as a family, you can’t just discard your great admiration and respect for Counselor Troi just because you find out later in life how very uncool it is to be a ST:TNG fan.  You can hide your feelings and you can suppress your desires to watch, but you can’t wash yourself entirely of them.

(But I’m not hiding them anymore.  I miss Q and Picard and Lwaxana.  There. I said it.)

Another one was late night shows.  My parents watched Leno.

I didn’t watch Leno growing up, but I knew that they did.  So I learned that Leno was the funny one – not Letterman.

This belief was only solidified by the fact that Mr. Leno was the first celebrity I ever met.

During my tween and teen years, my Dad’s job was to rebuild antique race cars for epic race journeys through Mexico, from China to Paris, and to be driven at the Monterey Historic races.  One of the perks of his job was to trailer said race car from Birmingham to California, family in tow.

Five days.  In a truck.  With my entire family.  Both ways.

(The “there” was always great, but I was done with my family by the last day of the “back.”)

However, I adored Monterey.

I would have preferred to just stay in the city, but the race was what we were going for, so we attended the Monterey Historics, too.  I didn’t comprehend it at the time (because I was way too bored to care), but it was a fairly high-brow event.  And Jay Leno likes cars, so of course he was there.

One of these years, my Mom and I were walking around the paddocks, and there he was, chin stretching out as far as the eye can see.

We whispered to one another in giggly schoolgirl voices.

Then Mom boldly walked right up to him, stuck out her hand and said “Hi, Jay!”   She shook his hand, then nonchalantly turned around and walked away.

I watched, awestruck at my Mother’s ability to be so forthcoming with a celebrity.

Jay watched, puzzled as to my mother’s odd take.

So naturally, when I became an adult shortly after I married Chris, I began watching Leno.  I never even gave Letterman a single night.  I didn’t question this choice.  It just was.

(I guess that Chris grew up in a Leno household too, because I don’t remember us discussing this lifestyle choice.)

If we were late enough in our dawdling about bedtime, Conan O’Brien’s super late show would come on before we switched off the television set.

We’d stare in disbelief, mouths open, at how ridiculously stupid and incomprehensible his comedy routines were.

(Does he think those impressions resemble reality in any way??)

(Does he realize how completely awkward he is?!?!)

We didn’t get him.  We knew that our friends did, but we didn’t.

Clearly, we were making the right comedic choices.

Then came 2009 and The Great Tonight Show Transition.  Jay moved to earlier in the evening, and Conan took over Jay’s timeslot.

Chris and I pondered over what we should do about this evening altering switch.  Should we DVR Jay and watch him in the normal timeslot?  Or should we…heaven forbid…watch…CONAN??

We’d heard about some of the funny stunts Conan was doing to start his new reign off right, so we decided to put our faith in NBC and give him a shot.

I submitted to my husband, skeptically yet dutifully.

By the end of the week, it was done.  We had become a part of the Conan community, and there was no going back.  It was as if the part of our brain that deciphers and processes Conanian Humor was switched on, and the awkward stupidness was suddenly mindblowingly hilarious.  We found ourselves cry-giggling constantly, shushing each other so as to not wake the child.

Our Leno recordings stacked up unwatched in the echoing loneliness of our DVR box.

“Rachel?  Hello… Rachel! Remember me?  We made eye contact that once?  I shook your Mom’s hand!! Hey! Rachel! Don’t forget about meeee!!”

Then came 2010 and TonightShowGate.  Conan was gone.  Jay was back.  Things were ugly.  Blame was flying.

We decided to give Jay the benefit of the doubt despite our suspicions and took up with him once again.

But we couldn’t laugh.

It was like watching the Awkward Drunk Uncle at a wedding, trying to be funny but being really, really dumb and more than a bit dirty-old-mannish instead.

“Has Jay changed?  What happened to him??”

We had a countdown until Conan was back – this time at TBS.  And we rejoiced greatly.

Every now and then we turn Jay back on just to make sure we weren’t wrong.  And we find ourselves puzzled all over again.  We don’t really understand how such a great shift in our brain’s connectivities could have happened, but clearly it did.

After all – I’ve never even met Conan!

And then there’s my parents.

I’m sure that their souls will be crushed when I finally come out with the truth: with my abandoning of the beliefs of my upbringing.

So, Mom and Dad, I’m sorry.  I still believe in Ma’am and Sir and I still miss Lwaxana, but when it comes to humor, this is how it is. 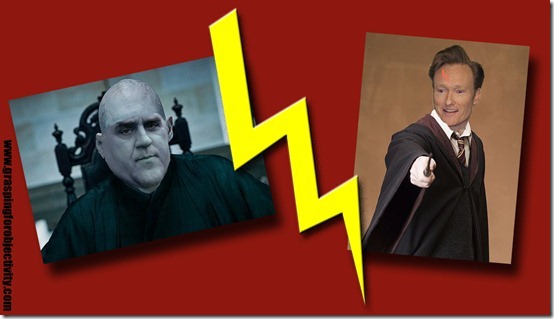 (Not that they get that analogy.  They aren’t Harry Potter people either.  Just call me Black Sheep.)

16 thoughts on “Neither Can Live While the Other Survives.”