Ali is officially in Kindergarten this fall, which means that this is my last year of “Casual Teaching.”

I’m going to sorely miss Casual Teaching – it’s served us well.  She’s learned much, with thanks to her iPad, placemats, and fake money.

But once she’s in first grade next fall, I’ll need to have prior preparation and lesson plans and records and curriculum and…stuff.  I hope that I can still make it fun, but I’m nervous about the officiality of it all.

(And the fact that if I’m going to be a teacher, I should really learn not to use words that aren’t words, like officiality.)

So this year’s aim is to take full advantage of the last year of Mommy’s Fly-By-The-Seat-Of-Her-Pajamas School.

On Tuesday, I could almost physically feel the need for a craft.  We all had nervous energy, and had been reading for a good part of the morning.  We needed to break out of the box.

So I headed to my craft closet to see what I could find.

I formed an idea, mixed some paints, gave Ali a paintbrush, and hoped that Noah’s lunch would distract him for at least the first half of our craft. 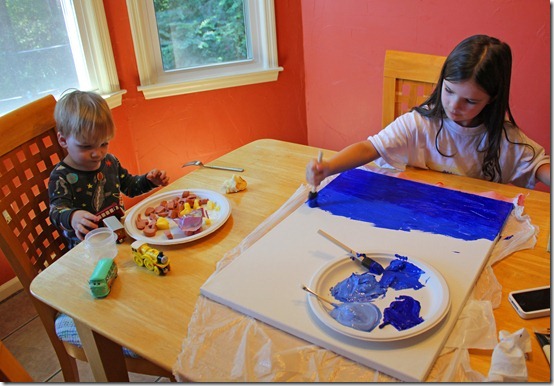 We started out talking about color mixing – about how white lightened blue, and black would make it darker. 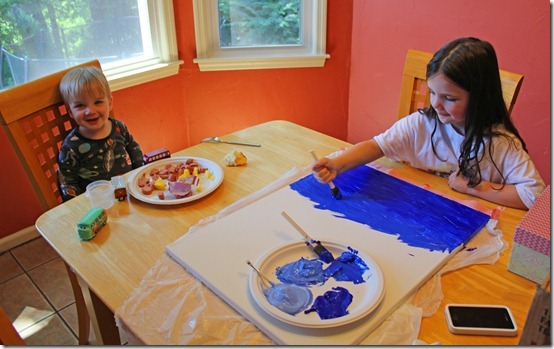 Ali learned the word “Horizon”. We talked about blending from dark to light, and how the sky looks when the sun is going down. 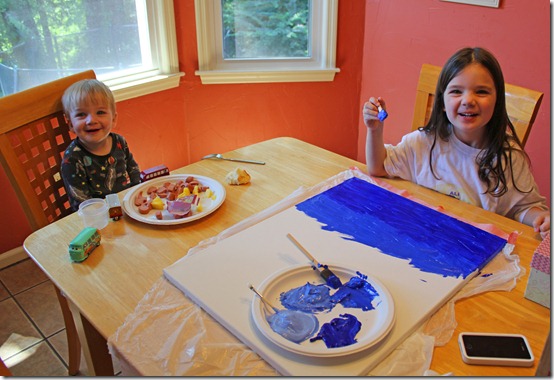 Noah learned about paint viscosity and it’s effect on a car’s ability to roll. 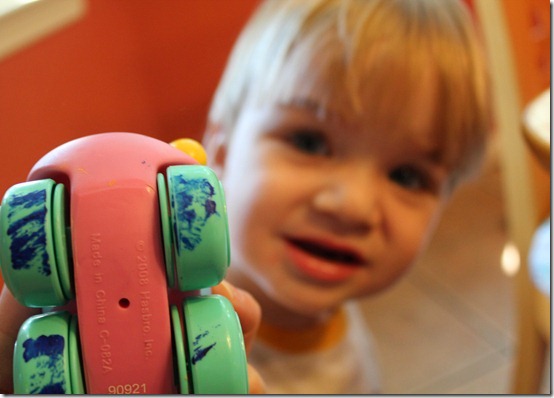 Ali learned about brushstrokes and how to make them all “back and forth”, and not in circles. 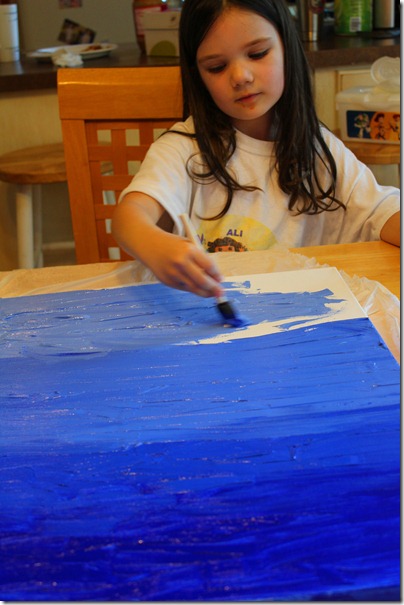 Noah learned that if you’re quick enough, you can try your own hand at brushstrokes. 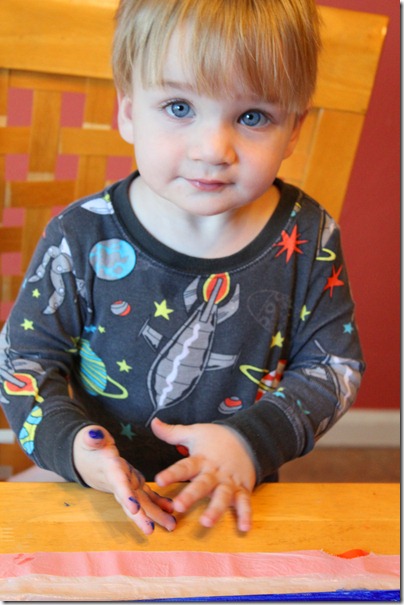 Ali learned that every painting needs an irregularity to be unique, and little brothers are great at providing just such a thing. 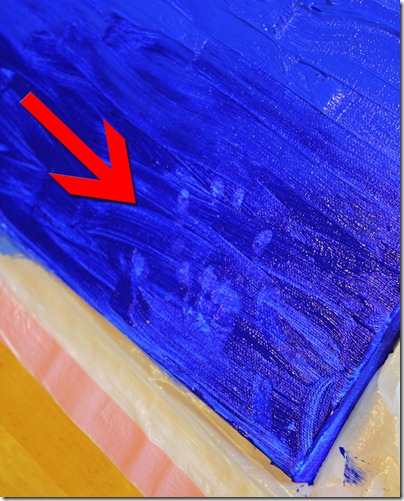 Noah learned that although the act of painting is often short-lived, the consequences are far more long-lasting. 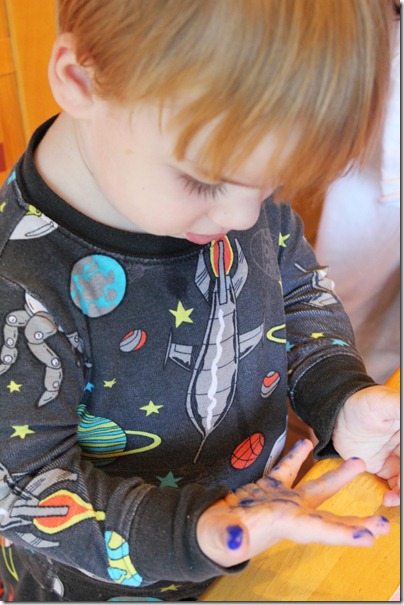 Next, I set Ali to work picking out some bright crayons and unwrapping them.  I told her it would involve fire, but I promised not to hurt her – she could be my official crayon holder.

She opted to be my photographer instead. 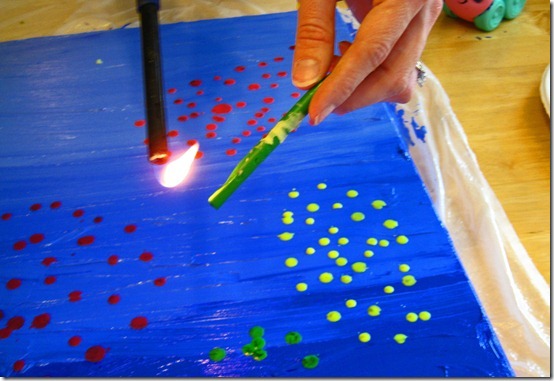 Ali learned that crayons don’t turn into paint when they get hot, even though that’s what it looks like, 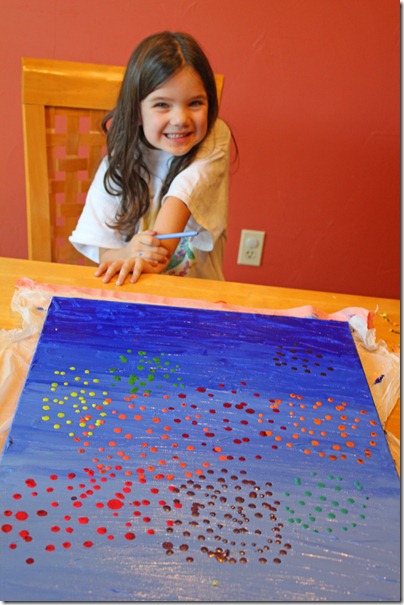 …and that crayons aren’t nearly so pretty after being burned. 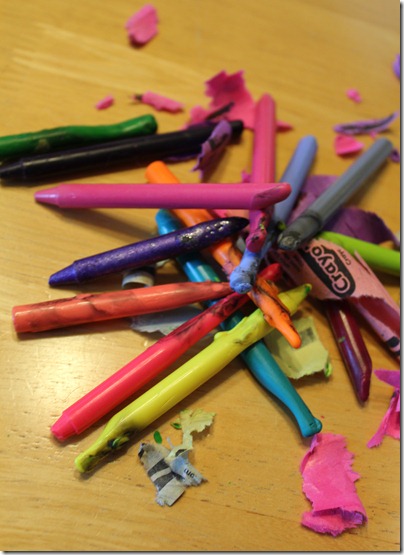 Ultimately, everyone learned something, including Mommy: she learned that a boy’s lunch is no match for the intoxicating draw of participating in art. 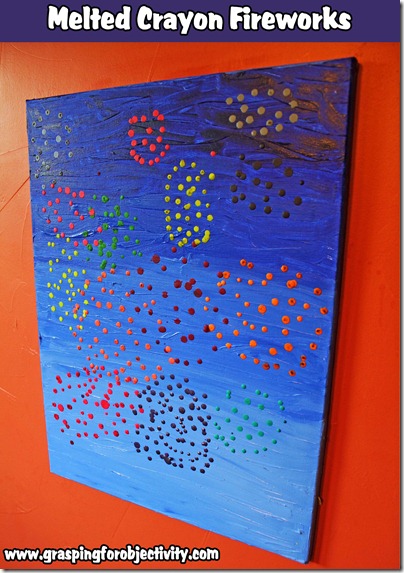