Ali’s Godmother is one of my best friends, Amanda.

Amanda is 32, and Ali loves her dearly.

…But Ali is concerned with her complete lack of Godfather, so she is quite impatient for Amanda to find her Prince.

As such, she petitioned Amanda.

“Maybe you could try kissing a frog?”

“I absolutely would kiss a frog!!”

I looked at Amanda skeptically.

“You know that Ali doesn’t forget anything, right?”

She shrugged, oddly indifferently, and told me her reasoning.

Amanda has a friend named Janet. Janet also made it to her 30’s without finding a Prince, so she agreed to kiss a frog.

She kissed a frog on a particularly fateful afternoon, and that very night, she met her husband, to whom she has now been happily married for many years.

Therefore, Amanda was willing to try this experiment – in theory, anyway.

But we have a bunny neighborhood, not a froggy one. So I told Ali that she was going to have to find her frog elsewhere – perhaps out in the country at Gramamma’s house.

The very next time Ali went out to my parent’s house, she informed Gramamma that she needed a frog. And she needed a frog now – “Because My Amanda said she would kiss it to find her Prince!!”

A few months went by, with occasional reminders from Ali to Gramamma regarding her intense need for a frog.

Finally, my Mom remembered. She and Dad were coming to our house anyway, and she happened to run across a frog before they left.

(Hopefully they have equal magical qualities.)

She shoved the FrogToad into a cage that she just happened to have lying around, and she and Dad set off for our house.

A few minutes into the drive, she noticed FrogToad hopping around the floorboard.

FrogToad hopped over to Dad’s feet in the driver’s floorboard.

“I kinda hope he goes up your pants leg.”

Finally, Mom caught FrogToad, and went to quickly put him in the cage.

Because only MY Mom would have a FrogToad randomly hop into her car on the same trip in which she was delivering an identical FrogToad to a grandchild.

Which is how we ended up with The Two Princes. 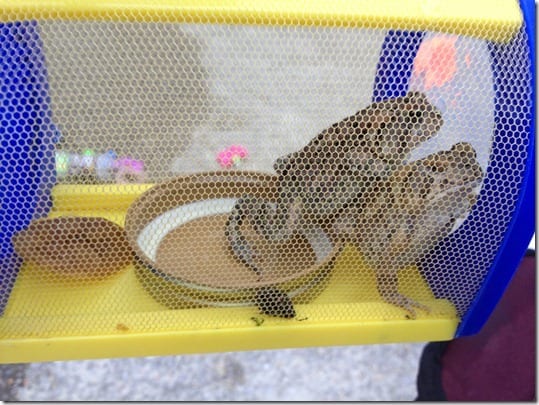 …who seemed to be fairly fond of each other.

We’re given the gift of two FrogToads on the hottest day of the hottest week of the year, with strict instructions from my Mom to give them plenty of water, and oh – be sure and catch some bugs for their dinner.

I texted a picture to Amanda.

“Your Princes await. And so does Ali.”

She promised to come by the next afternoon, and I began the nervous waiting.

How am I going to keep these FrogToads from dying before she gets here?

What if they have a heat stroke overnight? It’s going to be that hot all night long.

I attempted to catch bugs, but failed miserably. I did manage to get one moth in there, but the FrogToads made it very clear that their palates did not allow for the consumption of moths.

The next morning, I texted Amanda again.

“Your Princes are looking hungry!!”

I watered them several times. I worried about their mental heath as they sat maniacally by the cage door.

Noah, when given the opportunity, would pick up the cage, hold it sideways, and shake it, watching them with fascination and a bit of terror.

This could not be good for their well-being. And no FrogToad is going to offer any magic if they’ve been mistreated beforehand. It’s just the facts of life.

Noah excitedly gave her The Princes. 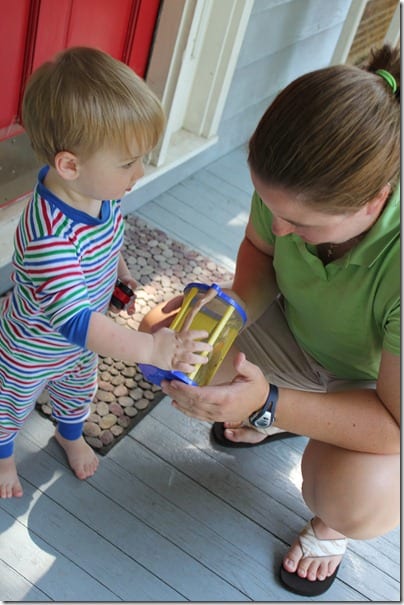 Amanda retrieved a FrogToad, who immediately started attempting an escape. 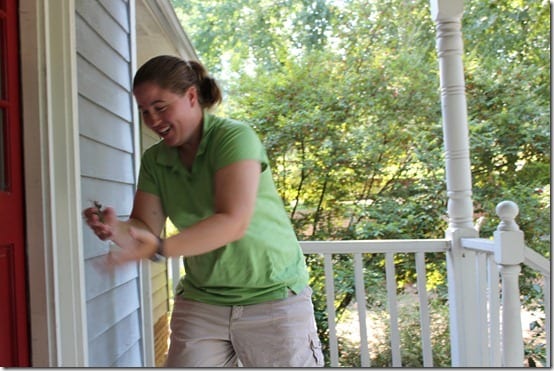 She wrangled him in true Cowgirl fashion. 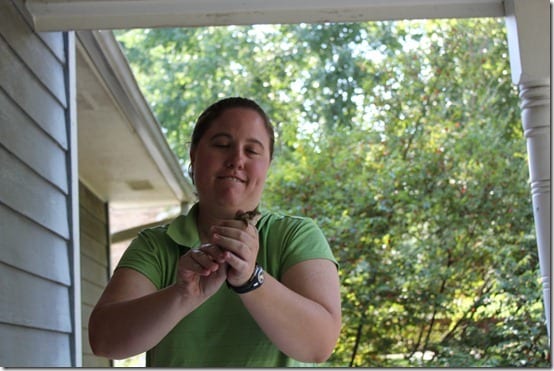 Then began to actually think about what she’d agreed to do. 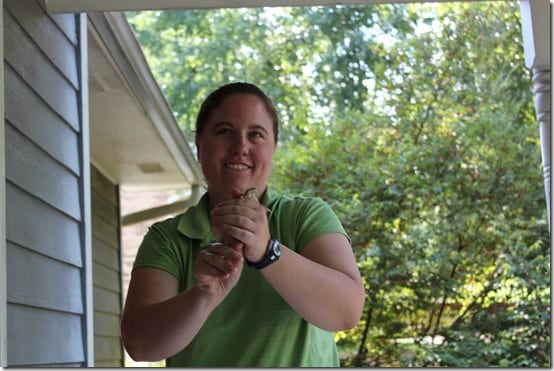 Was this worth it? 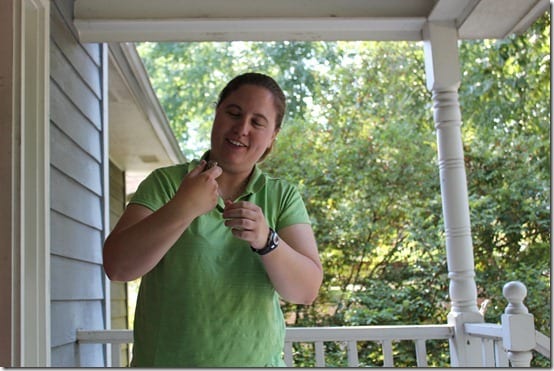 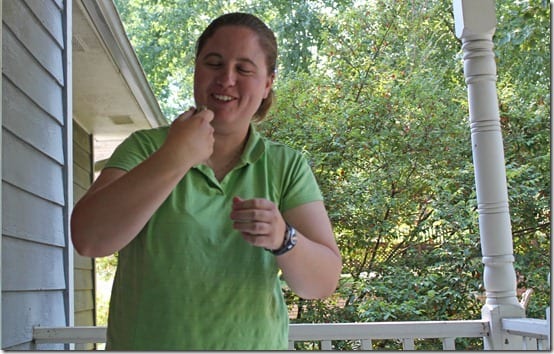 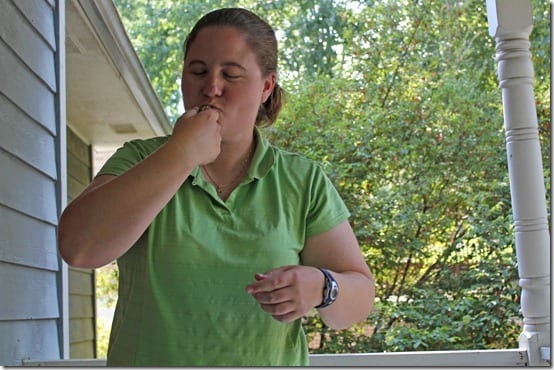 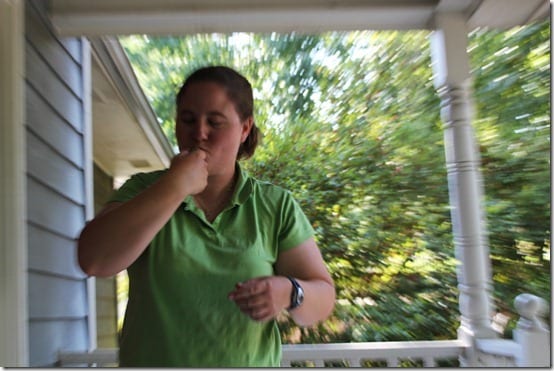 When Amanda finally ripped her lips away from his, she most likely wondered if the fact that she let me photograph her lip to lip with an amphibian would help or hurt her search for a man. 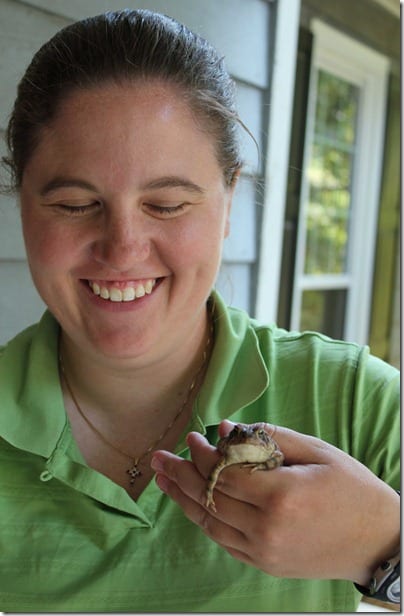 But the Prince seemed happy. Before the kiss, it was all about the escape attempts. After the kiss, he was completely calm.

Perhaps even a bit arrogant. 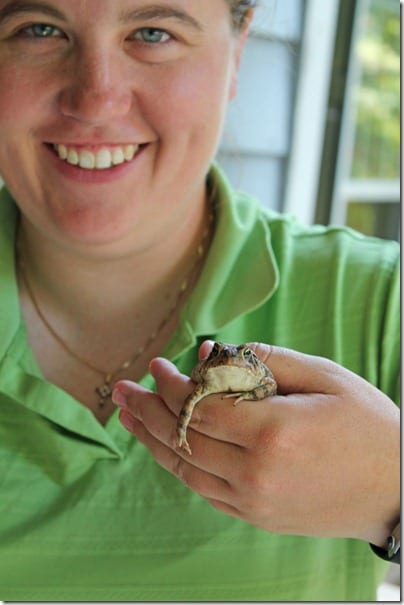 Apparently, he’d been waiting a long time for that.

After both FrogToads had hopped away, Ali removed herself from behind the swing at the other end of the porch where she had been hiding for the entire kiss scene. The FrogToads are now happily living in freedom under our porch, hopefully with a palate that does allow for the consumption of mosquitoes.

Amanda is awaiting the arrival of her Prince – we expect him any day now. She even went to Lowe’s three times the next weekend, but left with zero leads. If you know of his location, please feel free to send it our way as soon as possible.