When I woke up Saturday morning, Chris came to talk to me about the day’s plans.

“So it’s relatively not-too-hot outside, and it’s not supposed to rain, so I was thinking we should take the kids to the park.”

“The park?  It’s Saturday.  There’s going to be a birthday party going on – I guarantee it.”

I am not, in general, against birthday parties.  However, as I have mentioned before,  we live adjacent to a fancy suburb of Birmingham.  Therefore, all nearby parks are in said suburb, since we live in unincorporated Jefferson County, a county is beyond bankrupt (a story for another day) and so of course we have no parks of our own.

And when you have a birthday party at a park in a prestigious suburb in Alabama, it is nearly guaranteed to be a smock-required birthday party.

Smock in and of itself is, as I have said before, a personal choice – I know a lot of people who dearly adore their smock in the same way that one would feel about a precious Grandmother, or perhaps a cherished 15-year-old Bassett Hound (one of these smock lovers has even guest-posted here), but when you combine smock + birthday party + prestigious suburb + park, it can tend to get a bit intimidating.

But I couldn’t come up with a better idea, so I agreed to his plan.

We arrived at the park.  Proving my prophetic powers to be quite accurate, we immediately saw that the pavilion was completely Pinterested-Out with fabulous party deco, at least 30 place settings were meticulously designed on the picnic tables, and an entire side of the pavilion was overflowing with presents.

Oooooh boy.  It’s going to be a doozy.

Within a few minutes, the place was (quite literally) crawling with smock.

And running, and walking, and screaming, and playing.

Dozens of parents were running around, photographing their $100+ clad children.

Knowing that our very presence was a bother, I tried to console myself by tweeting about it.

At the park. There’s a smock-required birthday party going on. Hope my kids don’t ruin the background of their photos. pic.twitter.com/NhL5riWE

Every mother in attendance was also in uniform: full-length maxi dresses (despite the fact that it was July in Alabama), 4-inch+ wedge heels (in which they were unsuccessfully trying to maneuver the sadistic wood-chip playground), and a significantly pregnant belly.  The latter being a fact that Chris also noticed:

There are a lot of pregnant bellies at the park this morning. I need to get @ObjectivityRach out of here. #knowwhentoholdem

I tried to stay where I belonged: on the other side of the sidewalk.  After all, I live in the county – I know my place.

Ali took Chris on an adventure through her secret park trails.  On the way back, I saw her running straight through the birthday party scene to come get me.

I groaned, knowing that she was surely messing up the utopian scene.

For the record, she wasn’t at all poorly dressed – she was wearing my favorite brand, an adorable Tea Collection outfit, that by any other standard would be quite perfect.

But Tea Collection is no smock. 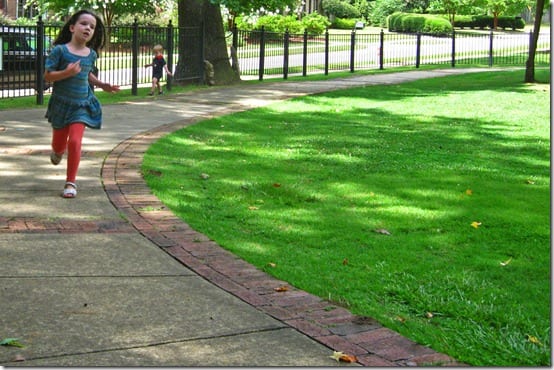 Noah, on the other hand, was wearing a Carter’s romper that was at least two sizes too small, giving him a very special case of Diaper Toe. 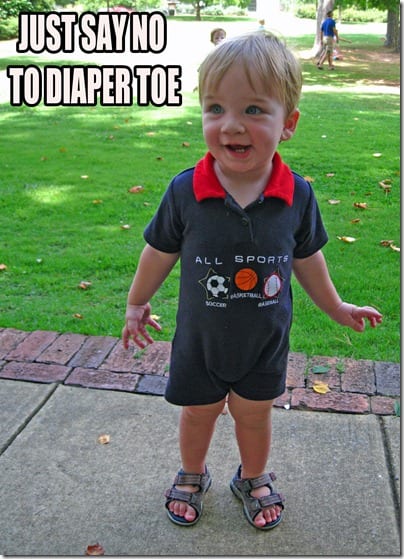 Which, on this city’s scale of acceptable children’s attire, is nearly a felony. 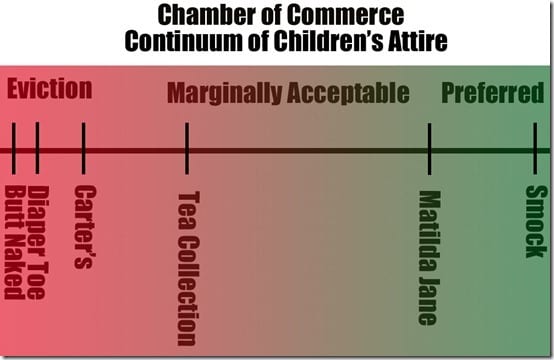 But Ali wanted me to come see her secret trail.  Which meant that I, also, would have to cross the sidewalk.

On the way back, Noah stopped for a moment to admire an especially interesting blade of grass.

At which time, I noticed one of the moms taking a posed photo of a Smock and her Dad.

She was about 20 feet in front of Noah, but I realized that he was indeed making my tweet come true and was going to be in the backdrop of her photo unless I acted quickly.

Right as I was turning around to go back and snatch him from his undesirable location, she lowered her camera, motioned angrily for her muses to wait a moment, cocked her head in my direction, and just stared at me.

She didn’t have to say it.

I knew what she meant.

Her thoughts were loud enough.

“Please remove your Diaper-Toed County-Dwelling Blight from my photo. Immediately.”

My heart raced as I felt the condemnation of her cutting gaze.  I grabbed him up so quickly I probably added a wedgie to his list of wardrobial issues, then took off  as fast as I could – back to The Other Side of the Sidewalk.

53 thoughts on “The Perils of The Park.”