I’ve had to do a lot of banking lately.

As I’ve mentioned before, I’m an accountant during naptimes.  And so I’ve recently needed to open up a few new accounts for a business.

Unfortunately, a stay-at-home-Mom cannot go into a bank branch during naptime.  So one has to take their two children along with them during a non-naptime period for that sort of work.

(This being more unfortunate for the bank than for me, but fairly unfortunate for me also, after I’ve taken a stupid breakable apple away from my one-year-old for the tenth time.)

(Why does a bank need breakable apples anyway?? This does not instill confidence regarding their financial stewardship abilities.)

Within this flurry of banking, the pinnacle of my banking discomfort occurred when I found myself sitting, waiting, dying, in a bank branch for an entire HOUR. 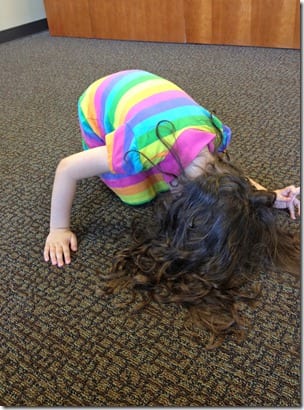 As an aside, this was also the same bank branch that once told me at the drive-thru, “Here’s a sucker for your daughter.  Sorry it took so long – I was trying to find one without hair on it.”

So change that to “hyped up on nasty hairy bank suckers.”

Noah was busy attempting to lick the office manager’s window with his paci still in and Ali was completely preoccupied with seeing how quickly she could skip through the length of the bank.

(What? Do you know how long it takes to run across a bank in the attempt to keep a toddler from licking foreign glass?  Don’t judge until you’ve sat with two kids in a bank for an hour.) 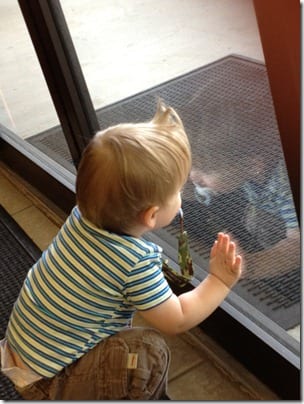 Fortunately, this bank is completely unpopular (probably because of their hairy suckers), and, therefore, largely uninhabited.

However, the customers that did come through were…a welcome diversion to my current situation. 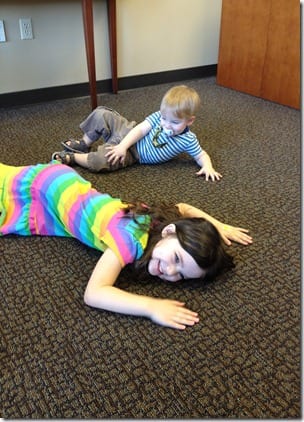 Customer A: A Businessman, clearly having been playing golf that morning instead of doing business.

Scratch that.  A salesman.  I could tell by the way he walked in and warmly greeted my BABY.

He’s not a prospective client, dude.  Just a kid with a gallon of lime green snot leaking from his nose.  Move along.

So salesman went up to the counter, reached across the counter, and grabbed the male banker’s hand – not to shake, but apparently just to hold.

He continued his grip on Male Banker’s hand (as Male Banker clearly tried to pull away, leaving the salesman only three desperate looking fingers in his grasp) as he stated everything that he needed that day.

“Hi there!!  How are you guys doing today?? It’s lovely outside, isn’t it?  I need to make a deposit, and oh – I need to order checks.  Can you put in an order of checks for me?”

Male banker, still in grasp, answered, “Well, I’m working on something for her right now, but I’ll take care of it later.”

Salesman finally loosened his grip long enough for banker to escape, then he headed over to the female teller.

(She quickly secured both her hands beneath the counter.)

He loudly introduced himself while trying to reach something, anything over the counter, and, when he saw he wasn’t going to achieve handholding status with her, he finally left, but not without giving Noah another shot at a sales pitch.

The bank got relatively quiet again (except for the sound of Noah bouncing his head down the glass wall to make that weird skin-to-glass squeaky sound, and Ali begging me to let her out of the chair in which I had temporarily confined her).

Then a girl walked in wearing sweat pants and grasping a wad of cash in her hands.

She walked up to Male Banker (thereby stalling my transaction even further), and began chewing him out for standing her up last night.

“We were supposed to get a beer last night!! Don’t you remember?  You think you can just stand me up like that??”

“(pouty) Okay fine.  Next Tuesday. (then suddenly thrilled) That will be awesome!!!”

She deposited her large wad of cash with the female teller, (as Male Banker was still working on my ridiculously timesucking needs), all while making small talk with Male Banker.

“So where do you think I should take Ben to get a beer?”

“You should take him to such-and-such bar.”

“Oh! And by the way, my boyfriend told me he loved me for the first time last night!  That was cool…”

“Um, I thought he already had?  Or is this a new boyfriend?”

She finished up her transaction, walked over and tickled my snot-covered baby with her man-juggling hands, and then left.

After an eternity of watching my children coat the lacquered furniture in sucker stick and snot wads, Male Banker called me up to the counter, and I hopefully ran up.

“I can’t open your account yet.  I need you to get signatures on this stack of paperwork first.”

At that moment, Noah came running up to me and wanted me to pick him up.  And as I did, the combination of his velocity transference and my intense banking dysphoria threw me off balance, and I fell, in flailing disgracefulness, flat on my back, with Noah landing happily on my abdomen.

Male Banker cautiously stood up and looked over the counter and onto the floor where I now laid…and just stared, silently and unfazed.

And then I realized: I was just another Bank Freak.

17 thoughts on “What Happens in the Bank…”