Much of my childhood, unbeknownst to me, was centered around my Grandfather’s ongoing health and livelihood.

Sometime before I was born, the doctors told my Granddad that unless he got active and lost some weight, he would die very soon.  My Dad immediately began trying to figure out what he could do to get my Granddad interested in anything, and he decided on old cars.

And apparently, it was exactly what the doctor ordered. 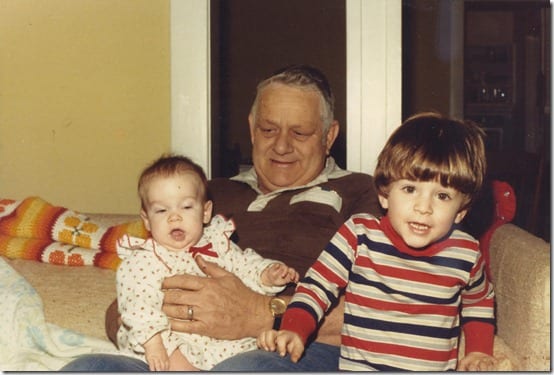 My Granddad, me in the middle of a belch, and my older brother JC who had clearly been shorn with a Tupperware bowl placed over the top of his head.

My Granddad lived to see me, many more grandchildren and great-grandchildren, and didn’t pass away until 2006 when I was pregnant with Ali. 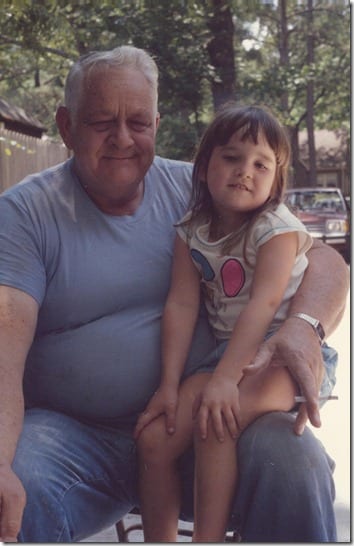 My Granddad and I again.  Thanks, Mom, for those bangs. 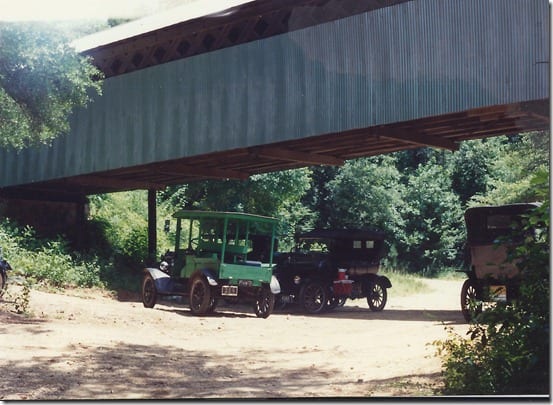 Covered bridges were a favorite destination on a Saturday drive.

This hobby significantly bled over into my own life. 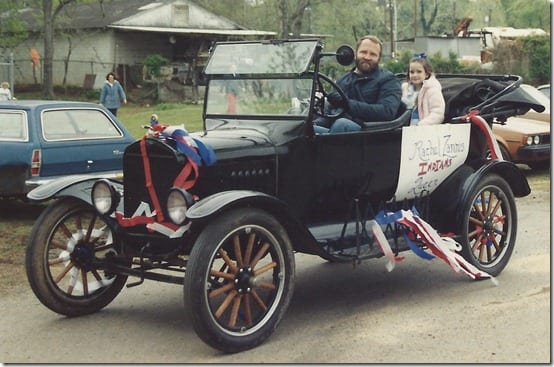 Besides being chauffeured in it when I was chosen as the prestigious Queen of my Brother’s baseball team, I remember a book report on Model Ts… a school presentation on Model Ts….learning to drive in a Model T (around the age of seven) which led to much confusion when there was no reverse pedal in a “real” car…and every family vacation that we ever took being a Model T tour. 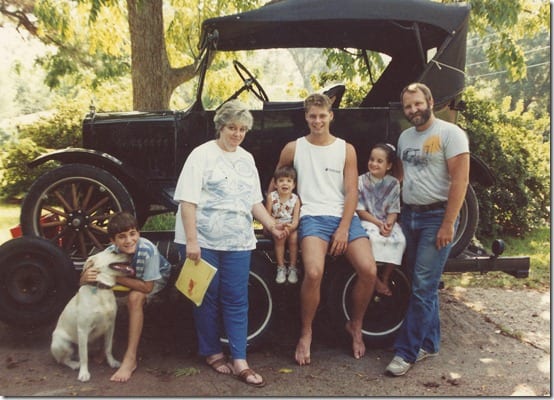 What?!? Tye-Dyed T-Shirt Dresses were SO cool back then.

We even ate from our Model T – Mom would prepare a batch of homemade Stromboli, wrap it in foil, and place it on the engine manifold.  We would head off in search of grand adventure, and when we got to where we were going, she’d pop it off of the engine and we’d eat our perfectly baked Stromboli.

(I had no idea that this was abnormal until recently, when a friend of mine refused to believe me when I offhandedly mentioned my Mom’s cooking methods.  I thought everyone’s parents utilized their vehicles as ovens in the early 80’s – I mean, Mom even had a cookbook for it.)

But back to Model T Tours.

You see, there’s this organization called the Model T Ford Club International.  It was mostly populated by unnaturally old northerners, but we were the token Young Southern members.  Mom and Dad were board members for a while, and even opened up their own chapter, the Heart of Dixie Model T Ford Club.

Every year, the MTFCI had a grand, week-long tour and road rally.  Which meant that you trailered your vehicle to that year’s location (the real Hard-Cores drove their vehicle across country to get there), you drove it around all week on rallies, scavenger hunts, and tours of locales and museums that only an octogenarian could appreciate, and you in general talked old cars, more old cars, and nothing but old cars. 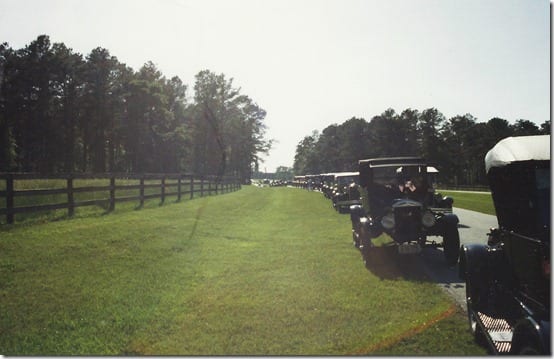 Which meant that I was bored a lot. 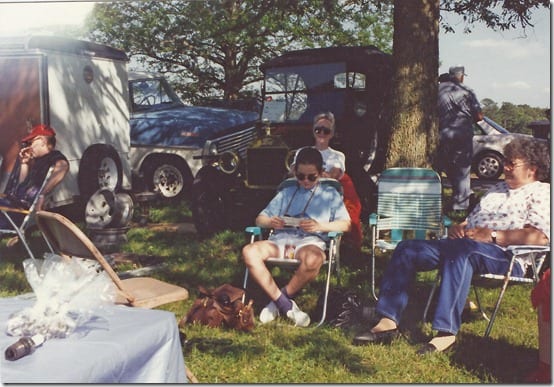 My Kelly McGillis Top Gun Sunglasses made it all better, though.

This opportunity afforded me the opportunity to travel through 30 states and Canada and rack up the collection of many pen pals. 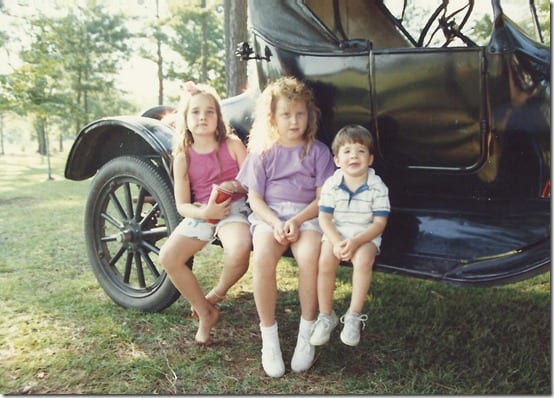 Me, a Model T Tour friend, and my little brother Nick.

(What’s a pen pal? Well, that’s what we used to have to do before Facebook.  When you met someone out of state, you had to actually write them real letters – on real paper – and use a real stamp to mail it – and wait days or even a week for a response.)

We drove hundreds of miles in our Model T on those tours…it was bumpy, loud, windy, and quite comfortable. 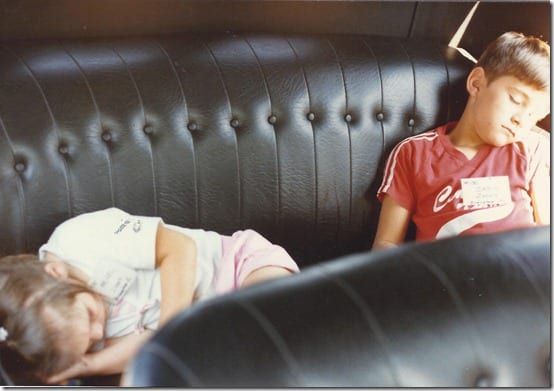 Clearly, there was no LATCH system for the installation of car seats.

On these annual tours, we spent five days each in the following places: 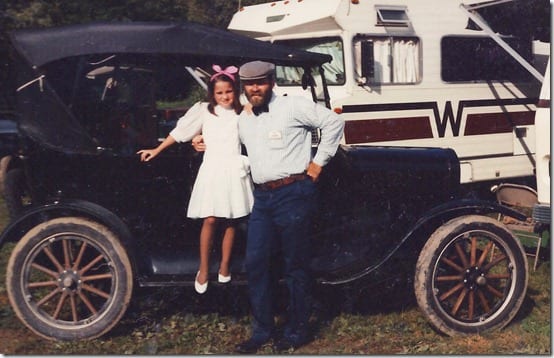 My Dad and I in Canada.  Those aren’t bunny ears, it was a bandanna hair band.  Tied awkwardly at the top.  Mom wasn’t there, what can I say?

But the 1992 Iowa trip was definitively the end of an era.

It’s a two day drive to Iowa from Alabama.  So we set off in Dad’s ancient truck (two doors, no backseat, family of five – fun, no?) trailering the Model T.  Back then, kids could ride in the back of pickup trucks if you had a camper shell (or at least that’s what my parents told us), so we spent the two days sliding around the bed of the truck, trying to read books and do crafts and keep from mind-numbing boredom.

On the way up there, the truck blew a tire.  Dad fixed it and we continued on.

When we arrived, the plan was to camp on the hotel’s generous lawns with the rest of the tent campers.

But after the first night, the Hotel decided that we were tarnishing their lofty image, so they asked us to leave.

So we set off in search of a campground.

Then the Model T broke – like, BROKE broke – on our second day.

Which means that we got to drive the hundreds of miles of touring that was supposed to take place in the Antique car – in the truck, instead.

Because us kids just hadn’t had enough of the truck on the way up there.

We found a campground, along with the other tour campers, and we all set up for the night.  That night, there was an unbelievable wind and thunderstorm, tossing tents like tumbleweeds, and leaving those of us with our tents still in place sleeping in a foot of water.

So the next day, instead of fun tour stuff (in the truck), we headed to the Laundromat to dry all of our belongings.

At which time Mom set the dryer too high and melted my sleeping bag, giving it wormholes all over the inside that were surrounded by itchy, hard plastic.

We met a Pastor/Farmer’s wife at the Laundromat who offered to let us camp out in their barn, as it was supposed to rain all night long.

So naturally, we set off to the stranger’s house.

Our tent had been destroyed by the rain storm, so we planned on camping out on the floor of the barn.

And of course, their barn was full of my biggest nightmare, giant cockroaches.

So I spent all night long in my itchy plastic sleeping bag frantically scanning the floor around me.

(Full Disclosure: My Mom says there were no cockroaches – that only us southern states are blessed with such things.  She says that I must have just been afraid that there would be cockroaches.  However, I distinctly remember cockroaches on those barn floors mere inches from my face.  I will leave you to your discernment to choose who to believe.)

On the last night of the tour, we were supposed to get taken home to dinner by a local family.  I was personally looking very forward to being in a nice, warm cozy house.

Each family found their pre-assigned match and headed off, one by one.  Then there were five families left, then four, then three, then two, then just us…

Because our family apparently got their times mixed up and never showed up.

Finally, it was blessedly time to go home.

Here we are, in front of the Cockroach Barn and the trailered, broken Model T, Mom and Dad totally faking smiles about the whole situation, and I’m holding my favorite part of the trip, a four week old Bunny, Jasmine (who turned out to be a boy), that I bought for $5 from the Pastor/Farmer and his Wife. 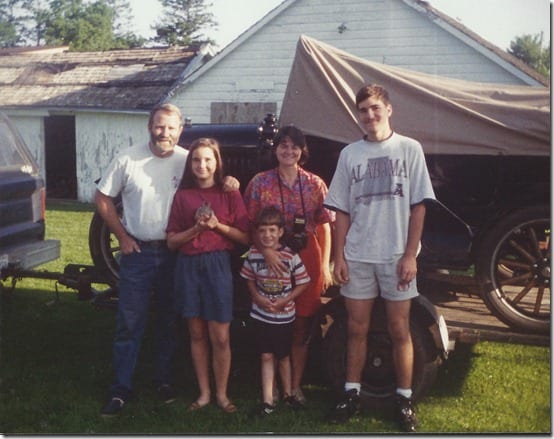 (As an aside, Jasmine is the same bunny that had the intense pleasure of meeting my formerly blogged about Rabbit From Hell.  It was actually quite lucky for Jasmine that he didn’t turn out to be a girl.) 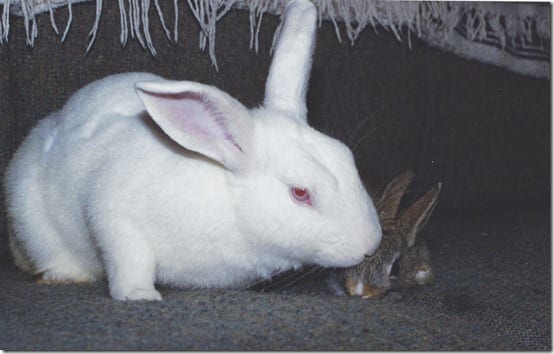 So we piled up in the truck, anticipating two days of sliding around the truck bed and trying not to squish a baby bunny, which was far better than sleeping in Cockroach Barn.

Until somewhere around Nowhere, Kentucky.

The axle on the trailer split in half.

Us three kids peeked out the window of the camper shell, watching and listening with both horror and fascination as my Dad totally and completely lost it.

In retrospect, I admire his ability to hold out for so long – I think day two would have had me flying back home.

But Dad – he stuck it out.  And although we didn’t go on another tour ever again, he has kept the family tradition alive. 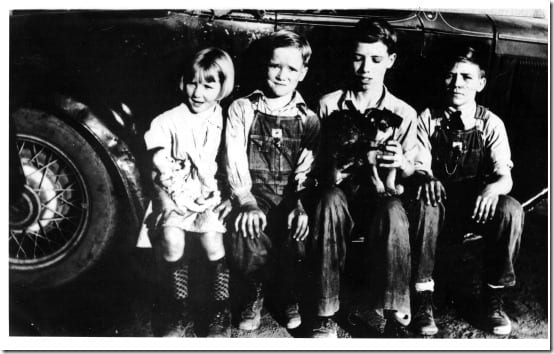 My Grandmother and her siblings, circa 1935 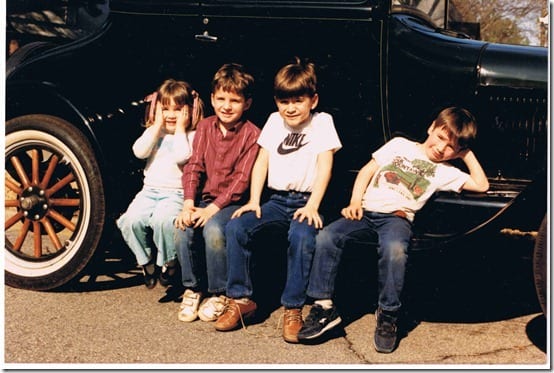 Me, my cousin Scott, my brother JC, and my cousin Nathan, circa 1986 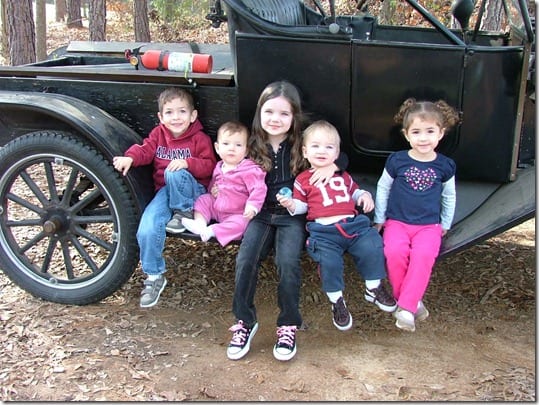