Last weekend, I stepped out of my comfort zone (which is right here behind this computer screen) and attended the Atlanta Food and Wine Festival.

Without knowing a single soul that would be there.

A bit intimidating, but also exciting.

But the minute I stepped into the first event, I knew that I was THE least educated person in the room.

Don’t get me wrong – I feel that I am a decent cook, and am also fairly knowledgeable about the wonderful places to get great food out in Birmingham.  However, I am not what you would call a “fine diner”.  When I see a menu that starts listing a dozen mysterious things that the food is braised, infused, rendered, and tempered with, I get scared and order the Tilapia.

So yes, the curators of the event might at this moment be second guessing themselves for inviting me, but it’s too late now!

For our welcome to the conference, we had an unbelievable spread of antipasto (is that the word?) and artisanal cheeses. 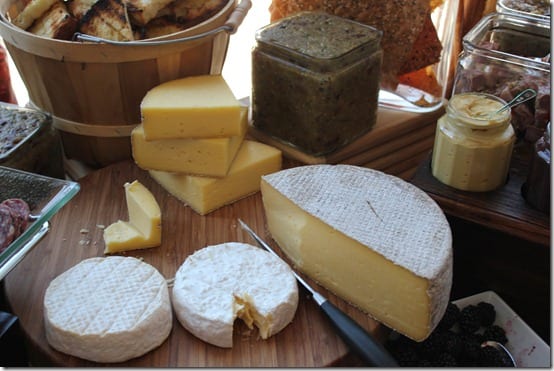 I was all nervous and dropped a blueberry, but managed to get a few things onto my plate successfully.

And, upon my first bite of cheese, I was questioning my entire eating lifetime up to this point.

And I knew then: This conference was not going to leave me the same.  I was either going to become (or aspire to become) a total Foodie of Anthony Bourdain proportions, or I was going to feel unworthy to ever partake of food again.

But back to this amazing cheese.

I think it might have been Brie (I do like Brie) but I really have no idea, and I certainly wasn’t going to ask anyone and get definitively labeled as The Conference Idiot first thing in the morning.

So.  If any of you more-foodie-than-I people out there can identify this cheese, 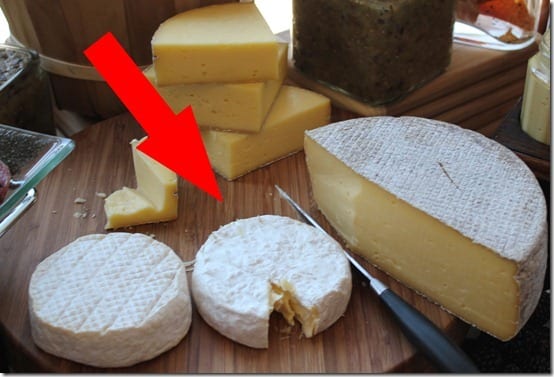 then you might be responsible for some extreme weight gain in my future.

As I was eating, servers were walking around with other treats.  Most noticeably (at least to me), these ice cream sticks: 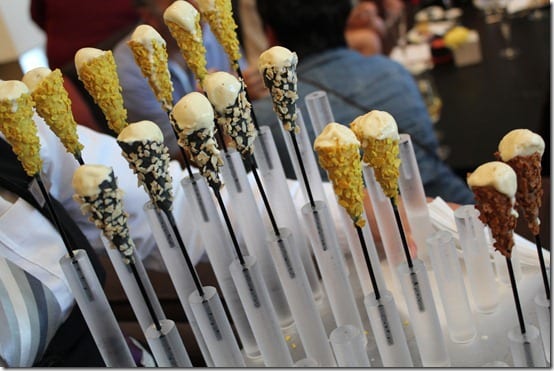 And then I realized that I’d just let onto my Foodie Idiocy, but hoped she would think that mine was different than hers and really was just ice cream.

Until another person walked up, got the exact one that I had tried, and said, “Oh! I think this is Bleu Cheese!!”

I quickly slunk away before I could embarrass myself further.

The Festival is broken into several different elements: learning sessions, the tasting tents, and dinners and special events.

(Perhaps BlogHer should consider incorporating this?)

I was excited about the first learning session I chose, because not only was it focused on Greek Dining, but it was curated by my favorite Atlanta restaurant, Kyma.

We learned about Greek Food, Wine, Geography, History, and techniques while we ate these amazing platters..

Creamy Eggplant Caviar, Raw Ahi Tuna, and a Tomato Chip on top, made out of tomatoes from Santorini, Greece. 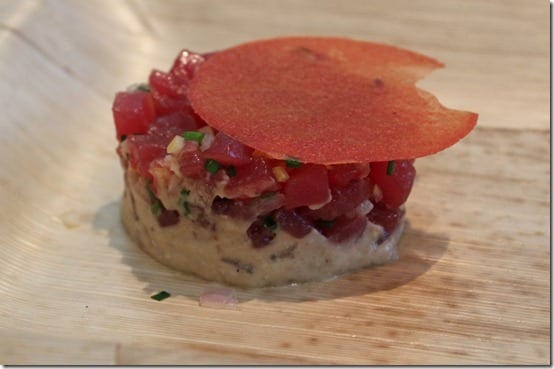 Lamb Shank with Trahana Pasta (Pasta made with sour yogurt and flour) and Fennel made five different ways, 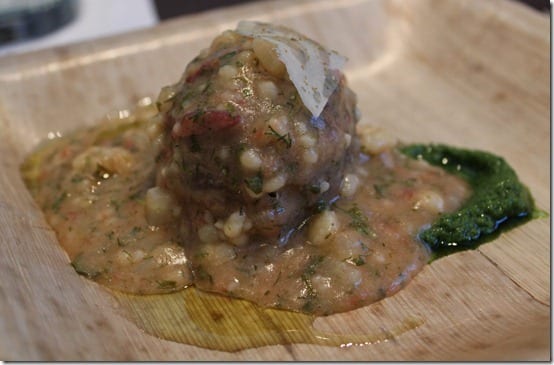 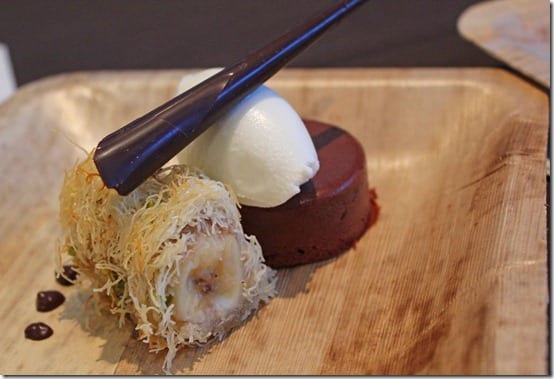 All three of these dishes competed as the best food that I ate all weekend.  They were stunning.

They also taught us all about Greek Wines, but as little as I know about food, I know exponentially less about wine.

He started out with “About these wines, I’m not going to be all heady and intellectual.  I’m going to be basic.  So….”

And that’s all I understood of the entire speech.

Later that afternoon, I checked out the tasting tents.  They contained endless rows of different Tasting Trails, which allowed us to sample how each southern region does a type of cuisine. 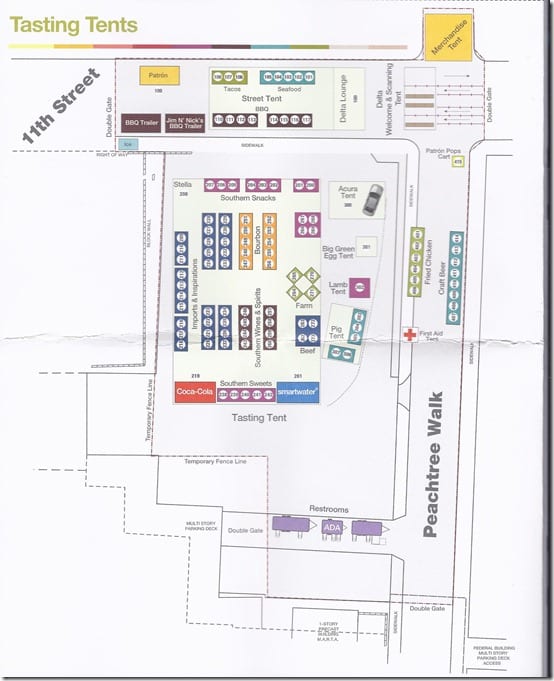 Dozens of amazing dishes were available for the taking.

On the Bar-B-Q trail, I preferred my hometown favorites, Jim N Nick’s, who were serving their Bar-B-Q Pork Taco. 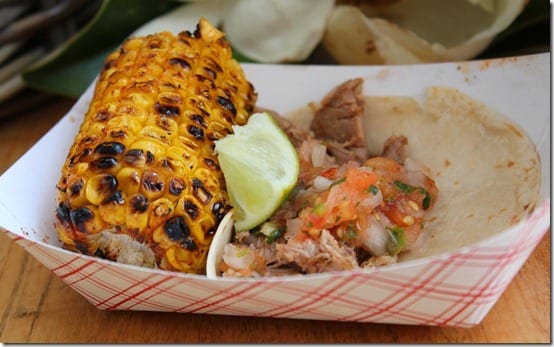 (I wrote more about Jim N Nick’s and what they are doing to revitalize the Southern Hog Farming Industry on Alabama Bloggers.  I promise – it’s fascinating.)

On the Southern Snacks trail, I fell in love with the idea of Pimento Cheese Stuffed Eggs by The Hungry Peach. 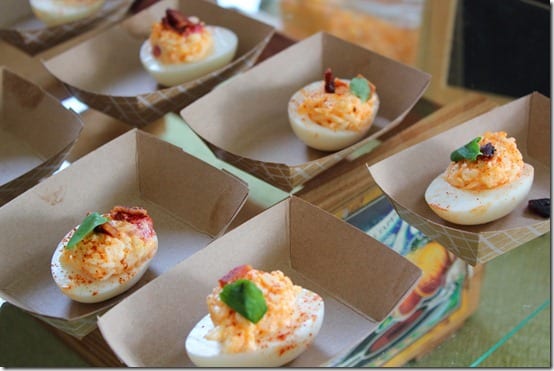 Brilliant, no??  I will be stealing this idea for our next family get together. 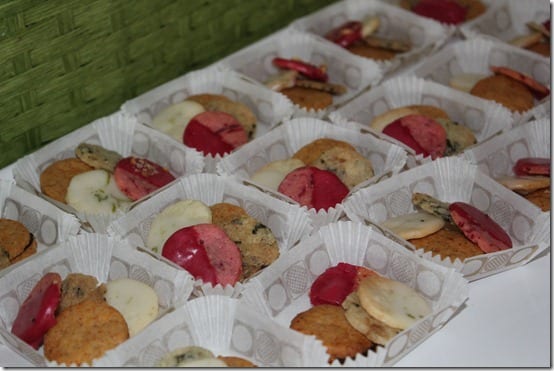 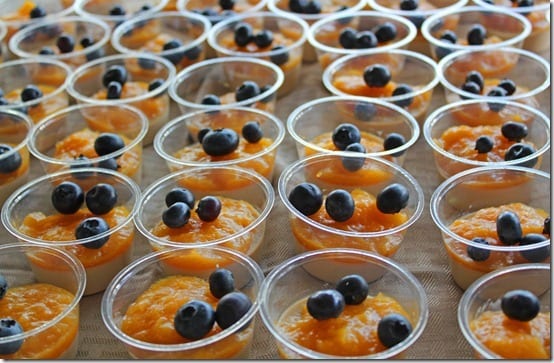 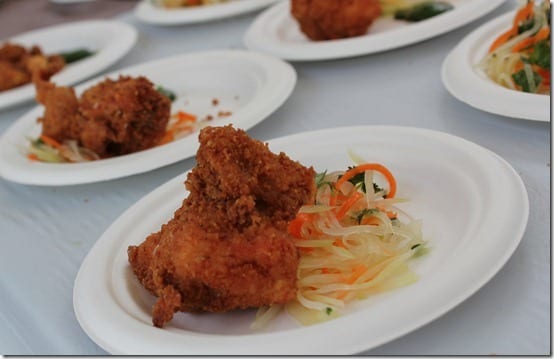 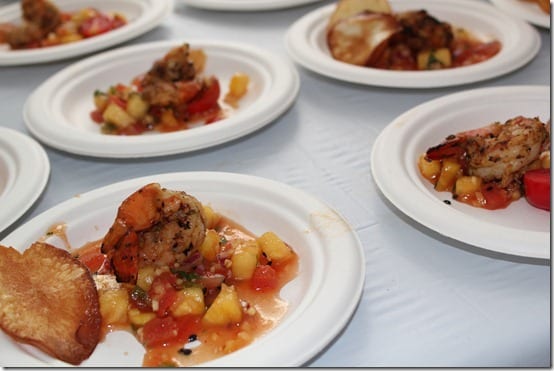 (It was on the seafood trail, though, that I definitively decided to never eat mussels ever again.)

For dinner, I was thrilled to get to eat more food from Kyma.

I think I counted eleven courses in all.

Which means that I was there from 8:15 to nearly midnight.

Attempting to converse with strangers.

And I realized something about myself: I’m not one of those bloggers that is so excited for everyone to know I’m a blogger and shoving business cards as fast as I can.

In fact, I think I need a fake business card.  Because once I give you my business card, it kinda precludes my ability to blog about you, right?

Also, it seems that conference attendees are naturally wary of bloggers, as if they know that we want to blog about them.  One girl in particular wrote down my blog information with a very accusatory arch to her eyebrow, as if to say, “just in case you get any ideas…”

But luckily, I sat with two charming couples, one with which I had a lot in common (geekiness especially), and the other of which kept us laughing all night long.

But both couples understood the plight of the blogger.  In fact, Geeky Husband begged me to blog about him – even if it was horrible and awful and embarrassing – just so that he could say he’d been blogged about.

As for the rest of the guests… well, I’ll try to get those fake business cards before my next conference.

Back to our meal.

The lighting was rather challenging for my poor camera skills, but I did manage to snag a couple of pictures.

One of our appetizers was Chris’ favorite Greek Dish, Saganaki (for which I gave you our recipe not long ago), topped with wild mushrooms and my first ever taste of Foie Gras. 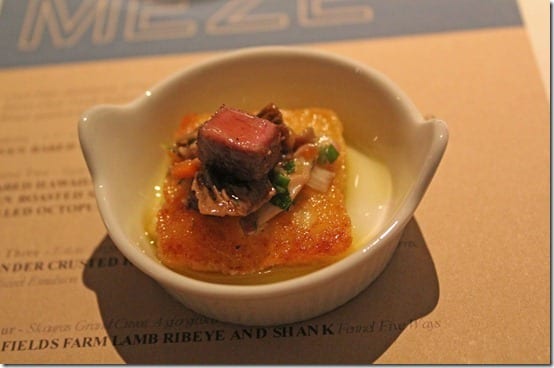 …so now watching Anthony Bourdain should make so much more sense.

And I broke my cardinal No-Oyster-Ever-Again rule because – hey – it was covered in Avgolemono and Caviar! It has to be good, right? 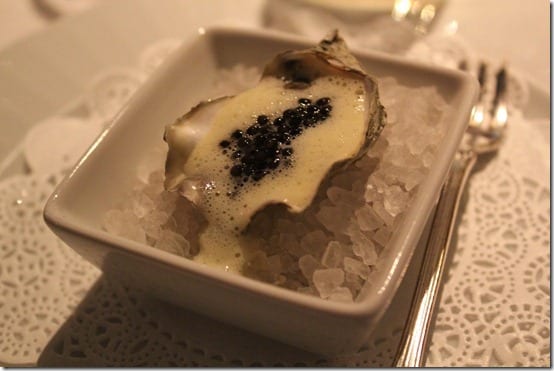 The Avgolemono and Caviar were divine.

However, I am back to being a No-Oyster-Ever-Again type of girl.

The Octopus, however, was phenomenal. 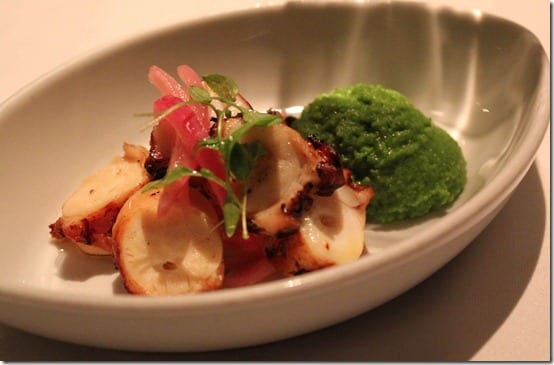 Yes, people.  Eat Octopus – you will be glad you did.

The next day, I excitedly went to a cheese session, hoping to rediscover my first bite of the conference. 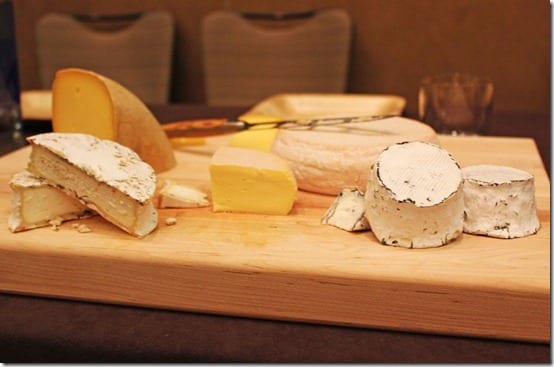 But, although these cheeses were quite tasty, they were not the elusive cheese I was looking for.

(Feel free to step in and tell me the name of my mystery cheese.  I know that one of you is foodie enough out there to identify it on sight.  Right??)

I had an amazing two days, learned a lot, embarrassed myself a little, and ate some dang good food.

Am I now a foodie?

I’m pretty sure that foodies everywhere would be horrified if I categorized myself as one of them.

But my eyes have been opened to the fact that, perhaps, when the menus get a little complicated, I should dive in, rather than just ordering the Tilapia.

34 thoughts on “A Foodie Conference, From the Non-Foodie.”