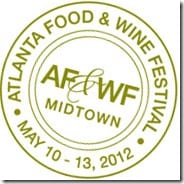 Oftentimes, the South gets a bad rap from other parts of the nation.  And, although we do like getting the respect that we deserve, sometimes we don’t mind living in a well-kept secret of beautiful forests, striking mountains (Yes! We have mountains!), the best beaches in the world, and the most friendly, welcoming people you’ll ever encounter.

However, one secret that we haven’t kept so well is our food.  Because something that amazing just can’t be hidden.

Barbeque, grits, southern seafood, fried okra, chicken and dumplings, cobbler, banana pudding… the list is endless, and should be making you hungry about now.  Southern food is comforting, friendly, and absolutely deserving to be celebrated.

And in less than a month, celebrations will occur!

The second annual Atlanta Food & Wine Festival will be a four-day extravaganza of southern food immersion.

Although “Atlanta” is in the name, it’s only the location: the founders, Elizabeth Feichter and Dominique Love, are committed to ensuring that every part of the south is equally represented and celebrated.  They have an all-star Advisory Council of 70 highly celebrated chefs (all of which have been recognized with major national culinary honors) that hail from fifteen states.

The Advisory Council is deeply involved in every aspect of planning the event, so they have combined their expertise with everything they learned at last year’s event to create an even more unforgettable southern culinary experience.

The three focus areas of the festival will be Old Traditions (soul food, barbecue, Cajun and Creole, etc.), New Traditions (the fusing of Southern food with Asian, Greek, French, Latin, etc.), and Imports and Inspirations (“Other Southern” – food from other southern regions around the world, including Southern Europe, South Africa, South America, etc.).

The event has many different aspects for all levels of foodies and enthusiasts, including:

Tasting Tents – There will be fifteen different food trails, which highlight all of the different flavors of a particular food.  Some of these trails include fried chicken, barbeque, seafood, southern snacks, and southern sweets.

Seminars, Demonstrations, and Panel Discussions – During each time slot, they have many different options for the foodie who wants to learn.  Some of these sessions include Cast Iron Cooking, Techniques for Biscuits, Grits, and Cornbread, Southern Cakes and Pies, World Class Coffee at Home, and Southern Chemistry.

Dinners – During the evening  hours, local chefs will host out-of-town chefs for a series of special dinners, parties and southern-style soirees.  One such event will be a “Pig-Out, Southern-Style”, where the 70 chefs of the Advisory Council will be hosting and not cooking, which means that they will be interacting with the guests and helping to create the epitome of a foodie atmosphere.  There are dozens of these amazing dinners that can be bought in a weekend package or à la carte.

They have a wide range of participation options, including day passes, three-day passes, tasting tent passes, dinners and events, and the ultimate VIP Connoisseur experience.

And if you would like to experience this for yourself, I have a pair of Day Passes for Sunday, May 13 to give away to a lucky winner!

If you would love to attend Atlanta Food & Wine Festival, simply comment on this post and tell me your favorite southern delicacy.

You can earn up to three additional entries by:

This giveaway is only open until Midnight, Monday, April 23. The winner will be randomly selected and notified by email and posted on my giveaway winners page on Tuesday, April 24.

Best of luck, and I hope to see you there!!

Disclosure: I was not compensated in any way to write this post. My opinions are always my own.