My Dad is an artist. 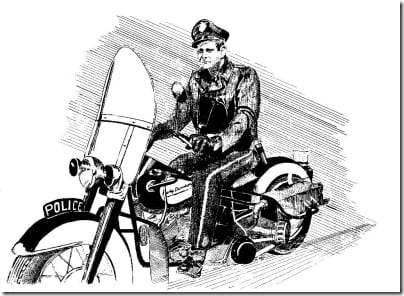 (What he is not, for the record, is an Excel Pro.  At least I have something to offer him.)

(“By right clicking.  Then choose the “delete” option.”)

And although he didn’t attempt to teach me all of his talents (I’m so not fond of chickens while they’re still alive and pecking), he did make some valiant efforts to teach me how to draw.

“You have to look at the world with different eyes – you have to see the lines and shapes with which things are comprised, and then draw those.”

I squinted as if I were looking at a Magic Eye poster.

I turned my head upside down to see if that helped.

But alas – I did not inherit his second set of eyes.

Yet, despite my complete artistic blindness, I have allowed myself to get sucked into the iPhone sensation, Draw Something.

Enter an avalanche of shame and embarrassment into my life.

And, since my heinous crimes against art have been laid bare for all to see on other blogs, I suppose I might as well own my shame here, as well.

If my Dad played Draw Something, even his most simple doodle would have merit enough to be placed in the Art of Draw Something Masterpiece Collection.

Mine, however, deserve an entirely different type of internet fascination.

For instance.  I learned from other Draw Somethingers that when you need to draw something white, it’s good to use a different colored background. 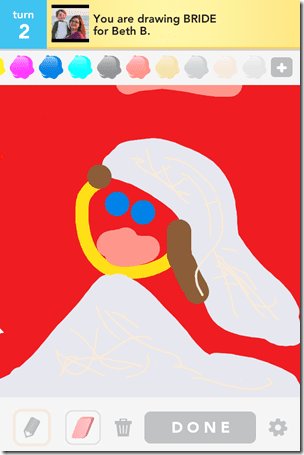 However, a red background might not quite catch the aura of joy that goes with a wedding celebration.

Especially when you leave the bride’s face all bloody.

Speaking of red, when drawing the world’s most tragic sinking, perhaps you shouldn’t draw the characters in that color? 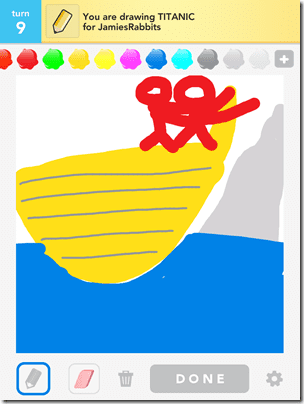 Fortunately, every now and then I get assigned a word that’s not too difficult for me to translate into art, despite my Paleolithic abilities. 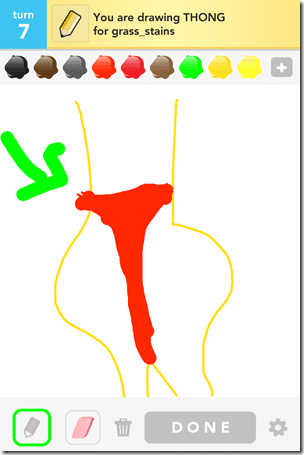 Then again, my opponents may not appreciate the unannounced queasy effect that my drawings can have on them. 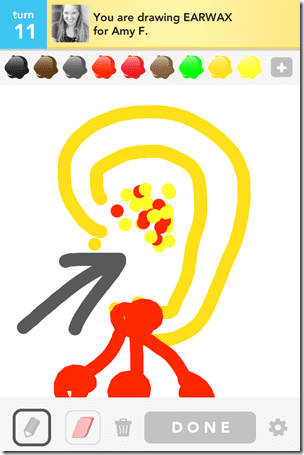 I’ve also found that Spinach is extraordinarily hard to draw.  And when you try to draw a cartoon character to explain your drawing of said vegetable, it only gets worse. 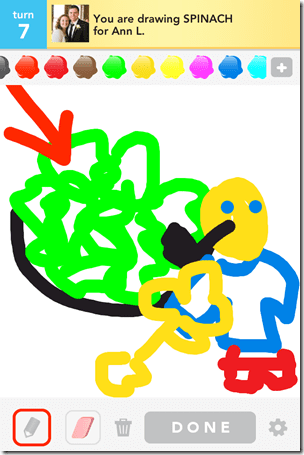 And that’s the thing with Draw Something – once you’ve started a nightmarishly awful drawing, you might as well commit to it.

For instance, when I tried to draw Heidi Klum.  And her ex-husband, Seal.

I was nearly crying with shame, on so many levels, by the time I finished it.

The more I drew, the more I fought the urge to gouge my own eyes out with my drawing finger.

Right before I forced myself to give up due to my crimes against drawmanity, I realized that using Ali’s iPad was a much easier way to play, and I began to show slight improvements.  For instance, this homage to C.S. Lewis: 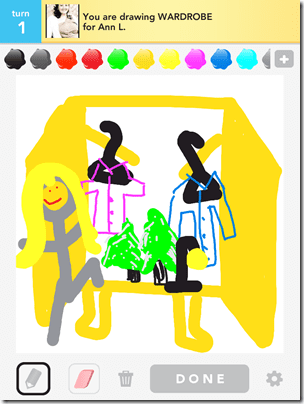 Okay, “slight” was the key word there.

But I did learn some tricks.

I learned how to draw compound words, 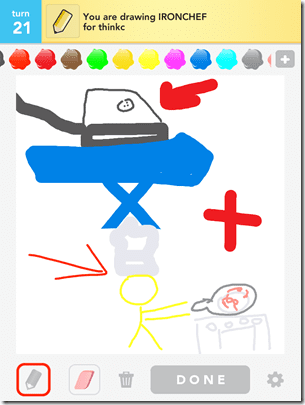 meat in tube form shoved on a stick, 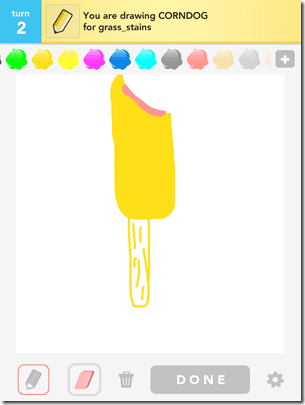 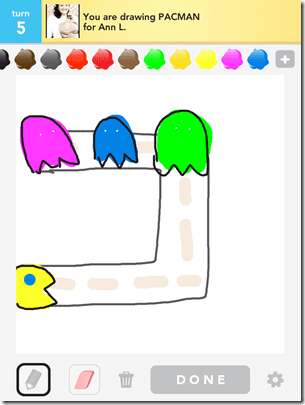 and I discovered that my true forte – where I could really shine – was the violent and morbid. 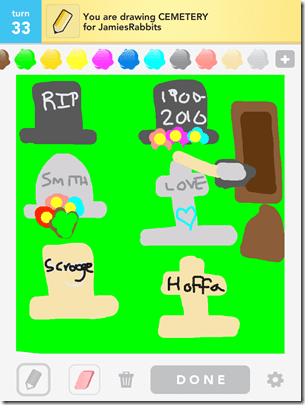 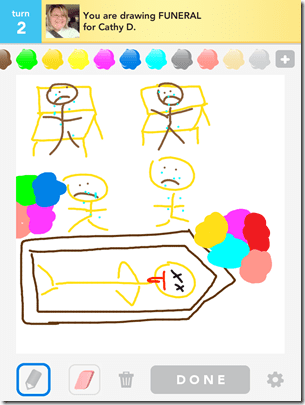 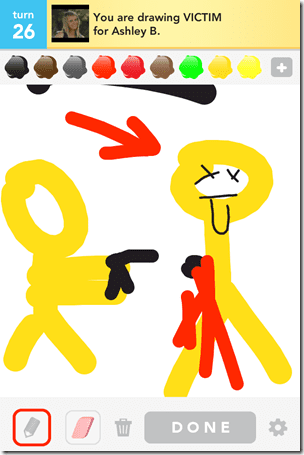 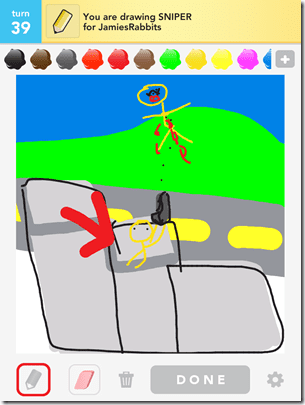 So now that you’ve adjusted your expectations to my skill level, I feel that it is only fair to show you how normal people play this game.

My friend Cara, for instance.  She could have just drawn a stick figure with a dress on, but NO.  She drew this. 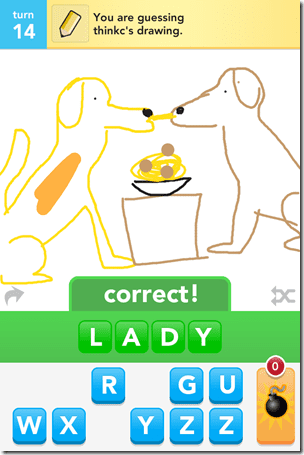 Her sole purpose, most likely, was to open my eyes to my own unworthiness to play with her.

Lianne did a convincing portrait of Trump, mastering his hair in a very special way, 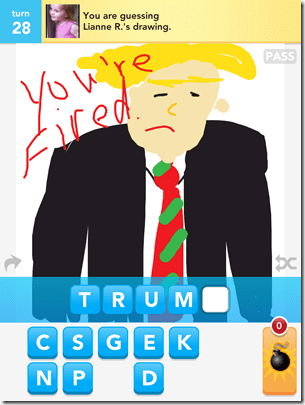 and then there’s Jamie. Even though she ridiculed me (albeit an honestly earned shaming), I will be the bigger person and share some of the masterpieces that she so graciously bestowed upon me. 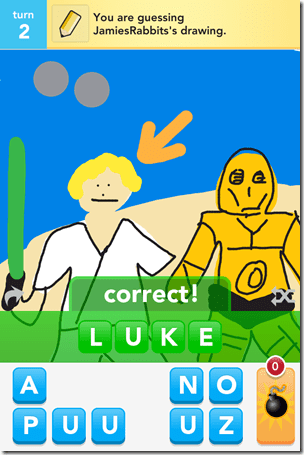 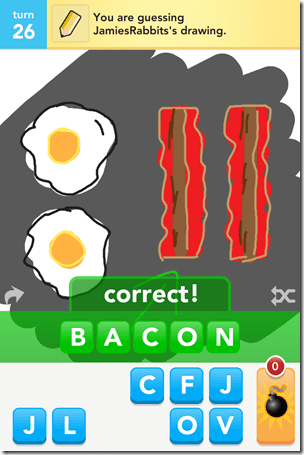 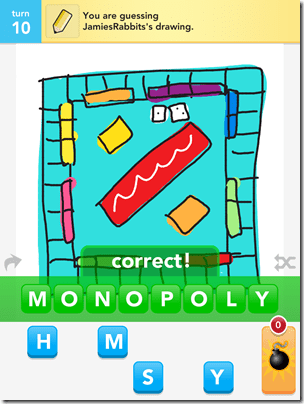 All of those drawings occurred before she fully realized how shockingly horrible I was, at which time she deemed me only worthy of stick figures thereafter.

But it’s okay, because I acknowledge my deserving of such treatment.

Just call me the Oozing Scabies of The Art World. 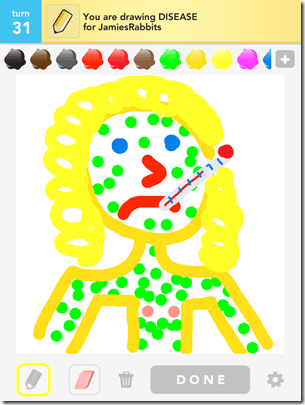 30 thoughts on “The Artistic Train Wreck.”