If I were to have a doctor’s excuse for today, it would go something like this…

“Rachel is unable to attend her blog today due to a sick and needy baby, a persistently virusey computer, an all-consuming car search, a late-working husband, a severe lack of sleep, and PTSS from last weekend’s potential tornado event.”

So.  I’m sure you’re just dying for a more in-depth explanation.

Oh.  Well move along, nothing to see here.

(Did everybody leave? Okay.  I shall now continue.)

Noah has his first ear infection, which was quite a shock, since I am continually taking my kids to the doctor thinking that they have ear infections, only to hear…

Except for this time.  He got the good stuff – as Ali calls it, the “Cold Pink Medicine”.

Speaking of viruses and my hatred of their untreatableness…

I got a new computer back in the fall – a fresh start after a couple of years of being plagued with viruses.  It seems to me that once a computer has contracted one, it never fully recovers.

Which is, incidentally, the same effect that drinking spoiled chocolate milk has on me.

Anyway.  My new, unspoiled, Virus Virgin of a computer is no longer.  It caught a nasty case of Alureon last weekend, and I spent all of Sunday night and Monday afternoon trying my best to rid it, with little help and lots of wasted time provided by the HP Care Contract that I had acquired upon purchase.

(After hours of technical support Sunday night by Mirijawal, all while assuring me that she would completely fix my computer and rid me of any and all viruses, I was informed by Sanjedwahahaha on Monday that virus fixes weren’t covered in my support agreement.)

(Which is all find and dandy and I wouldn’t have been the least bit upset about – if Mirijawal had simply informed me of that Sunday night instead of spending two hours cheerily showing me how to delete my temporary internet files and cookies while I persistently kept veering her back to the task at hand, which was ANNIHILATING ALUREON.)

So I finally did my own Internet research and figured out how to fix it like a big girl.

That’s right.  I killed Alureon.  And I’m proud of it.

On to more exciting pieces of my boring news – my car search.

I have finally completely and hopelessly fallen in love with the exact transportation vehicle I am going to get, after many, many iterations of test drives and vehicular crushes.

I’ll give you a hint: I’m back to my first love.

All I’m gonna say for now is: It was MADE for the SuperGeek Mommy Blogger.

However, actually finding the exact used one that I want is nearly impossible, since everyone hates them except me.

(Which is a real shame, since they’re AWESOME.  You just wait until I tell you about all of it’s superpowers.  It rivals minivan superpowers like Dr. Otto Octavius rivals Spidey.)

But besides all of that, the last two weeks have been killer around here, what with Chris’ work being crazy and us staying up too late to get some time together and in general the chaos of life accosting us at every opportunity.

And then there was last week’s Tornado Event.  Thankfully, it didn’t hit Alabama too much (although I am quite distressed on behalf of the states it did hit), but we were in the scary red zone, and were warned for days that it was going to be terrible.

The anticipation was worse than usual because we had non-refundable tickets to go see Wicked, which meant that we were sending the kids to spend the night at the grandparent’s.

So here we were, holding expensive pieces of paper, in desperate need of a relaxing date, finding ourselves even more stressed out about the potential weather and being away from our kids during said weather.

(Although Wicked was good.)

(And my parents taught Noah to walk.)

(And we got to meet up with a few amazing bloggers also in attendance, Jamie and Kevin and Amanda.)

(And we discovered this epic sign in the parking deck, which almost made it all worth it.) 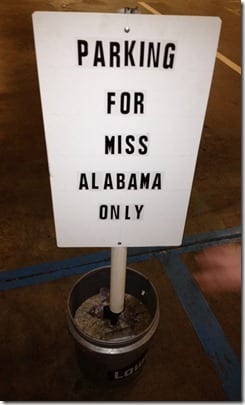 I hope that concrete-filled Lowe’s bucket that somebody used to discard their cigarette butt feels like her pageant dreams come true.

Okay.  So that was a fascinating brain dump.

Sorry.  I should have just stuck with my blogger’s excuse.

13 thoughts on “The Fortnight, in Review.”