You know how when you first walk into the Monkey House at the Zoo, you say “Oh, it smells TERRIBLE in here!!”, then you stay a little longer, and say “Well, it’s not so bad…”, and by the time you leave, you can’t smell it at all?

You, my friend, have been living in the Monkey House.

America, we are living in the Monkey House.

We have left behind the girth of our moral standards, and have immersed ourselves in a sea of gigantic, cheap, lazy fleece.

It all started with The Snuggie.

Remember when it came out?

We all laughed, gave them as gag gifts, and scoffed at the nonexistent person who actually might consider wearing one.

The Snuggie pressed on, marketing itself to the masses in a myriad of (un)attractive prints and team logos.

And then, we caved.

I now actually know normal people that proudly own Snuggies.

We so overwhelmingly sold our souls to the Snuggie that they even began making them for pets. 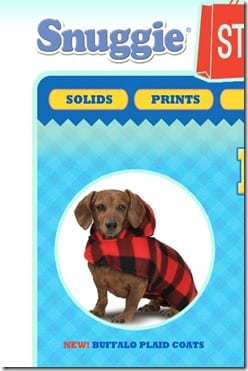 Can you not feel the mortification in that dog’s eyes???

But as bad as the invasion of the Snuggie was (and is), the fact that it mainly stays hidden within our homes does, at least, minimize it’s damage.

But it’s impact on the moral fortitude of America’s fashion is the real issue.

The laziness that is intrinsic in “A Blanket that gives you full use of your arms!!” paved the road for the introduction of Pajama Jeans – a product that would have been scoffed and scorned and maligned in the Old World.

But in the new, Snuggie-Accepting world, they have sadly been welcomed with open arms.

Even – and this is where it gets bad – in normal, out-of-the-house use.

Now granted, The Snuggie wasn’t the only thing that led to this atrocity.  I blame People of Walmart for this cultural degradation as well.  Because previously, when people began to wear something out that had “pajama” in the title, they would hear Stacy and Clinton on their shoulder saying “NEVER wear pajamas out of the house!!”.  But now, people simply justify their actions by telling their Stacy and Clintons, “Well I STILL look better than anyone ever featured on People of Walmart!”

Back to Pajama Jeans.

At this juncture, some of you may be feeling a bit defensive.

So I shall take a moment to elaborate.

First of all, the price. 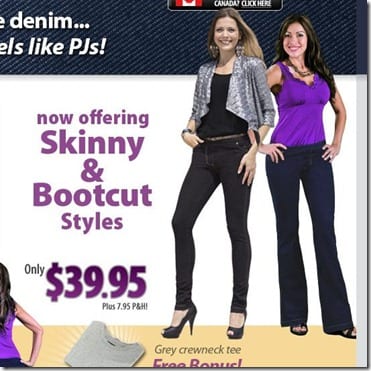 I PROMISE you that you can easily find a pair of real jeans that do what real jeans are supposed to do AND that are extremely comfortable for less than $47.90.

Nearly fifty bucks, and these “jeans” don’t even flatter the models.

See that bunching?  The bulging?  That awkwardly snug crotch?

And finally, the rear view. 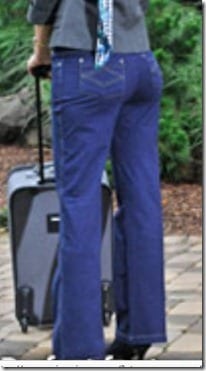 Clearly you can see that the curvature of the butt ends below the pocket, concisely defining these as Mom Jeans.

Pajama Jeans are not even the worst atrocity of our generation of loungewear.  They just further paved the way for The King of Fashion Death… 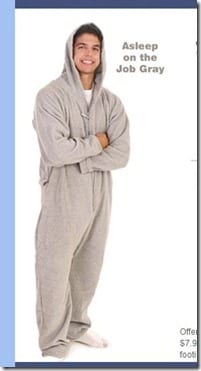 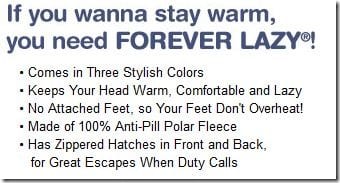 Now, if they were marketing this bodysuit of awfulness as gag gift sleepwear, that would be one thing. 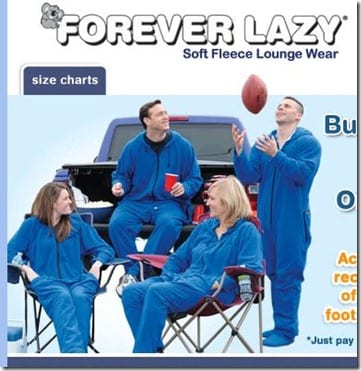 And, speaking of tailgating, it comes with it’s own handy one: 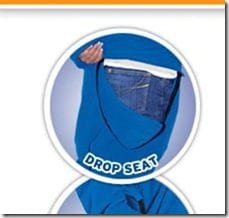 … because who wants their entire fleece onesie to be dragging on the bottom of the tailgating port-o-potty??

And of course it comes in the stylish, albeit ironically named, Hanky Pinky Fuchsia. 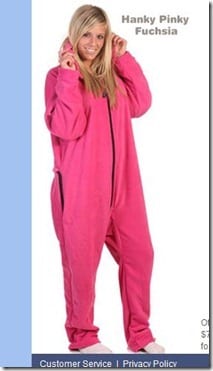 (I bet that model was thrilled the day she got the callback for that gig.)

Hurry, America.  Don’t walk, but run out of the Monkey House before it’s too late.

Otherwise, don’t blame me when the guests show up at your funeral dressed in nothing but an ugly, leopard-print blanket.

36 thoughts on “A Dissolution of Moral Fibers.”