Thank you all for your concerned tweets, comments, emails, and Facebook messages yesterday.

Living in Alabama, as much as I adore it otherwise, is beginning to feel like a nasty game of Tornado Roulette.

Just the mention of tornadoes has a vastly different impact on me (and most likely the rest of the state) than it did before last April. Combine that anxiety with knowing an entire day beforehand that a potentially severe tornado outbreak is coming in the middle of the night, and it becomes nearly beyond bearable.

They began talking Sunday morning about what was to come between midnight and 6 AM. We were driving back from Atlanta, and we began to dread the night.

I laid in bed for hours Sunday night, wide awake, mind racing about a dozen different things, but with an ever-present anxiety over what could happen in the coming hours.

I finally fell asleep somewhere after 1 AM.

Chris started watching the satellite radar on his phone. Being that I had only been asleep for two hours, I somehow stayed in that bizarre state of not-awake-but-not-asleep, even though it seemed like they had set the sirens to some sort of tortuous yet merciful continuous repeat cycle.

Chris stayed awake for two hours, eyes glued to his iPhone screen. Our weather radio app has street-level drill down capabilities, so he was able to watch in detail as the EF-3 tornado progressed through the county.

Knowing that he would wake me if we needed to run to the basement, I somehow managed to keep half-dozing.

As it came toward us, we were within two streets of being included in what is known as The Polygon, which is the area of possible tornado track. Just as Chris was ready to jump up, grab Ali and tell me to grab Noah, the tornado jogged northeast.

He went back to sleep at 5, only to be woken again at 6:30 by his phone ringing. I listened in my grogginess to murmured phone call after phone call.

The tornado had hit the street that his office is on.

The power was out, but the building was okay.

Some of the employees who live closer to the office than we do were trapped in their neighborhoods by debris and trees.

I listened to his end of the calls through my grogginess.

After the kids and I woke up, ate breakfast, and finished our morning routines, I began to look at the local news.

The images … chilled me.

Although I haven’t been able to get out to any of the damaged areas myself, my television screen has been filled with sights like this, 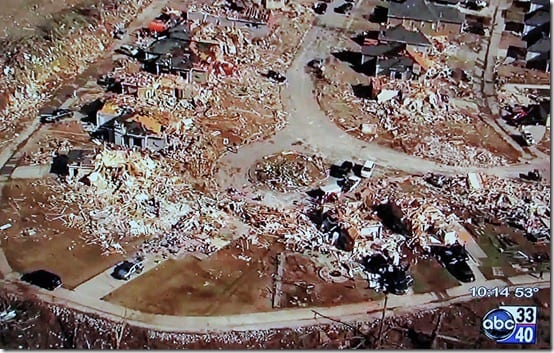 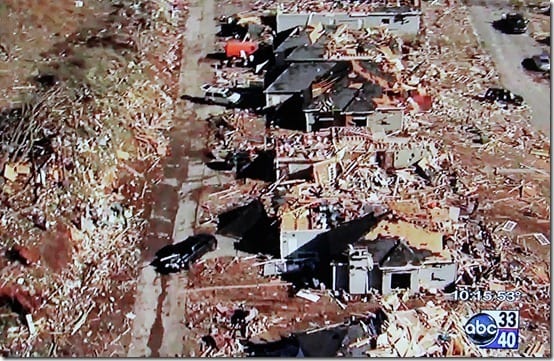 Just like last time, just a mere twenty minutes away from our house.

The stories made me bite my lip to hold back the tears.

…A father and son, yanked out of their house and deposited into the family’s swimming pool – they lived through it. The mother, severely injured but alive, was buried under debris. The sixteen year old daughter, still on her mattress, eyes closed as if still peacefully asleep, was found dead 40 feet away from their house.

The damage was not nearly as widespread as it was nine months ago, but to those hit, it was just as devastating.

So far, three are known to have lost their lives.

Over a hundred were injured.

Countless houses were lost, businesses were destroyed, and neighborhoods were ravaged.

And they are still digging through the debris.

I groaned at the thought of reliving it all over again.

But I was also thankful.

Thankful that it wasn’t as bad as it could have been.

Thankful that so many lives were saved by the plentiful warnings ahead of time.

Thankful that Alabama knows how to handle tornadoes and that so many are already jumping into action.

So very thankful that my family, yet again, was safe.

James Spann captured my feelings best with this fabulous photo. 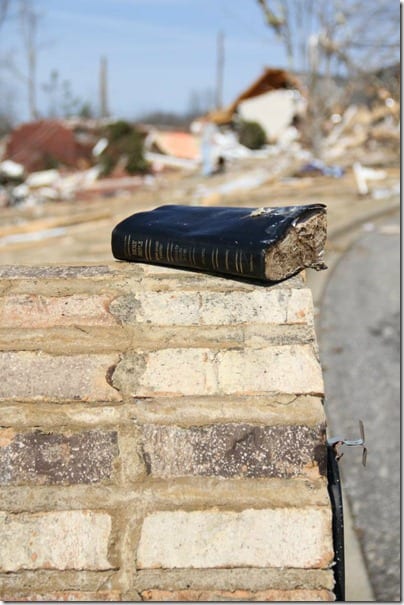 Though the destruction is great, our hope is greater.

For those of you who have asked how you can help, here are a few ways:

1. Keep praying!! Your notes that you were praying for Alabama meant so much.

– Pray that if there are any more survivors in the rubble, they would be found and helped immediately.
– Pray for the families that have lost everything as they try to cope with their new reality.
– Pray for the recovery workers’ strength and safety.

2. The Christian Service Mission has done such an excellent job at providing immediate and practical help to Alabamians in need, so I set up a Causes page to allow anyone to make donations directly to them. They were the backbone of the last tornado relief efforts, and they are already stepping up to do more than their share of recovery again. Since they are locally based and do not have large amounts of overhead, supporting them goes a long way toward helping the community.

Specifically for other Alabamians wanting to help:

1. If you blog about your experience with this week’s or last April’s tornadoes and link it here, the Alabama Disaster Relief Blogging Program will donate $25 to the Christian Service Mission.

2. I’m sure there are many churches offering support and relief, but the one I know of so far is Northpark Baptist Church on Deerfoot Parkway. As of yesterday afternoon, they were in immediate need of Water, Snacks, and Plywood.

3. If you have goods to donate to the Christian Service Mission, they will be accepting them at their downtown warehouse starting tomorrow. You can also like their Facebook Page to keep up to date with their needs.

I will update this list if I hear of other opportunities.

Thank you all for your kindness and support!