Disclaimer: This post is much gooier than usual. In fact, it has a gooiness quotient of 7.65 on a scale of ten where zero is any song from Alanis Morissette’s Jagged Little Pill and ten is Butterfly Kisses. You have been warned.

My friends all told me how unbelievably loving little boys are. Although it seemed a rather generalized statement, I hoped they were right. After all, as thoughtful and kind as Ali is, she would much rather sit and have a logical discussion about the pros and cons of having Teal as one’s fourth favorite color than give me a hug.

And sure enough, my friends were right. 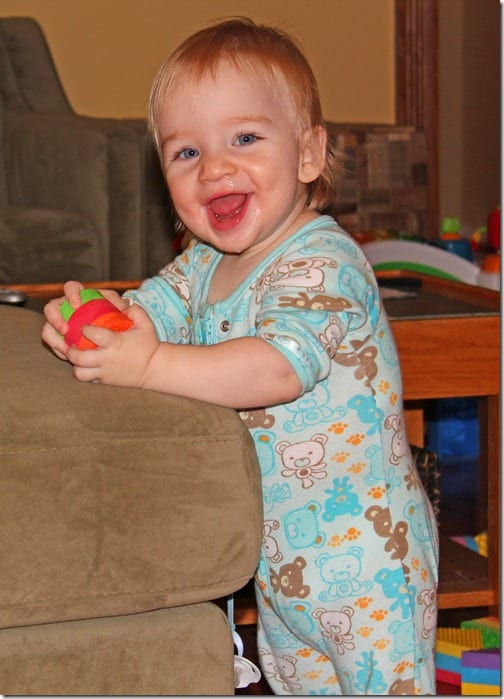 (And Chris and Ali, but I like to pretend that he loves me the best.)

He has gotten sweeter and sweeter by the day. Over the past few months, he’s been randomly crawling up to me and laying his head on my leg, arm, stomach, or whatever he can reach at the time.

But last week, he increased his adorability stock by tenfold.

He always hugs us by laying his head on our shoulder, saying “mmmmmm”, and patting our back or arm with his hand.

So to speed communication along, he invented his own sign language to let us know when that needed to happen.

The definition of this sign is most clearly “I wish I were hugging you right now.” 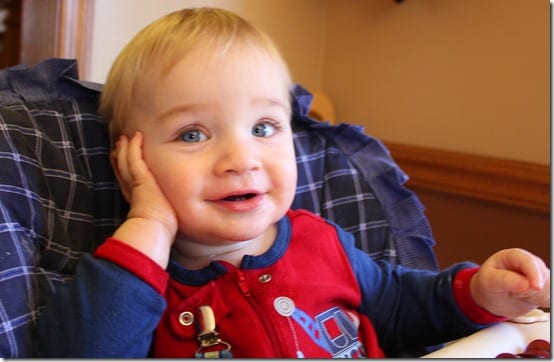 Sweetness Degree 1. If he’s crawling around and all of a sudden realizes that his love tank is running low, he’ll look up at me, put his hand on the side of his face, say “mmmmm”, then crawl as fast as he can to come get his desired hug.

Sweetness Degree 2. If he’s stuck in his high chair or car seat and he wishes he weren’t, he knows how to talk his way out. 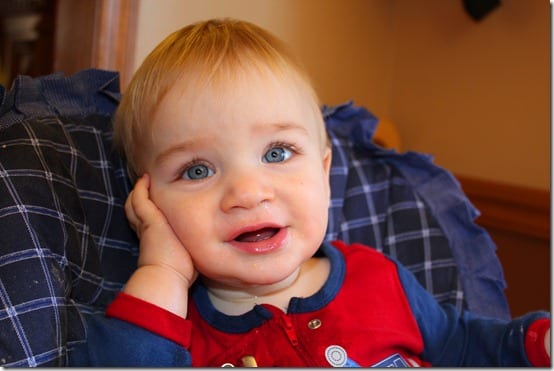 (This particular application causes a severe issue of crunchy/sticky hair glops around his ear.)

And finally, if he’s thinking of someone that he loves that’s not around, he applies…

Sweetness Degree 3. He gets a faraway dreamy look in his eyes and repeats their name while making his sign. 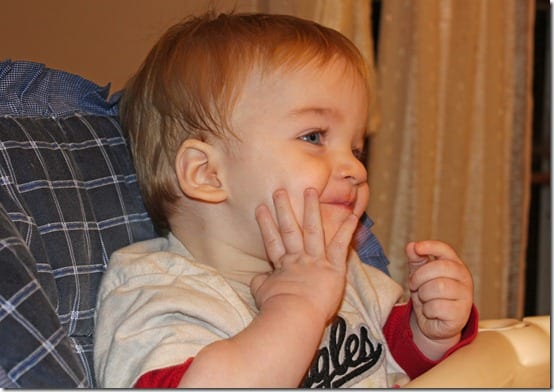 Mental Note: Come back and read this post the next time he decides to scream relentlessly during naptime.