Blissfully drunken with holiday cheer and the much needed four day weekend, Chris and I became horrible parents, of the over-permissive variety.

“Sure honey, you can turn the hardwood stairs into a slip ‘n slide!”

“Why not? Of course you can drive today!”

“Oh, you want to drive like your little brother? Okay, Ali! You can have the next turn!”

We were both so carefree and celebratory that if Ali had asked us for a pink pony with a purple glitter tail and five hooves, we would have probably cheerfully agreed and set out to the nearest Custom Bred Pony Farm to order one.

As proof of our overly-indulgent attitude, here is an outline of Ali’s diet:

Lunch: per request, a “Camping Snack”, which consisted of a mixture of Phineas and Ferb Gummies, M & M’s, peanuts, raisins, and yogurt covered raisins.

Thanksgiving Dinner: I didn’t even try to get Ali to eat a casserole or dressing or any other such goodness that filled our table. I just fixed her a plate full of fruit, turkey and deviled eggs and called it a night.

Lunch: Frozen Yogurt with all the toppings.

(“Mommy, it’s SO fun to eat Banana Pudding for breakfast and ice cream for lunch!!! Why don’t we do this every day?!?”)

Obviously, we are in need of a major intervention.

While the children held their stomachs and moaned, Chris and I spent Friday morning enjoying the delights of Black Friday accounts on Twitter, such as the Great Bedsheet Riot at the Trussville Wal-Mart and the infamous Midnight Tazing at the Florence Wal-Mart: 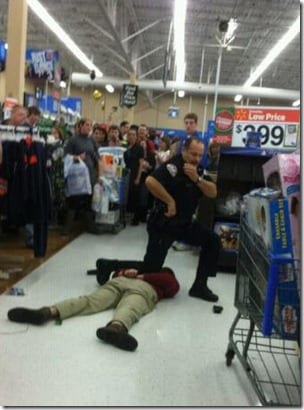 Photo as retweeted by @Spann – I would give original photo credit to whoever was brave enough to BE at the Florence Wal-Mart in the middle of the night, but despite my research, the original documenter seems to have gotten lost in the confusion.

Though we enjoyed a healthy portion of shaking our heads at the madness and declaring that no deal was worth that, a few hours later, in our state of debonair holiday spiritedness, we….went shopping.

With two kids in tow.

With two kids in tow that had eaten nothing but sugary frivolities for two days straight.

We headed out to the Outlet Mall, highly anticipating enjoying the beautiful, sunny day as we meandered down the outdoor aisles. And, much to our delight, there were actually parking spaces available!! And air to breathe!!

It actually wasn’t bad at all, which may be a doomsday sign for Black Friday actually being black, but we enjoyed it nonetheless. The hardcores had obviously already gone home to nap, and the crowds that were left was a fascinating mixture of of Amish people and foreign tourists.

Although I was a bit puzzled at what the Amish people were buying at the outlet mall, the foreign tourists were the most entertaining. I mean – it’s BIRMINGHAM, people – I love it here and all, but… who mixed up your airline tickets??

There was the woman in Gymboree…yelling at her kid in, after I studied intently for a moment, what I convinced myself was Slovak.

Then there was the Chinese Mom tormenting her tween son. She was in full tourist get-up (it makes me happy that us Americans aren’t the only ones who sport such looks), desperately trying to take her son’s photo.

First at the cement benches. He sat with his head buried in his lap, as she waited patiently from ten feet away, camera aimed, knees bent, smiling and coaxing, button on the trigger, ready to snap the world’s most boring photo.

(I awkwardly tried to figure out how I could pass them without potentially making her miss her shot.)

Then we spotted them again, an hour later, this time with him posed in front of the outdoor Christmas tree, looking as mortified as if his underwear was hanging on the massive fake spruce behind him.

Then AGAIN a half an hour later, looking just as thrilled about his latest photo-op in front of the waterfall.

I mean, I love our outlet mall and all, but it’s no Lady Liberty or Mount Rushmore.

But, if Ali had asked us to take her to see Lady Liberty that day, we probably would have cheerfully agreed – after allowing her to stuff her face with more high fructose corn syrup.

So how about you? What’s your Black Friday philosophy? Did you drown in the maddening crowds, or stay at home and scoff in their general direction?

30 thoughts on “The Black Friday Buzz.”